My blog page has been very quiet over the last few weeks.  As usual there are any number of excuses I could dish out, but the one I am going to stick to this time round is the sad fact that there has been very little of excitement from a biodiversity point of view.  Don’t get me wrong, the Buckham household very seldom suffers from being bored, but I have had little to show in terms of birds, frogs and reptiles.

The last three weeks have been the mid-year school holiday.  Unfortunately I was stuck at the office for most of the time but we managed to farm the kids off to Plett for the duration of the holiday and made sure that we spent a long weekend or two in Plett to spend with them.

Since we have spent many of our holidays in Plett as a family we have trawled most of the best birding spots and there are few nooks and crannies that we have not unearthed.  The two weekends we spent there were therefore relatively quiet.  Adam and I did spend a morning in the forest at the Garden of Eden trying to unearth a Plain Rain Frog but with very little luck.  A Terrestrial Brownbul was just about the only photo I managed to take. 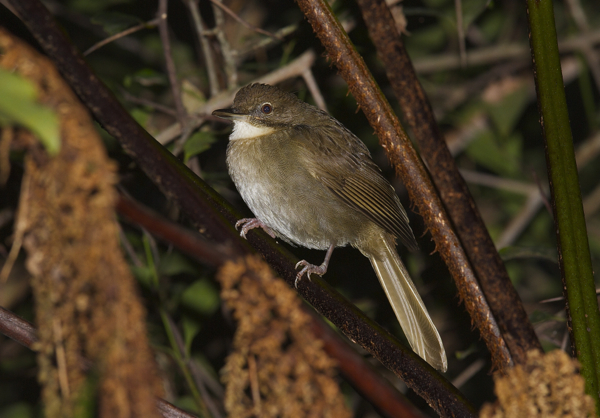 The sewerage works nearby the Old Nick are always very well worth a visit and despite not getting too many decent pics we did have quite a few good Western Cape birds at the entrance to the works just behind the Old Nick.  In the space of about 30 seconds we had two rarity sunbirds in Grey and Collared, a pair of Lazy Cisticolas and a darting Tambourine Dove.  Interestingly, the Grey Sunbird has been regular in the area for a while now but the Collared Sunbird has suddenly taken on the same status with a lot more of them being seen further west.  We have seen them a few times at Nature’s Valley but I had several sightings in the Plett area over the last two weekends.  As for Lazy Cisticolas, they have become very regular.  Any bracken or logged patch seems to have them and their wheezing, nasal calls are heard more regularly than any other cisticola in the area at this time of year.

The waterfowl at the sewerage works was run of the mill but I got a chance for a few decent flight shots. 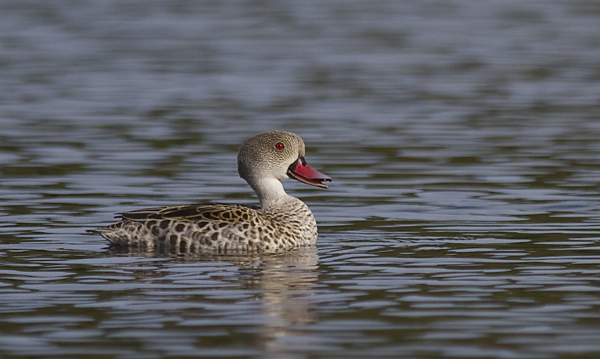 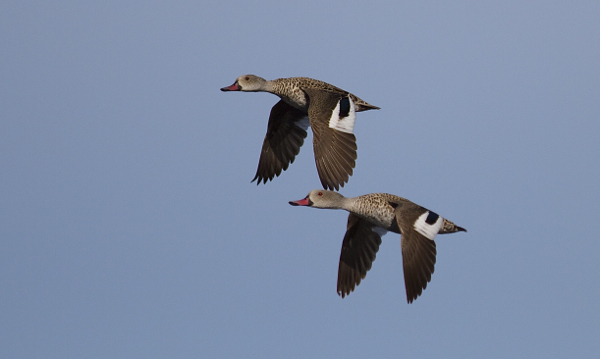 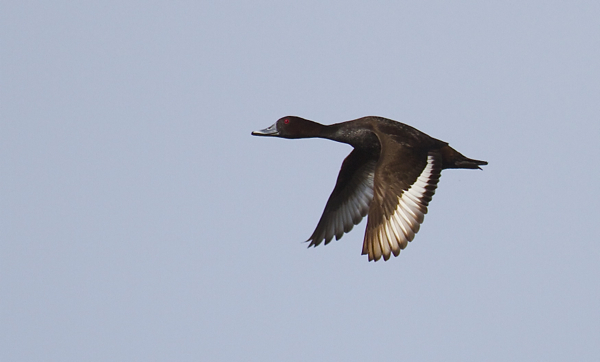 My mother-in-law lives on the edge of the Robberg Nature Reserve and it is a great place to be.  The birding, however, is a little scant and Adam, Jack and I discovered that the herping is just as thin on the ground.  We spent a few hours there one morning and turned over plenty of rocks but found precious little.  Southern Rock Agamas and Red-sided Skinks were just about all we found and on the bird front all we got was a few obliging Orange-breasted Sunbirds. 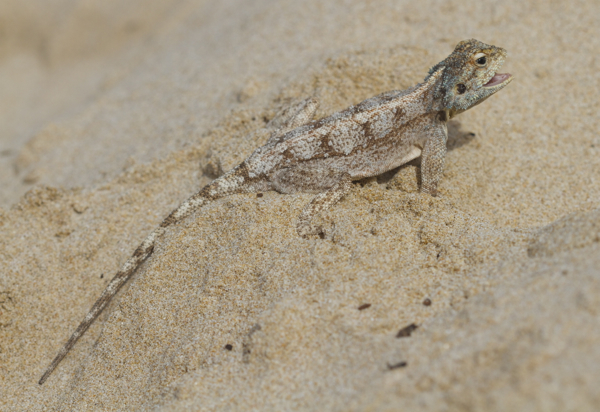 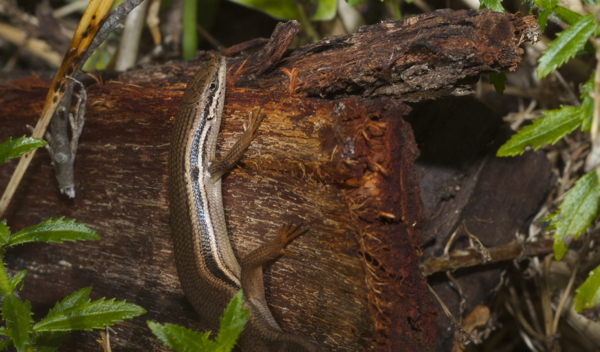 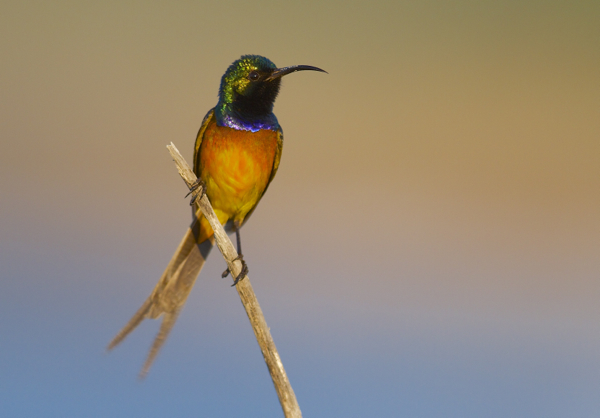 A bizarre sighting on one afternoon on the peninsula was a flock of about 15 Greater Flamingos which seem to be pretty much all over the place at the moment.

The most rewarding aspect of Robberg for me, during the short break we had, was a trail run with Tommy from the house to the point and back.  As Tommy gets older his fitness is getting stronger and although he needed a bit of prodding he did amazingly well to cover the 4.5kms to the point and the same distance back without too much stopping.

The one exploratory birding trip that we did was on the back of John Graham’s Western Cape extremity search a few months ago.  John had spent some time on the furthest eastern portion of the Western Cape near the Bloukrans Gorge searching for some good Western Cape birds.  I had pestered John for some of his GPS co-ordinates for birds like Golden-breasted and Rock Bunting and armed with those I took the boys out there on our last morning.  The area is run by SANParks but it is mostly plantations of pine on the plateaus above the ocean and to the west of the Bloukrans Gorge.  The area we worked was mostly felled plantations and once again Lazy Cisticolas were the most regular bird in the area.  We had a good view of an obliging Jackal Buzzard but the real excitement came with a quartering raptor looking for food above the felled areas. 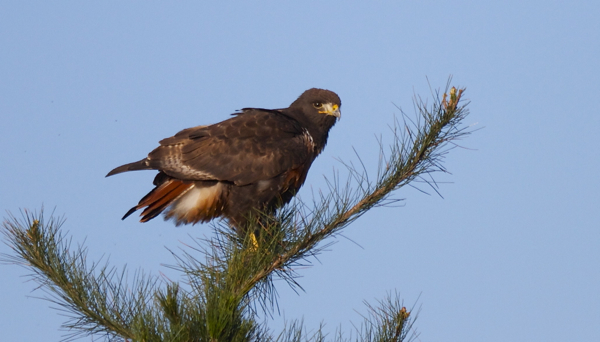 My first view of the bird revealed broad chestnut barring and a bright yellow eye leaving absolutely no doubt that it was an African Cuckoo Hawk.  Lots of shouting to the boys to make sure they got onto it before it wafted over the ridge made sure they got a view of this lifer for them before it drifted out of sight.  Although quite a significant Western Cape bird I have bizarrely seen it 5 times in the province (once near Bloukrans, once at Nature’s Valley, once at Grootvadersbosch and a couple of times in George).  Be that as it may I was very excited to see this one and even more excited that the boys were able to add it to their lists.

We jumped in the car and tracked it down again but views were always a little distant and it was remarkably unobliging for photos. 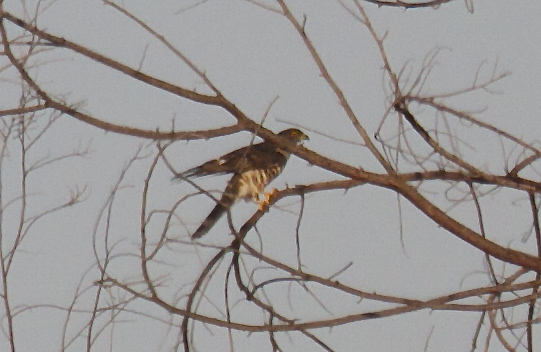 It wasn’t only birding in Plett.  The weather was unseasonably warm and the kids spent some time on the beach doing what kids usually do. 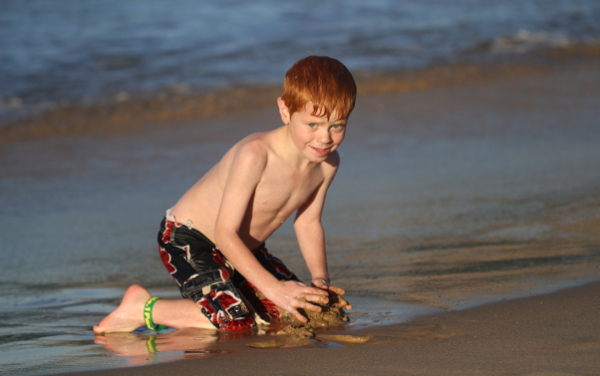 Jack on the beach 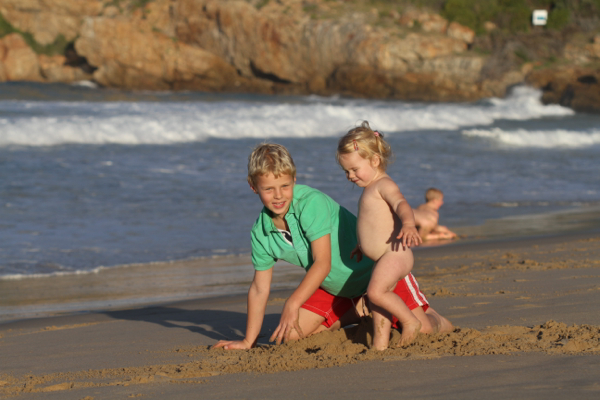 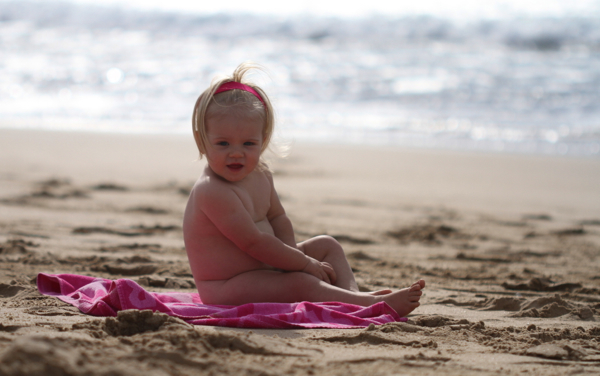 Emma on the beach 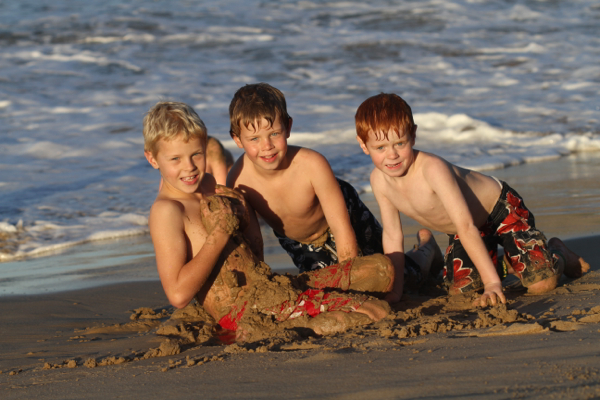 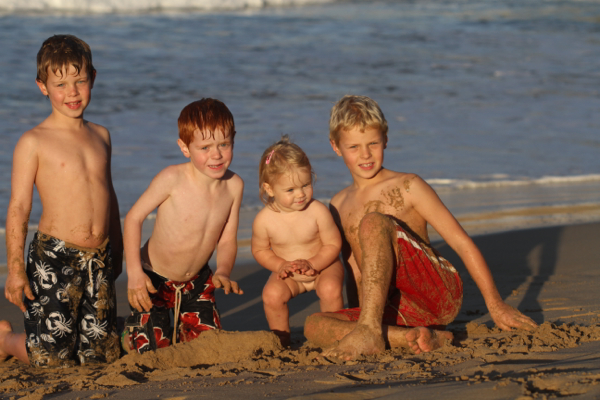 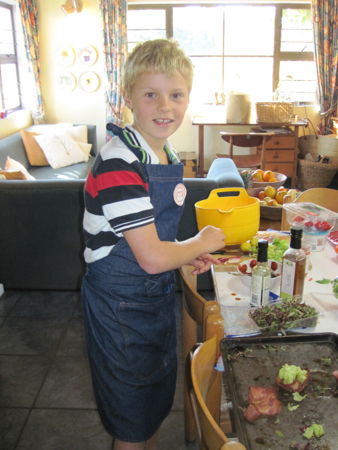 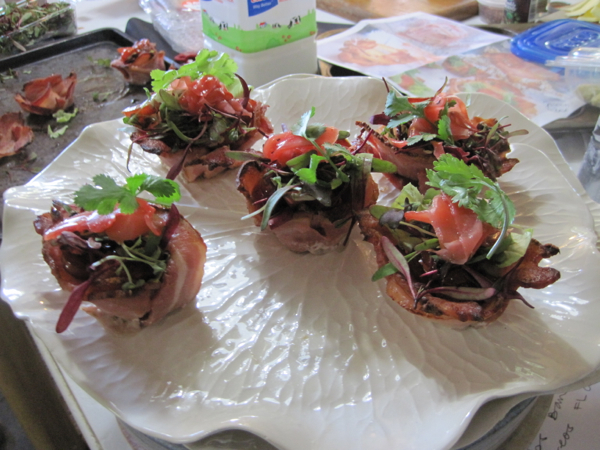 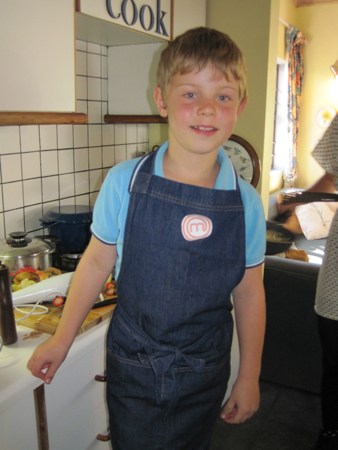 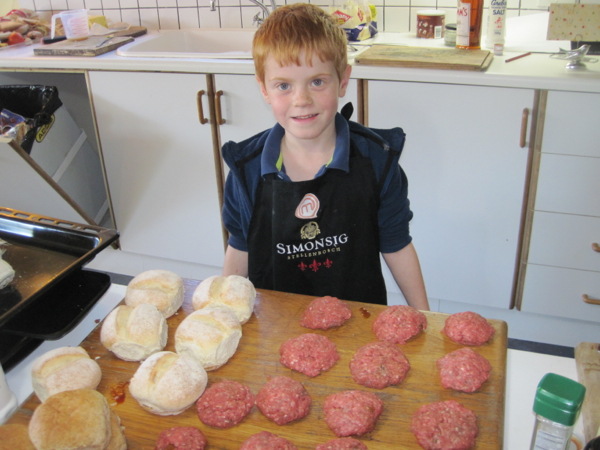 We returned to Cape Town after a good long weekend and then it was back to work whilst the boys hit their various sporting clinics.

Our final bit of field time for their holidays was spent this last weekend in the West Coast National Park.  I took Tommy and Adam out there and we were joined by two good mates who were happy to be exposed to a bit of herping in the park.  I have birded in the park on many occasions and during the last year I have also spent some time looking for snakes and lizards.  I still needed to try find some of the more beautiful and slightly less venomous snakes (having unearthed a Cape Cobra and a few Puffadders on previous visits) and although we turned over plenty of rocks we just never hit the jackpot despite the seemingly good conditions.  Remarkably, we found 4 separate Herald Snakes and as beautiful as these are I had hoped to see a different species as I have seen Herald Snake on a few occasions.  Still, it was a good opportunity to take a few more pics and I have to acknowledge that this photo below was taken by Tommy.  Definitely a lot better than my best efforts. 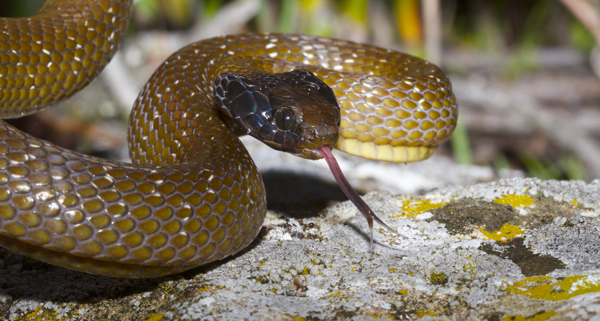 We also found a few geckos and one or two girdled lizards.  The Large-scaled Girdled Lizard was a nice one to see as our only previous viewing of this one was a stone cold one that seemed barely to be alive so did not make for the best photos.  This one was far more active and we spent quite a bit of time hopping around making sure we at least got something to show for our efforts. 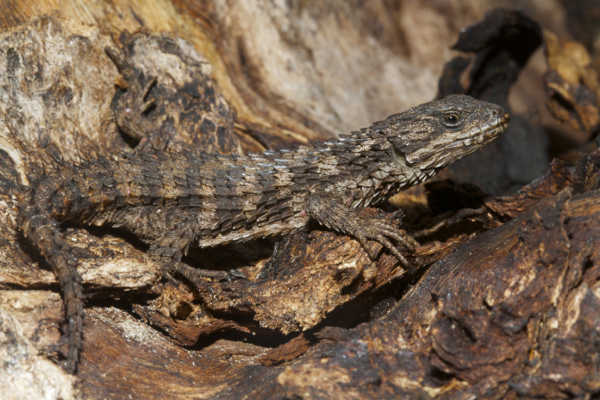 My only lifer for the morning was surprisingly the most common of all the reptiles we saw.  The Karoo Girdled Lizard is pretty abundant in the rocks around the Seeberg viewpoint and just knowing that it was the best place to look was good enough for us to find one.  Not the best photos but it won’t be hard to find them again and improve on what we got on the weekend. 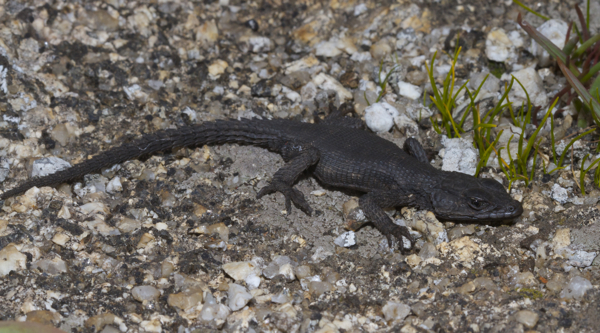 Seeberg hide was just about the only dedicated birding we did and it was nice seeing a large flock (100 plus) Lesser Flamingos and for a bit of entertainment and education was this pair of White-fronted Plovers in a carnal mood.

The male was perched on top of the female for a minute or two and then they both seemed to topple over with the female’s legs thrown into the air whilst the male flapped his wings. 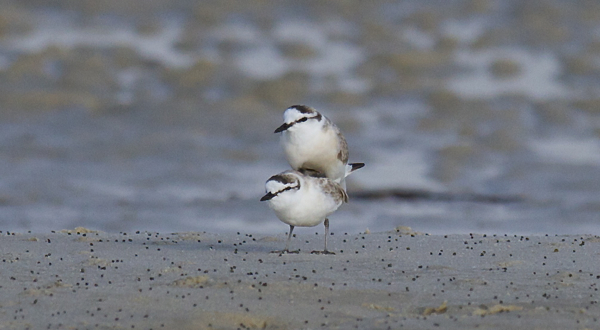 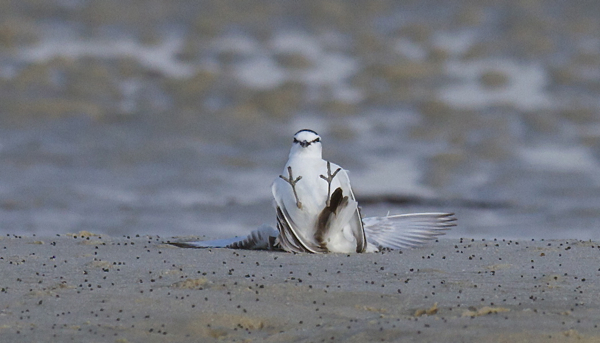 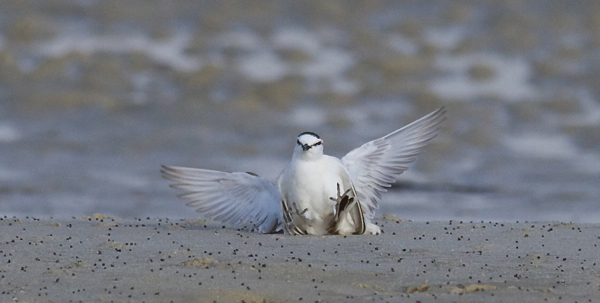 Fortunately the sex education in our family is fairly advanced and I didn’t have to spend the next half an hour explaining the rather bizarre behaviour to the boys.

Well, it is back to school for the kids but I am sure something will turn up in the next few weeks and find its way onto my blog.

One Response to Holiday time