A rainy night for a Rain Frog

Well, it seems as if the frogging bug has bitten quite badly.  Very seldom do any of my birding ventures encroach on my week nights but this week I added another frog to my list.

On a Tuesday night.

I suppose there were a few factors that helped a mid-week frog hunt.  In birding parlance we would call it a twitch.  I’m not sure if one has a name for it in the frogging world but I suppose one could call it a “hop” (he says as all serious herpetologists turn in their graves).

The first factor was a house empty of all my boys.  They were all in George for the first week of school holidays and so it meant a little more evening freedom.  Jeanie was also entertaining an old varsity friend at our house and conversation was likely to be concentrated on relationships and the complexities therein. I was excused from this and I would definitely be taking the gap.  Finally, the weather which ordinarily would have kept me snuggly indoors, was predicted to be appalling.  Drenching rain throughout the day and into the evening.

Once again, a great recipe for frog hunting.

I can now see the appeal – at the first sign of miserable weather there is something to get genuinely excited about.  No more complaining about the cold winter rain. Quite the opposite – the stormy weather is to be embraced.

The target for the evening would be another breviceps species (rain frog).  We had missed out on the Sand Rain Frog in Cape Point Nature Reserve on Sunday where it genuinely seemed like a needle in the haystack but I felt like it was worth a shot for Cape Rain Frog.  It would hopefully be my first species in this amazing family of frogs.

As I have mentioned in previous blogs the breviceps family almost needs to be seen to be believed.  I have seen plenty of pics in books and on websites but I was yet to see one in the flesh.  Sure, they are not the easiest things to see but cold, wet weather would help the process.  From what I had heard the wet weather gets the males calling from their sandy burrows and although one has absolutely no chance of seeing them in their burrow, the calling males get the females excited and travelling above ground to pick their chosen partner.

It would be that theory that would help our cause.

I had put a few feelers out with a few mates during the day but by 8pm I had very few takers.  A few phone calls and SMS’s had a number of “maybes” but no firm commitments.

I decided to apply a little more pressure.

When chatting to Callan Cohen I told him that there were stars in the sky and the wind had dropped.  I did see one or two stars but the wind was definitely still blowing hard.  As keen as I was to see this little creature I was certainly not going to be trawling the habitat on my own.  That would have been just a little too creepy.  It meant that my little white lie was necessary if I was going to have company in taking advantage of these great conditions.

Callan was 50/50.  He was curled in front of a fire reading his book as the rain lashed against the window and the hollow wind whistled through the pines.

I don’t know what did it but at 8:30 Callan was in his car on his way to pick me up.  In fact, perhaps it was the mention of stars that got him to my house but by the time he picked me up there were no stars and the rain was coming down harder than ever.  It was almost a no go but both of us were dressed in our full waterproofs with R65 wellington boots pulled over our feet.  If nothing else, we were prepared for the worst of the weather and we weren’t going to be stopped.

We first tried Newlands Forest and that was a complete washout.  Literally.  The rain had not abated but Callan kept things positive by suggesting that our chances were good as the frogs may be washed out of their burrows.  It sounded like a stretch but I was still committed.

It didn’t take long before we decided that the one person that we should take advice from was Cliff Dorse.  When Cliff tells me something about a frog I am realising fast that it needs to be believed.  It had been enough “hit and miss” and it was time to take things seriously.  Cliff had given me some relatively reliable gen for a spot in Tokai Forest and soon enough we were barrelling down the Blue Route towards Tokai.

The strategy would be to drive slowly along the suggested road and look out for the rain frogs on the edges of the road or possibly even crossing the road in front of the car.  It really sounded a little far-fetched but Cliff told me that the best chance to see a breviceps was like that and not trying to home in on the calling males which had been my initial naïve approach.

So, we arrived at the very beginning of the road and I said to Callan that we should be keeping our eyes peeled.  Callan had seen many of the tropical breviceps species in Mozambique and he regaled me with tales of hundreds of them congregating on the wet gravel roads during tropical thunderstorms so he knew what we were looking for.  Despite this he was very conservative about our chances in Tokai.

It was a great shock to both of us then that, immediately after making my comment about keeping our eyes peeled, we both simultaneously noticed this little ball in the middle of the road.  We had no time to think before we both shouted: “there’s one!”

It seemed too good to be true but for fear of losing it I jumped out of the car immediately and went to make sure that it was not a eucalypt seed pod that we were seeing but, clear as you like, there was a Cape Rain Frog sitting in the middle of the road.  Within 30 seconds of starting our search it was abruptly over.

I needn’t have feared that it would disappear quickly as it had blown itself up as much as it could and it was so bloated that its legs were elevated above the ground and it could barely move.  It seemed a poor defence mechanism and gave me some inkling of how many of these poor animals get decimated on the wet roads of Cape Town every night.  In fact, there was a dead toad right next to the rain frog which looked like it had missed being saved by us by a few minutes.

I gathered the little frog in my hand (about the size of a golf ball and a similar shape too) and took it to the side of the road where we set about photographing it.  The rain had stopped now which allowed us some freedom to snap away but it must have been a strange sight with the two of us lying flat on the ground at 10pm photographing what must have looked like wet grass.  We were just outside a security estate and there was quite a lot of traffic in and out but I am pretty sure no one was taking a chance to stop to ask us what we were doing.  I think the assumption may have been that we were Pollsmoor escapees and we were better left alone.

It is hard to describe the feeling of finding this little thing.  It doesn’t sound like a big deal, particularly since we found it so easily, but it really is a special thing to see.  It is a Cape endemic and as Callan said, their ghostly croak is something that epitomises the winter nights in Cape Town.  It evokes similar emotions to the call of a Fiery-necked Nightjar in the bushveld or a Wood Owl in an Afro-montane forest.  Despite the fact that these things are all around us, I am sure there are not many of us that have seen one. 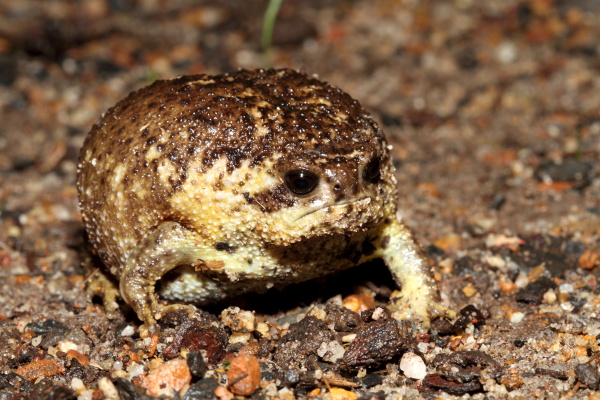 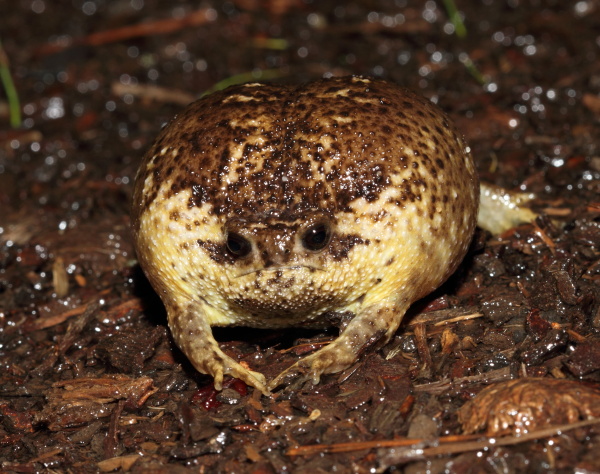 As you can see from the photos it is the most incredible looking thing.  I just cannot get enough of that grumpy face and that bloated body.  It just seems unfair that one animal is cursed by such unappealing features.

When showing the photos to Jeanie she asked me whether there was anything that could make the poor thing smile.  She even wondered whether the eventual sexual encounters produced any sort of improvement in the grimace. I had to explain to her that rain frogs have a very strange mating procedure whereby the male “glues” himself to the back of the female and then they spend a long time in an inseparable embrace which culminates in the female laying eggs which are fertilised by the male.  Perhaps this seemingly never-ending mating procedure is the exact reason they look so grumpy (once again my sincere apologies to the purists…and my wife).

Once our adrenaline levels had returned to some degree of normality we decided to drive the rest of the road that we had planned to spend considerable time on, looking for the rain frog.  It didn’t disappoint.  We soon found a Western Leopard Toad hopping across the road and it once again amazed us how these endemic species are all around us if you just look. 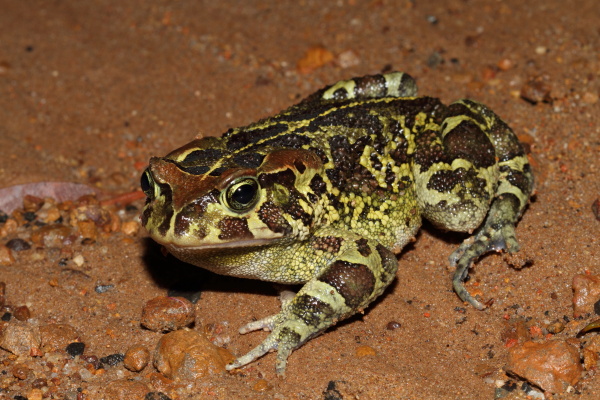 My squeamish levels are slowly improving.  Picking up squirming frogs is a bit of an acquired taste.  I seem to be a little better with the little ones having had no problems with the Cape Peninsula Moss Frog and most recently the Cape Rain Frog, but now I was faced with a completely different prospect with this relatively enormous amphibian hopping around me.  Things didn’t get any easier when Callan mentioned the poison glands behind the eyes (it is important to note that the poison needs to be ingested to have any effect – toads are not poisonous to the touch nor can they give you warts).  From that moment onwards I was just an observer as Callan picked up the toad and moved it to the side of the road where we could take some pics.

It is amazing how one suddenly sees those wonderful colours in the brightness of the flash.  As much as Jeanie won’t agree with me it really is a beautiful frog.

We rounded off our amphibians for the night with a rather spritely Clicking Stream Frog which eventually sat still for a minute or two while we got close enough for one or two pics. 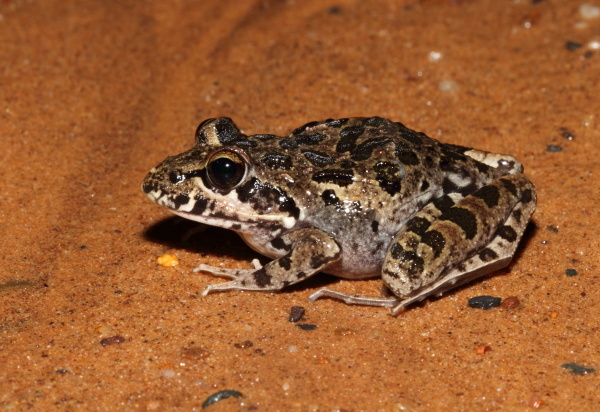 It was amazing to tick three frog species in a short space of time and we added Cape Mountain Rain Frog as a 4th species but this one was only heard and it was getting way too late on a week night to be turning logs over to find this one.  That will have to wait for another time.

Just to make sure that the evening wasn’t all about frogs the resident Spotted Eagle Owl up at the arboretum posed beautifully next to the car and even allowed for a photograph with my 100mm macro lens. 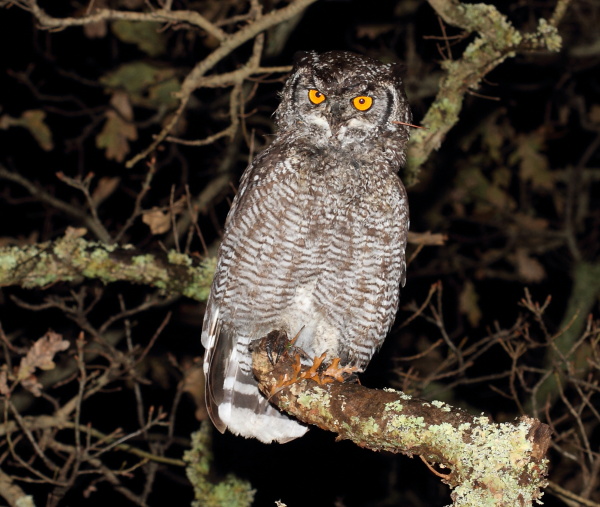 One Response to A rainy night for a Rain Frog