This last weekend we decided, as an entire family unit, to visit my parents in George.  They live at a golf estate and my father was desperately keen to get Tommy and Adam onto the golf course with him.  With the possibility of doing some atlassing and general birding in a different part of the country it was not hard to agree to flying up for the weekend.

It was Emma’s big moment as well.  At the very young age of 3 months she has not expanded her horizons that much so it was with great excitement that she boarded her first aeroplane, albeit for a very short flight to George. 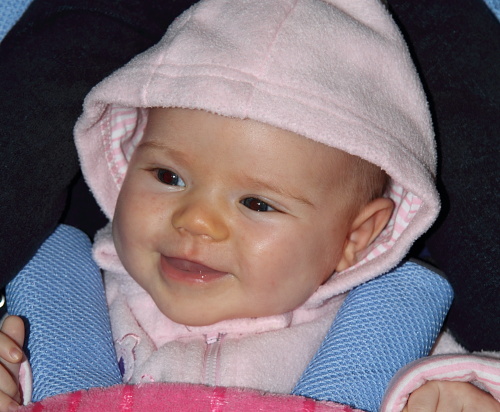 My original birding plans for the weekend were to spend some time at the Wilderness vleis and pick up a few waterbirds as well as add some species to Tommy and Adam’s lists but my father mentioned an outing to Voelvlei near Vleesbaai and it was hard to argue against that, despite the slightly lengthier drive in getting there.  Voelvlei is a low lying area north of Vleesbaai which is a small coastal village situated about 30kms south west of Mossel Bay.  Voelvlei is a birding spot that is very dependant on the prevailing conditions and in some years there is very little water whilst in others it floods making access particularly difficult.  Our timing was perfect with enough water to harbour an enormous selection of birds but not too much as to make access difficult. 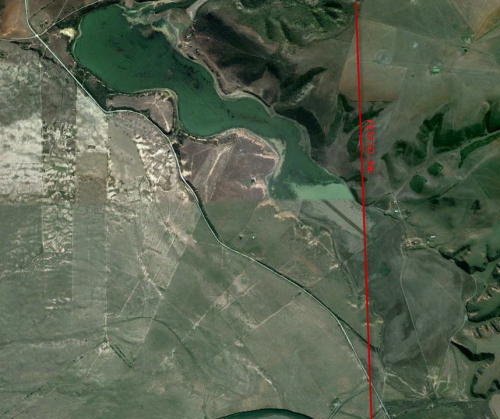 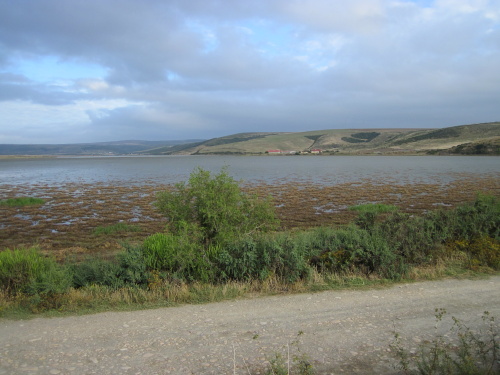 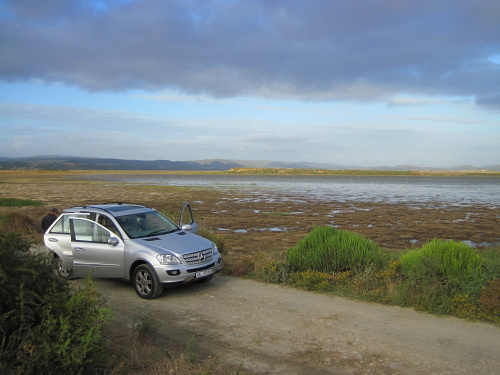 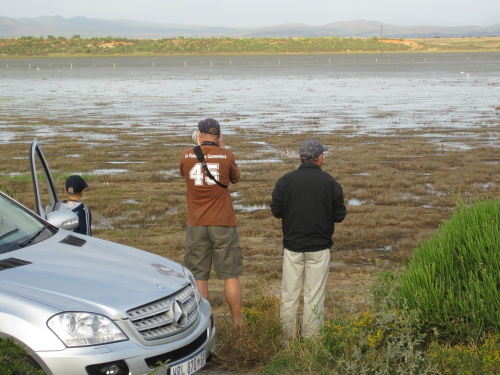 Voelvlei is split more or less by a pentad line running from the south through to the north and it is interesting to see that although there are around 100 cards submitted for these two pentads, it seems as if there are relatively few observers that have spent any time in this area (with a huge number of repeats by one or two birders).  This is quite a surprise as I have seldom encountered a richness of bird diversity as well as sheer abundance as one can find at Voelvlei.  We atlassed 3415_2145 and 3415_2150 which are the two Voelvlei pentads and we reached 50 species for both of these within the first hour.  The vlei is literally crawling with Herons, Egrets, Ibises, waders and waterfowl and there is a constant shimmering of silver wings over the vlei as hundreds of Whiskered Terns patrol the surface for their daily pickings. 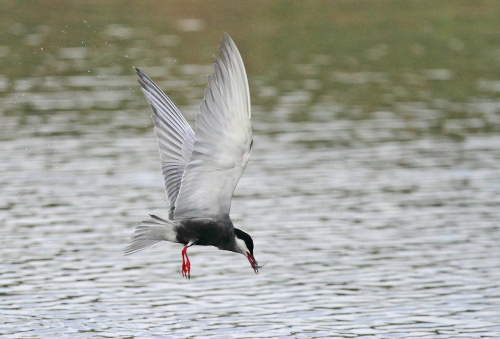 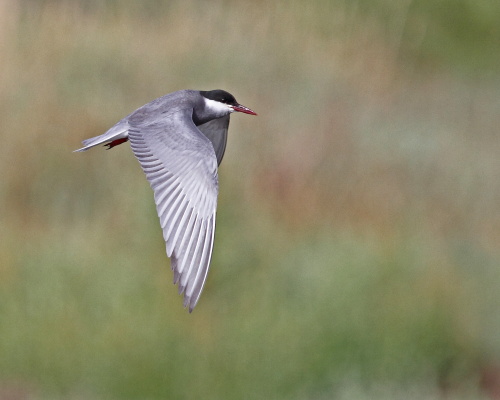 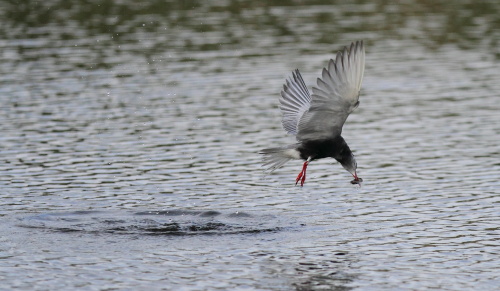 If this blog achieves anything perhaps it will encourage birders to make a little detour from the N2 and head south for 20 minutes to reach this abundance.  I suspect there are plenty of wader rarities to be found on the margins and the photographic opportunities are also plentiful.

We spent about 3 hours driving slowly along the eastern edge of the pan and in that time we barely made it more than a quarter of the way around the vlei.  Having said that, it is unlikely that it is necessary to do much more than that as there is plenty to see in that easily accessible section. 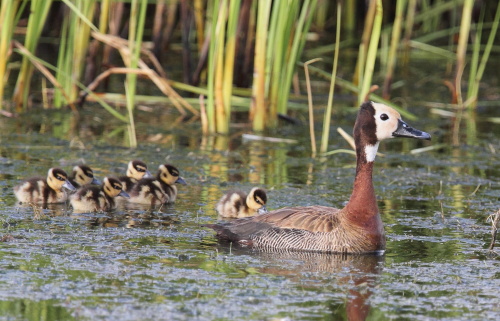 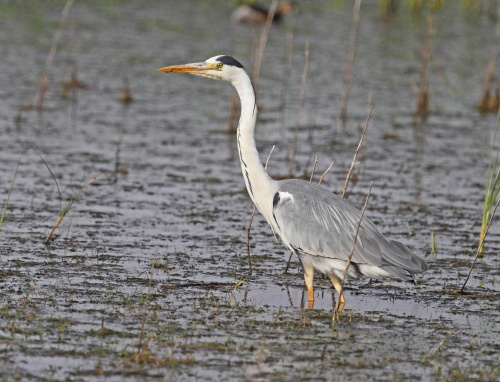 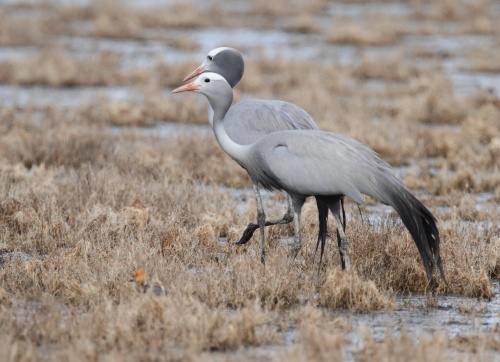 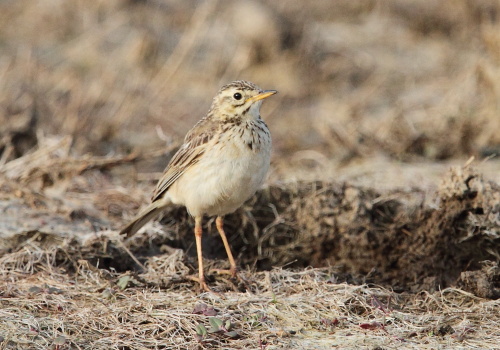 Interestingly the most notable bird of the morning wasn’t a waterbird but rather a Jacobin Cuckoo which is a particularly tough Western Cape bird.  Although I had only seen it on one previous occasion in the province it was a bird I was hoping for from the area as there are regular records of it from Vleesbaai and surrounds.  It was also a full lifer for Tommy and Adam which certainly kept them satisfied.  Unfortunately it was being harassed by other birds and it did not stick around to be photographed.

Aside from the vlei we spent some time in a few other habitats and a wooded valley just off the road to Albertinia gave us a few other options.  The bird we were looking for with the greatest degree of intensity was a Tambourine Dove.  We had heard a pair calling in Paarl the previous weekend but it was virtually impossible to find in the scrappy woodlands and the higher density of birds in the chosen valley meant our chances were a lot better. 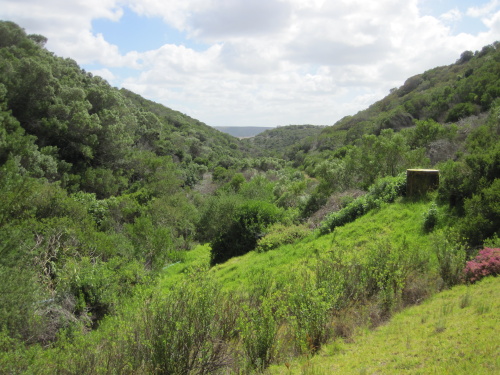 “Tambo” as we affectionately call this beautiful dove is a tricky one to find in the best of circumstances.  It spends most of its time low down in riverine valleys, generally concealed quite substantially by thick scrub.  It is best seen as it flushes from the undergrowth and high-tails it low over of the bushes.  Its pearl-white belly is easily seen as it twists and turns in its explosive flight.  Its mournful call is easily heard in the right habitat and this valley we were in was perfect.  There were calling birds everywhere.  Now it was important to try lock onto one as it flushed.

I managed to flush one bird but Tommy and Adam were trailing and they missed it.  The second bird that was flushed hurtled out of the bushes and flew in full view in front of us.  I wanted to make sure Tommy and Adam were onto it and in so doing I grabbed Tommy by the shoulder and shouted:

As it dived back into cover I looked down at Adam and asked him if he had seen it.  “yup…I saw its white tummy as it flew away”.

I then looked down at Tommy and asked him if he had seen it.  The poor child had got such a fright as I had shouted that he had burst into tears and had missed it completely.  I have to admit that I felt pretty bad about the whole episode.

There were a few more flushed Tambos but it was quite some time thereafter that Tommy eventually got his satisfactory view.  It was a great relief to all of us.  To add to the compensation for his maltreatment I managed to find a very skittish Knysna Woodpecker close to the path and as it flew across the valley in typical whirring woodpecker fashion, the whole clan got onto it and it was yet another lifer for the morning.

Soon thereafter we headed back home to our awaiting family with a carful of satisfied birders.  Definitely a trip to be repeated in the not too distant future.

The birding for the weekend was not quite over.  Tommy, my father and I spent Sunday morning on one of the Fancourt golf courses where much work has been done to create a natural wetland habitat in between the fairways.  Golf Estates have their fair share of critics and in most cases, justifiably so.  They suck water from the rivers, they have a dominant monoculture and in many cases the chemicals used on the fairways and greens are no good to the environment.  At Fancourt, however, they rehabilitated an old airfield and created a golf course that meanders amongst a network of wetlands that defy belief.  I have spent much time at some of the beautiful wetlands that we still have but I have seldom heard and seen such an abundance of wetland species in such a small area. 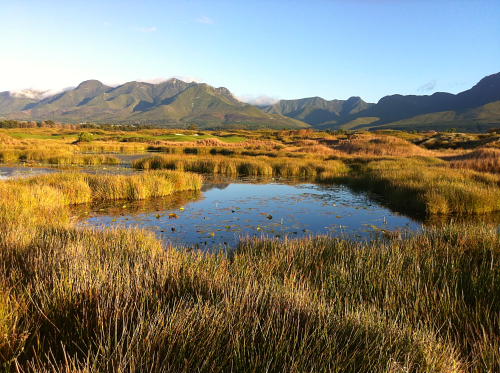 The commonly seen species are generally always available but it is the reed dwelling skulkers that appeal most to birders and there was an absolute abundance to choose from.  African Snipes flushed from everywhere as I walked along the vlei edges.  At one point I flushed 8 separate birds in a distance of about 10 metres.  African Rails were calling at regular intervals and a very busy pair made a nice appearance for a photograph. 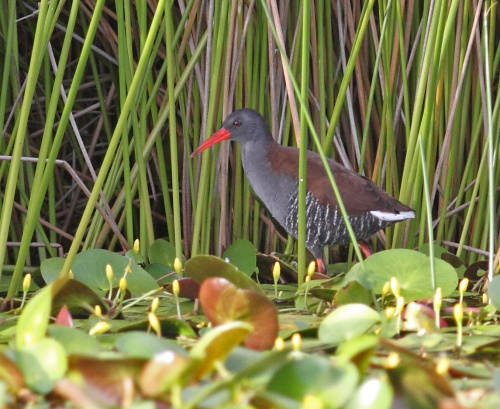 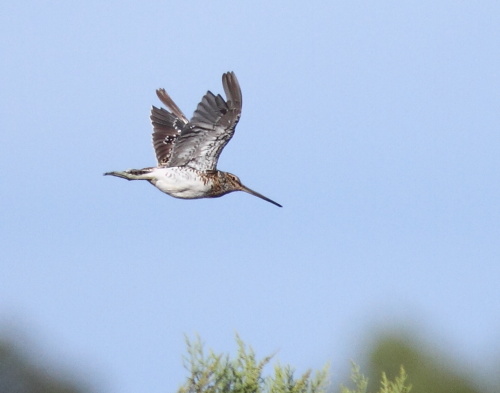 The bird I was most keenly after, however, was a Red-chested Flufftail.  Nowhere are these birds easy to find as is the case with most flufftails but I was hoping we would find a few vocal ones that would give us a chance at a sighting.

We didn’t wait too long before we heard several birds calling from the reeds and sedge.  Unfortunately they were all well concealed and deep in the vlei.  We continued patrolling the various waterways and whilst atop a dune I heard the soft hooting coming from a tiny little vlei amongst the dunes.  The calls I had heard in the other areas were the loud mechanical “tuwi-tuwi” but this particular bird was hooting.  It is a short hoot which gets faster and louder and it was very easy to get close to this particular one.  It almost seemed viable that we would all finally get a view of this most difficult of birds.  I had seen one many years ago in KZN but this would be a lifer for Tommy and my dad.

I decided to take a short and swift walk into the vlei.  I told my birding companions to be ready for the sighting and I trundled into the vlei.  Within seconds a beautiful male flufftail burst from the sedge and took a short flight to the other side of the vlei.  Its short little wings flapping frantically with its long toes dangling until it crashed into the undergrowth and was never to be seen again. 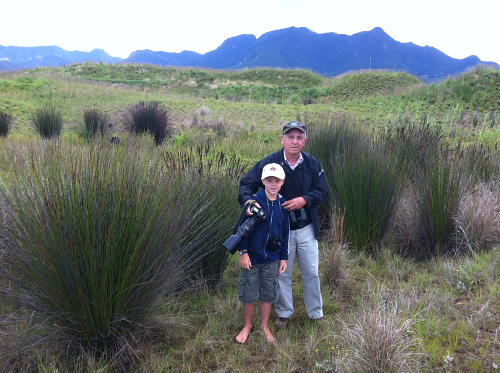 Walking into the vlei seemed to do absolute no harm to the bird.  Within seconds it was back in its original spot and continued hooting with no ill effects from its short little foray above ground.  I turned to look at my father and Tommy, got the thumbs up and the broadest of smiles and a Red-chested Flufftail was finally on their lists. 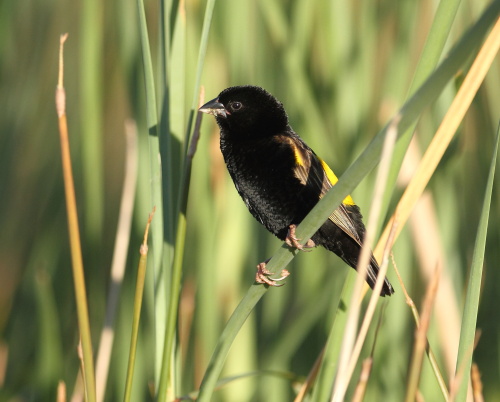 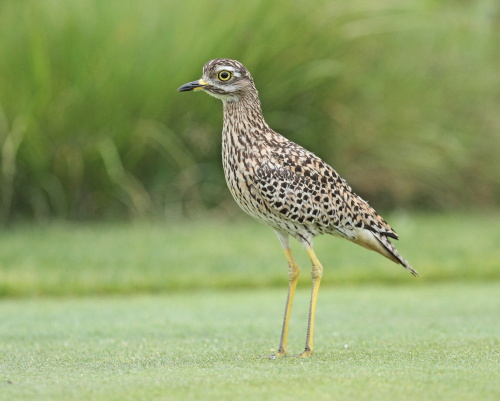 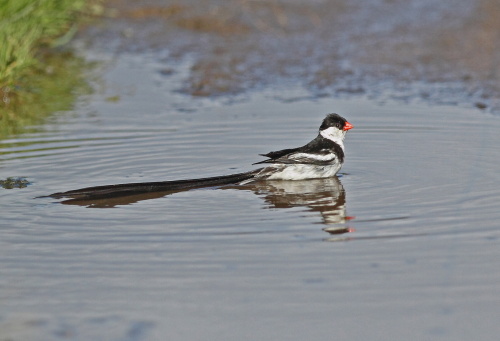 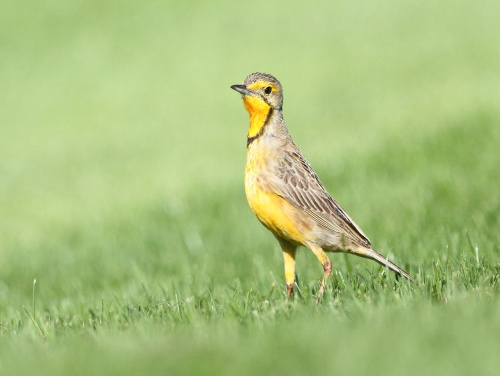 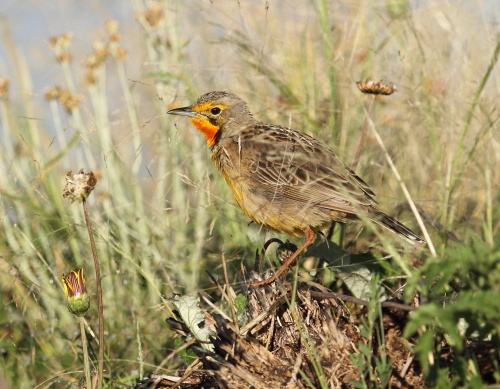 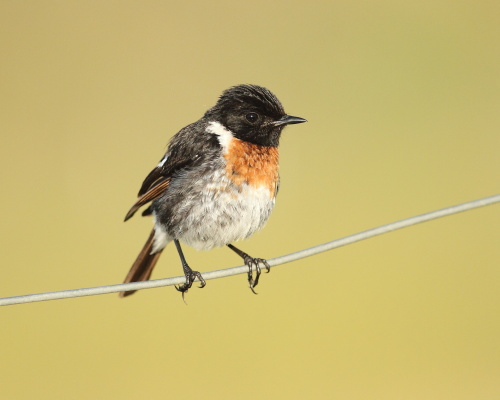 There was one other bird of major interest whilst out and that was a very confusing buzzard.  In Newlands the buzzards we see are, in my opinion, quite well defined between Forest and Steppe.  In Elgin there is considerable confusion as a result of hybridisation between these two species and much work is being done to ascertain the extent of the hybridisation and the source of these “mixed” birds.  The buzzard we bumped into also seemed to be having an identity crisis. 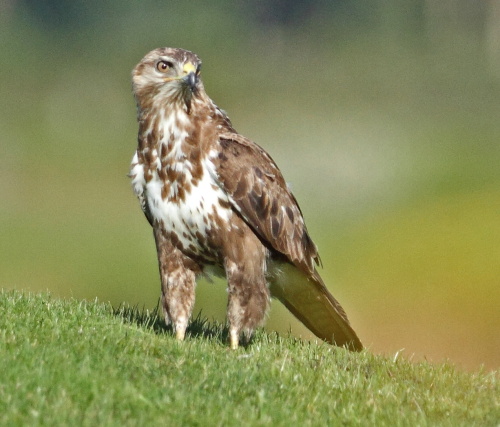 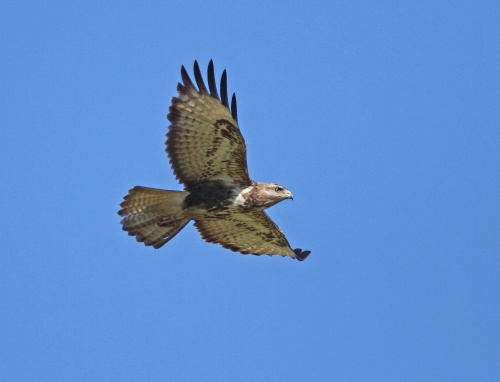 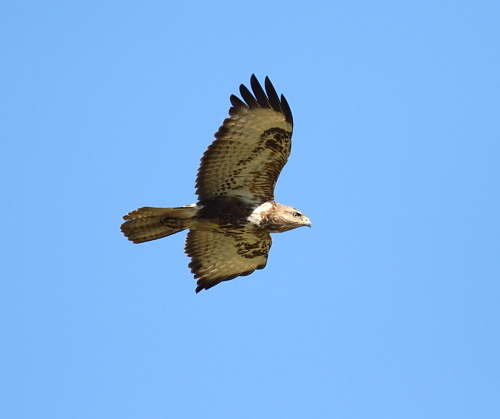 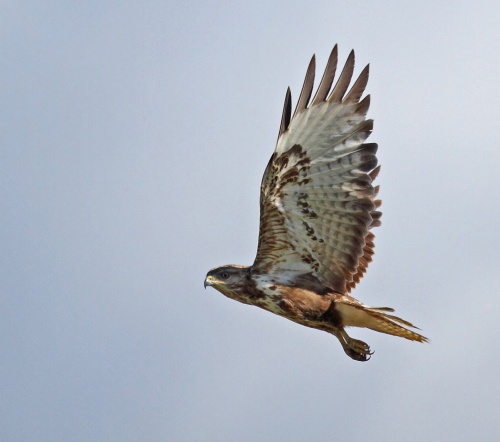 Our first view of the bird was perched on a grassy ridge and my initial instincts were that it was a Forest Buzzard showing a typically pale breast with blotching rather than the barring of a Steppe Buzzard.  I happily recorded it for atlassing purposes as a Forest Buzzard.  It was soon flushed by a golf cart and it was then that I realised this bird would prove more difficult than originally thought.  The pale carpals were not as pale as they should have been and I was suddenly thinking that it was perhaps a very pale Steppe Buzzard.  The fact that it is a sub-adult bird adds to the confusion and following some debate amongst several people “in the know” we still do not have finality.  Indications are that it is a Forest Buzzard but there is a strong possibility that it may be a hybrid.  If anyone has any additional thoughts you are welcome to add to the confusion.

The rest of the weekend was spent doing quite a few non-birding activities which included a bit of golf, cycling and swimming.