The Challenge gets serious (or is that “crazy”)

I was happily tucked into my bed at around 10:45 pm last night when a text message from good birding mate, Frans, came through on my phone. It simply said “Buff spotted calling right now at the top of Hohenort in the Greenbelts if you are interested!”

I was certainly interested as Buffspotted Flufftail was a glaring gap on my Challenge list, but I looked to my right and Jeanie was fast asleep. Having had a few crime incidents in the recent few weeks I didn’t want to be creeping around the house in the darkness searching for binoculars as I was likely to end up being hit on the head with a golf club. I thought it would be best to politely decline a middle of the night twitch.

However, I felt it would be good manners to forward the message to Dave and let him know as well, as it was a bird he still needed, but also assumed he would be cozily tucked into his bed and would plan to twitch it some other night.

The next message that came through from Dave was “I’ll collect you in 10 minutes”.

Now I had no choice. I shook Jeanie awake to tell her my plans to avoid being accosted whilst I rummaged for my binoculars and I told her my crazy plan. She looked incredulous but I wasn’t sure whether it was because she was half asleep or whether she was worried her husband had really tipped over the edge of reasonability.

10 minutes later Dave arrived at the front gate, also admitting that he had dragged himself out of bed, and we drove the short distance to the Hohenort green belt.

Frans was still waiting there for us after I had told him we were on our way. I jumped out of the car and was introduced to Frans’s father, Frikkie. I had never met him before as he had never joined us on any of our other birding excursions, but it is always a pleasure meeting fellow birders in the middle of the night outside the large walls and fences of Constantia homes.

I was impressed Frikkie was there given the rather niche form of birding we were currently embarking on. I was further impressed when I found out that he had never been birding before, and here he was on his first outing looking for a ghost bird.

As is always the case with these suburb flufftails they call from the depths of the undergrowth, most often from someone’s garden where the beds are thickest. There is zero chance of a view but that was not important for the Challenge. This one was no different as it was pumping out its mournful hoot from about 20 metres inside the fence of a private property. I was happy to stand back and tick at a distance but our torchlight definitely got the attention of the property owner and it wasn’t long before ADT was alongside us telling us to be more considerate. These are the risks one runs when doing some commando birding in the suburbs.

After Dave had recorded the call on his fancy sound recording equipment we were saying our thanks and goodbyes to Frans and Frikkie. Frans was actually in the greenbelts looking for African Wood Owl which was a bird he needed for his Challenge list as well as his life list.

So for the next few minutes I was hunkered over Frans’s phone “dropping” GPS pins all over his screen. I was giving him some of my best gen for Wood Owl in the area. Frikkie was looking concerned as it looked like it was going to be a long night. Frans was determined and he was not going home until that Wood Owl was under the belt.

While we were faffing with technology Dave was showing far more appreciation for the night sounds and, in a moment of steely awareness, he managed to hear a distant Wood Owl calling deeper in the greenbelt. All my hard work giving the gen was all for nought – the quarry was right in front of us.

Frans looked delighted but I have to say that Frikkie was even more delighted. His night (and possibly early morning) of driving around the suburbs of Constantia was now cut a lot shorter and relief was washed across his face.

The job was not over yet, though. Frans was not happy for a tick on call for this bird. It was a full lifer for him and he needed a view. There are, however, few things in the South African birding world that are more beautiful than an African Wood Owl and we were happy to be patient for that view. A few hoots from the iPhone was all that was needed to bring the bird a little closer and before long Frans was enjoying the sights and sounds of a new bird for him. It was Frikkie’s first ever bird on his list and we had to make sure he was absolutely aware of how special a first bird this was.  I don’t think it took a lot of convincing given the bird we were looking at. 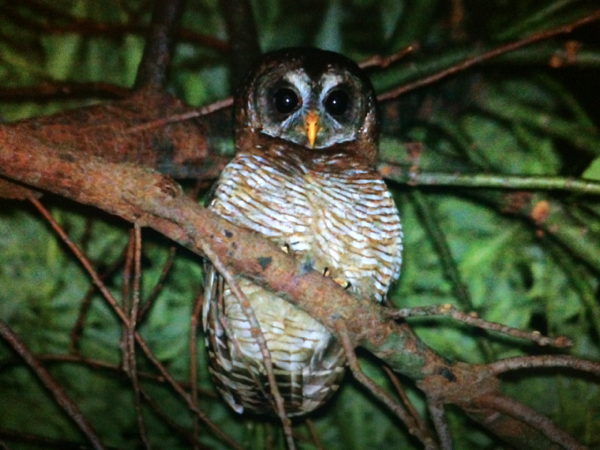 So, at 11:30 we called it a night with a new Challenge tick on our lists and with Frans being rewarded for his determination to find the owl.