I was driven close to madness this week by a Franklin’s Gull. It is a bird that I have seen not once, not twice, but on at least three previous occasions. A veritable trash bird, one would say. The Wider Cape Town Challenge, however, has me behaving very strangely.

But, a message didn’t come through early on Sunday. It came through just as the sun set behind the mountain and all self-respecting Franklin’s Gulls would have been heading off to roost for the day. A weekend twitch was now out the window.

I was, however, not the person most frustrated by the late notification of this bird. My good mate, Dom, was considerably more put out.

“So Dom, you mean to tell us that you haven’t ever seen a Franklin’s Gull? But, we’ve all seen one. Several times.”

It is not like Dom had never tried for this bird, either. Just about any twitchable Franklin’s Gull had been hunted by Dom, but he just never managed to connect.

A bogey bird, for Dom, for sure.

Anyway, when I got the sms from him on Sunday night after he had seen his timeline I could almost smell the fumes of frustration coming through.

He wouldn’t be leaving anything to chance and he would head down in the pre-dawn traffic first thing on Monday morning, but I decided that there was no need to be that urgent about a bird I had seen a few times before. When Dom phoned me at about 9:30am to say he had finally thrown the Franklin’s Gull monkey off his back, I suddenly realised that not only did he finally have this bird on his life list (therefore removing one of his sources of embarassment) but it was now also on his Challenge list. The shoe was now on the other foot.

There was only one thing for it. A lunch time dash from the office.

Strandfontein is not that far away from where I work and I could easily manage it. My camera and bins were in the boot for this eventuality and so I took the gap. Needless to say I did not see it. I rushed between Pan S7, P5, P2 and the pan at the entry and not a feather of a Franklin’s was anywhere to be found. This was far from ideal as it now meant I was committed to getting this bird on my list. Once you give it a first try you have to see it all the way to the end.

So, the next morning I was better prepared. I dropped the kids off at school well before the crack of dawn and stop-started my way through some pretty messy traffic and arrived at Strandfontein at around 7:40. The gull had been seen on pan S7 in the failing light the day before and so I felt certain it would still be there as it was getting light. I would race in, tick it quickly, and then get to the office without missing a beat.

Well, that didn’t happen either.

I arrived at the same time as a few others. Barrie Rose was also there in the half light and he has just about the best eyes in the business so we were definitely giving ourselves the best chance.

It was still a little murky, but surely there was enough light to see that partial dark hood that would separate it from the pale-headed Hartlaub’s. We headed straight to pan P7 and scanned a smallish flock of Hartlaub’s Gulls. No dark hoods. A smudgy dark spot on the head of a juvenile Grey-headed Gull, but definitely nothing close to the hood that I was looking for.

What now? I had limited time and an unlimited number of pans to cover. Was there any point in rushing around Strandfontein to look for this bird? Yes, absolutely. I bade farewell to Barrie and drove off in a puff of dust on my search across the rest of the likely spots. I stupidly failed to exchange numbers with Barrie and boy, would that come back to bite.

I tried all the pans I could think of and quickly reached gull-fatigue. I know it may sound strange to any non-birders reading this (are there any of you out there?) but gulls are quite a difficult group of birds to get a handle on. They are usually quite distinctive in adult breeding plumage but the variation in plumage across the age spectrum, as well as the fact that they have transitional plumage at different times of the year, means that it is one of the trickiest groups of birds to identify. A winter-plumaged Franklin’s Gull shouldn’t be too problematic, though, as we don’t have any other common dark-headed gulls, but it does mean that you have to check the head of every single gull. And since there are literally hundreds of our endemic Hartlaub’s Gulls at Strandfontein, at any given time, it means a lot of head-checking. Hence the relatively quick onset of gull-fatigue.

I did the best I could and bumped into one or two others, including fellow challenger Frans Joubert and uber-birder Pete Ryan. They were all doing their search but they were seemingly not in as tight a time squeeze as I was. I gave it as much time as I could and eventually decided that it was time to go to work.

I was about 10 minutes away from Strandfontein, getting close to the office, when Frans called with the inevitable information that they had found the bird. About three seconds of internal conflict ended with a U-turn on Strandfontein Road and a mad dash back to the sewerage works. I drove a little faster than was reasonable, but time is always of the essence with these things. From a distance I could see several cars parked at the closest pan and that was a good sign. I screeched to a halt and Pete walked up to my car and said in the calmest of voices “no point in rushing now, the bird has gone.”

For those that know Pete, you would know that he has a bit of a dry sense of humour, so I dismissed him and jumped out of the car and headed for the best viewing spot. He repeated himself, obviously thinking I was short of hearing and I had to come to terms with the fact that he was actually not joking. The sheepish look on the faces of Barrie and Frans confirmed that the bird had, indeed, disappeared. It was then that Barrie told me that he had found the gull at S7 just after I left much earlier and such a pity that he did not have my number in his cellphone (drat, that would have saved me a lot of pain). It then flew across to the entrance to the works and that was where I was now standing but, unfortunately, five minutes too late.

I rushed across to S7 again, and then checked in at P5, hoping it had settled somewhere but it was still AWOL by the time I really had to get to the office.

It had been just about the most frustrating twitch I had ever experienced. It reminded me a lot of the time I missed the Collared Flycatcher in Jo’burg. That was a margin of 10 seconds so probably even tighter but this felt just as annoying.

The rest of the week was a no go. I had stolen too much time away from work and family for this stupid bird and I would just have to wait for the weekend.

The biggest benefit to having to wait for the weekend was the fact that I could make my third attempt with Adam, who was on a roll with his birding in the recent few weeks. Tommy was unable to make it, having just finished his rugby match in the pouring rain, but Adam and I were given our pink ticket just before lunch on Saturday morning, and so we grabbed it with both hands. We hadn’t had a report of the gull for at least a day and a half (most probably due to the huge cold front that had passed through the city) so it was a with a fair degree of trepidation that we headed off to Strandfontein.

Adam must be my good omen, as we arrived at S7 and after 10 seconds of scanning it was hard to miss that dark head amongst all the pale ones in a flock of Hartlaub’s Gulls bobbing on the surface of the water. I finally had my fourth sighting of a Franklin’s Gull and it was a huge relief. Adam had it as a lifer and that was just as special. We exchanged a quiet little high five and enjoyed a few minutes of taking a horrible pic or two and then we decided to move on as the rain started coming down in a more urgent manner. 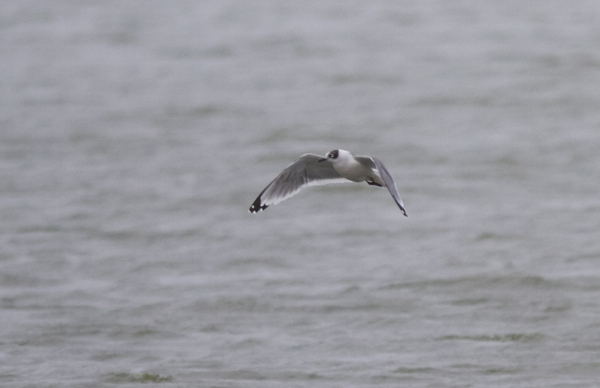 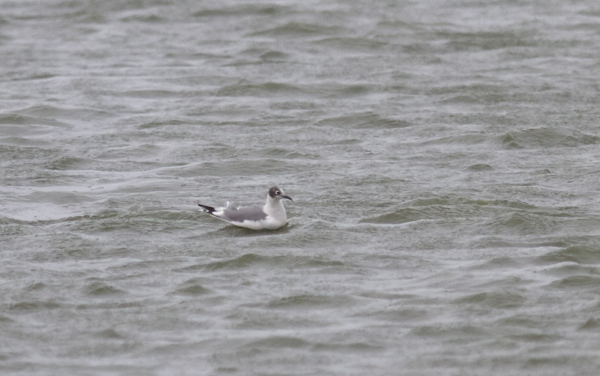 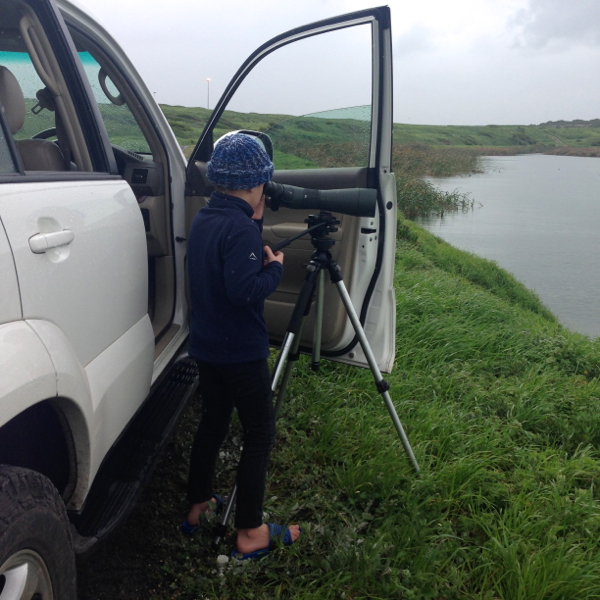 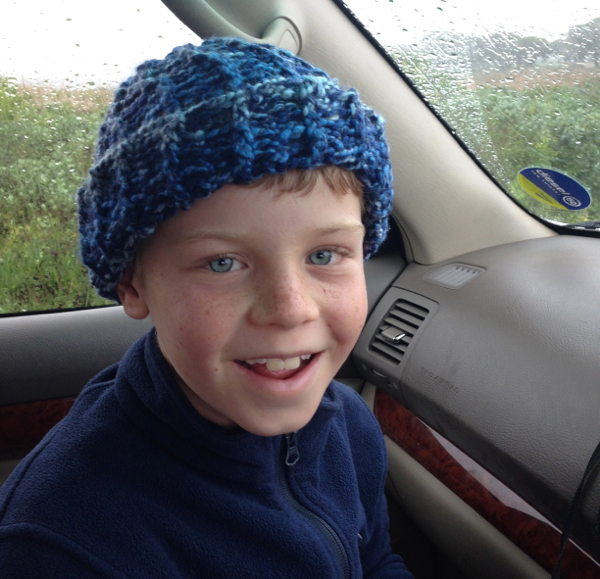 The smile says it all

I had one more task to complete that rainy morning at Strandfontein.

This challenge has provided plenty of ammunition for each of the protagonists in our little competition to have a go at each other. We all have one or two or more bogey birds and we seldom miss an opportunity to engage in some very childish banter about which silly bird is missing from each other’s list. Dom still hasn’t seen a House Crow despite the fact that I have seen one on just about every visit I have made to Strandfontein. Dave happens to be missing not only Cardinal Woodpecker but also Ground Woodpecker.  Both, absolute shockers.

My list of bogey birds is a little longer but one of the most bizarre ones was a Maccoa Duck. I must have visited Strandfontein on at least 10 or 12 occasions this year and I suspect the best place to see a Maccoa Duck (in the country) is probably the first pan on the left as you enter the works. Since I started taking some interest in the challenge I must have scanned the flocks of waterfowl on that pan every time I have been to Strandfontein. I just could not find one. And it is not that they are the toughest birds to identify with their bright blue bill and their submarine-like way of swimming half submerged.

Well, today I managed to knock that one off too. And it was a chance meeting as well. It was a drab female bird (but they all count) and it was doing its best to pretend it was a Little Grebe by mixing in a flock of at least 12 grebes. 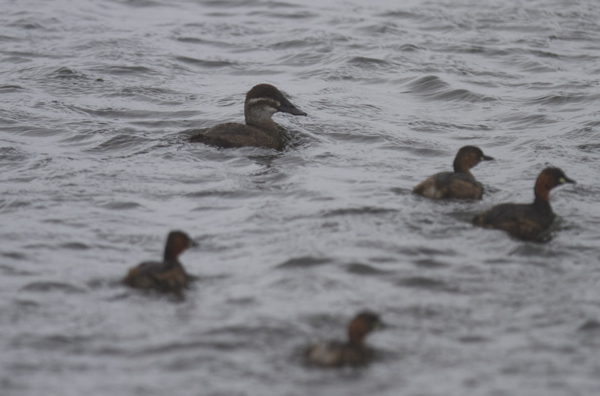 It had been an exceptionally productive visit for a rainy Saturday morning and certainly made up for the disappointments earlier on in the week.

I do question my sanity on occasion and this most recent challenge episode was no exception. I do remind myself on those occasions, though, that I am having a good time doing this with good mates and my boys and it can’t be all bad. My list has progressed very slowly to 245 and I now sit only about 6 or 7 species behind Dave and about 10 behind Dom. I have knocked off my Maccoa Duck but Dom still needs that House Crow and Dave is still woodpecker-less.