A challenge of a different sort

I don’t think anyone would ever accuse our family of being sedentary.  I have been referred to as “Hammie the squirrel” from the movie “Over the hedge” by my good mates and it is unlikely that too many of my offspring would be allowed to stand still for too long either.

We climbed Platteklip Gorge last weekend with the extended family and I decided that, despite our regular activities with our birding, we actually don’t do justice to the most incredible scenery in our own back yard.

So, this morning at 8am, I set off with my three boys from Kirstenbosch top gate and our compass was set for the cable car via Skeleton Gorge and Maclear’s Beacon.  It would be a much bigger challenge than the previous week, especially for little seven-year-old Jack who would be seriously pushed over such a big hike.  I had plenty of faith, though, as he had made short work of Platteklip the week before. 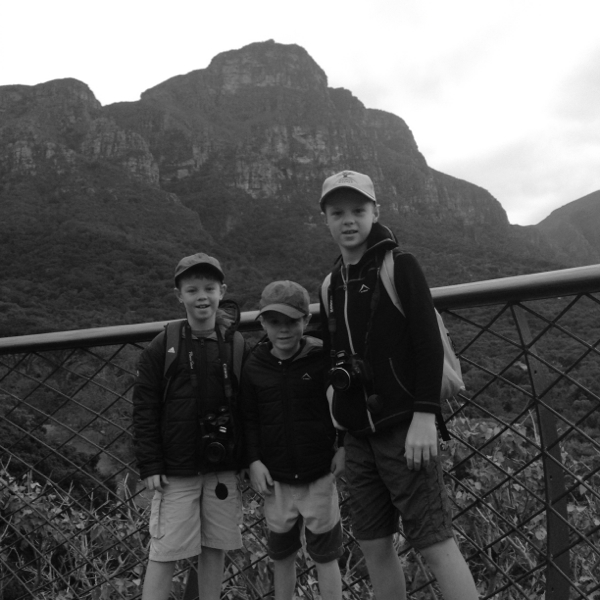 On the Boomslang with Maclear’s in the background

We had to make a stop at the Boomslang, though, as I still needed an Olive Woodpecker for the challenge.  It was probably my most obvious dopey bird outstanding and, despite about 10 visits to its favoured haunt at the Boomslang, I had still not seen or heard it yet this year.  It was early morning and the gardens were quiet and I felt we had our best chance.  I didn’t want to spend much more than a few minutes looking for it, though, as we had a long way to go.  Fortunately it had read the script very obligingly and it was easy to see as it worked its way up the trunk of a tree right next to the boardwalk.  It would have made for some awesome pics but unfortunately my camera was snugly packed away in my backpack in preparation for the hike up the mountain.

We were soon on our way proper and it wasn’t long before we had left behind the lower slopes in the gardens and it was going to be uphill for a very long time.  We were starting at 130m and we had to get to 1087m at Maclear’s Beacon.

About half way up Skeleton Gorge, shortly after the tricky slippery ladders and boulder clambering in the river itself, we were joined by a guy that was a dead ringer for Arnold Schwarzenegger. 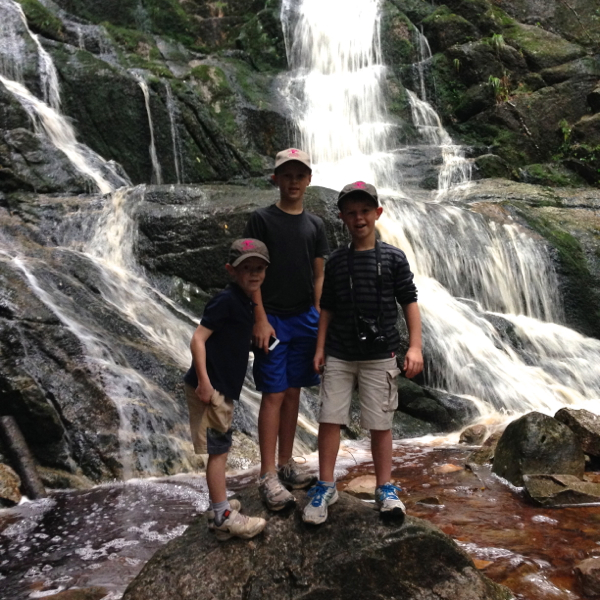 The waterfall in Skeleton Gorge 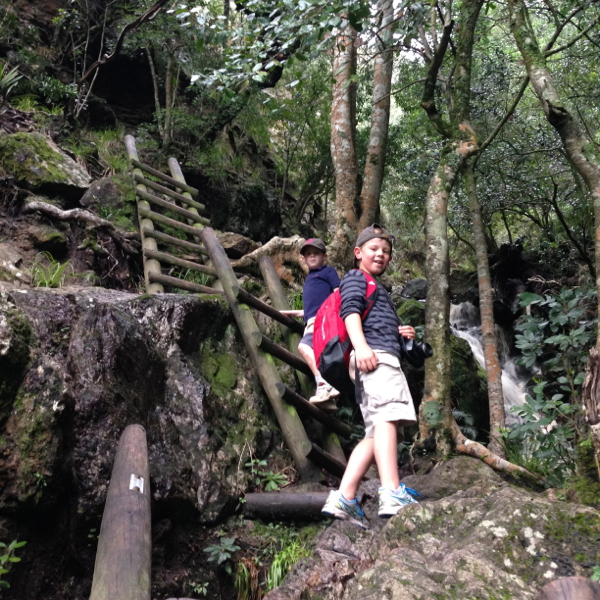 Perhaps not so much in absolute appearance, but he was in his 70’s, he was pretty well built, a chiseled jaw and if you closed your eyes when he spoke I reckon if he had said “Asta La Vista, Baby” you would not have been able to tell the difference between him and the original.  In fact, after a few minutes I asked him if he was Austrian as his accent was so distinctive.  He was quite impressed that I got it right and he had a quiet chuckle (appropriately deep and hoarse) when I mentioned the link to Austria’s most recognizable celebrity.

He was a very interesting man who had lived in SA for almost 50 years and was a passionate hiker.  He told us that he has walked up Skeleton Gorge every Sunday for the last 40 years.  He was impressed that my three boys were making their way up the mountain but I made sure the boys knew that what he had done was far more impressive.

We parted ways at the top of Skeleton and the four of us went right towards Maclear’s whilst Arnold went left towards Constantia Nek. 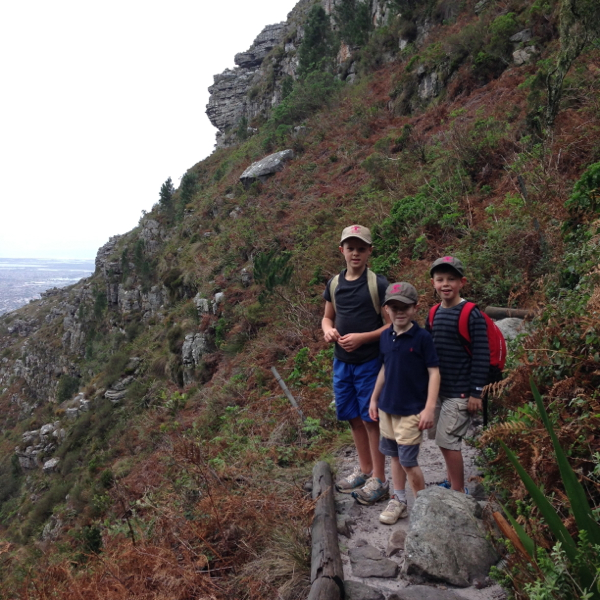 At the top of Skeleton Gorge 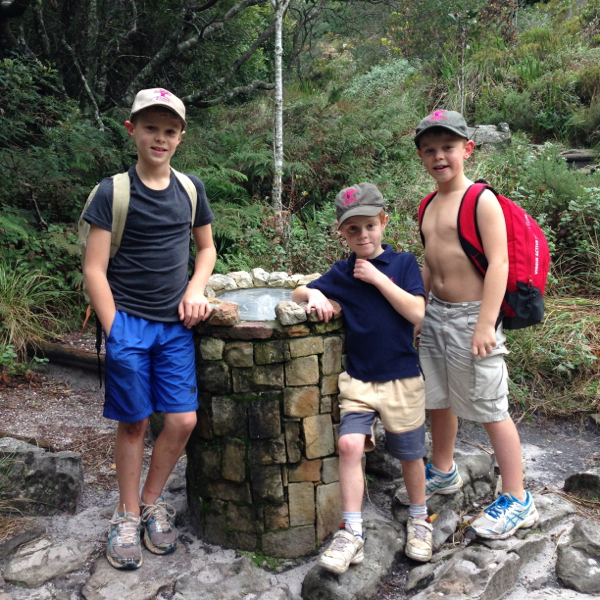 The trail emerged from the damp forest at the top of Skeleton and then wound its way through the fynbos for the remainder of the walk.  I had hoped to catch up with two specific species for the Challenge in these phases of the hike.  The first was Knysna Warbler which has become virtually extinct on the Peninsula, but there are rumours that there is a remaining pair in the bracken at the top of the gorge.  It was disappointingly silent this morning.  I suspect the season is a little early but all does not bode well for these secretive endemics.  I see there are currently three records for Knysna Warbler for the challenge and I do wonder where those came from, as it is a bird I know well from many years of living in Newlands, and it is saddening to have lived through the steady disappearance of this species from Kirstenbosch and the Constantia and Newlands Greenbelts.  I have advocated strongly for the recording of species in the challenge on call alone for this species specifically, as the last thing we need is for springtime to reveal a calling bird and for 75 challengers heading out and drilling the tape for a sighting.  Anyway, there was nothing for us this morning and I will definitely be trying again in the spring proper.

The next bird on my target list was Striped Flufftail.  This is yet another bird that requires the use of call alone for its recording on the challenge list as it is another one that will most likely take a hammering when a site is discovered.  I was really hoping to find a vocal bird this morning as it would mean that those that wanted it for their lists would really have to do the work – a climb to the top of skeleton and across to the aqueduct would certainly qualify the observer for their tick.  Like for the warbler, though, the season is a little early, but we were going to be walking through so much perfect habitat that I hoped I would hear their rattling call somewhere in the fynbos.  Alas this one was also completely silent and it meant we were left empty handed on two of the tougher birds for the challenge. 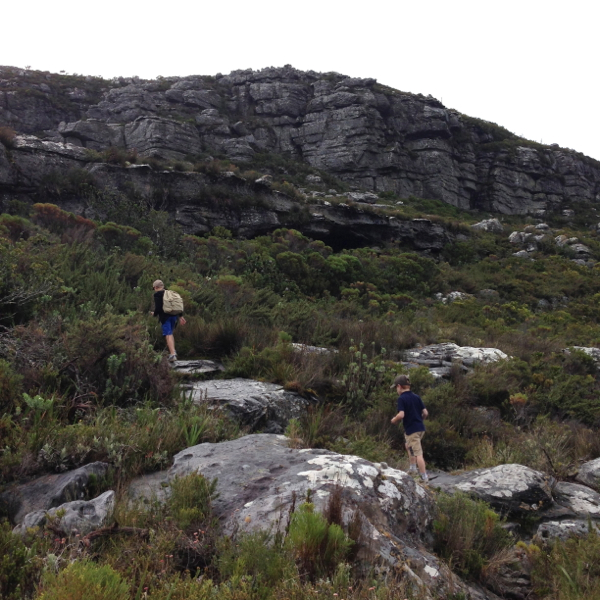 It didn’t matter much to me, though, as the main objective of our hike was to spend time together doing something absolutely awesome.

I incentivized the boys as we walked, telling them that we would stop for our first snack at 550m altitude and then our second one at 875m.  Although I had absolutely no complaining along the way, I had lots of questions about our altitude.  I would be asked “dad, how high are we now?” so I would look at my Garmin and have to report: “still at 787m, another 88 to go before we can stop”.  It worked pretty well as we kept a steady pace and it broke up the walk into sizeable chunks.

After two and a half hours we finally crested the last set of steps and arrived at Maclear’s Beacon at 1087m.  There is a big cairn at the top and it was like reaching the top of Everest for the boys.  We didn’t have any flags to plant but we were very happy with a few pics and the remaining snacks, which, by that time, amounted to about 2 Eet Some More biscuits and a fruit stick. 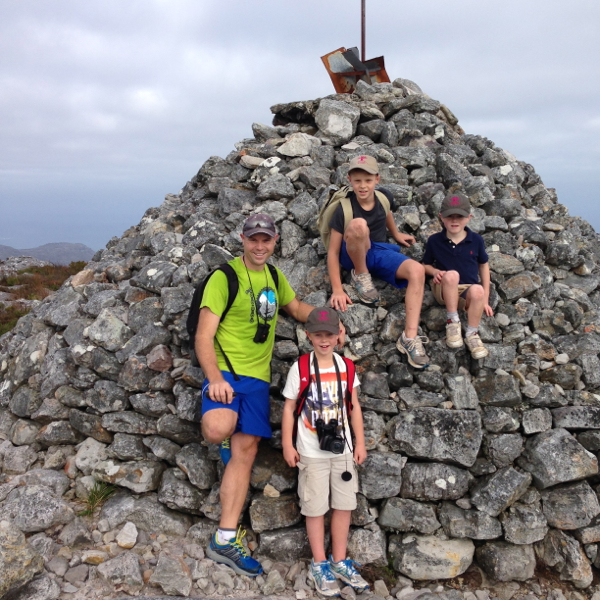 The Buckham boys at Maclear’s Beacon 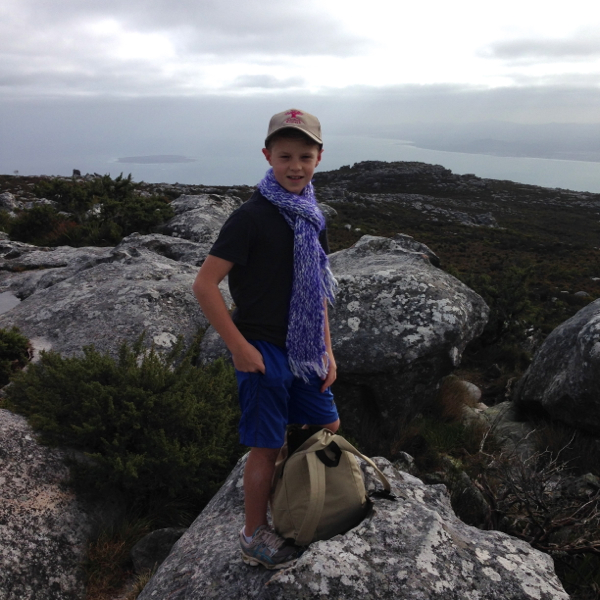 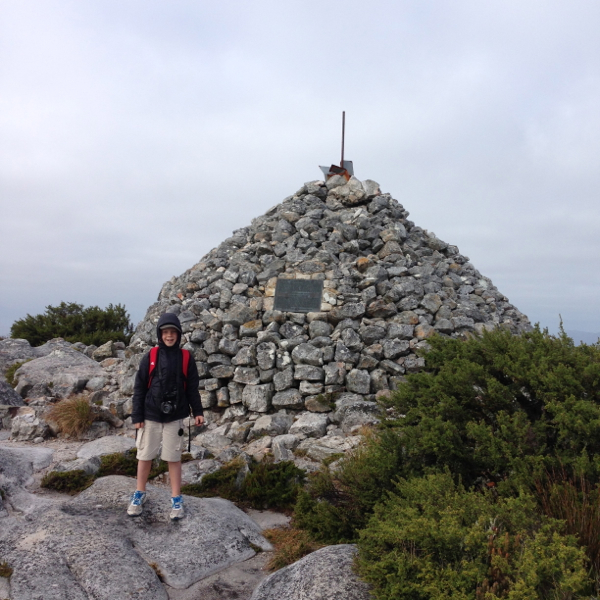 Adam at the cairn

The hard work was over and I had to fulfill my promise of a hot chocolate at the cable car coffee shop.  It was chilly at the top and the boys had earned a sugar-filled reward.

I had one more requirement, though.

I had seen some reports of a Sentinel Rock Thrush that was uncharacteristically habituated near the cable car.  I did not know exactly where this bird was supposed to be, but from a few pics I had seen it was apparent that it should not be too hard to find.  Sentinel Rock Thrush was a bird I had already covered a lot of ground to see but had still come out empty-handed.  I had been up the Groenlandberg mountain on my bike to no avail; I had spent a fair amount of time at Rooi Els; I had already had a visit to the cable car and I had also spent a very strange hour at the Strandfontein Pavillion where there had been one hanging around in the strangest place.  All those attempts had been fruitless so I was quite keen to close the chapter on this bird.

It did not disappoint in the slightest.  It took all of a minute or two of walking around the busiest section of the walkways to find it perched on a rock parading for some of the tourists.  I suspect they had no idea what it was but they were pointing their cameras at it and taking plenty of photos.  It is not the worst looking bird in the world so it wasn’t a surprise that it was attracting the attention that it was.  So, a second challenge bird for the morning and now we could happily head to the coffee shop and warm ourselves up. 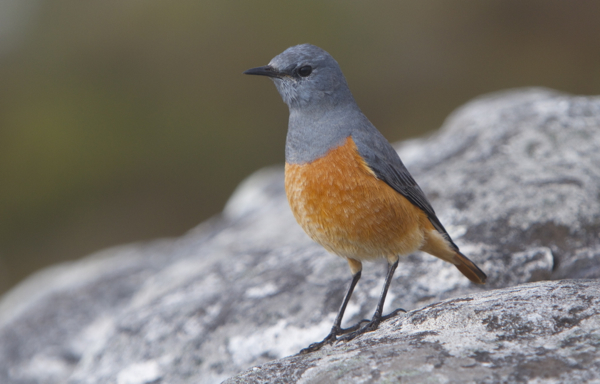 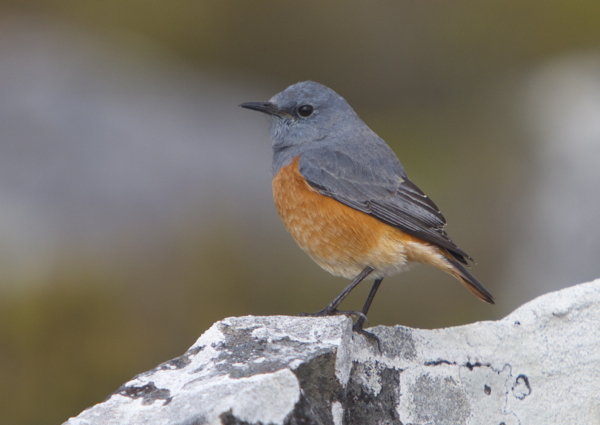 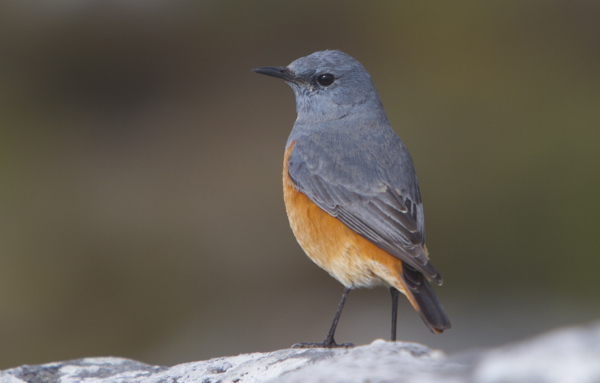 Just as the rock thrush had not disappointed, neither did the hot chocolate.  I ordered a cappuccino but I had huge order-envy when I collected the boys’ hot chocolates.  I had to rate them as the best I had ever tasted.  Fortunately they were too rich for the boys to finish off so I got more than my fair share. 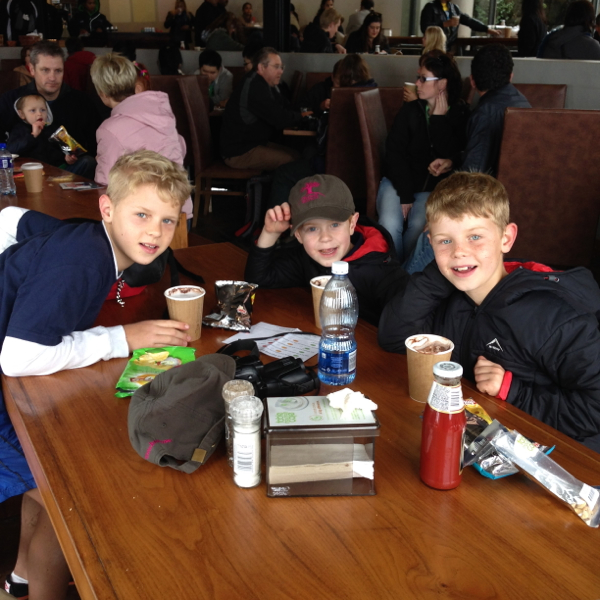 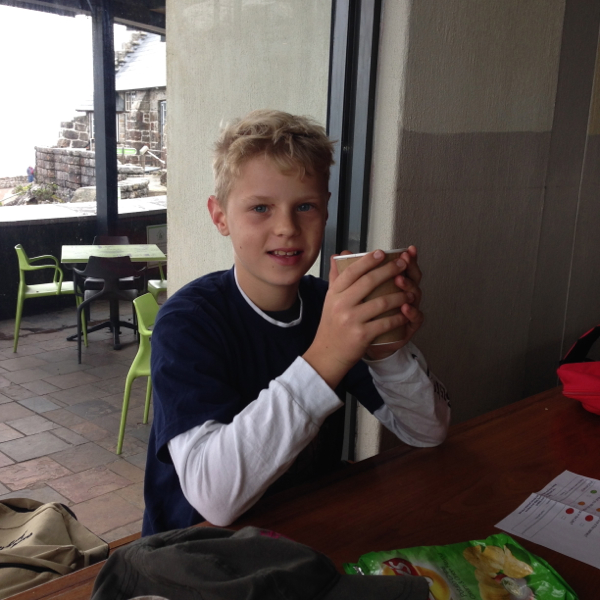 Half way through our hot chocolate sitting Adam shouted out “there’s the sentinel!”

And there it was hopping around amongst the tourists, picking up the scraps under the tables and chairs.  It was a “mossie-like” Sentinel Rock Thrush for sure.  I have suffered some degree of abuse this year from two of my challenge adversaries (Dave and Dom) for trying to assist them with their search for Mallard Duck for the challenge.  I happily ticked my Mallard in Stellenbosch earlier this year but, during a visit to Arderne Gardens (that is a whole other story) when walking past one of the ponds, I noted a pair of Mallards.  Knowing Dave and Dom still needed this bird for their challenge I sent them a text and felt happy about by Good Samaritan deed.  I have since had to suffer for my moment of generosity and thought of others.  Apparently some Mallards are better than others and the ones at Arderne Gardens are seemingly less “tickable” than the ones at Zandvlei.  And, for that, I have taken heaps of abuse.  I do wonder why there is a difference, particularly for an exotic species in the first place.

Anyway, why do I tell this little parable?  Well, I suspect I may be told by these self-same adversaries that my Mossie-like Sentinel Rock Thrush may not count for the challenge either.  I have news for them.  I have ticked it already and I am not going to be changing it.  Just like the Mallard I have on my list.

All that was left was to finish off our hot chocolates and purchase our tickets for the downhill cable car trip and back home to a well earned lunch.  It was a great achievement for my boys and I suspect it will be repeated many times in the future. 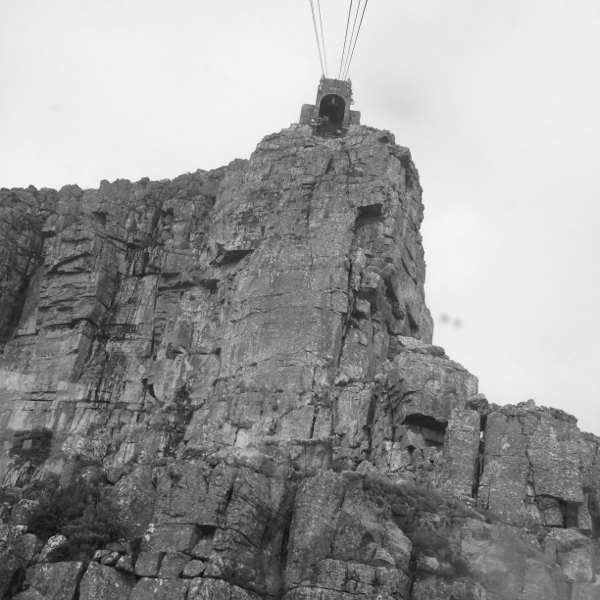