Getting in one more lifer for the year 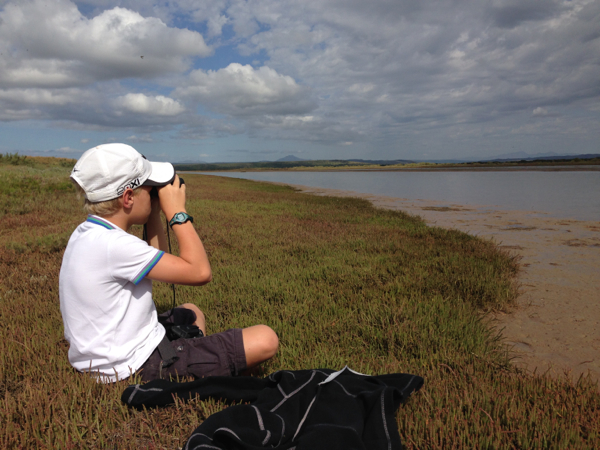 Having never set foot in Mozambique throughout my entire birding life, it is not that much of a surprise that a Crab Plover had never found its way onto my list.  Occasionally, there are records of birds that wander a little further south into Zululand, but there have been no opportunities of a bird close enough for me to justify twitching.  So, it remained tickless.

About 3 weeks ago an adult bird was seen at Kei Mouth in the Eastern Cape.  Although far further south than normal it may as well have been on the moon as Kei Mouth is a mission to get to from Cape Town.  It didn’t even cross my mind to attempt to see, as life at home was chaotic as we counted down towards the end of the year.  School concerts, nativity plays, end of year braais and our interim reporting period at work meant some hectic time management skills and a selfish twitch to Kei Mouth would have meant immediate divorce and loss of custody of my four lovely children.   There are just some things not even I am stupid enough to try get past Jeanie.

The juvenile bird found shortly thereafter at St Lucia was also of no help at all.  It would also remain out of reach for me.

Then, about a week ago, a juicy rare bird alert landed in my inbox from Trevor Hardaker.  It was a delayed report of a Crab Plover at Gamtoos River Mouth.  Gamtoos is a birding spot I know very well.  It is a short drive from St Francis Bay, which is our annual holiday destination.  Not only was a Crab Plover getting closer to me but it was also becoming more twitchable.  If this bird stayed until our arrival in St Francis on 27 December it would be very doable.  I would have a chance of making it to the end of the year without the divorce papers being served.  It was still a long shot but a shot at least.

The day after the delayed report was sent out, Wessel Rossouw, a local birder I knew from atlas vetting, verified that the Crab Plover was still at Gamtoos and seemingly appeared quite settled in amongst the hundreds of other waders on the estuary.

As good as this news was, it was most likely to drive me crazy.  It would be almost impossible for me to wait a further three weeks to add this bird to my list.  What were the chances it would stay that long?

I therefore started hatching a cunning plan that would accelerate my assault on one more lifer for the year.

I would be driving my family to Plett on the 14th of December for phase one of the holiday and, although I would be returning to work for the week, I would at least have the long weekend that much closer to Gamtoos.  So, a quick check on Googlemap for the distance between Plett and Gamtoos, plenty of sucking up to the wife, and regular contact with Wessel to make sure the bird was still there and our day of reckoning would be Sunday, 15th December.

Interestingly, the weekend for the Crab Plover was the same weekend that Tommy, my father and I did my longest range twitch ever for the Golden Pipit, exactly 3 years ago.  Tommy was just 7 years old and it was the kickstart of his birding interest.  Now, three years later, he was several hundred birds further along his list but he was equally excited about joining me on a twitch for a rare bird.  Unfortunately the third member of the triumvirate was away at the time so it would be just the two of us.

We woke up long before the crack of dawn, made absolutely certain that we didn’t wake the entire household and hit the road east.  It was a short-range twitch, relatively speaking, as it was only about 190kms, but the levels of excitement were very high.  Wessel had given me an update the previous evening that it was still there and I was very hopeful.  I have been a birder long enough, though, to never take for granted a rare bird as I have been disappointed on far too many occasions.  This time, however, the birding gods were smiling.  We arrived at Gamtoos just before 7am on a perfect morning and the first person we saw was Wessel who already had his scope out facing the sand bank on the estuary.  We jumped out of the car and got our first look at my first lifer since February this year.  It seemed a little too easy but it had certainly involved a fair bit of effort just getting there and I suppose we were due a good break.

As is customary, there were a few high fives and now we could relax and try get a little closer for a decent photograph. 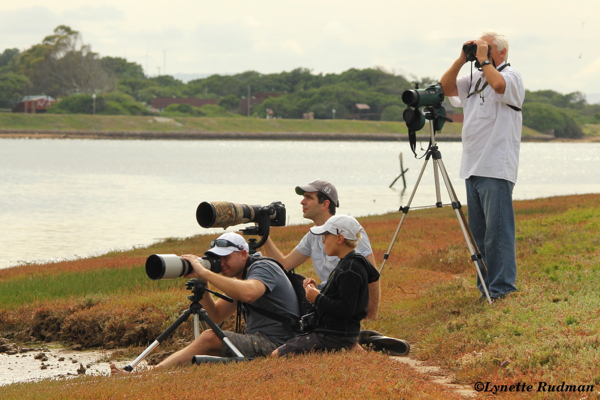 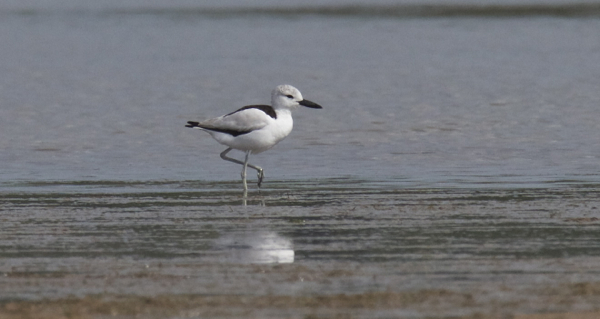 Birding at Gamtoos is very rewarding as there are usually birds in just about every direction you look.  There is a price to pay though, as the walk to the best viewing spot for the waders is a relatively long one, but, on a perfect morning with a great prize at the end, it was certainly no hardship.  The swifts and hirundines were out in great numbers sweeping up the insects that were rising from the salt marsh on a warm morning. We were lucky enough to find a single Sand Martin amongst the melee and, as is pretty standard with Sand Martins in a flock of other hirundines, one usually gets one decent view and then it is virtually impossible to find it again as every Brown-throated Martin disappoints as it turns into the sunlight to reveal a dark throat.

We arrived at the sand bank and settled in to get some photos of the Crab Plover.  It spent about 45 minutes roosting where it was not particularly close, but eventually it obliged with a bit of activity as it patrolled the mud flat for one or two morsels.  There were no other remarkable waders on the mud flat but a single busy Terek Sandpiper was pleasing, as was a single Eurasian Curlew.  An Osprey did a few fly-bys and confirmed that Gamtoos is definitely one of the best spots to find this bird.

After a few hours of soaking up the abundance of life on the bank of the Gamtoos River we wrapped up and headed a little inland to enjoy the fresh water treats at the Mondplaas ponds.  It was a little late in the day to expect too much but we did manage to eke out a response from a Baillon’s Crake at the lowest Mondplaas Pond.  It never showed itself but it confirmed that this is one of the better spots to see this bird in this part of the world.

Soon enough the morning had become late and warm and Tommy was starting to feel a bit jaded after a 4am start.  We had seen what we had come for and both of us had added to our lists, so we decided to call it a day and head back to Plett to join the rest of the family.

It wasn’t anything like the long-range twitch we had done 3 years previously but is was great bonding time spent with Tommy.