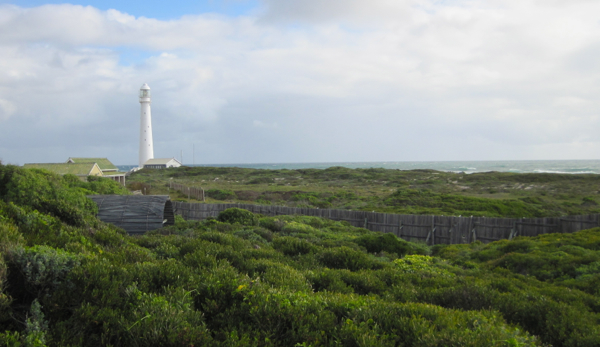 Although Tommy turned ten in August, we had not got round to celebrating his birthday until this last weekend.  He, and his best mate Alley, again decided they wanted a “camping” sleepover for a combined party.  Last year we headed up Table Mountain to the Overseers Cottage but this year we booked the Slangkop Tented Camp in Kommetjie for a boys’ adventure.

The Slangkop Tented Camp is one of the stopovers for the Hoerikwagga Trail, which traverses the spine of mountains from the Waterfront through to Cape Point, but during quiet times they make the camp available for the general public.

It was a perfect spot for the party with 6 tents, sleeping two or three boys each, with Alley’s dad, Alistair (“Rip”), and I making up the numbers.  Adam was thrilled to be one of Tommy’s selected guests for the party so he shared with Rip and I.  It is a true indicator of the close bond that Tommy and Adam have that Tommy chose his brother over an extra friend to invite.

I had looked forward to the sleepover, but it must be said that managing thirteen ten-year old boys can be a daunting task.  Rip and I were wished great deals of luck by the parents in handling the chaos, and I suspect one or two parents wondered whether we would be able to cope.

Our wives had full faith in us.

Jeanie and Kirst decided that they would drive all the way out with us on Saturday afternoon to make sure the tent allocations were handled fairly, the food was unpacked neatly, there were no precipitous drops from the tent edges and that the kids were given the necessary hugs and kisses before darkness fell.  We had been given permission to allow the kids to bypass the shower block completely and that their teeth wouldn’t fall out if they went one night and morning without a good brushing.  We had no arguments on these points from the boys.

We arrived late on Saturday afternoon and soon after arriving the kids were allocated to their tents and before long they all disappeared into each other’s tents with several “possession” related games on the go.  It gave Rip and I a chance to relax with a beer and plan the complicated meal ahead – boerewors rolls. 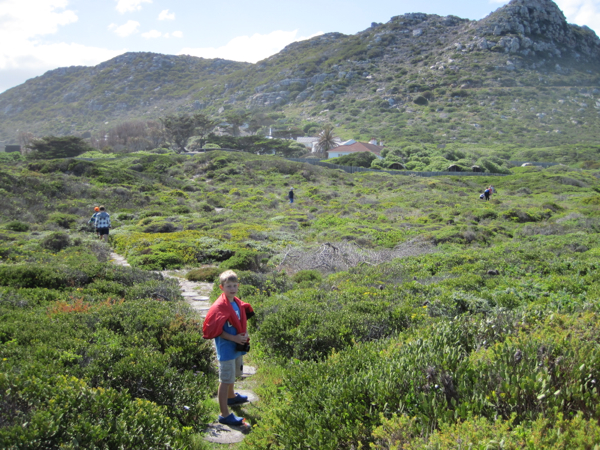 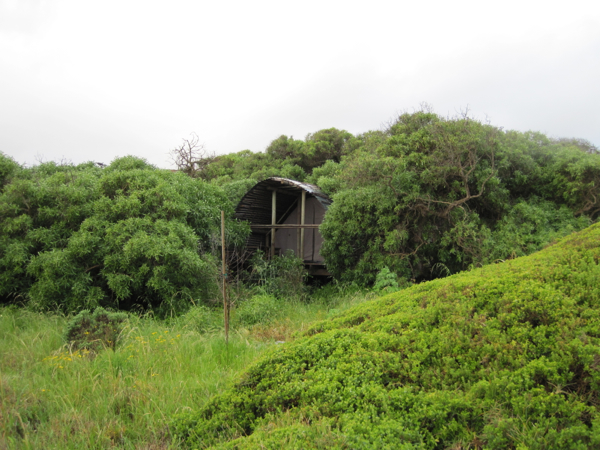 I had also hoped to spend a little time in the area looking for one or two frogs and lizards but my expectations were pretty low.  We were more or less in the main town of Kommetjie and I didn’t think there would be much to see.  Interestingly, I heard a Sand Rain Frog calling in the parking lot when we arrived but thought better than to try and find it.  I had witnessed a Sand Rain Frog search before, and it had involved at least five frogging experts, and, after rummaging through the fynbos of Cape Point Nature Reserve, in the pouring rain, for four or five hours we had still not had any success.  In between managing the activities of the boys I did not think I would have the time to unearth one of the toughest frogs to find.

After the kids had settled in, Rip and I took them down to the beach so they could get rid of some energy.  It was a noble attempt to ensure that they would not be up till midnight, but the weather gods had their own ideas.  From the horizon a big black cloud started drifting closer and closer until it was upon us, and it was a mad sprint back to the tents to avoid a complete soaking. 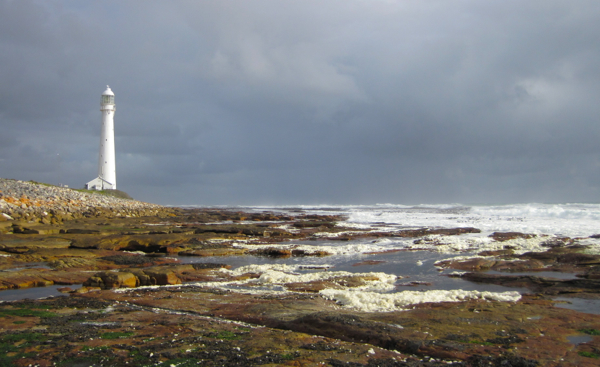 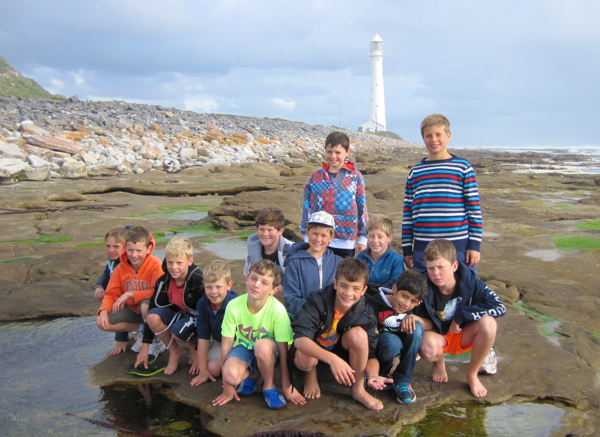 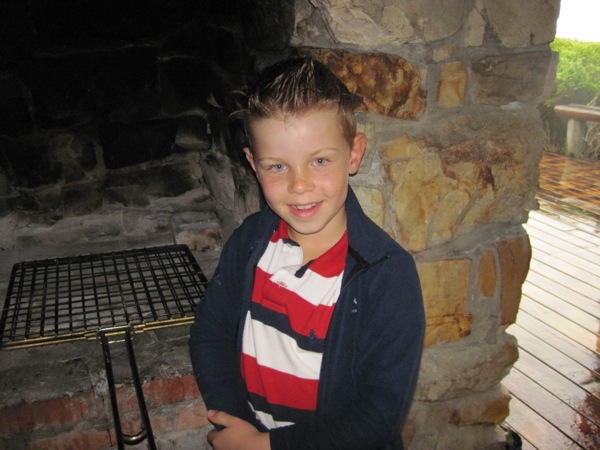 Adam after the downpour 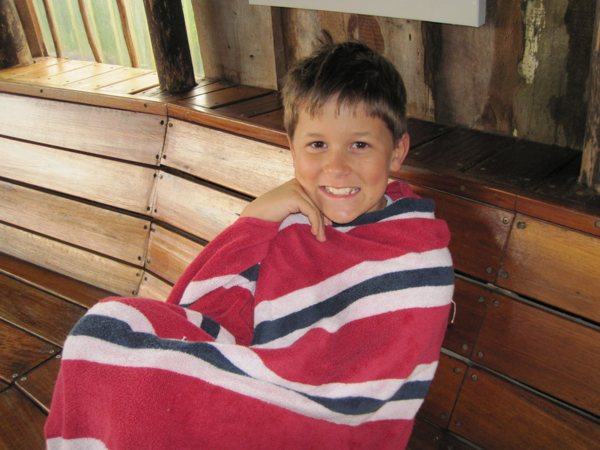 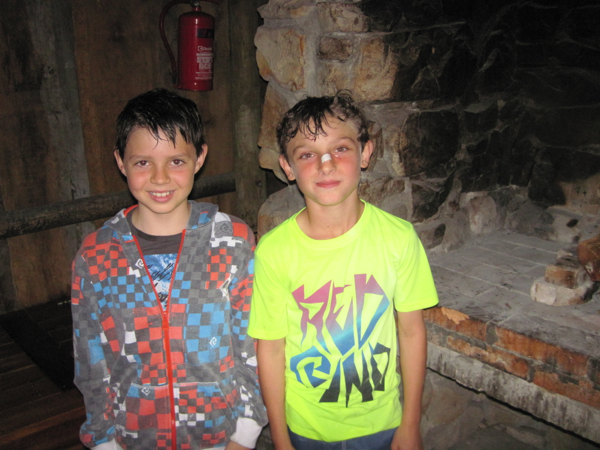 The rain had a pretty positive impact on the frog activity though.  The lone rain frog calling in the parking lot was now joined by plenty of others and before long there was a wonderful chorus rising from the thickets that surrounded the tents.  The kids were entertaining themselves and Rip was building our fire before it got dark so I decided to patrol the property and see what I could find.  It wasn’t long before I lifted a rock and found a Herald Snake curled up against the cold.  It wasn’t a rain frog, but it would certainly be something for the boys to see.  I slowly lowered the rock and headed inside to gather the masses.  After reminding them that Herald Snakes could give a bit of a bite I slowly lifted the rock and attempted to show it to them.  It was a bit of a damp squib, however, as the mayhem of thirteen over-excited ten-year olds chased the snake into the depths of the earth before I could give them all a view.

They were now all outside and they had seen what wonderful opportunities were available and so they all scattered in different directions to see what they could find.  I followed closely making sure that they didn’t endanger any poor animals, but, most of all, I wanted to make sure they didn’t endanger themselves.

It wasn’t long before Tommy’s mate, Jack, called over to say that he had found this weird “crab”.  I wondered what he was referring to as, although a crab was a distinct possibility, I just felt that his identification may have needed some assistance.  I walked over and looked into his hand and it was a very strange crab indeed.  It was a beautiful, tiny, male Sand Rain Frog.  What an amazing find. 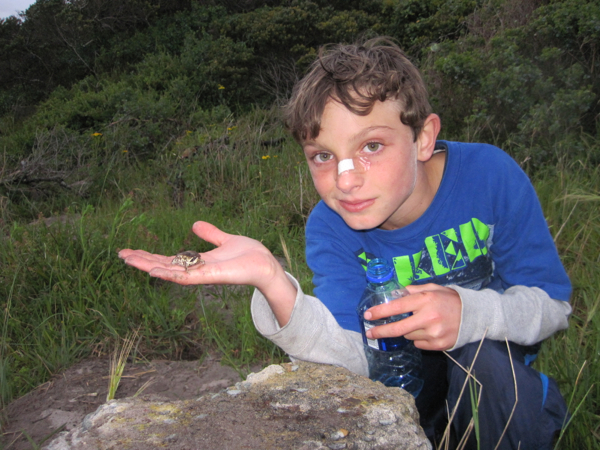 Jack with “his” Rain Frog

This poor little creature was soon surrounded by all of us trying to get a view or a “feel” of this wonderful little thing.  I may have described a rain frog before but it merits a reminder – it is a like a marshmallow that has been braaied for just the right amount of time – just a little crusty on the outside but quite squishy on the inside.  It has those small dark eyes (for a frog) positioned on the front of its face and the typical Breviceps grumpy down-turned mouth.  For the boys it was a great opportunity to touch and feel something that they had never seen before. 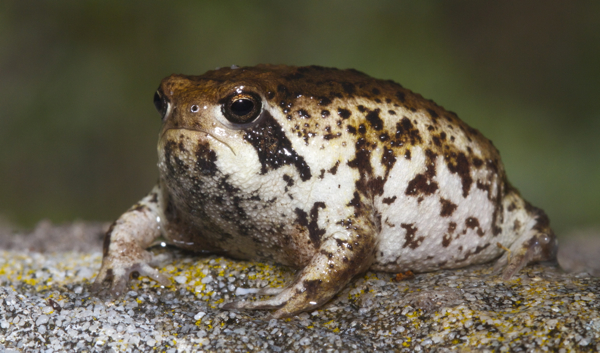 Remarkably, the frog that Jack found was just one of four that we found in an area of molehills less than ten square metres in extent.  In fact, we found two males in a territorial battle sitting on top of a molehill.  This was bizarre behavior for such secretive animals but the conditions were obviously just right for them to be out and calling.

I managed to take a few pictures of one of them before we put it back carefully on top of the molehill and watched it burrow backwards into the sand.

By now the darkness was setting in and energy levels amongst the boys was possibly even higher than before.  The rather officious Parks Board lady had also told us on arrival that we had to keep noise pollution to a minimum.  Apparently the Parks Board had an arrangement with the neighbours that here was to be absolutely no noise emanating from the dining boma as the camp was intentioned for tired hikers and not rowdy pre-teens.  More frustratingly, we had not been told about the noise issue when we booked.  I decided to tell her that these were the most angelic ten year olds you could ever find and there would be absolutely no noise whatsoever.

Clearly, a significant stretch of the truth.

The evening went by with more than a normal amount of noise.  While Rip and I were putting together a braai the boys were running wild in the boma area and backwards and forwards from the tents.  They had discovered the tea and coffee sachets in each room but, worse than that, they had discovered the attending sugar sachets, and these became items of great worth as they were swallowed by the boys and became items of great scarcity.  Eventually every sugar sachet in the entire campsite had been consumed and that certainly did not help our task of keeping the boys quiet.

Some degree of calm returned after dinner as we entertained them with charades, broken telephone and Rip’s introduced game of the “Chocolate Eating Game”, which involved rolling a dice and eating a slab of chocolate with a knife and fork.  It was meant to moderate the speed at which the slab of chocolate was eaten but, within five minutes, a bumper sized Top Deck had been devoured.  It, too, did not reduce the energy levels to the required degree for lights out. 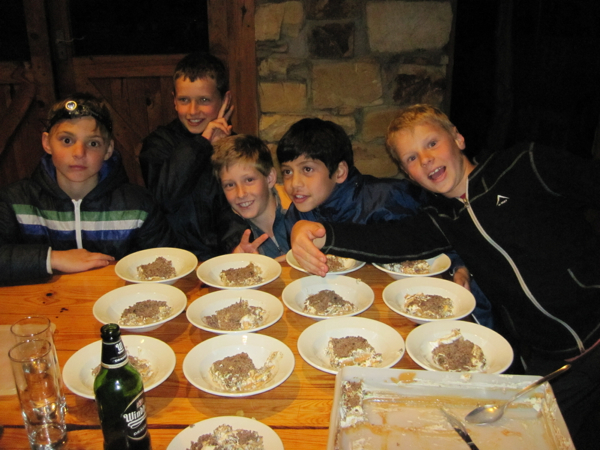 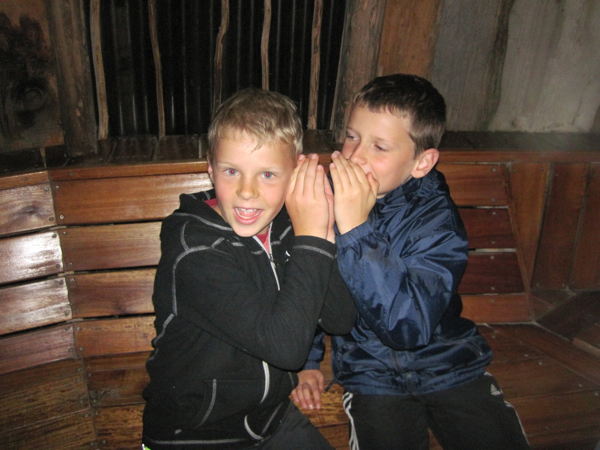 Despite that we managed to usher them all into their tents by 9:45 and we upheld our promises of not forcing them to have a shower or brush their teeth.  The moms were nowhere near and part of the fun of a campout with us was to defy their mothers as much as possible.

Within about twenty minutes they were all fast asleep and there was no need to call any moms to tuck them into bed.

We woke up to a Sunday morning with far better weather than the night before.  The clouds had whipped across the Peninsula overnight and, despite an angry sea, the wind had dropped and we would get a chance to get out and about before we were kicked out by our rather highly strung host at check-out time.  Breakfast was hastily arranged and once the boys had packed their clothes we took a walk along the beachfront towards Die Kom.

Adam and I had found a rather smelly Common Slugeater early on, which was the source of some amusement for the kids and, considering this snake has no teeth, it was a good one to show to the boys without fear of any mortal wounds to take home with them. 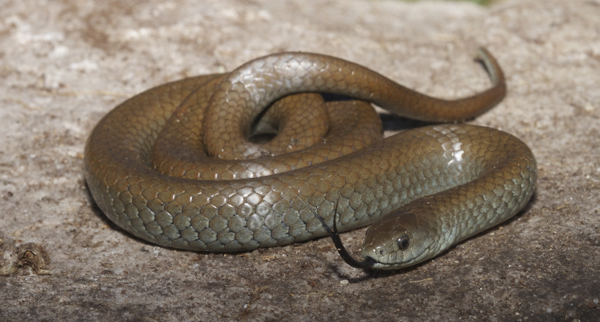 The boardwalk and pathway towards Die Kom is bordered on both sides by plenty of rocks and, whilst Rip was speeding them up on their walk, I was slowing them down at the back as they helped me look for something interesting to see.  Even though we avoided a snake bite, A Black Girdled Lizard gave Tommy quite a nasty nip as he reached for it under a rock.  It was a good lesson for the boys to be very careful with what they may find.

In a very short space of time we had a good list of reptiles with a Marbled Leaf-toed Gecko and a Knox’s Desert Lizard adding to the Girdled Lizard but most exciting was the Cape Legless Skink that Jack found.  Despite being quite a common reptile I had just never seen one before and it cemented Jack’s status as the best herper for the weekend. 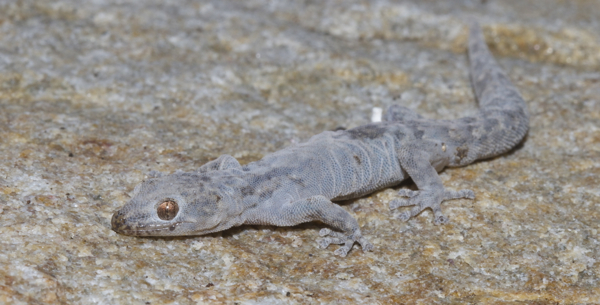 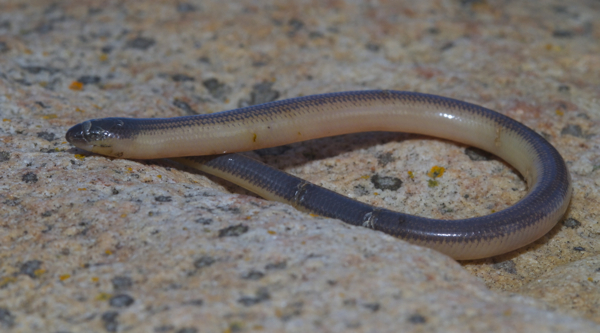 We eventually got to the Kom where a soccer game replaced the herping and we finally got to see the boys expending some seriously pent-up energy.  If only we had found this open patch of grass hours before it may have given Rip and I a chance to take a breath while they entertained themselves. 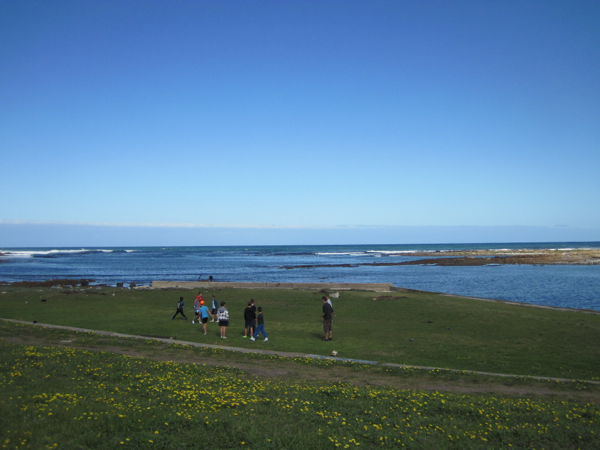 A game of soccer at Die Kom

Still, it was a really enjoyable night away with a bunch of positive, energetic young men.  I look forward to the next campout next year.  Perhaps it will be the moms’ turn to run the show? 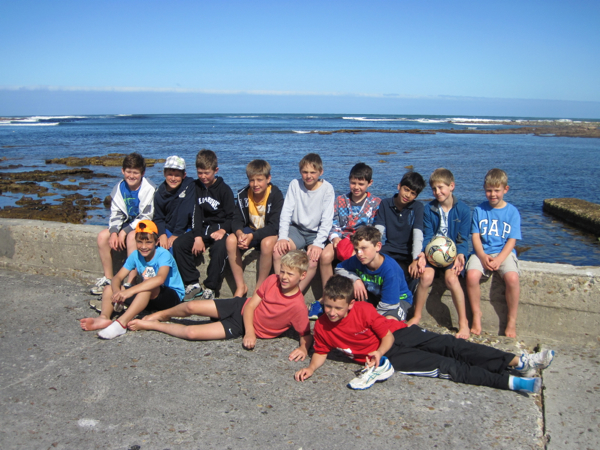 Farewell to the party

One Response to Slangkop Tented Camp – a birthday campout