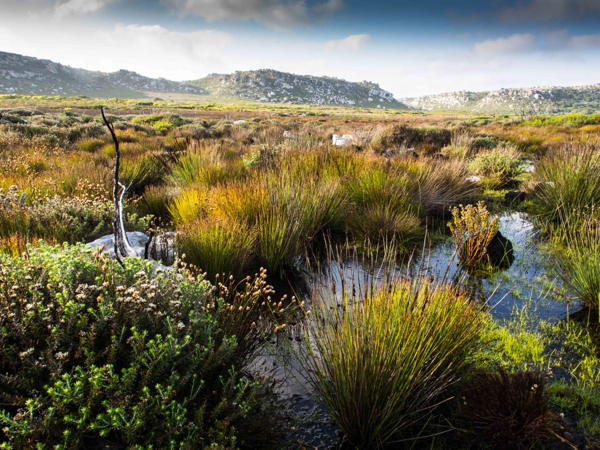 The most recent week was certainly one of the more stressful we have had in a while.  On Wednesday afternoon I got a call from Jeanie to tell me that Tommy had taken a really nasty knock to the head during his rugby practise.  All seemed fine but he had gone into a form of shock with a bout of hyperventilating and the doctor had pronounced that he had suffered a concussion.  It was nothing to be too alarmed about but we needed to watch him carefully for the next 24 hours to make sure he was okay.  On Thursday morning he seemed a lot better but we erred on the side of caution and decided to keep him home from school.

At about 2:45 on Thursday afternoon Jeanie called me in a panic to tell me that Tommy was having an “attack” of some sort.  She was stuck in town and I was stuck in Westlake but I was told that he was being rushed to the hospital by my mother-in-law, Annetjie.  What followed was possibly the worst 15 minutes of my life during which time I couldn’t get hold of anyone to tell me that Tommy was okay.  Whilst I raced along the M3 with lights flashing and horn honking I had the most awful thoughts rushing through my head as to what I would find when arriving at the emergency room.  One hears too many sad stories to be able to say with any certainty that all would be okay but I tried hard to say to myself that this would be another one of those events to chalk down to “good parenting experiences”.

I arrived at the hospital and as I ran into the ward Tommy was lying across some of the chairs.  I rushed up to him and looked into his glassy eyes and straight away he recognised me and seemed to be relieved to see me.  He was shaking uncontrollably and was sweating despite the shivering.  His head was throbbing and he was very nauseous.  Not ideal, but a lot better than some of the thoughts that had spun around in my head for the previous 15 minutes.

The good news was that he was into the radiography department within about half an hour and then the really good news was that half an hour later that we got a completely clean bill of health for his brain and skull – no fractures and no swelling.  The seizure he had had was a real concern but we were told that it was not unusual for kids with concussion to suffer a “shock” episode in the day or two that follows the knock.

Within an hour or two the colour had rushed back into Tommy’s face and he was back to his usual self and we were sent home with a warning to avoid any rugby or other contact sports for the next 3 to 6 weeks.

I sit here on Sunday evening thinking about how we seemed to have returned to normal after a standard Buckham weekend but we were put through some scary moments during the week and it always makes me realise how lucky we are to have 4 healthy kids.  One realises that it is impossible to protect them from everything that comes their way but one always feels so responsible when something happens that you think you could have prevented.

Anyway, rugby was out for the weekend but Tommy still put in an appearance at supporting his team on Saturday morning so we reserved our morning out for Sunday morning.

I roped in my good mates, Dave and Saul, and we had Tommy and Adam and Tommy’s good friend Alley joining me on an outing to Cape Point Nature Reserve.

We had one or two specific things we wanted to see but we really just wanted to get out to see what we could find.  It was an absolutely perfect morning as we headed south along the coastal road.  The early morning sunrise was nothing short of spectacular and the large flocks of Cape Cormorants flying over the golden swells was a pretty awesome sight. 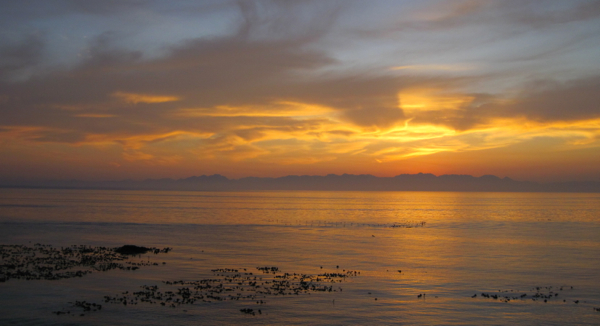 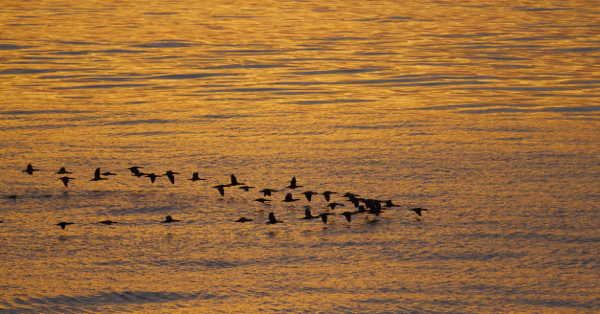 We even had a view of the Zest steaming out past Miller’s Point and it briefly made me wish we were on our way out on a pelagic trip on such a calm morning.  I quickly recalled how green around the gills I was the last time I went out to sea and I was suddenly relieved to be heading out for some land-based activities.

We entered the park and spent some time down at Olifantsbos amongst the flooded restios and rock littered sand dunes.

There are some mornings when it seems as if you will never find anything but this wasn’t one of them.  I managed to find something under each of the first three rocks that I lifted.  The first rock had yet another Herald Snake under it.  I say “yet another” as it seems to be the only snake that I am able to find.  We found about 4 of them at the West Coast National Park three weeks previously and now here was another one. 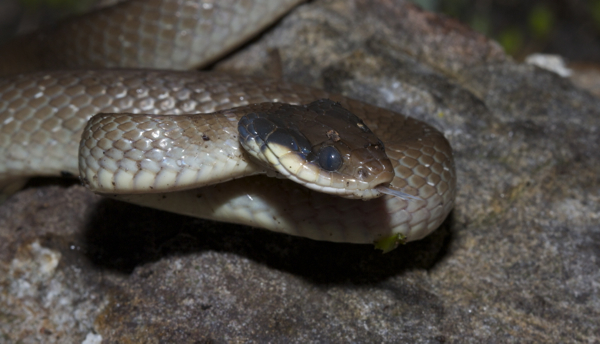 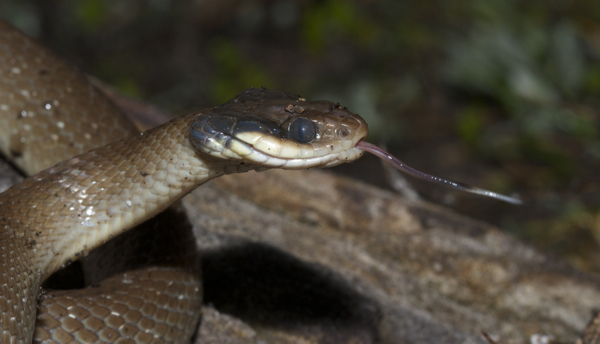 The second rock had a youngish Cape Sand Toad under it.  It was particularly unobliging and whilst most reptiles are pretty inactive at this time of year, frogs seem to enjoy the cold and this toad was insistent that it would not sit still for a photograph.  That meant I managed photos of it intermittently dashing past clumps of vegetation as it clambered away from us. 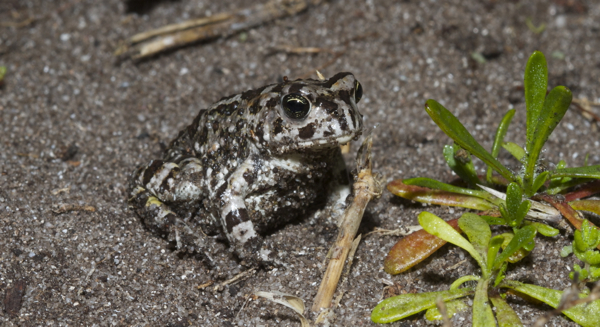 The third rock had a Black Girdled Lizard.  They are extremely common Cordylus lizards in this part of the world but it is always worth remembering that it is an endemic to the Cape Peninsula. 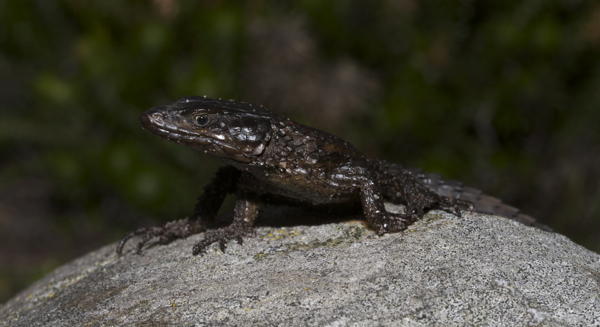 Even Saul got into the action by lifting a rock or two and he managed to find a frozen cold Knox’s Desert Lizard.  Even holding it in our hands hardly got it moving so it made for a pretty easy photographic subject. 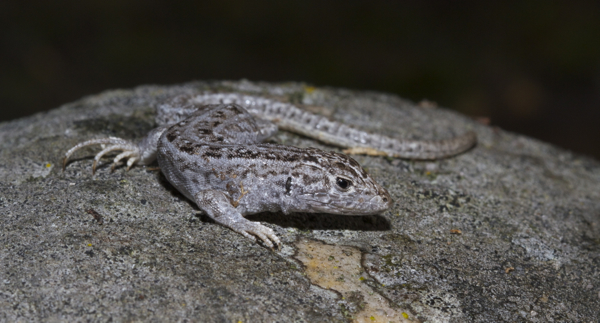 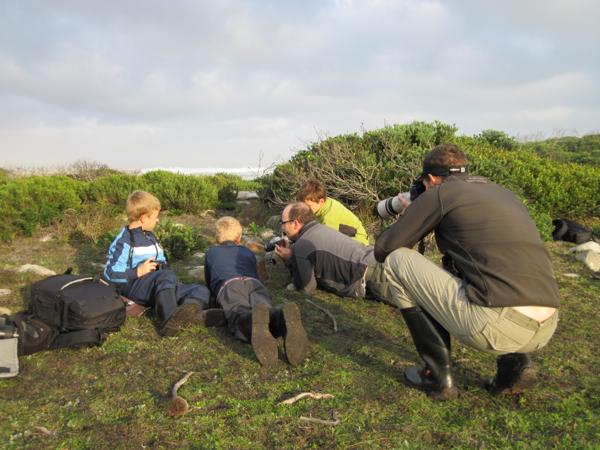 A Marbled Leaf-toed Gecko made it 5 pretty easy animals in a frantic 45 minutes and we were thrilled with our hit rate. 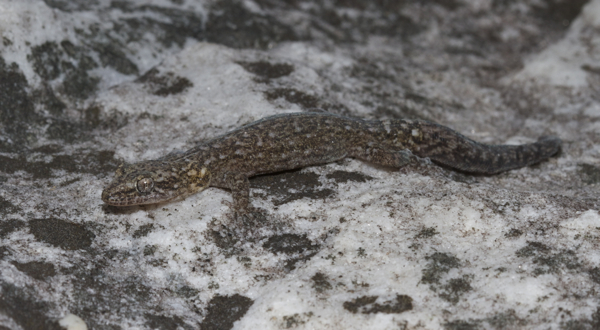 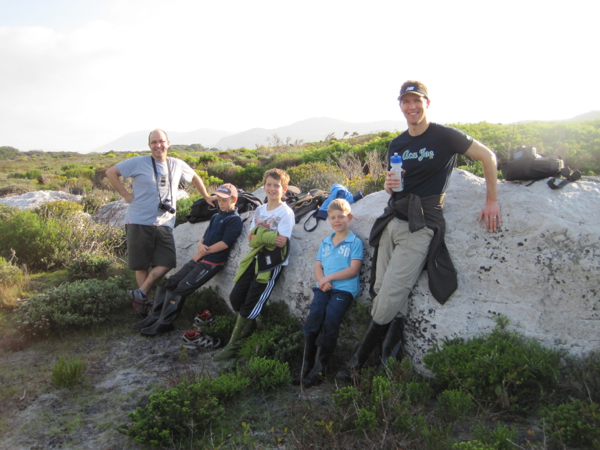 A good start to the day

The one frog we really wanted to find was a Banded Stream Frog.  I had seen one on a previous occasion but I was hoping to see another one.  We heard them all over the place in the damp restios but 2 hours of walking through the scratchy vegetation did not yield a single one. 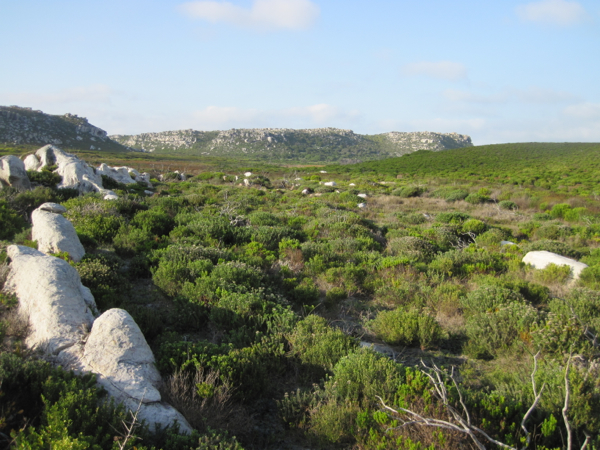 Over the course of our search we had scattered across the plain and at times Dave and Saul were about 200m to the west whilst Tommy and Ally had headed back to the car to look under a few rocks in the close vicinity of the road.  Adam had been loyal to his dad and continued helping me to try find the stream frog.

From right across the plain I heard Tommy shouting that he and Alley had found a snake.

I was about 300m away facing a scratchy run through the fynbos before getting anywhere close to them to see what it was.  I acknowledge I was hoping that the snake would still be there by the time I got there but I was also hoping that they had listened to my regular and insistent instructions not to touch any snakes unless I was with them.

It was a rather frantic dash before I got to them and saw Alley and Tommy dancing around a clearing trying to “herd” their snake.  I was delighted that they had listened to my instructions and had resisted picking it up.  I was also delighted by the snake that I saw on the ground.  I immediately recognised it as a Delalande’s Beaked Blind Snake.

I know that it will surprise a few people that know how little I know about reptiles that I had the confidence to make such an accurate snap ID, but I had done some prep the night before for some of the animals we might see and this blind snake was one of them.

This was a good situation.  During my prep I had learnt that this snake was totally harmless and we were able to enjoy it without fear of any danger to me or my companions.  The only problem was that it was virtually impossible to photograph.  If we had thought photographing the dwarf burrowing skinks was tough this was a different kettle of fish.  Being blind and being a burrowing snake it writhed constantly searching for a soft surface to burrow into which meant it never kept its head or body still for a second.  I suppose I should be satisfied with what I managed to get at the end of the day as the real highlight was actually finding such an amazing animal. 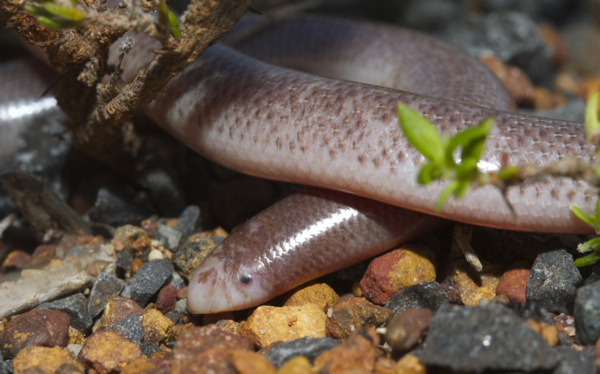 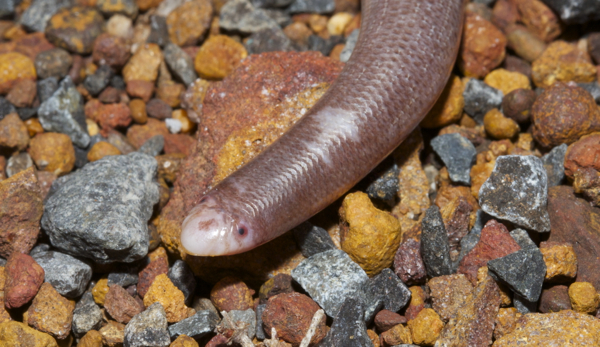 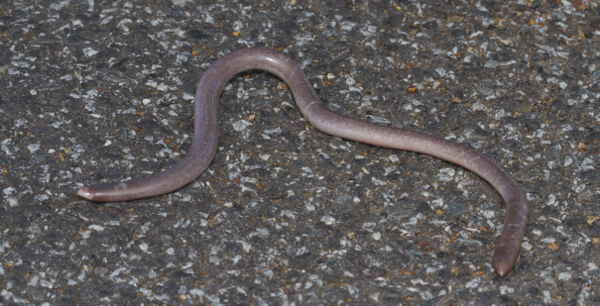 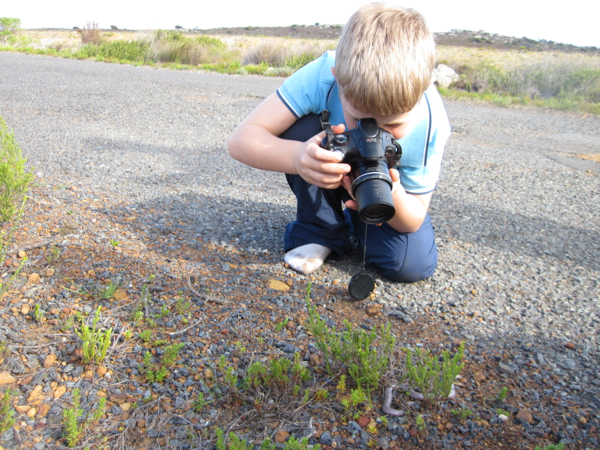 Alley was definitely the hero for the day and although his mother was a little freaked out by the fact that he was our snake-finder extraordinaire I am sure she will rest a little easier knowing that the boys had heeded my warnings as well as they did.

The blind snake wrapped up an excellent morning in the park with five pretty amazing reptile species and one frog species.  Once again I was amazed at what one finds when you just look a little closer.

I was also reminded how fortunate we are to have the family that we do and that it is important to enjoy every moment to the full.

3 Responses to De-stressing at Cape Point