Jack on top of the world

After a weekend of rainy misery we had a slightly better shake at things this last weekend.  Admittedly Saturday was a real mixed bag with moments of sunshine, but mostly moments of more torrential rain.  I was pretty lucky that I got out for a ride on the mountain and with the exception of a few drops early on I managed to avoid the worst of the weather.

Unfortunately the same cannot be said for our school rugby-watching experience.  Tommy was back on the field as wing for the U10Bs and i just knew that he would see precious little of the ball in the mud and pouring rain.  He only touched it once but it was to round off a try-scoring move which I suppose is the best way to handle a dearth of involvement. 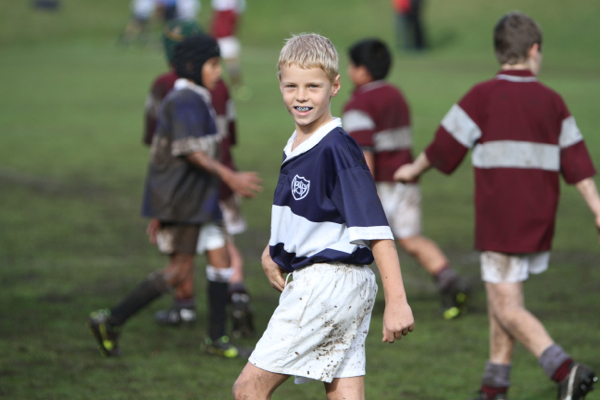 I had to duck in and out of the rain myself to ensure the camera stayed dry.  Emma also decided that she wanted to get stuck into the mud.  I suspect she ended up dirtier than Tommy did. 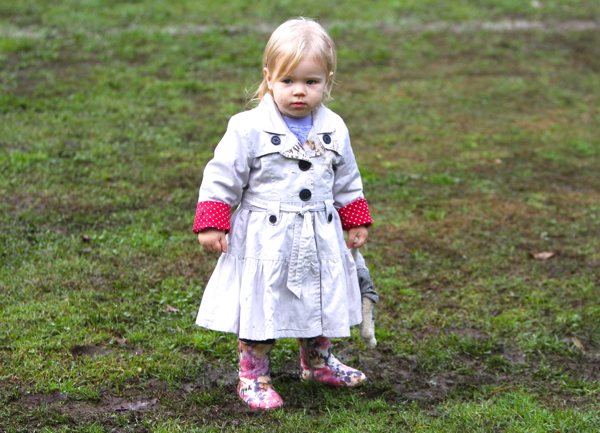 We had no space to breathe and then it was across to Adam’s first rugby game at school.  Adam has been laid pretty low for the last two months with Glandular Fever and, at times during the past two months, we have wondered if he would ever be well enough to play school sport again.  For a kid who loves his rugby and cricket it had been soul destroying seeing how ambivalent he had been towards sport in general.  He had definitely been on the mend over the last few weeks and when the Grade 2s were asked to play in the curtain raiser for the First Team there was no stopping him.

It is traditional for the Grade 2s to sing the national anthem before the curtain raiser and it was great seeing these little Grade 2s singing Nkosi Sikeleli as though they were about to play the All Blacks in the World Cup Final. 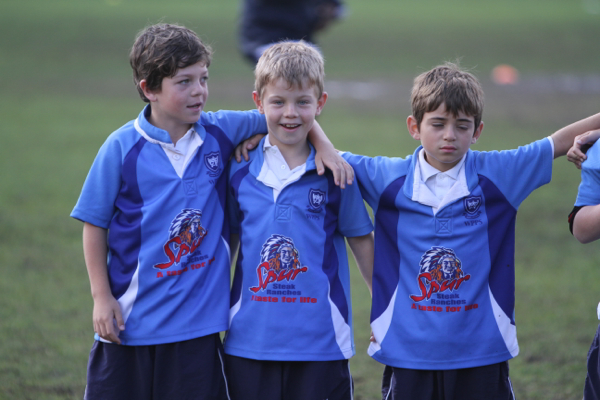 Ready for the anthem 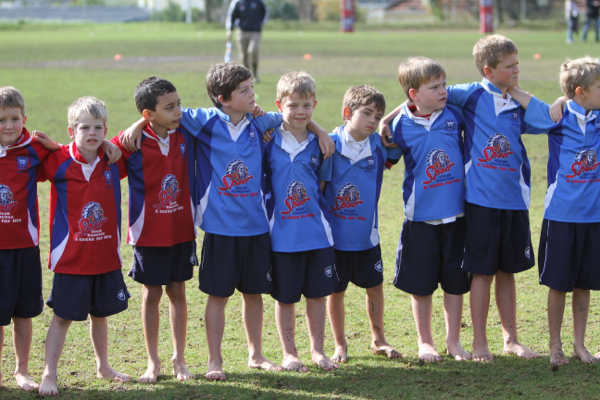 Once the ceremonious activities were dealt with the kids took the field and entertained their eager parents as they ran in several different directions (not always the right ones) slipping and sliding in the mud that had come to surface during the morning’s downpour.  Adam got stuck in as though he had been playing the whole season and although there were no tries for this little Buckham boy he made his parents very proud with his determined endeavours on the field. 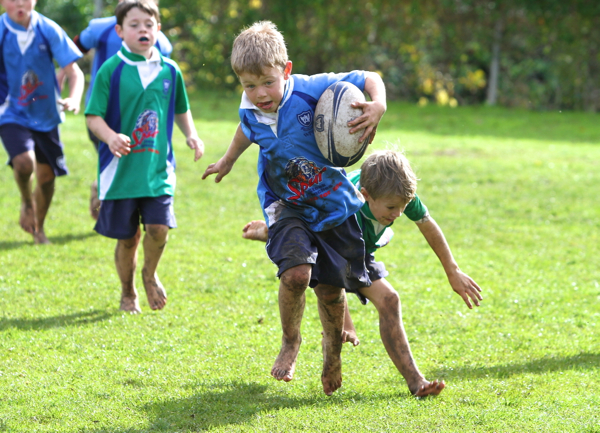 Adam on the run

Despite some impressive performances from the two oldest Buckham boys the weekend certainly belonged to their younger brother, Jacky Jack.

Sunday morning was the annual Dads and Lads Table Mountain Hike.  A group of 60 or 70 dads and lads met at the Cecilia Forest parking lot for a walk up Cecilia Ravine to the De Villiers Reservoir at the top of the concrete road.  The distance was not significant but the altitude gain of over 650m was.  I had done several walks with Tommy and Adam over the years and they were quite capable of getting to the top but Jack had never walked much further than around the block and his propensity for a long hike up the mountain was pretty unknown.  I had my doubts that he would make it much more than half way up before he started asking when we were going home.  I had wondered what I would do when he wanted to go back to the car after 15 minutes of walking whilst his older brothers would be just warming up. 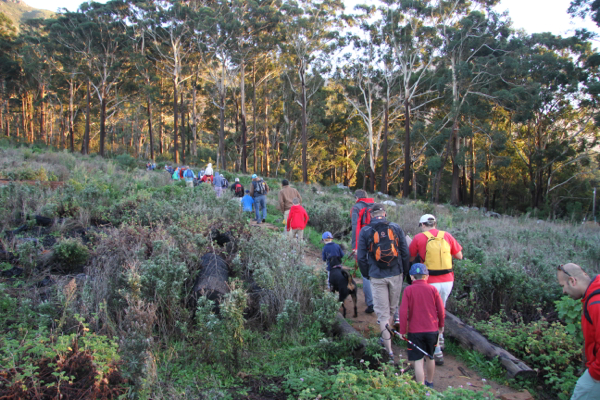 One thing we didn’t need to worry about was the weather.  The clouds from the day before had swept across the Peninsula overnight and had been replaced by a bright blue sunshine morning which, although a little crisp early on, had the signs of being an absolutely perfect winter’s day.  The left over autumn leaves on the poplars on the lower slopes created a pretty picture and the waterfalls were in full flow after the drenching rain the day before and the previous weekend. 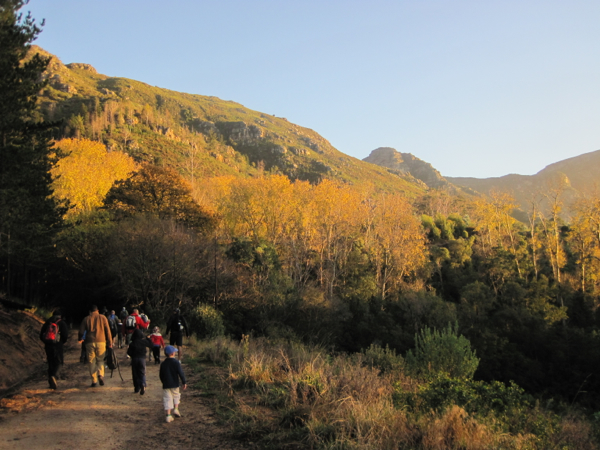 I let Tommy and Adam go a little ahead whilst I applied very little pressure on Jack.  We stuck to the back of the group and we took our time over the first section.  I thought it was a slightly worrying sign that he kept telling me that this was the highest he had ever walked as that was only about 5 minutes after leaving the car.  We had only climbed about 30m and had more than 600 to go.  A few distractions in the first half helped a lot.  There was a treasure hunt and a few photo opportunities as well as a pair of Peregrine Falcons stooping after an unusual quarry for the mountain in a Rock Dove.  We reached the waterfall which marked the half way point and it was decision time.  Would we be turning back or would we be going further? 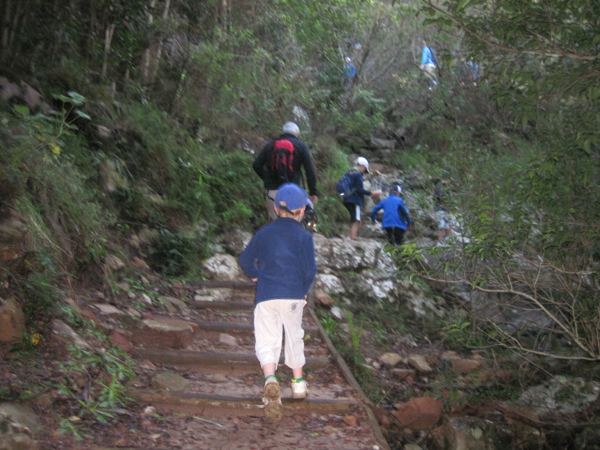 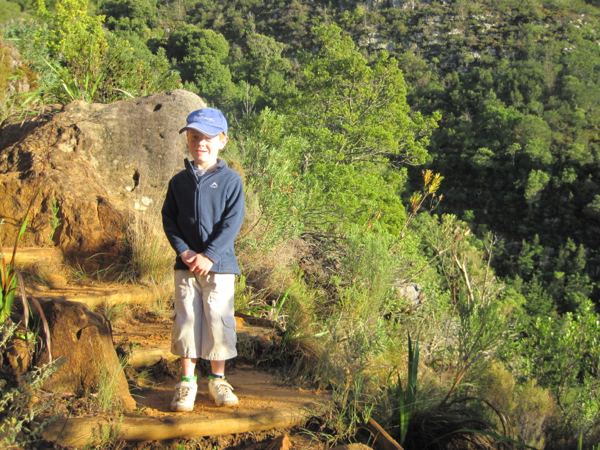 I nervously asked Jack how he felt and whether he wanted to go further.  Without hesitation he told me: “I want to go to the top!”.

It was music to my ears and so we set off on the next segment which was the ascent of the Cecilia Buttress.  This was more of a scramble than the initial section but walking behind Jack I was able to push him from behind up all the large boulders that his short little legs couldn’t climb.  I was always expecting him to say that he was tired or asking when we were getting to the top or why can’t we go home but those questions and complaints never came.  He kept on trudging up the hill until we were eventually at the concrete road and the pinnacle of our climb.  All that was left was a high five and a picnic next to the De Villiers Reservoir. 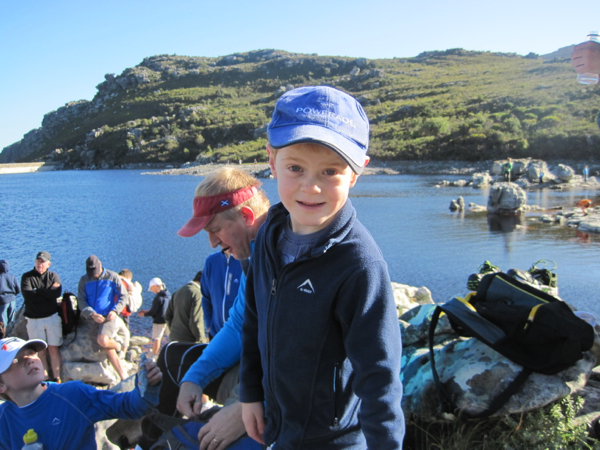 Jack seemed a little nonplussed at all the attention and wondered why I was so impressed that he had got there.  I suppose he thought that if his brothers could do it, then why couldn’t he?

I sent many of the boys looking for a frog or two but the best they could come up with was a few young Cape River Frogs and a Clicking Stream Frog or two.

We would have to reserve a bit of frogging for the way down.

I had had success with a Cape Peninsula Moss Frog on the moss covered cliff face alongside the concrete road almost exactly a year ago so I figured we would give it another go.  Last year we had spent about half an hour searching amongst the moss for these really tiny little frogs and when we found one we had considered ourselves unbelievably lucky.  This time around the frogs were calling all over the cliff face and there were a number of relatively open areas where they were calling.  It made it so much easier than normal and after about 30 seconds I found one sitting on a tiny little ledge underneath a bit of moss.  We spent a few minutes getting a few photos and it confirmed my opinion that these minuscule frogs are incredibly difficult to photograph.  They are less than 20mm long and no matter what angle you choose the photos just never look right. 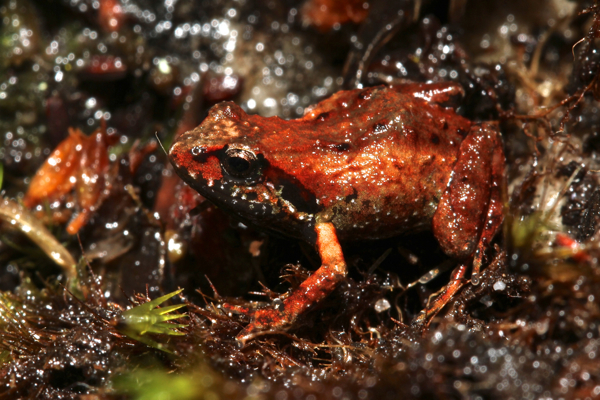 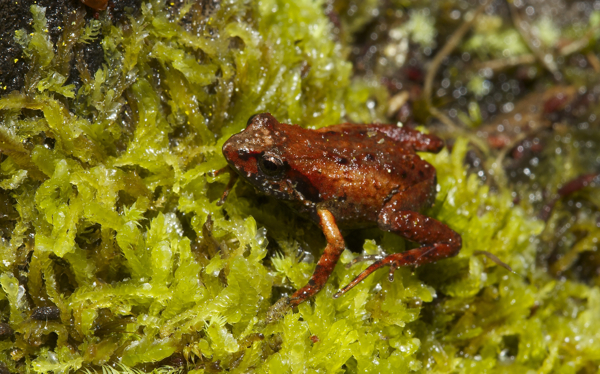 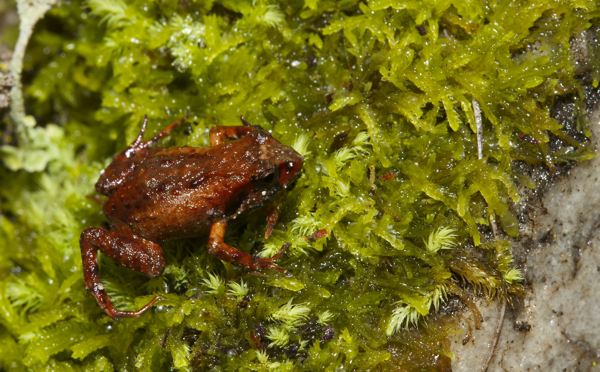 Anyway, it was lucky to find one and after a good few angles tried it was finally time for Jack to ask when we were going home.  I could hardly blame him after all the patience he had shown in getting up to the top of the mountain.

4 Responses to Jack on top of the world