If you ask any SA birder what their most wanted bird is, I can assure you that almost every one would put a Pel’s Fishing Owl at the top of their list.  It is a bird of the tropical north and north east of our sub region and due to its nocturnal and relatively secretive habits it is not encountered particularly often.  Many an expedition to the Okavango Swamps has been undertaken specifically for Pel’s and unfortunately many of those expeditions have come up empty handed.  It is not the rarest of birds and there are a few hot spots for them but in my 33 odd years of birding I have only encountered this magical bird on one previous occasion.

It was my one and only trip to the Okavango some 20 years ago and the sighting involved much anguish for my family as my dad and I dragged by mother and brother half way across the swamps to a remote little island in the heat of the day to try and find one.  We succeeded on that occasion and it was well worth the trip but subsequent visits to suitable habitat over my many years of birding have not revealed a second sighting.

The closest I got was during our visit to Pafuri Camp earlier this year when we were radioed whilst out on an evening game drive that there was one perched on a large tree across the river from the camp.  Naturally we headed straight to the camp to try catch a glimpse before it disappeared but our attempt was thwarted by a Three-banded Courser which was a lifer for me at the time and hence stole those few minutes that made the difference between success and failure.  Disappointingly I was with Tommy and Adam on that occasion and the Owl would remain as a big miss for them.

Fast forward to a few months back when the rare bird alert had a little snippet about a suspected sighting of a Pel’s in Newlands.  This certainly seemed to be some kind of hoax.  The nearest known population was at least 1500kms away in Northern KZN.  Surely it was not possible that there was a Pel’s flying around in my own neighbourhood?

The observers were confident of their ID and to add credence to their claim they had a feather or two as evidence.  Although most of us suspected that they had been consuming too much of the Cape’s finest, it did seem that there was just the slightest possibility that there was something to this story.

Nothing else came of that until a few weeks ago when we were all gobsmacked when Trevor Hardaker posted a pic of a Pel’s Fishing Owl on his rare bird report, taken by him in a garden in Newlands on a Sunday night no more than 1km away from where I live.  In fact, the tree in which the bird was perched was about 5 or 6 metres away from a very good friend’s house.  This sighting was going to create a high degree of mayhem amongst the keenest birders in Cape Town.

The offer went out to secure a spot for an evening vigil for a possible further sighting on the deck of the couple on whose property the bird was found.  I didn’t hesitate to get my name on the list and managed to get onto the very valuable “Monday night list”.  The Pel’s was now no longer a myth – it was the real deal and it had been methodically working its way through the goldfish collection in the fish ponds in the immediate vicinity.  In fact, it was the discovery of fish carcasses with missing heads that had led to a phone call to Peter Steyn that had ended up with that successful Sunday evening hunt for Trevor and a few other lucky birders.

I was quite excited about my Monday night booking.  The pond was apparently still full of gold fish and why would the bird move when there was a store of food in the area?  I expanded my booking to include Tommy and Adam, Dave Winter and my good friends, Andrew, Olga and Nick that were the next door neighbours of the now famous tree.  I was not going to mess with the birding gods so I made sure that I took along a bottle of wine and box of chocolates as an offering for our amazingly hospitable hosts.  We took our seats on the deck and began the process of waiting for an appearance.

We were far from alone on that deck.  At least 40 of Cape Town’s most hardened birders had also managed a spot and the remainder of the week had filled up equally as quickly.  It remained to be seen whether this would be a slam dunk for all or whether there would be one lucky group to score. 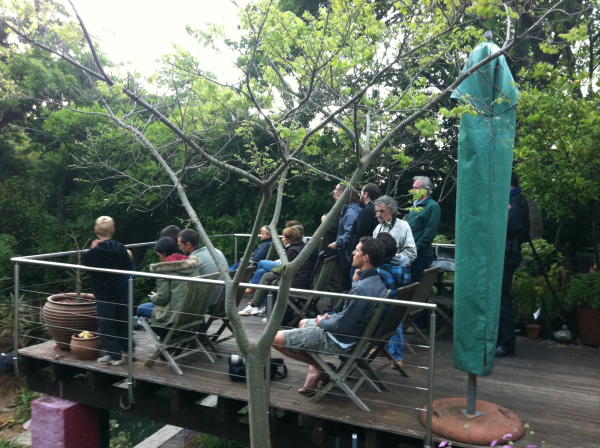 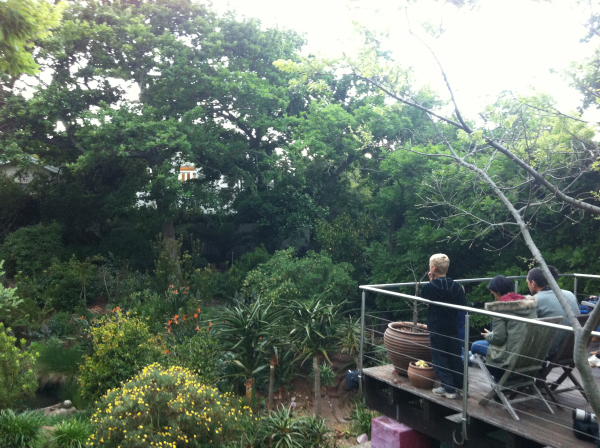 As it turned out the entire week was a disappointment.  The bird made absolutely no appearance and it seemed to have disappeared just as mysteriously as it had appeared.  Dave and I chatted about it and when I commented that I was bleak about missing out he took a completely contrary view in saying that it was absolutely amazing that one of the most sought after birds worldwide was patrolling the large trees and fishponds of the suburb we lived in.  What could be better than having such a valuable treasure to search for?  Well, maybe it would be better if we had actually managed a sighting of that treasure.

So, life returned to normal and aside from a few sorties past ground zero we did not get round to doing a full search.  We knew that it was somewhere but we may never get the chance to see it.

On the 5th of November all of that changed.

At 4:15pm some vigilant birders (I’m embarrassed to admit that I do not know who they are) had spent their day chasing up on a sighting of a Pel’s in Constantia when it was harassed by a buzzard causing it to flush into the open.  That was a morning sighting and it took them the entire day to get another sighting on Hohenort Avenue just outside the Spanish Embassy.  Naturally I was in a meeting when word went out that it was happily perched in the garden of the embassy and when I came out of my meeting at 5:15 I was horrified that I may have missed my opportunity.

I didn’t take any more chances.  I grabbed my phone and my keys and ran down the stairs to my car.  My colleagues are probably getting used to this kind of behaviour as the same thing happened sometime in March when the Little Crake was found.

I jumped in my car, keyed in the address on the GPS and hit the road at pace.  I tried not to break any traffic laws but I suspect I may have failed in that.  Fortunately I had my hands free on and it gave me the opportunity to make a few critical calls.  First was Dom Rollinson who spoke to me in hushed tones that the bird was still there.

The second call was to Jeanie.  I was adamant that the boys would get to see this bird.  My motives were a little mixed – I also needed to make sure that Jeanie brought my camera and bins with her.  I didn’t want to be in the same position as I was with the Little Crake where I had to attempt a photo with my cellphone.  Surprisingly, Jeanie did not bat an eyelid.  She said she would bring the boys and she also offered to bring all my optical equipment – she is not a great birder but she is definitely a great birding wife.

The panic was completely unnecessary.  I arrived at the grand gates of the embassy and within seconds I was standing under a big oak tree looking up at a beautiful Pel’s Fishing Owl perched on a branch as if it was the most natural thing in the world to be there.

What an absolutely incredible addition to my Western Cape list. 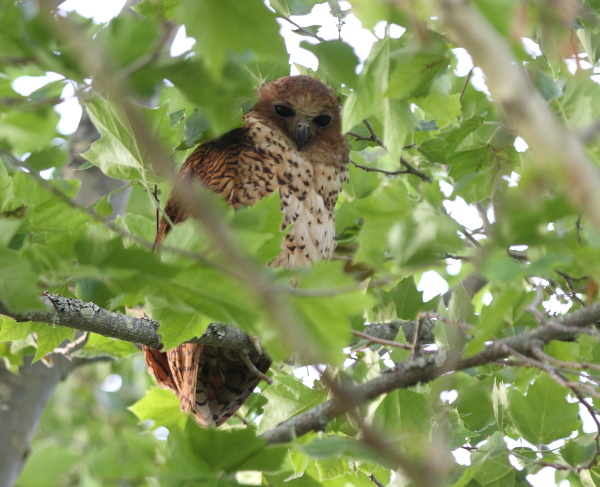 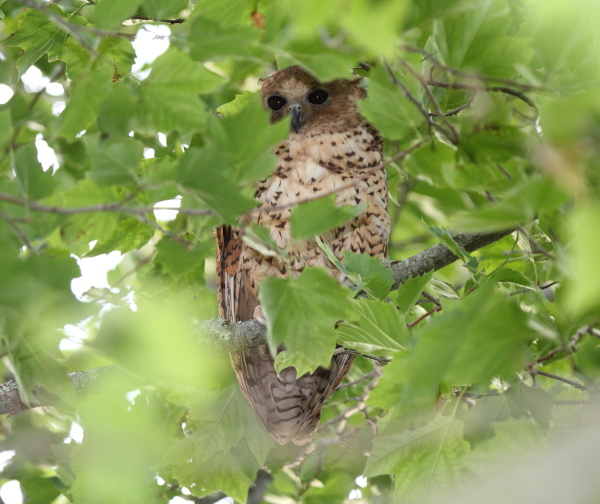 Jeanie soon arrived with my camera as did Tommy and Adam who were able to tick their first Pel’s in far easier circumstances than I had.  All in know is that bird at the Spanish Embassy most likely saved me a lot of money bearing in mind how far one needs to travel to see one.

The Spanish ambassador was apparently out of town when over 200 fanatical twitchers descended on his house.  Fortunately his very accommodating wife and son were at home for the event as it would have been tricky for all of us to peer into the property from outside the gates.  That may have looked a little dodgy too.  She very kindly stood in the driveway and opened the gate as the hordes arrived after a battle through the traffic.

Since Jeanie is not a hardcore twitcher she got her view of the Owl and then moved onto more meaningful activities like interviewing various participants at the twitch.  Naturally, her major target was the very attractive wife of the Spanish ambassador.  Whilst all the super-focussed birders were striding from one side of the garden to the other to optimise the view of the special guest, Jeanie had noticed that our poor host was getting more and more overwhelmed by the fuss that this bird had caused. 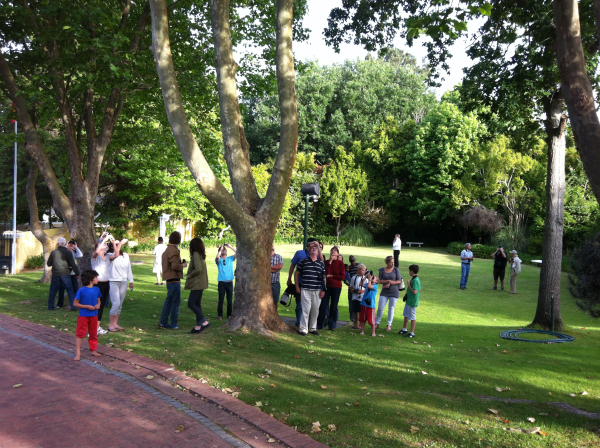 Perfect habitat for a Pel’s

Jeanie mentioned that she had become a little nonplussed at all the attention that this bird was getting and it seemed as she was becoming more and more frustrated by the never-ending stream of birders arriving at her gate.  It was actually noticeable that the speed at which the gate opened slowed down dramatically and there were a few anxious birders that stood on the outside looking in waiting patiently for it to open.

I was convinced that Jeanie was imagining this reticence but the next morning it was confirmed for me when a friend of a friend arrived at the gate of the embassy hoping that the bird had roosted in the same spot as it was the night before but was greeted by the following sign: 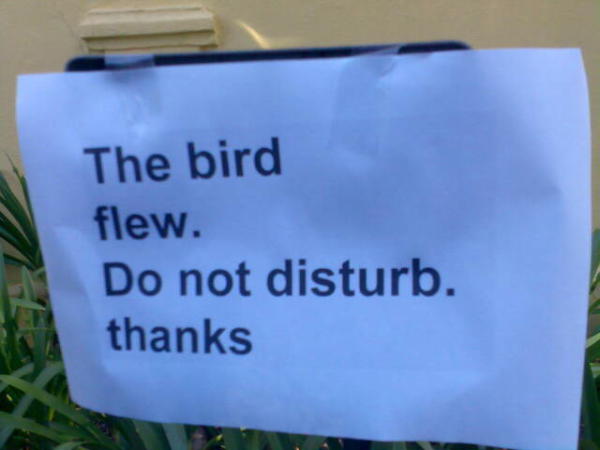 That says it all

So, there were a few people that were unlucky to miss it but fortunately Tommy, Adam, Jeanie and I were not some of those.