The glass is half full

Having had last weekend pass by without a new frog for my list meant that I was itching to get out again for something different.  Jeanie always asks the kids if their “cups are full” which is a gauge to make sure they are feeling fulfilled with life.  She applies the same principle to me and I was certainly feeling as if my frogging cup was running a little empty.

The timing of Cliff Dorse’s mail on Thursday inviting me to join him at Kenilworth Race Course on Friday night was therefore very appropriate.  He would be taking us out to look for Micro Frog which was definitely something that had been on my list of things to do this winter.

Micro Frog is yet another very special frog species in the Western Cape.  Not only is it a little tricky to find where it does occur due to its tiny size (not hard to have guessed given its name) but it is described as Critically Endangered, a title that is not bestowed without good reason.  It is known only from a few very localised pools in the Kleinmond area and the Kenilworth Race Course is the only place it occurs on the Cape Peninsula.  The central wetland areas of the race course includes a few suitable ponds and a very endangered type of vegetation that has been lost in all other urban areas in the city.

After Adam and Jack had participated in the school’s mini-Olympics on Friday afternoon Tommy, Adam, Alec (Tommy’s mate) and I met Cliff and Suretha and Callan Cohen at the race course just as it was getting dark. 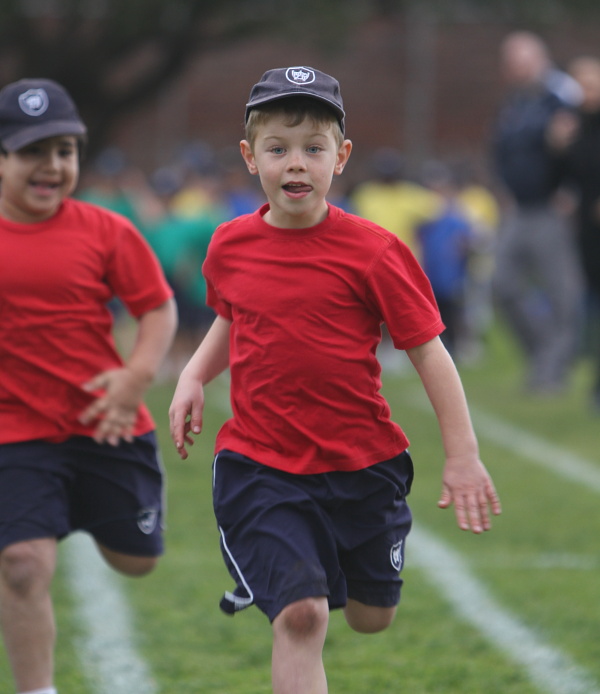 Adam in the sprint 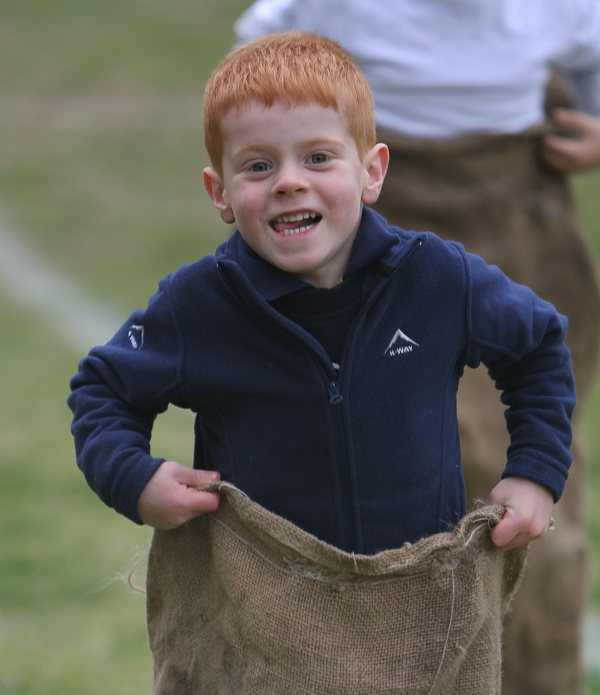 Jack in the sack 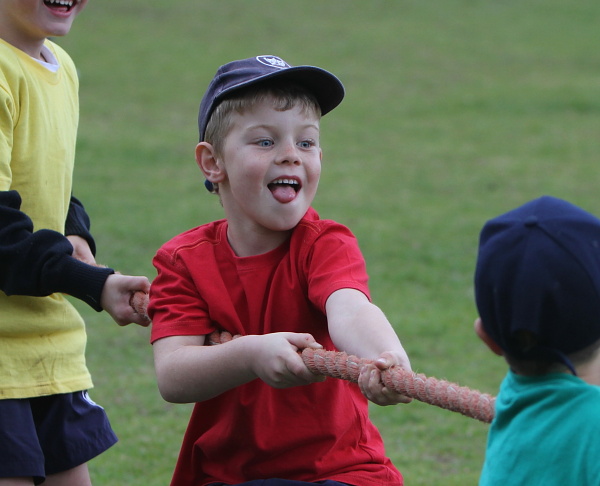 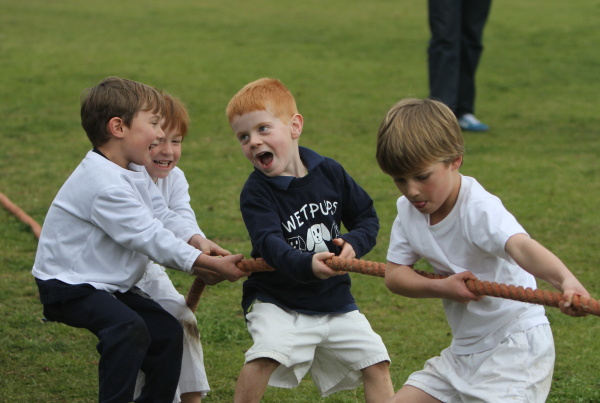 Jack in the tug of war 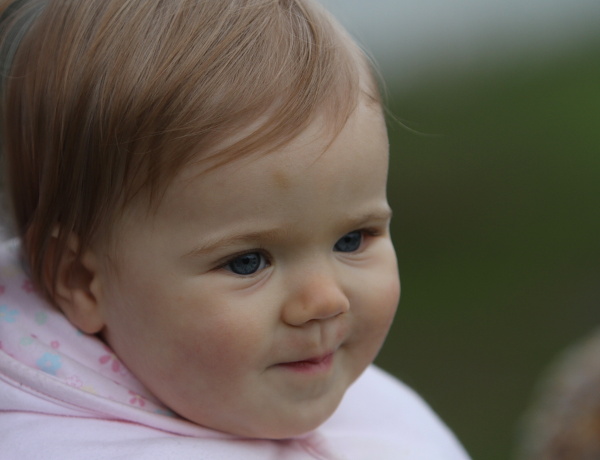 It was a strange place to be going on a Friday night and it was even stranger when other cars started arriving with all the occupants getting out wearing formal regalia.  Black tie and cocktail dresses were as far removed from our rain jackets, head torches and wellies as you could possibly get.  Whilst we would be squelching through freezing water and mud most of the visitors to the race course would be enjoying a Friday evening drink at a formal function.

We met James, the Conservation Officer at Kenilworth Race Course, who had very kindly agreed to escort us onto the property to look for the frogs.  Access to the race course is restricted for a variety of reasons and without permission from the Conservation Office, and an escort, the excursion would have been impossible.  Although James is the full time Officer at the race course I think he was even wondering why he had agreed to be wandering around in the dark for our benefit after a long, hard week.

I had asked Cliff what the modus operandi would be and I was told it involved wading “ball deep”, as he described it, in the small ponds looking for the bulging eyes of the frogs on the surface of the water amongst the vegetation.

I had dressed appropriately but somehow I expected that the boys would have dry margins to walk on whilst Cliff and I waded.  Despite them not having to get into the deepest sections it was still pretty naïve to have left their wellies at home.  Within minutes of starting our search all three boys had soaked feet.  I would have to answer to their mothers when we got home but all we could do was press on.  A few cold toes were not going to stop them. 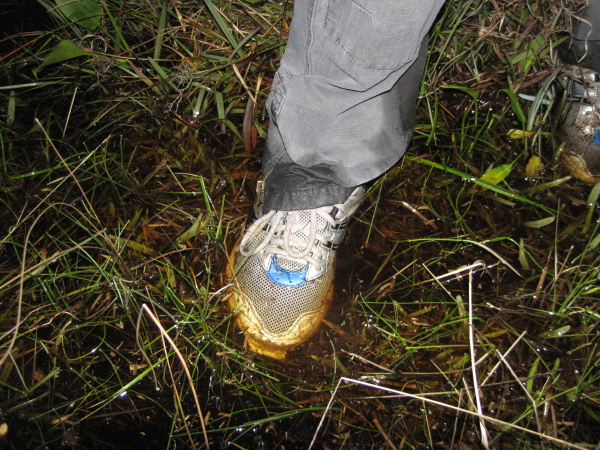 The Micro Frog calls were all around us within a few minutes of getting to the site.  I pulled my long pants off and waded into the freezing cold water.  It was cold but I knew it would be worth the effort when finding one.  My theme of relying on others to find my lifer frogs continued as James shouted from the other side of the pond that he had one.  I did question why I was standing almost “ball deep” in the icy water when he had managed to find one on the margin and avoid getting wet at all.  Perhaps it was Cliff’s Micro Frog initiation ceremony to have the newbie in his underwear standing in the middle of the pond.

I didn’t really care though as I was just delighted that we had found one.  We located a nice open space to prepare the photo and we spent a good while getting pics from a variety of angles.  It was a beautiful specimen, light green in colour with a bright yellow dorsal stripe stretching from between its eyes all the way down to its vent. 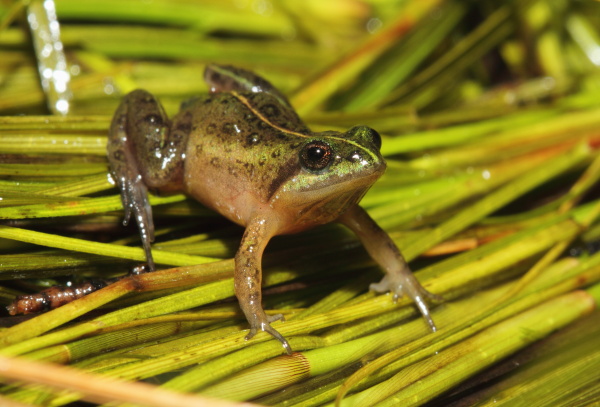 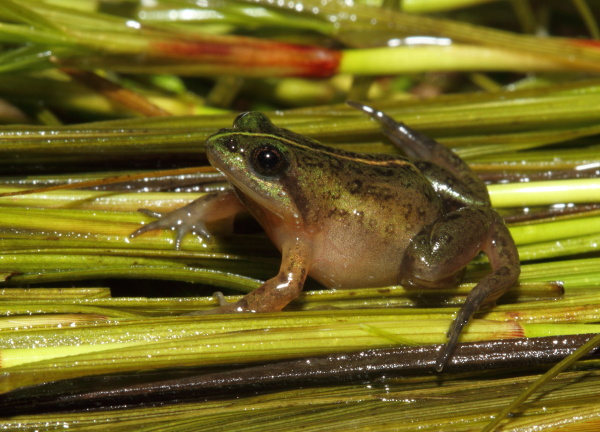 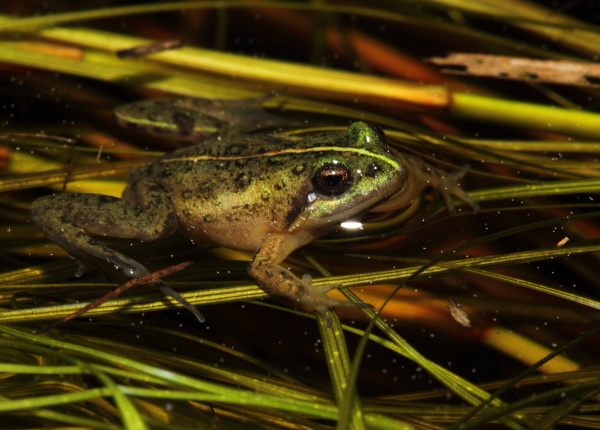 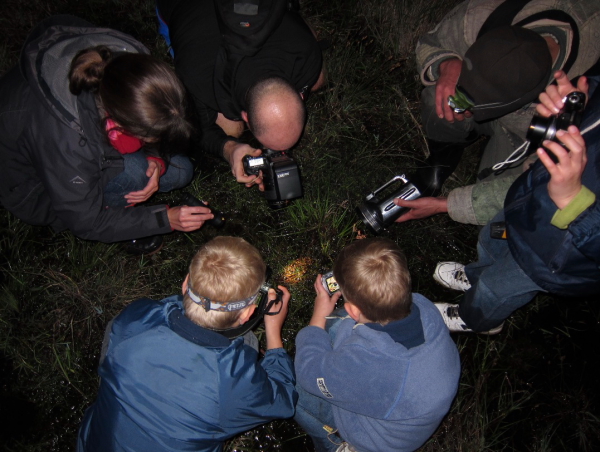 I am slowly beginning to realise that frogs within the same species never actually look the same.  Whilst birders easily separate different species visually, it is very hard to do the same with frogs.  Individuals from the same species found within metres of one another look completely different.  We found a few more Micro Frogs during the evening and they bore absolutely no resemblance to the bright green one we had seen first.  The second and third ones we found had no green in them and there was no evidence of a dorsal stripe.  Although there are very few species that these tiny little frogs could be there was always the possibility of getting it wrong.  There were plenty of Flat Cacos calling and on one particular occasion we had to look very carefully for the webbed feet of the Micro Frog to make sure we weren’t looking at a Caco.  Ironically I was quite disappointed as I was yet to see a Flat Caco and it would have been a lifer for me. 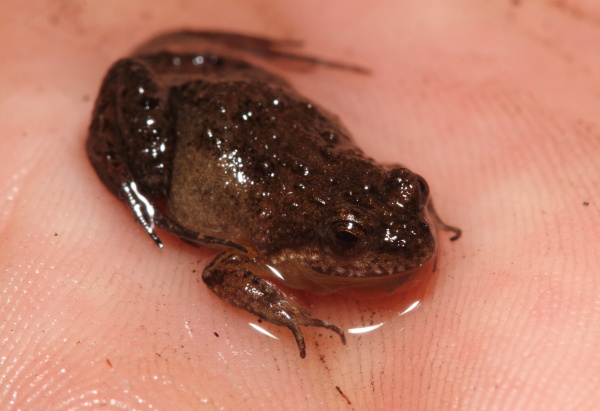 In fact, whilst we were trudging in the flooded fynbos I was bemoaning the fact that I was the most useless frog finder.  Just about every frog I had seen up until now had been found by someone else.  Tommy had found the De Villiers’s Moss Frog, my cousin-in-law, Phil had found the Bainskloof Moss Frog, Dave Winter had found the Montane Marsh Frog and Cliff had found the Cape Sand Toad.  The only frog I had found was the Cape Peninsula Moss Frog and I am pretty sure that had been a complete fluke.  I had also spent a crazy amount of time looking for Cacos and my 2.5 hours spent in a Durbanville field, on my own, in the dark, looking for Flat Cacos that were calling all around me had been a particularly low moment.

But, the natural world has a way of throwing a bone and just as I was muttering under my breath I saw a little movement at my feet and within seconds I had a tiny little frog in my hand.  I was delighted that it turned out to be a Flat Caco which had been my bogey frog up till now and it was good to finally tick that one off.  Yet another absolutely minute frog at about 2cms long but it obliged quite nicely for a photo. 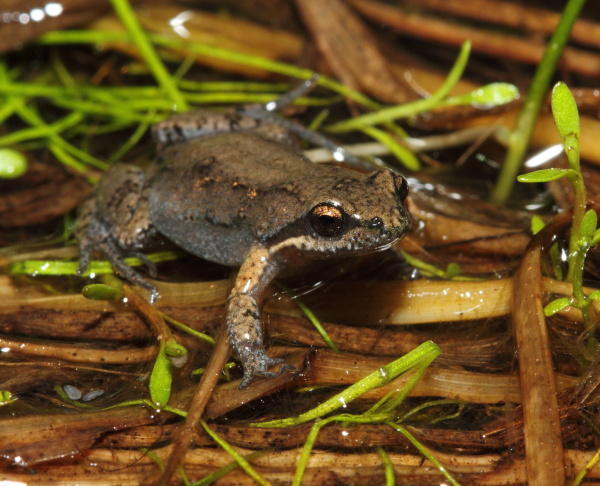 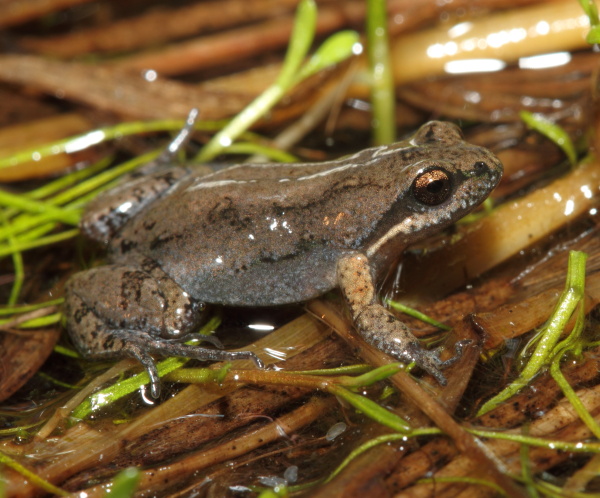 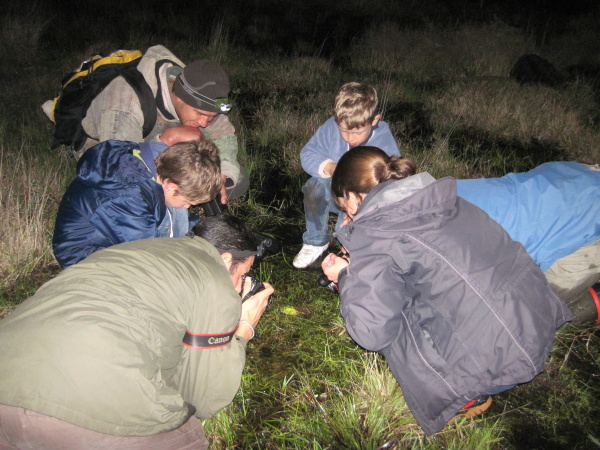 The final bit of excitement for the evening was finding a Cape Dwarf Chameleon firmly clasping a strand of restio.  Yet another reptile photographed. 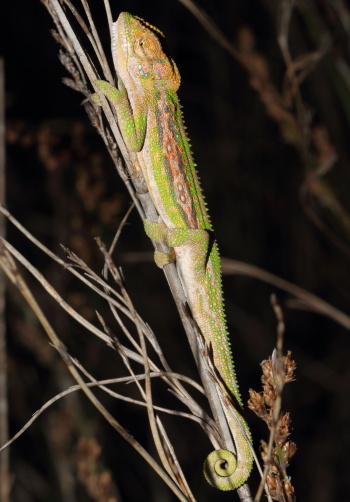 We returned home with wet feet and chattering teeth but our hearts were warmed when we got in front of the TV just in time to watch Chad le Clos winning his Silver medal in the 100m butterfly event.

Whilst Friday night had been successful, Sunday turned out to be a huge disappointment.  John Jones in Riviersonderend had found an obliging Grey Wagtail at the Riviersonderend Sewerage Works.  I had initially decided not to even consider twitching it as I had seen the one in Constantia about 6 years ago but, it was seemingly pretty reliable and Tommy did not yet have it on his list.  On a quiet Sunday morning the length of the drive did not seem to be that off-putting and we could tick it nice and early and possibly use a bit of our “pink ticket” time to see a few of the Agulhas birds before returning home by lunch time.  The thought even crossed my mind to stop in Caledon on the way back to look for yet another Moss Frog.

I have been a birder long enough to know that these extra plans were foolishly conceived.  I should have known that there was no way it would be that easy.  Perhaps I had been lulled into a false sense of entitlement with a few really easy twitches in the last few months and I had seemingly forgotten about the number of times “guaranteed” birds had disappeared into thin air.

Adam had cleverly decided to stay at home with his mom and other siblings whilst Tommy and I hit the road nice and early.  Jacques Malan had called the night before to arrange a joint attempt so it was nice to have some additional company in the car.

We arrived in a very cold, miserable Riviersonderend at around 9am, picked John up at his house and headed for the rather unattractive water treatment plant.  As far as sewerage works go, this is one of the less appealing ones but it wasn’t for the beauty of the sewerage works that we had driven all this way – rather it was the beauty of a Grey Wagtail. 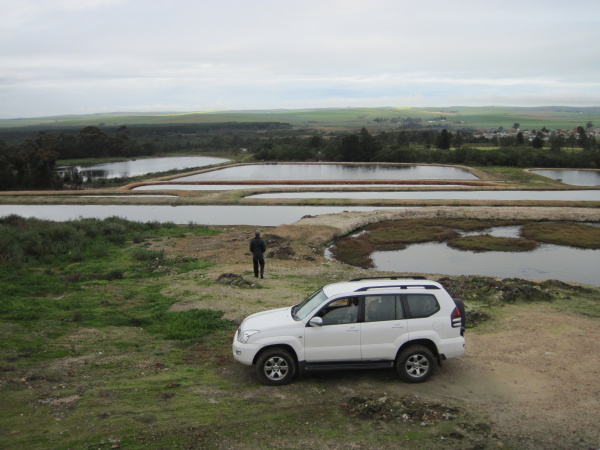 The beauty of the Riviersonderend Sewerage Works

I always knew we were in trouble when I heard the words:

“It was right here yesterday, feeding on these mossy sections”.

These were the words that came out of John’s mouth as we arrived at the spot and after 10 minutes of scanning, deep down I already knew that it was not going to end well.  In between squalls of miserable winter rain and several loops around the sewerage works there was still nothing that looked remotely like our target.  We weren’t the only ones that had made the journey – Trevor and Margaret Hardaker arrived shortly after we did and so we divided but we certainly didn’t conquer.

After 2 hours of fruitless searching we decided that we would have no choice but to call it a day.  Both Jacques and I had families waiting for us at home and the conditions certainly didn’t indicate any good reason to spend much longer at the works.  We had failed but at least we had tried.

The only small consolation was a pair of Plain-backed Pipits which was nice to get on camera. 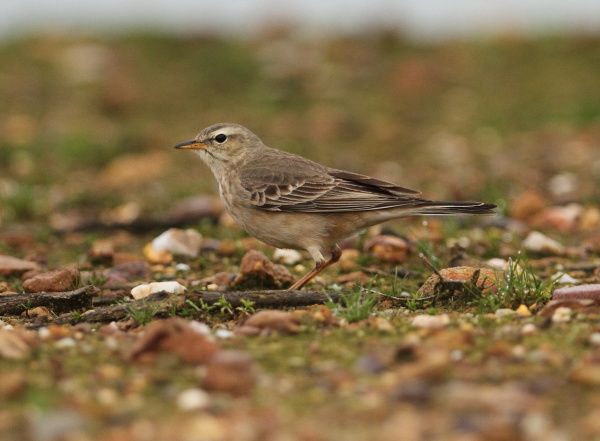 So we returned to Cape Town with our birding cups decidedly emptier than when we had left but it was certainly compensated for by an overflowing frogging cup.

3 Responses to The glass is half full