What, another moss frog? 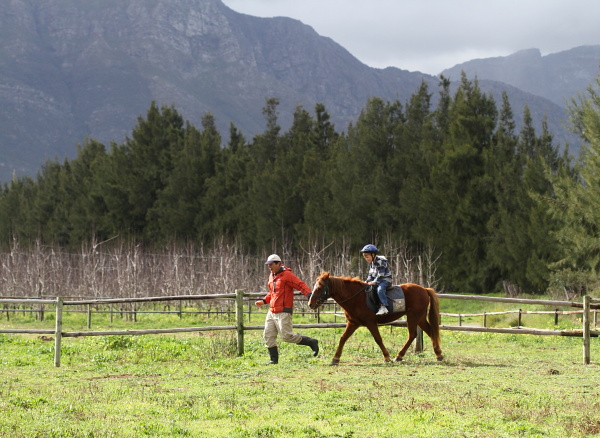 What a place for a weekend away

We returned this evening from yet another great weekend spent with Jean’s farming cousins in Wolseley.  It has become an annual tradition for us to spend what usually turns out to be one of the coldest weekends of the year with them. The reason for the visit is always the Wolseley Mountain Bike race which Philip and Michelle play an important role in organising and naturally we are extended a very welcome invitation to stay with them.

It is a real small town race with the number of cyclists in the long route seldom reaching more than 50 but this is always a major appeal for me after having recently battled through hundreds (if not thousands) of mountain bikers in Knysna at the Oyster Festival. There is nothing better than having access to some remote parts of our Western Cape mountains but not being overrun by huge numbers of cyclists.

The numbers this year were even lower than usual due to the very miserable weather predicted.  The weather sites had shown a fairly sizeable storm hitting Wolseley at around 11am and the fact that the same storm probably hit Cape Town at the same time as most people would have been travelling through made them stay at home in bed instead.  I think the official results showed that there were fewer than 30 cyclists in the long route but I was not going to be deterred.  The cloudy conditions made it a fraction warmer than expected and despite a strong north-wester gusting across the valley it had not yet started raining and I was predictably at the starting line.

It hardly rained at all during the race and aside from the strong wind the conditions were okay.  Getting the race under the belt on a Saturday morning was the best way to do it as the rain hit Wolseley at about 3pm and there was not much to do besides sit in front of the TV and watch Hashim Amla, Graeme Smith and Jacques Kallis pile on plenty of misery for the English cricketers.

I had looked at predictions during the week for the Matroosberg area and had really hoped that there would be some snowfalls during the big storm. The kids have it on their bucket list to build a snowman but the conditions were just never cold enough and a few phone calls to the mountain station kept on revealing that the rain was washing the snow away from the week before rather than dumping another frosting that the kids could play in.

So, since the snow was not coming there would have to be another outing for Sunday morning that would rival a snowman.  I am sure it is not hard to believe that a frog would be the replacement.

I knew I could rely on Tommy and Adam as companions for an outing but it was going to be a little harder to get Philip and his boys along for the ride.  As I may have mentioned in previous blogs my frogging habit has raised a few eyebrows amongst friends and family and Philip was no different. I didn’t think I would be getting too much joy out of him as a companion. My approach needed to involve a bit of a sales pitch. The target species was going to need to sell it for me.

The target species was going to be Bains Kloof Moss Frog.

We were staying no more than 15 minutes from Phil and Michelle’s farm and it would be easy to get into the right habitat quite quickly.  I also described the extremely localized status of this frog – why would they call it Bainskloof Moss Frog if there was anywhere else you could find it?  I was careful not to mention to Phil how hard moss frogs were to find – that may have been an anti-incentive to get him to join me.

My reasons for getting Phil to come along wasn’t only for his sparkling company – I needed as many people with me to help triangulate the calls and do some digging in the very thick, moist vegetation.

I didn’t realize my sales job was as good as it was until I saw Phil at his computer with a photograph of the Bainskloof Moss Frog on the screen.  He had googled it and found a pic and he was surely sold on a trip into the kloof.

We piled 4 kids into the car (two of Phil’s and two of mine), donned the wellies and rain jackets, packed a few snacks and headed south.  I made my customary call to Cliff Dorse to get the most reliable gen possible and although he was confident we would hear many of them calling from the seeps and moss covered rock faces he cautioned me that this one was particularly tricky to get.

We had had great fortune with the De Villiers’s Moss Frog last weekend and Cape Peninsula Moss Frog was just about my first frog ever but could our run of luck continue?

We arrived at the kloof and soon found the right habitat to start listening.  We had a false start on one slope with a scramble in some thick stuff being a waste of energy and a waste of precious time given that we had Luke Dicey with us who was not likely to have the same patience levels as the rest of us.  At the age of 4, we couldn’t really have expected him to anyway.

The Bains Kloof pass is a truly spectacular one.  Sir Thomas Bain is responsible for some of the most beautifully constructed passes in South Africa and this one carries his name as it must be one of the best.  The evenly spaced stones along the road edge, the tightly packed slate rock walls building up the road and the wonderful rock overhangs are all things that you are unlikely to see in the modern era where roads, bridges and passes are built by machine rather than by hand. 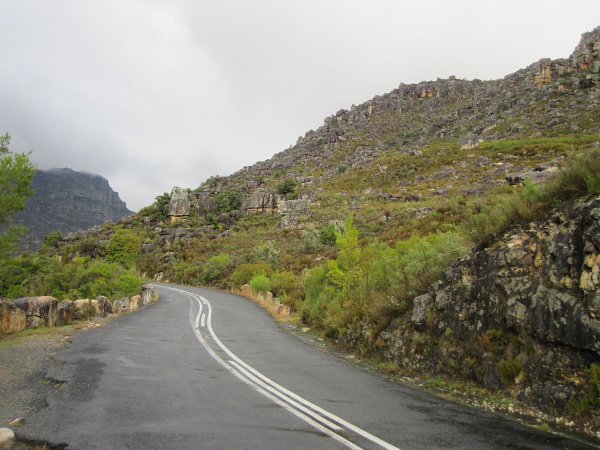 A section of Bains Kloof Pass

The one problem we had as a result of the tight efficiency of the road meandering up the kloof was that there was precious little space for us to search for the frog along the road.  This was particularly relevant since we had 4 young kids with us and safety needed to be a priority.

The cliff drops down to the eastern side and the western side is fairly un-climbable.  It meant we would need to walk alongside the rock faces in the gutter of the road and make sure we were aware of any traffic which thankfully was very light in the cold weather, early on a Sunday morning.

We quickly found a spot which was perfect.  Well, I say perfect but looking at it it seemed far from being so.  There was lots of cold, wet moss, a wet cliff face and a restio covered hillside.  I suppose it was also perfect in that I could hear quite a few frogs calling in the depths of the vegetation.  But, hearing moss frogs is quite a different thing to actually seeing them and before long the 6 of us were listening carefully for one that was close by that we could narrow down in some vegetation that wasn’t too thick. 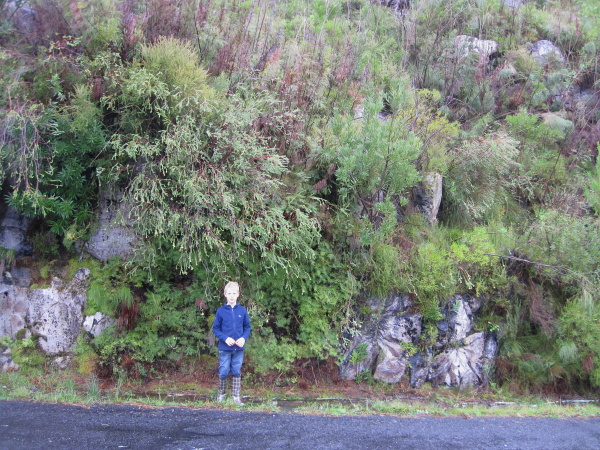 Moss Frog habitat - where do we begin? 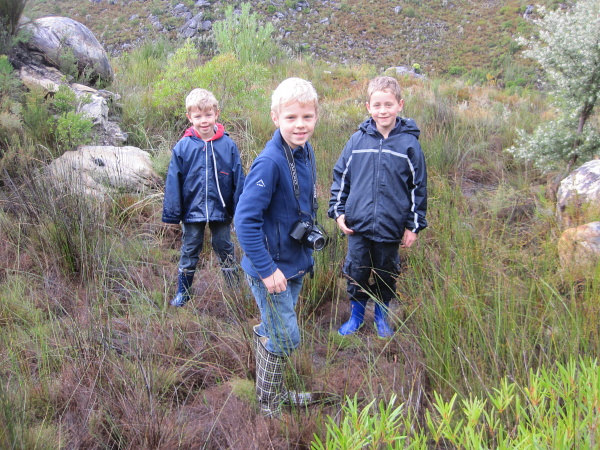 That was never going to happen as the vegetation seemed to be extremely thick no matter where one was calling from.  It didn’t seem to deter my little frog-searching minions and fingers and hands were stretched into the depths of the moss trying to find one of those tiny little frogs.  Before long most of us were completely wet as the vegetation was drenched following the rain overnight. 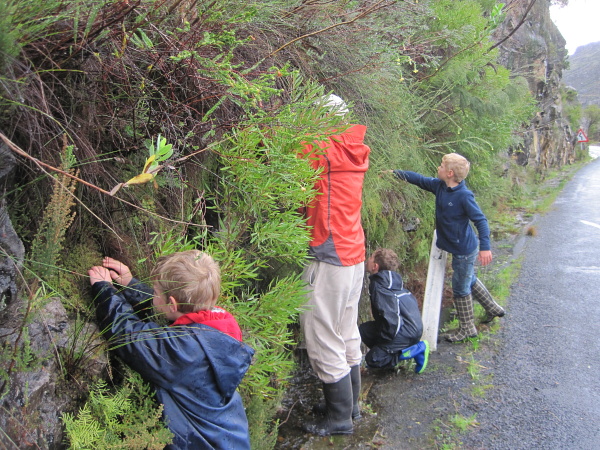 So, this is how it is done?

At one point I decided we should get a little away from the road so Phil and I pushed the kids up onto the slope and their little bodies were half buried by the fynbos but at least they were off the road.  The problem was that the vegetation was just too thick and Phil returned to the road to resume an apparently easier search. 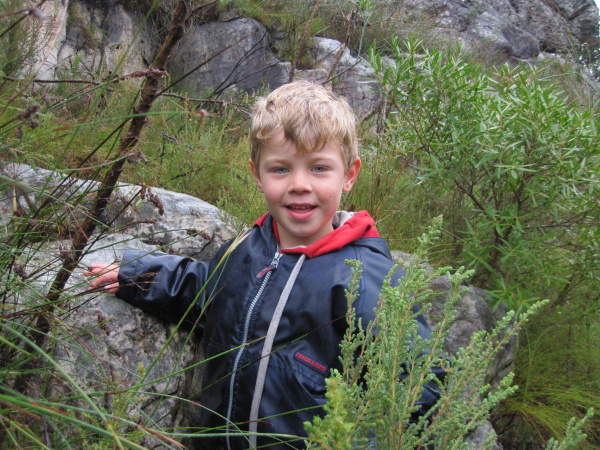 Adam in the thick stuff

Well, that was a good call.  A minute or two later I heard a bellow from below me:

I had a few moments of disbelief but within a second or two I started shouting back:

The problem was that Tommy, Adam and I were stuck up on the slope and it would take us more than a little while to disentangle ourselves.  In a flurry of boots, jackets, legs and arms we tumbled down, back on to the road where Phil was standing with his hands still clasped around his little treasure, too nervous to open them for fear that it had mysteriously melted away and we would never believe he had one in the first place.

Once he did open his hands it was thankfully still there.  A tiny little moss frog. I couldn’t believe this was already my third moss frog and frogging was only about 6 weeks old as a pastime in my life.  We placed it carefully on some moss and I set about photographing it. 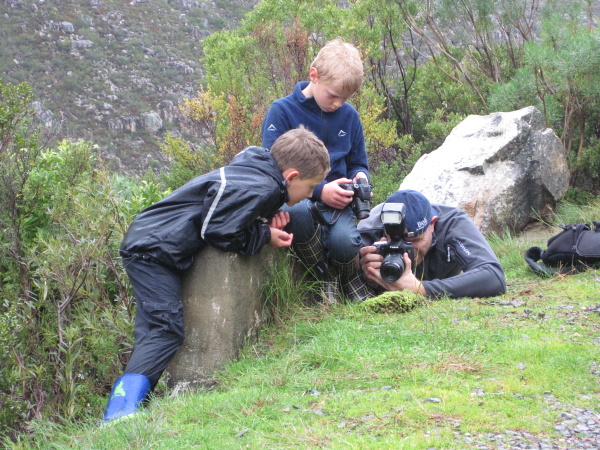 At last a chance to take a pic 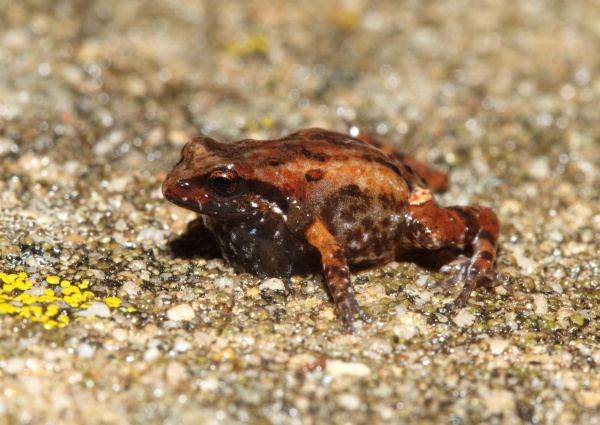 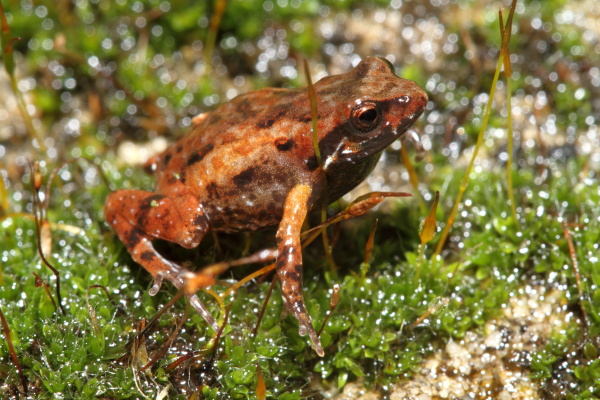 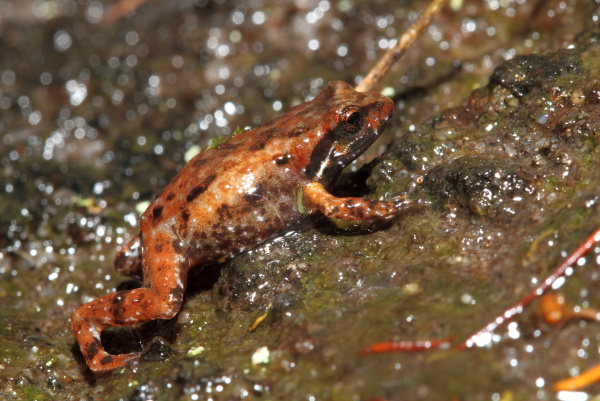 It seems as if finding the frogs is far easier than photographing them.  I am yet to capture a moss frog decently with the camera and despite trying a few different things the pics are still a little mediocre.

I was also amazed to notice that after a few minutes of helping out with the photo Phil was back at the rock face looking for another one.  Needless to say he didn’t find one but I am still eternally grateful for his ability to find this one.

The kids were well rewarded for their patience with a few sweets that we had packed and after we were done with the pics we were back in the car heading home.  I think Luke was mightily relieved that there were no more frogs to find. 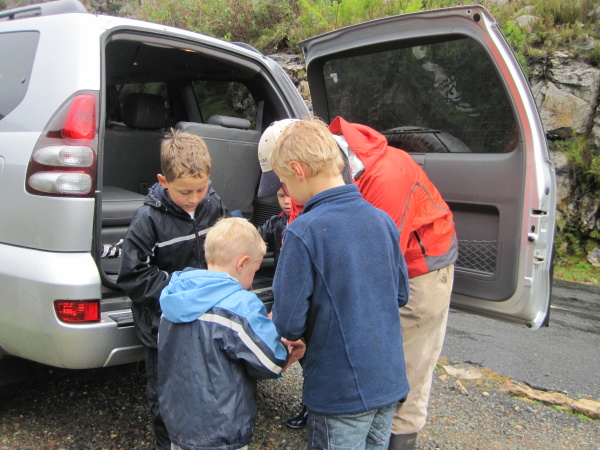 We got back from frogging and there was still plenty of time for the kids to have a ride on the farm horses.  Jack had missed the frog outing but the smile on his face for his first ride was the biggest one we had seen from him the whole weekend. 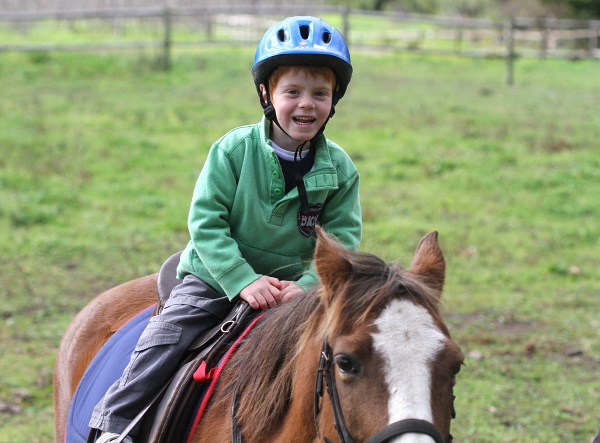 A big smile from Jack 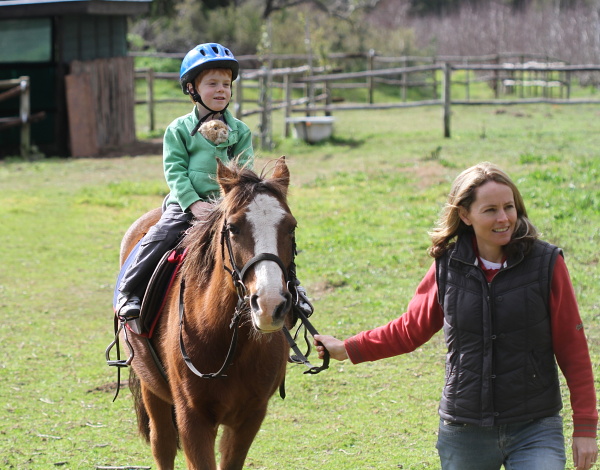 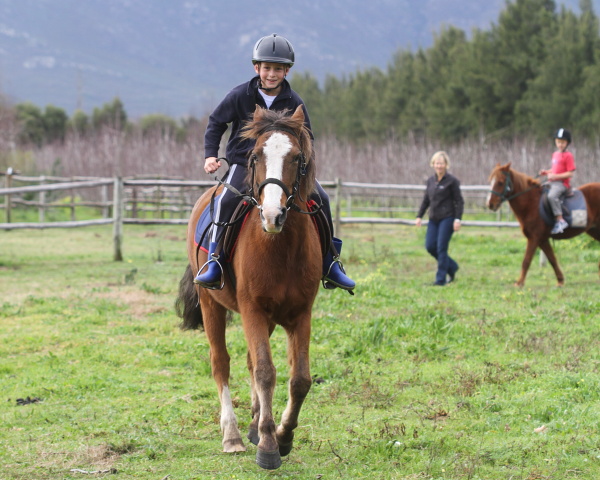 Robby showing us how 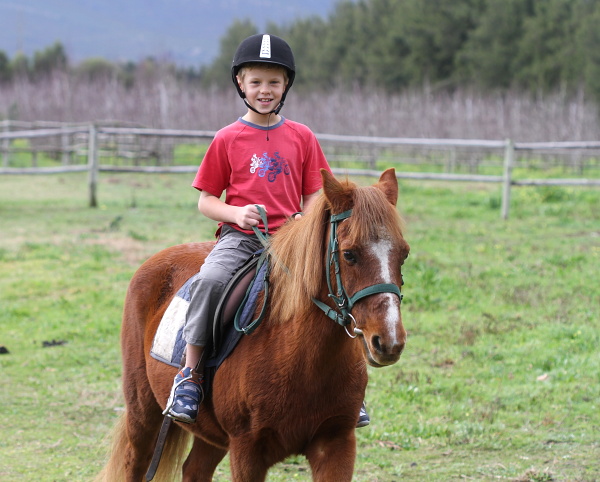 Tommy getting the hang of it 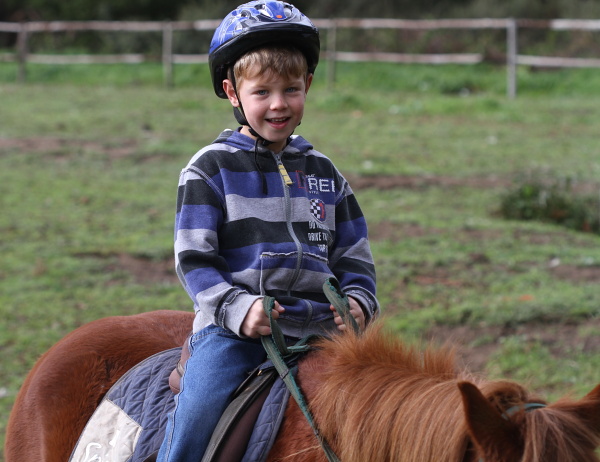 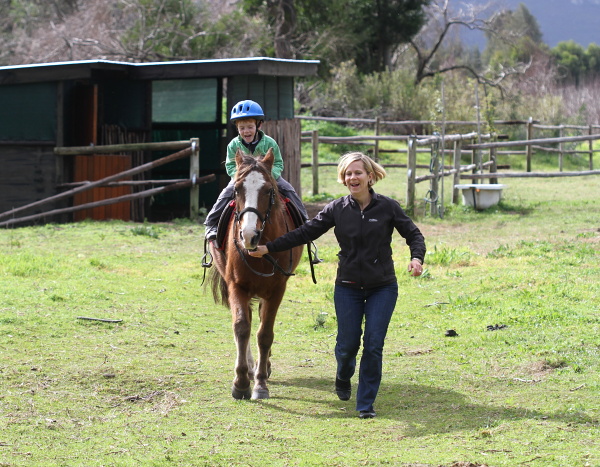 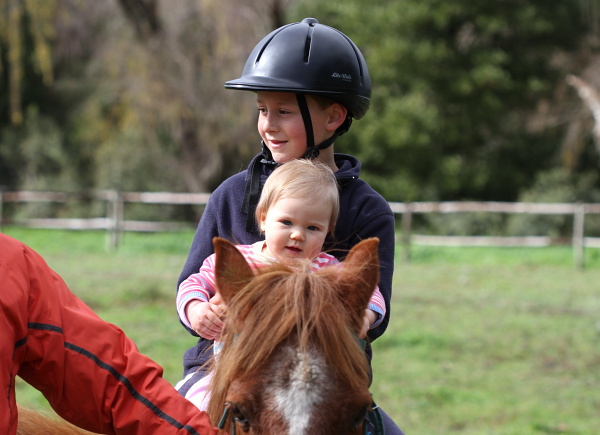 Even Emma had a turn with Robby 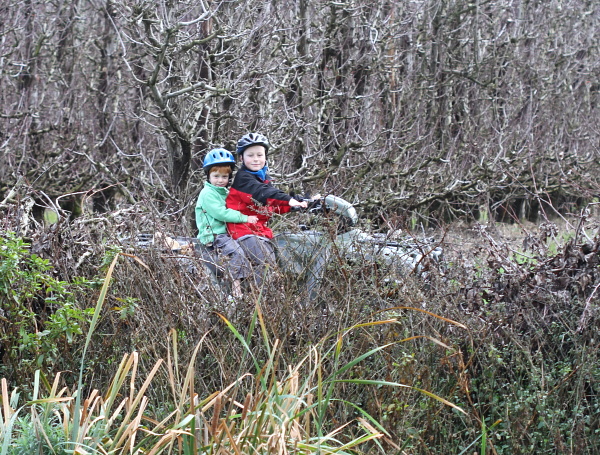 Jack and Chris on the quadbike

I had thought that the moss frog was gift enough for the weekend but we arrived back in Cape Town just in time for me to watch the last 5 holes of the Open Championship where Ernie Els’s victory topped even the number of runs Hashim Amla scored against the English.

What a great weekend.  Thanks to Phil and Michelle for having us again.  I do hope they keep our places for next year.

2 Responses to What, another moss frog?