This most recent week saw some of the most unpleasant weather hit the Western Cape we have seen for some time.  Snowfalls, floods, freezing conditions and blustery winds were commonplace along the Southern Cape coast.  The Peninsula seemed to be relatively “well off” in that most of the bad weather skirted by and left us unscathed but it was going to be a very cold weekend and for the first time in absolute ages I decided it was actually too cold for me to brave a 5am start on my bicycle on Saturday morning.

Instead of getting some exercise on my bike, Tommy and I hit the trail in Newlands Forest in search of some more frogs.  This was definitely going to be a weekend free of any birds.  As I am telling all my mates who think this frogging thing is completely bizarre, it is very complimentary to birding in that these miserable days that are unlikely to yield any decent birds are very likely to give us some good conditions for frogs.

So, despite that being my chosen line to justify the frogging, we saw not one single specimen during a 3 hour traipse across the mountain.  The frog we were looking for was another Breviceps, Cape Mountain Rain Frog.  Although being regularly heard whistling in the distance, they are pretty tough to find and our approach was to look for them under rocks and logs in the forest and the fynbos-clad slopes.  We turned over plenty of logs and all we got for our troubles was a few Marbled Leaf-toed Geckos and not a single frog of any description. 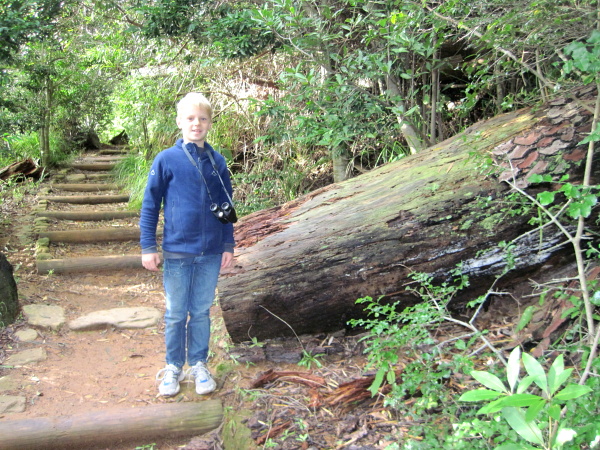 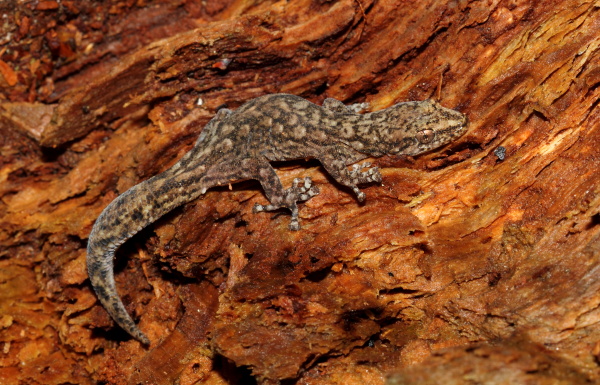 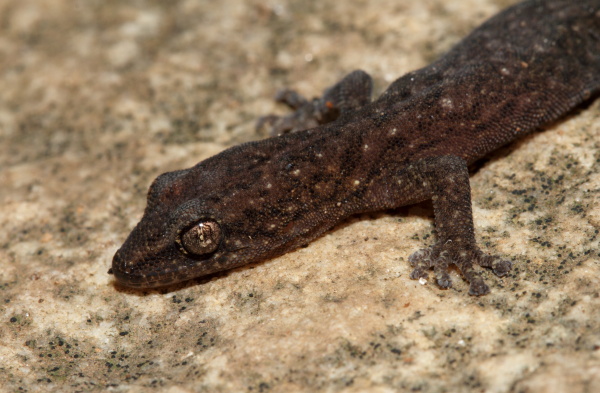 I suppose, given my comment about this time of year being lousy for birding, it was a great surprise to bump into a bird that I had never seen before on the Peninsula.  We were up on Woodcutter’s Trail and I heard the distinctive, scratchy contact call of a Blue-mantled Crested-flycatcher.  I have to acknowledge that I initially thought it was an African Paradise-flycatcher but quickly changed my mind bearing in mind it was mid-July and the nearest Paradise-flycatcher was likely to be more than 6000kms away.  A few minutes later and a bit of patience revealed a pair of the birds and fortunately the female perched long enough on an exposed branch for me to get a quick snap with the Macro lens.  It seems as if my 100mm lens is being called into action way too often but the thought of slogging up the mountain side in the miserable weather with a big heavy lens was quite unappealing.  Or, perhaps I am getting a little soft? 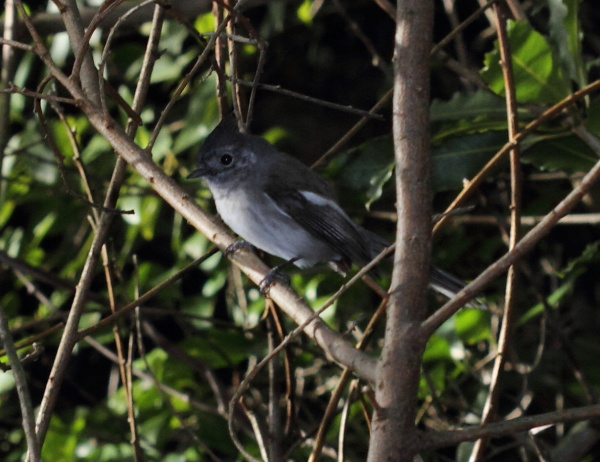 The flycatcher was a real highlight of the walk and prompted me to do at least an hour of atlassing in another section of the pentad to justify the submission of a card for the weekend.  It was important to get such a significant record on a full protocol card.  It was certainly the first record of that species since the atlas period began and given that there are over 150 cards for my home pentad it was well worth ensuring it was officially added to the pentad list.  We therefore visited the Liesbeek River on a freezing cold Saturday afternoon and pushed the card up to a decent count. 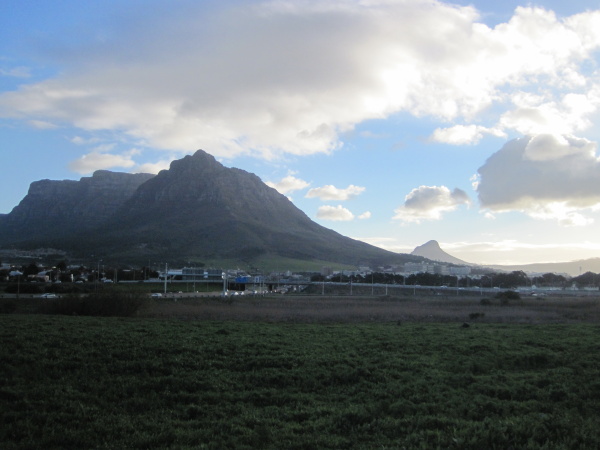 A miserable Saturday afternoon for atlassing

I did feel, though, that the weekend needed a little more action to be considered a busy enough one to fit the Buckham standard.

In my search for new frogs for my list I pinpointed a Montane Marsh Frog as our next target.  The Montane Marsh Frog is yet another Western Cape endemic, remarkably only being discovered in 1989.  This fact completely amazed me.  The Montane Marsh Frog is not particularly furtive, it has a very loud, distinctive call and it occurs in relatively accessible areas within striking distance of Cape Town.  Certainly not a combination of factors that would make it such a difficult animal to find.  Once again, Trevor Hardaker and Cliff Dorse were the source of my questions about this frog and with a set of GPS co-ordinates situated in the Kogelberg Nature Reserve just outside Kleinmond I had what I needed for my search. 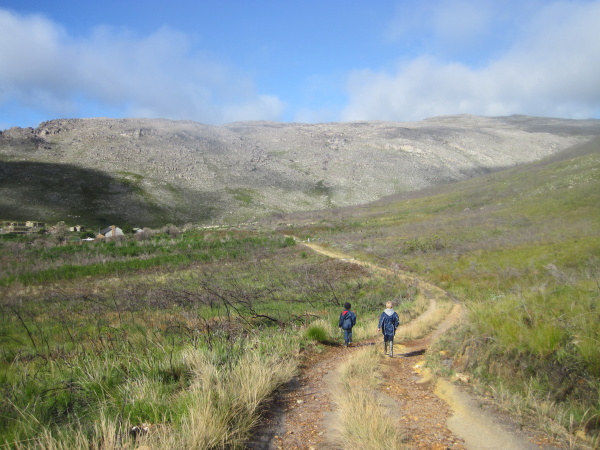 Tommy and Adam were not going to miss this adventure and once we had our pink ticket from Jeanie we set off from Newlands this morning at 7am with a rendezvous with Dave Winter in Betty’s Bay before heading to Kogelberg.

The weather was far worse on the way out than I had expected.  The prediction was for rain in the latter part of the day but a steady rain followed us all the way to Betty’s Bay and constant questions of my sanity swirled in my head.  I had forsaken a relaxed morning with my wife and a warm duvet for several hours of searching for tiny little frogs.  Furthermore, my success rate of late had been very disappointing with searches for Cape, Boettger’s and Flat Cacos, Cape Mountain and Sand Rain Frog being completely fruitless over the last few weekends.  Why would I subject myself to another cold, miserable pointless search?  We had to come out the other end of this excursion with something to show for it.

Remarkably, the weather seemed a little milder in Kleinmond and so the 4 of us donned all our wet weather gear as a precaution and started our long walk to the spot we had been given.  We immediately heard the chorus of De Villiers’s Moss Frogs in just about every bit of vegetation around us but we would not be distracted by impossible moss frogs on our search for the Marsh Frog.  It was also not long before we started hearing the distinctive call of the Marsh Frog but it was coming from a long way off the path and so we stayed our course to the co-ordinates which were apparently right next to the jeep track.  After 2.5kms of hiking up the road we decided it was a lot further than we had expected to our spot and the first calls we heard from then onwards we would chase.  The weather was also starting to look a little more miserable and I wondered if the boys had the staying power for more hiking.

It didn’t take long before we heard another batch of them and we decided to cut our losses and head straight into the veld.

We found a perfect patch of habitat with lush restios, small slow moving pools and dark algae lining each of the pools.  Cliff had told me that this was the spot where we would find the Marsh Frog.  The problem was that as soon as we got close to the prime spot the frogs went silent and we spent a good while staring at each other waiting for the chorus to resume.  It never really happened.  We also tried to rummage in the lush areas to find the source of the calls but it was real hit and miss. 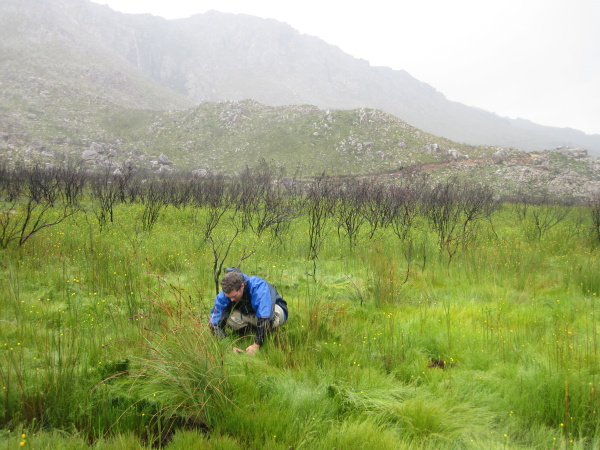 Dave searching for a Marsh Frog

We then decided to move a little away and follow another calling batch quite some distant away.  I marked the original spot with my umbrella and we left it pegged in the marshy ground.

After about 15 minutes at the new spot I suddenly heard Tommy shouting frantically that he had found one.  I squelched the 10 metres to cross the distance to where Tommy was and Dave had already got there and cupped his hands under Tommy’s to make absolutely certain we would not lose our quarry.

We needn’t have feared.  The look of absolute delight on Tommy’s face showed that he had not lost his find and it was still comfortably in his hand.  He slowly opened his hand and we peered inside to find something that was certainly not a Marsh Frog.  This little thing was far smaller, much paler and had the distinctive hunched back of a moss frog.  Tommy had actually achieved the impossible – he had found a De Villiers’s Moss Frog!

We couldn’t believe our luck.  This was a creature we had dismissed as being virtually impossible to find and here one was.  We carefully found a spot to take some pics and enjoyed the moment of adding a second moss frog to our list.  We only had about 12 species on our life frog list and we already had 2 moss frogs amongst them – totally unexpected.  It was also Dave’s first ever moss frog and he now had to accept that they actually did exist.  It was amazing to see how small it was when seeing it on Dave’s finger – virtually smaller than his finger nail. 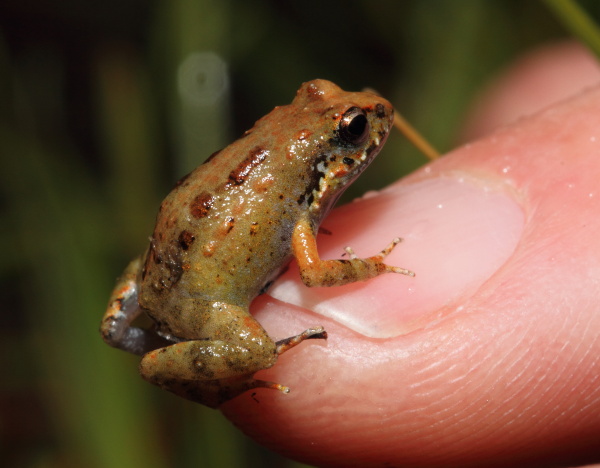 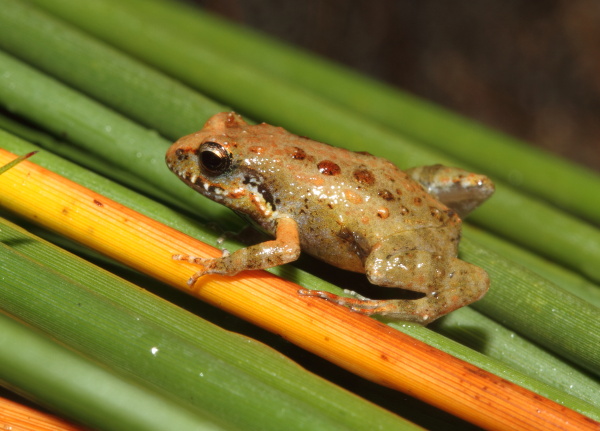 After a good photographic session (which never really yielded any significantly decent results as the rain started to come down) we returned the moss frog to the patch where Tommy had found it and returned to the main task at hand of finding the Marsh Frog.

As Cliff had suggested the Marsh Frogs had gotten used to our intrusion and their calls started ringing around us.  It was a matter of time before we actually found one.  It wasn’t as easy as we expected though as the dark little pools just seemed empty of life and I was starting to lose hope until Dave shouted that he had one.  What a relief. 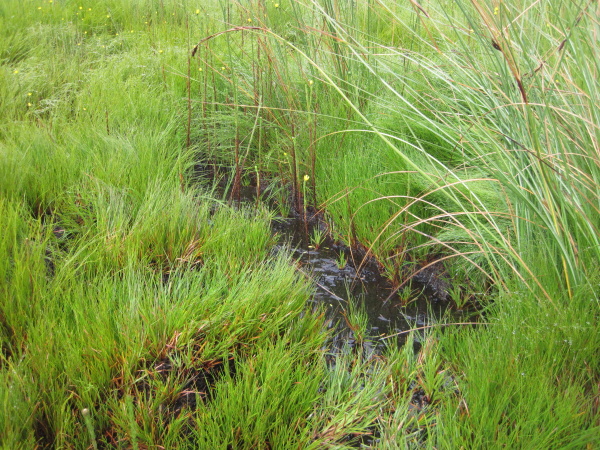 We put it in the open and took more than plenty of photographs.  The strategy was now established and whilst Dave and I took some pics, Tommy and Adam continued with the search for more of them.  Within minutes it seemed a piece of cake and we had 6 of them found with Tommy leading the charge with 3 including 2 tiny juveniles. 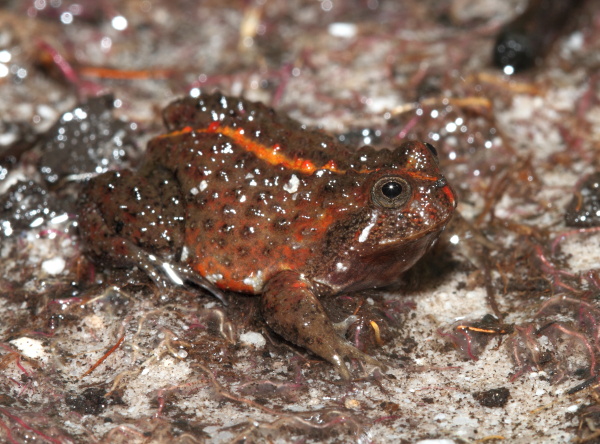 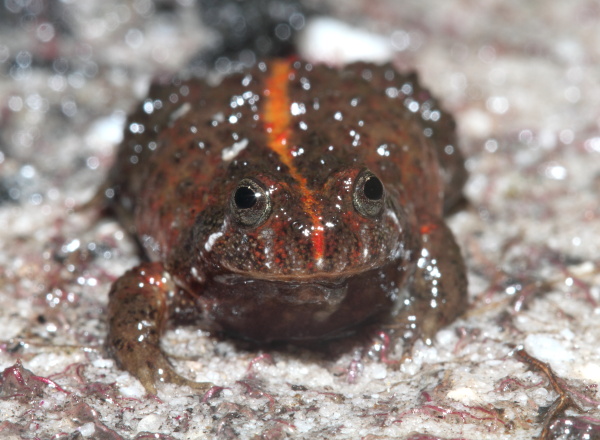 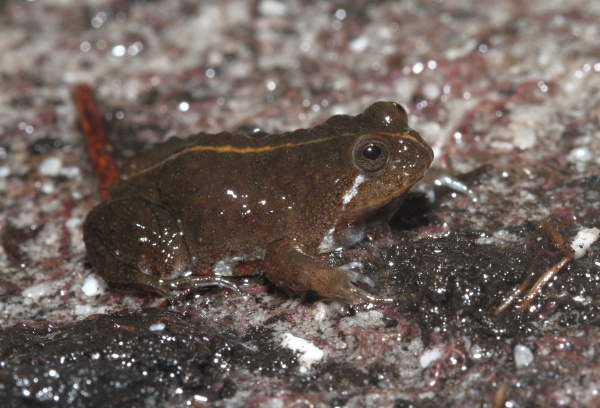 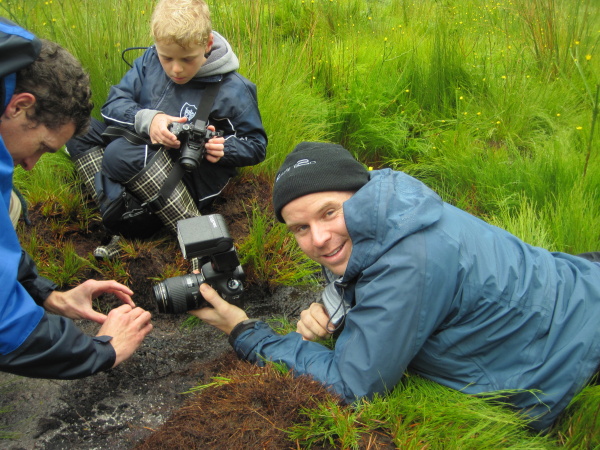 Happiness is a photograph of a Marsh Frog

It was interesting to note that all the frogs we found were within 2 or 3 metres of where I had pegged the umbrella – in the end it actually turned out to be a pretty good marker. 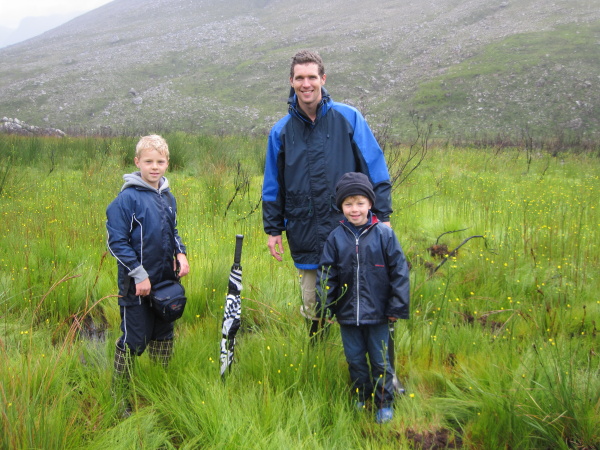 The umbrella marks the spot

The expected torrential rain never materialised and by the time we left the Marsh Frogs the sun was out on the mountains and it was a relatively lovely morning. 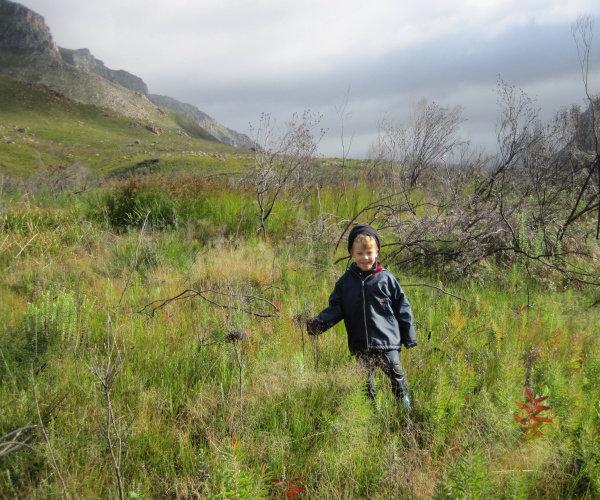 We returned home totally satisfied with our haul.  Two lifer frogs was more than I had expected and some really special ones as well.  We had finally proved that our frog jinx was over and although we know there are some tough times ahead in finding more of these creatures at least the confidence has returned.

5 Responses to Montane Marsh Frog and a few extras