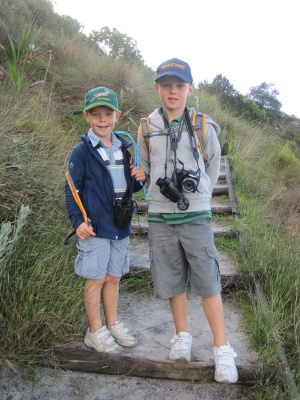 Tommy and Adam on the Dads and Lads hike

My frogging interest had certainly had a very slow start.  After about a month of concerted effort to find a frog, just any identifiable frog, I was still left empty handed.  Sure, I had taken a few pics but all of them were of juvenile frogs and the ID was being corrected on a minute by minute basis – I was still unsure if I was looking at a Cape River Frog or a Clicking Stream Frog.

Over the course of the time that I was desperately seeking a targeted frog I made a concerted effort to learn a few of their calls.  Luckily the variety of frogs in the Western Cape is pretty limited and I had narrowed my search down to Cape Rain Frog, Cape Mountain Rain Frog, Clicking Stream Frog. Banded Stream Frog and Cape Peninsula Moss Frog (known also as Lightfoot’s Moss Frog).  These were the ones that I would have some chance of seeing in and around Cape Town so I made sure I knew what they sounded like.

I had had one attempt at a rain frog in Silvermine Nature Reserve and that had ended disappointingly and wading through streams in Silvermine, Kirstenbosch and rivers in Newlands had left me with cold feet and no sign of any Cape River Frogs nor Clicking Stream Frogs so I was not doing well.  It was going to require some kind of miracle to keep the boys interested.  At least with the birding we would always return with at least some birds under our belts.

The strangest thing happened on our “dads and lads” walk with the school last weekend.  We hiked all the way to the dams at the top of the mountain and on our way back to Constantia Nek on the concrete road we started hearing the unmistakable call of the Cape Peninsula Moss Frog on the moss-laden rock face alongside the road near the service road bridge. 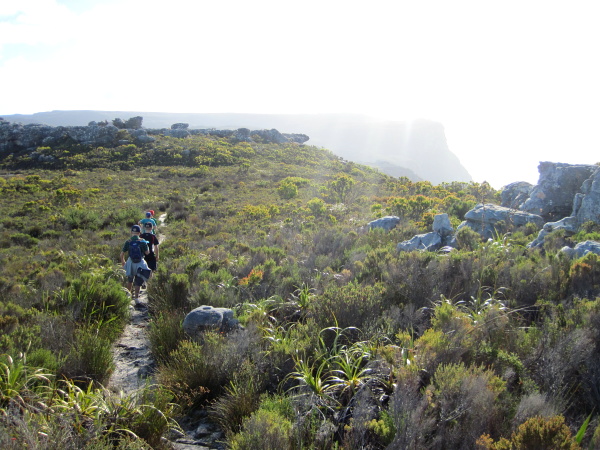 It was pretty exciting to just identify the call never mind find the frog.  We had limited time to search amongst the moss and I had read in a blog by Trevor Hardaker that moss frogs are the flufftails of the frog world so I knew it was not going to be simple.  Since it took me about 30 years of birding before I saw my first flufftail I didn’t have any high hopes.  Also knowing thatTrevor is yet to knock this species off on his Challenge list (see here for details on that) I was pretty sure we were wasting our time.

I was given some pointers by Cliff Dorse about finding moss frogs and it sounded simple enough but it is never that easy in practise.  Cliff is also the reputed moss frog guru so one has to divide his success rate by about 10.

He told me that the key to finding them is to triangulate the call from a certain patch in the moss, get within 30 cms of it and then rummage around in the moss until you see a tiny little grey thing in amongst the damp and there you have it.

Piece of cake? Well, not really.

The first issue is triangulating the sound.  It is nigh on impossible to pinpoint exactly where the call is coming from.  The croaking is ventriloquial and just when you think you know where it is coming from it suddenly seems to be a metre above where you thought.  Cliff also cautioned me not to be distracted by the other individual frogs in the same area as there might be more than 5 frogs in a space of less than 10 square metres.  It is so easy to be distracted and move from one to the other as they call alternately.

The second issue is that these little creatures are small.  I mean, really tiny. They are about the size of a thumbnail, they are very well camouflaged and they don’t want to be found.  As soon as they hear you are close they stop calling and you can forget about finding them.

And, finally, their habitat is wet, mossy patches which vary from thick to impenetrable.

I was relatively delighted about the spot I had found for them though.  The cliff face was not as thickly covered in moss as other areas I had heard them call and it didn’t seem impossible to find one in the sparser areas.  The calling frogs were also at head height making it easier to stand silently and wait for them to call.

Unfortunately time ran away from us on the hike as I was flying to Dublin that night and I had a ton of admin to do before packing my bags.  We dragged ourselves away from the cliff face and returned home with nothing.  I didn’t really expect to find one but my boys were starting to wonder whether this was all worth it.

Fast forward a week later and I woke up on Father’s Day and was showered with gifts from all my kids.  It was a good way to start the day but when I was given the choice of doing something as an outing with my boys I didn’t hesitate in suggesting another traipse up the mountain for another bash at the moss frogs.  Somewhat surprisingly Tommy and Adam didn’t hesitate to join me but unfortunately poor Jack was recently out of his plaster cast after his broken leg and he wouldn’t be able to make the trip.

We parked at Constantia Nek and began the long hike up the mountain.  It is amazing how long the hike felt when there is an anticipation of what the reward might be.  We heard a number of moss frogs calling in several patches on the way up but these were not ideal in comparison to the spot I had found the week before.  We would have to press on.

We eventually reached the ideal spot with an open rock face and some reasonably sparse patches of moss from where there were plenty of them calling.  We set about our search with very little structure and it was not long before we had hopped between one patch and another being frustrated beyond belief by these tiny little creatures.  Admittedly we had not looked for long but I was starting to doubt whether there was any way we would ever find one. 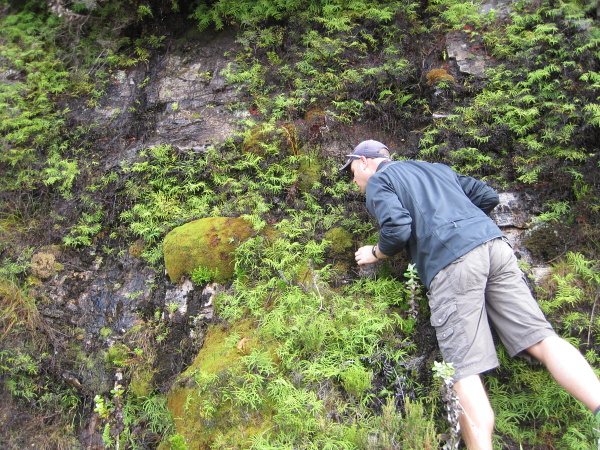 It must be here somewhere

I eventually heard one calling at head height and I was able to get very close to it without spooking it.  It carried on chirruping every ten seconds or so and with a deep breath I parted some straggly grass and peered into a dark patch of moss.

Cliff had told me to look out for a pale frog as this species is lighter than most.  There, perched in amongst the moss, was this tiny little grey frog, sitting as tightly as it could trying not to be seen.

I quickly called the boys over and before trying to catch it I pointed it out to them.  I could just see this going pear shaped with the little thing hopping away further into the dark recesses of its habitat before I could reach out and grab it.  But, it sat relatively calmly as I scooped my hand around it and pulled it gently from its perch.

In the first month of my frogging obsession I had a moss frog in my hand.  It doesn’t get better than that. 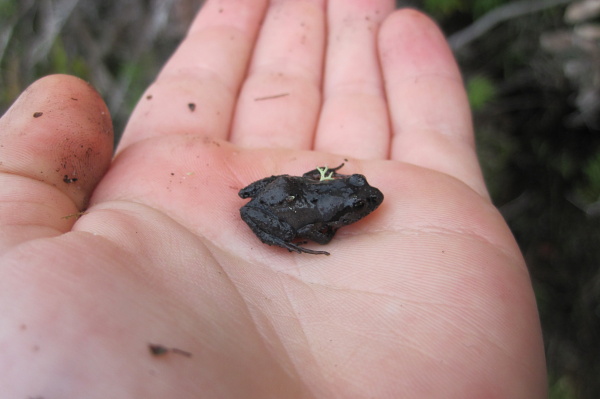 I know my wife, most of my family members and almost all my birding mates are wondering if I am finally going mad but this was a big moment.  Why is it that birds are so popular and frogs are not?  Perhaps the general “frogging” habitat is not too appealing and perhaps the slimy feel of these little creatures is a little off-putting but this moss frog was a lifer for me and it felt just as exciting as any one of my birding lifers.

In fact, Jeanie has actually admitted that she finds it easy to tell her mates that I am off birding with the boys on a Sunday morning but she is now finding it difficult to tell them that we are out catching frogs.  It is hard to believe that, for Jeanie, birding is now all of a sudden quite cool but I suppose all things in this world are relative.  Maybe one day she will understand.

In fact, no, that will never happen. 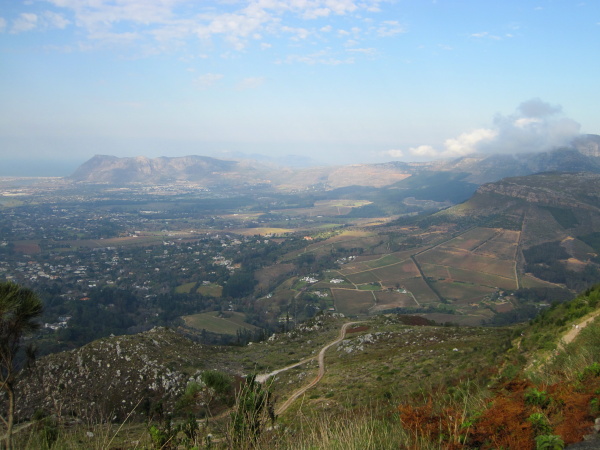 A long way up but worth it

After its initial capture it seemed to be a little frozen with shock – it certainly had not ever been handled by a human before – but once it got over that it was hard to contain.  I didn’t expect this to be much of a hopping frog (Cliff having told me that moss frogs are a little clumsy) but this one soon found its legs and was jumping all over the place.  I quickly put it down on some moss and set about photographing it. 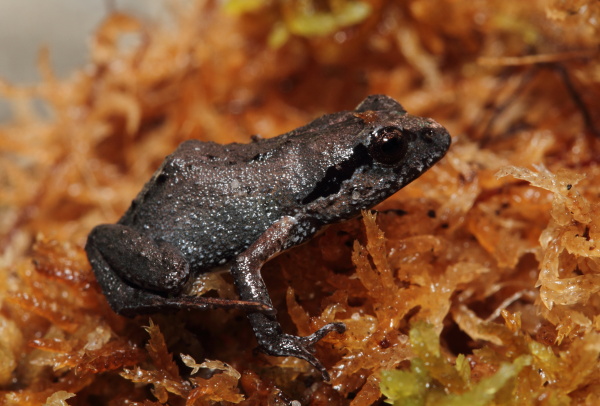 Photographing frogs is a whole new experience.  Although one does get very close to the subject, it has rather erratic movements that are hard to predict and getting the lighting and depth of field right is very difficult, particularly when I am programmed to photographing birds.  I eventually got some passable images (I still have plenty to learn) and soon the little fellow was back on its rock face where it disappeared back into the moss and was calling away as though nothing had happened. 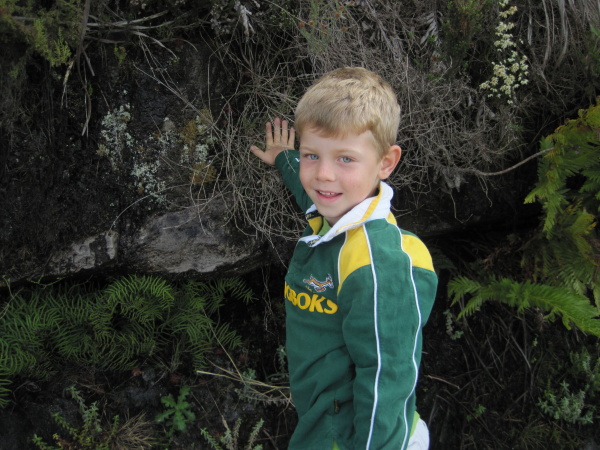 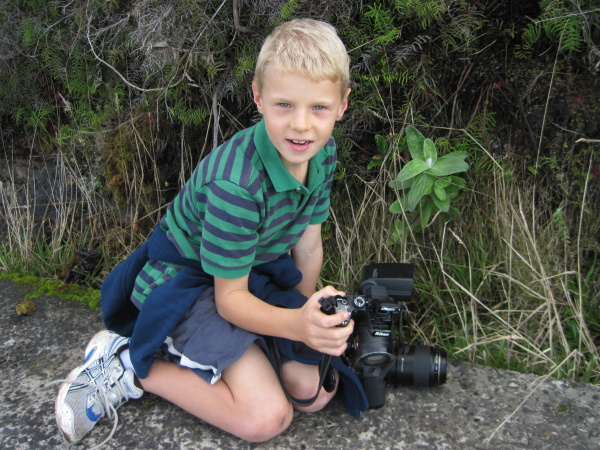 As much as photographing frogs seems a little strange to me, the sight that greeted hikers as they passed us by must have been completely bizarre.  Most of them hurried by but some people stopped to chat to find out what we were doing.  I was beaming with pride at my first moss frog but there were few passers-by that shared the emotion with me and the boys.  There were one or two people, however, that actually showed some interest and that was good enough for me.

It was a very satisfying walk down the mountain with all the pressure off my shoulders.  I had just found my very first targeted frog species and it was a good one.  Hopefully, the first of many.

For good measure we stopped to look at a number of birds on the way down, which included large flocks on Cape Siskin, but nothing would find its way onto my memory card that day that would beat the Cape Peninsula Moss Frog.

What a great gift for Father’s Day.

The rest of the day was spent with the family and involved absolutely no frogs much to Jeanie’s delight.

4 Responses to A Father’s Day frog