A break from the normal 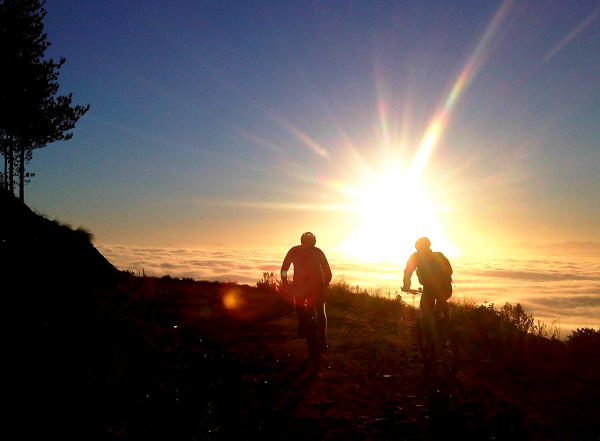 It has been quite a week for the Buckham family.

Jeanie arrived back from Canada in one piece last Sunday morning.  It was certainly good to have her home and meant that our household would be back to normal.  That was aside from the time taken to get over her jet lag but that would be a small hurdle to overcome.

Well, the normality lasted all of one day.

I was sitting at work on Monday morning when Jeanie called at about 11:30 to say she was taking little Jacky to the hospital for an x-ray.  He had fallen off the jungle gym at school and had hurt his leg and the teacher at school seemed to think it may be broken.

I could hear by the tone of her voice that she wasn’t buying much of that.  It does bear mentioning at this point that Jeanie comes from hardcore farming stock and sympathy isn’t an emotion that seemed to have been ingrained in her.  My occasional bouts of man flu get met with an extremely low dose of compassion and the kids are also learning fast that their sniffles, croup, coughs and knocks here and there are dealt with as matter-of-factly as possible.

“They must suck it up” she will say with not much of a pause.  That sentiment includes me specifically and I have learnt to phone my own mother when needing a little TLC.

So, here was Jeanie taking Jack to hospital for a little fall from a jungle gym.  She was jet-lagged as well and I could sense that she was hoping the doctor would tell Jack to get over himself and stop complaining.  This also meant that there was no reason for me to rush from my desk at work – I would just wait for word from Jeanie that all was okay.

At 1:30 I got a slightly different story.  The SMS read as follows:

I stopped what I was doing, jumped in the car and rushed to the emergency room at Claremont Hospital.  Whilst on the road I got a few more details.  The break was on his tibia (shin bone) and it was actually a double break.  Orthopaedic surgeons call it a “greenstick” fracture which is common in younger kids when their bones are still a little soft and sudden bending causes a break much like a young branch (or stick) breaks when bent.  I was also told that Jack had been a trooper and had hardly shed a tear.

When I arrived at the hospital I found poor little Jack lying on the bed with strapping around the lower part of his leg.  Jean was delighted as I had arrived just in time to assist the doctor with holding Jack whilst he applied the cast.  As much as Jean comes from hardcore farming stock she does not cope at all well with hospitals and she was actually looking a little paler than Jack.  This was my moment to step up as the dad and be strong.  I was ready for the role.

All I needed to do was hold him suspended over the edge of the bed with his broken leg dangling whilst the doctor applied the soft cotton coating to his leg before wrapping it all in the fibre glass cast.  It sounded pretty simple – Jack’s tiny little frame hardly weighs a thing.  The bit I had not been told was that the doctor was going to squeeze the wet cast whilst it was setting onto the injured part of the leg ensuring that the cast was well moulded to reduce excess movement.  This mechanism would reduce the amount of pain whilst the leg recovered but the process of getting there was going to turn Jack’s world upside down.

Jack had saved all the tears he hadn’t shed for that next 10 minutes.  The pressure on the injury was just too much for him and the yelling started soon after the process commenced and it went on unabated for the entire duration.  Ten minutes doesn’t sound like a long time but for Jeanie and me it was an eternity.  Jean put it very well in saying that it was one of those moments where, as a parent, you just want the pain to be yours and not your child’s.

I was also not prepared for this.  A combination of the unseasonably warm weather in the emergency room, the lack of food in my stomach but mostly the screaming coming from my poor little boy caused me to start feeling dizzy.  The nausea welled up and I started seeing spots and just before I was about to pass out I had to ask the nurse to take my place holding Jack.

So, there was tough dad lying on the hospital bed about to pass out, Jeanie feeling equally queasy with both of us completely unable to comfort our child who was going through a harrowing ordeal.

Fortunately the cast was soon set and the pain eased off immediately.  It was an enormous relief for Jack and I might add I believe it was a far greater relief for Jeanie and I.

We were soon on our way home with the doctor assuring us that the pain for Jack would only decrease from now on and he should have a peaceful night.  That was unfortunately substantially inaccurate.  We found ourselves back in the emergency room later that night with Jack exercising plenty of vocal energy.  The cast had been set too tight and the swelling around the injury had nowhere to go with the result that it pushed against the fracture.

So, it was back to the x-ray room and once it was confirmed that the injury had not worsened we had to endure 45 minutes of noisy sawing as the cast was split to relieve the pressure.  I am sure Jack was convinced that the saw would cut into his skin as his terrified face had gone even paler than it usually is.  Once the cast had opened up a little the pressure came off completely and we had our child back again.  Whilst the sawing was taking place Jeanie found a great distraction for Jack in chewing gum.  It was his first encounter with the stuff and he found the whole concept fascinating.  There the two of them were blowing bubbles at each other whilst I watched the sharp end of the saw making sure that there were no additional injuries to worry about.  Little did I know that my worrying was wasted as the saws are designed not to cut into skin.

That first night was certainly the worst but subsequent to that the issues are far more logistical than anything else.  Jack now has to be carried everywhere we go and going to the toilet and bathing have become quite a bit of admin.  Having three other kids that need attention as well has created quite a bit of emotion in the household and we have spent a fair amount of time making sure each member has had good face time with mom and dad.  We will have a few months of this and then hopefully things will really return to normal.

I suppose it is ironic that Jack has not had much of a mention in my birding blogs to date since he is still a little young to be joining us on our outings but one didn’t think that he would need to go to such extreme lengths to get some attention. 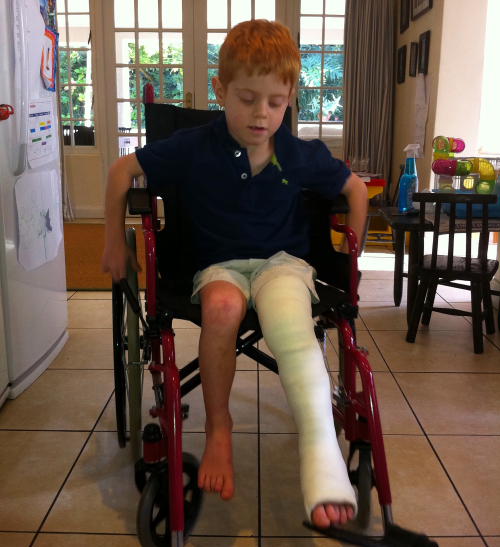 Jack in his wheelchair

The week turned out to be a pretty stressful one at work as well but nothing cures my stress levels better than my scheduled Saturday morning rides.  It was a shorter one than normal as I embark on my third Sani2C mountain bike race in the week to come.  With the hard training behind me it was a slightly shorter one just to keep the legs ticking over.  Even though it was short we rode up to the top of Noordhoek Peak which is without doubt the most beautiful ride on the Peninsula.  Saturday morning was even better than most with the mist rolling in from the west flooding the low lying areas with the upper parts of the slopes and the peaks of the mountain bathed in early winter sunshine.  It certainly made for some spectacular views which we were able to capture on our cellphones. 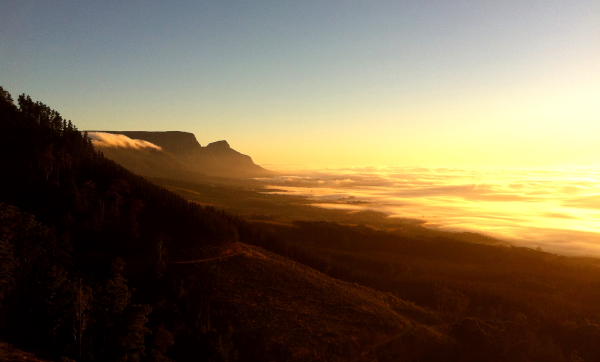 The only birding that we did on the weekend was a short walk around Kirstenbosch before a Mother’s Day breakfast at the new Moyo restaurant in the gardens. 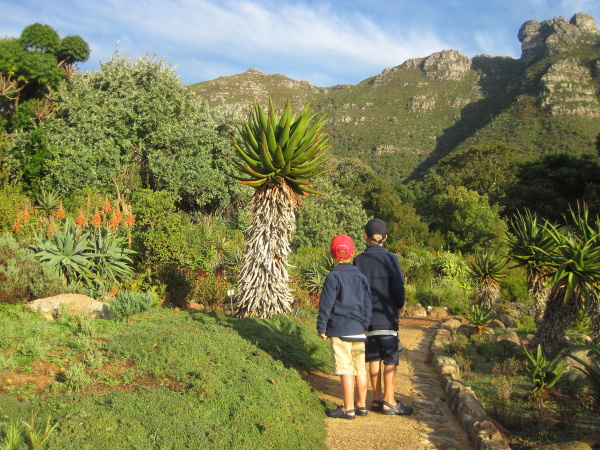 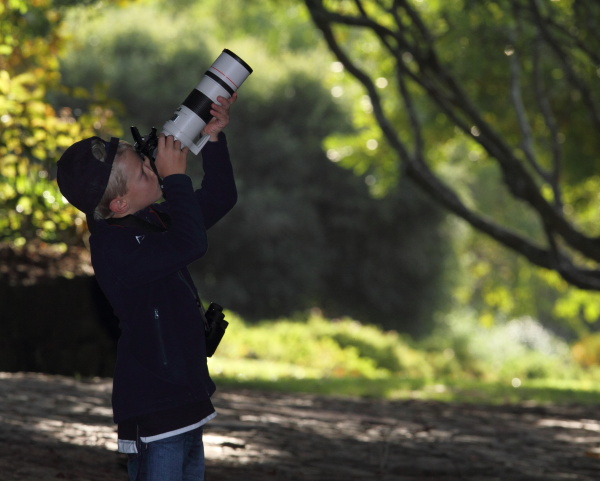 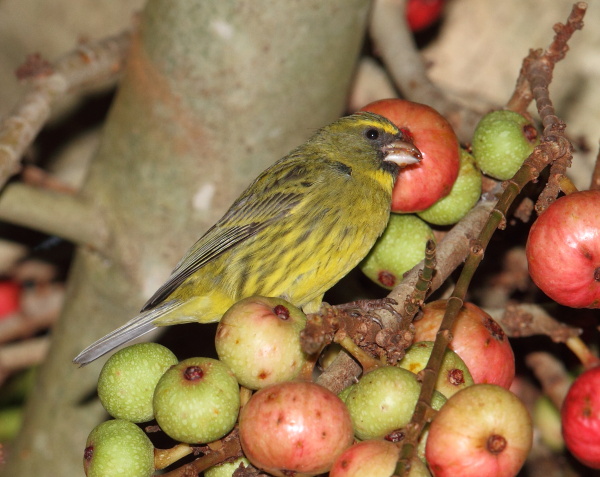 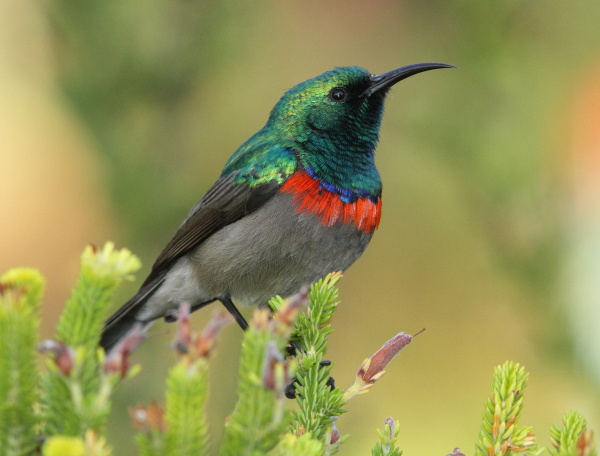 Jeanie and I are both very proud of our youngest son who has adapted to his broken leg very well.  We thought he may battle being so skinny for his age, but he is sliding around the house on his bum and giving his parents as tough a time as he usually does.