A Barbet bonus in Plett 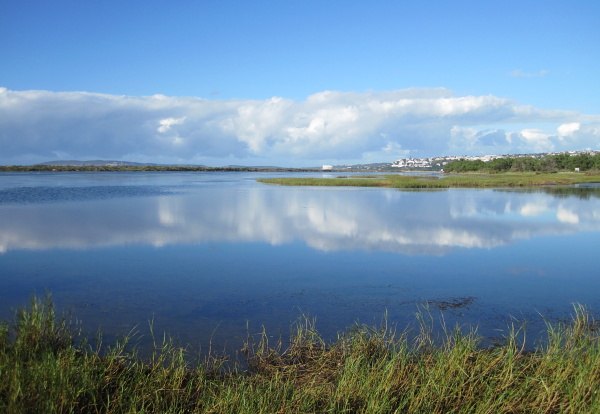 After a week of school holidays with the kids at home while Jean and I were at work it was time to pack the car again and head east.  We were heading for Plettenberg Bay where Jean’s mom has a house on the edge of the Robberg Nature Reserve and it really is important to remind our kids how lucky they are to have access to so many amazing places as youngsters.

Jean and the kids would be spending 10 days in Plett but I would be commuting back to Cape Town for the short week.  It is something I do a lot while the family is on holiday so I have definitely become used to it.  It would also give me a chance to rattle around in the house for some peace and quiet but in all reality it is fun for a couple hours but shortly thereafter I am pining for a bit of chaos.

We left Cape Town at lunchtime on Friday and the weather could only be described as positively foul.  The roads were busy (being school holidays) and the rain came down in buckets.  I was pretty convinced my weekend would be spent indoors with 4 very frustrated children.

I also had other concerns.

Since we twitched the Sooty Falcon three weeks previously I had been secretly hoping it would stay until this weekend.  My photos were very disappointing and being based in Plett for the weekend I would definitely get a chance for improved pics.

All the signs were good.

Early on Friday morning I received confirmation that it was still performing for the crowds. However, I was pretty convinced that the arrival of the Western Cape’s first major winter storm would send the falcon packing.  Why hang around in the rain and cold of Plett when the warmth of North Africa was calling?

Needless to say, the Buckham birding clan was at Emily Moon as soon as the sun was up.  It is bizarre to say that the sun was up as rain had come down throughout the night and not in my wildest overnight dreams did I anticipate seeing the sun on Saturday morning.  But, there it was and that was a very good omen.

As we arrived at Emily Moon we were greeted by the full complement of “the Lakes Birding Club” out on their monthly Saturday morning outing with all their binoculars trained on the top of a pine tree. And what else would they be looking at other than the Sooty Falcon?

What a huge relief.

Even better was the fact that it was so much more obliging than the last time we had been to see it and we spent the next 90 minutes taking pics as it preened and readied itself for its day’s hunting.  It left no stone unturned as it scratched where it could scratch and stretched what it could stretch. 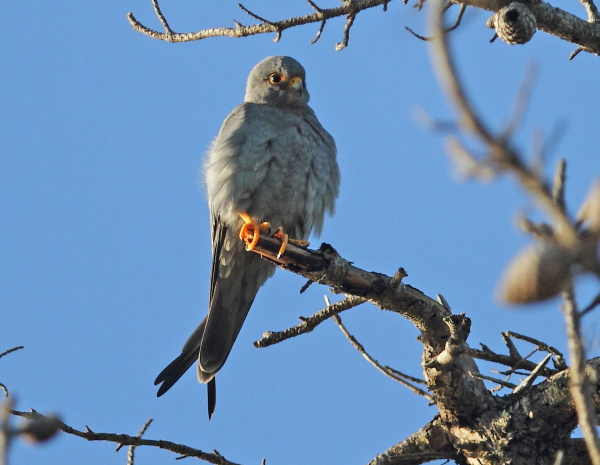 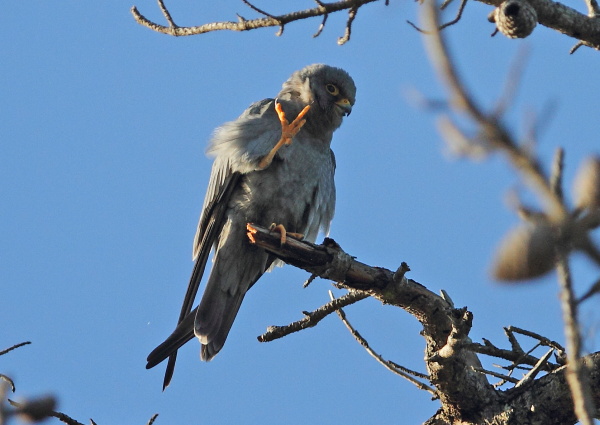 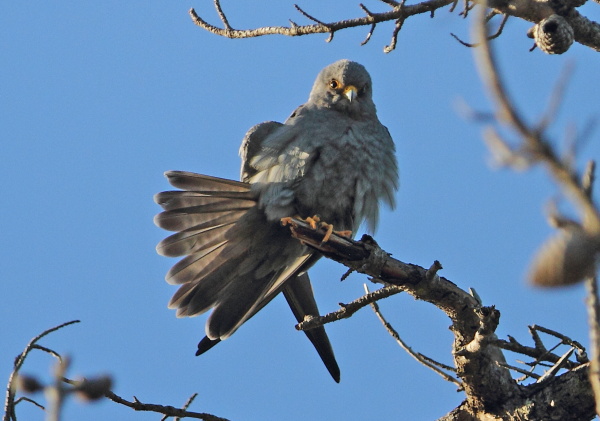 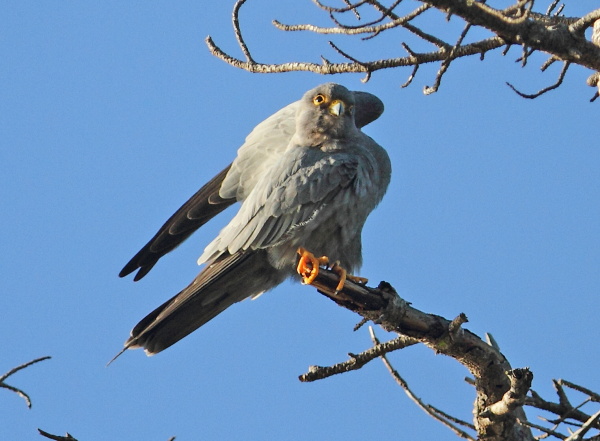 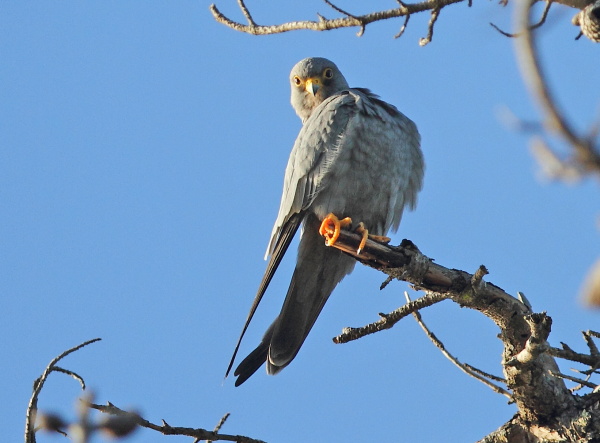 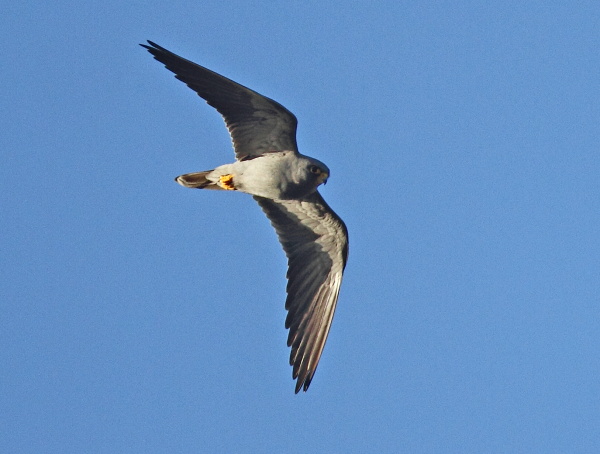 Once done with its beautifying it flew from one pine to the next and eventually settled again in the depths of one of the leafier pine trees.  It did not appear to be doing any more obliging flights so we called it a day and spent the next few hours trailing in the wake of the bird club as they criss-crossed the pentad adding the full range of species.  We paid a visit to the Keurboom estuary as well as the sewerage works which were both very productive on such a beautiful morning. 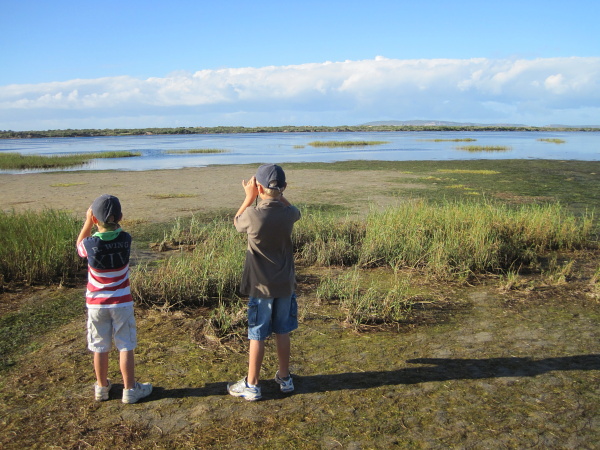 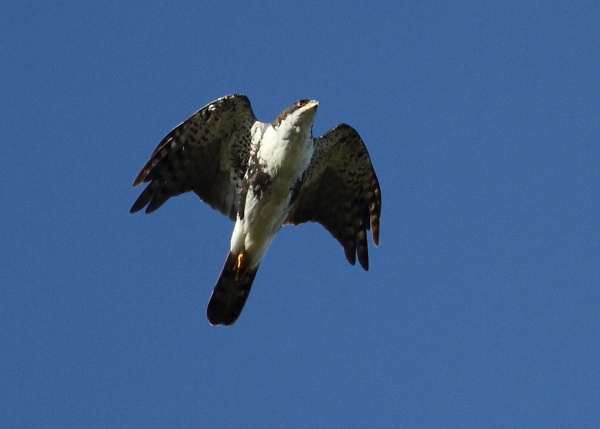 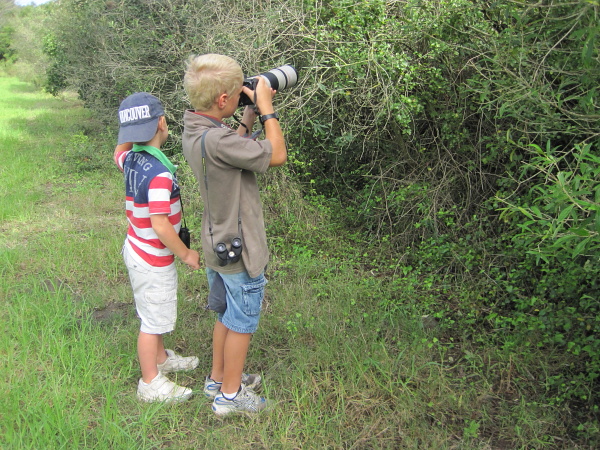 The most rewarding bird (other than the falcon) was an obliging pair of Lazy Cisticolas that seem to be resident at the entrance to the sewerage works.  I had recorded them there before so it was nice to have a rediscovery of a good Western Cape bird. A bit of caution was necessary as a Neddicky foraged in the same small bush as the Lazy Cisticolas.  I ended up with about 20 photos of the Neddicky before I realized I was photographing the wrong bird!!!

Such is the total focus and dedication of a photographer… 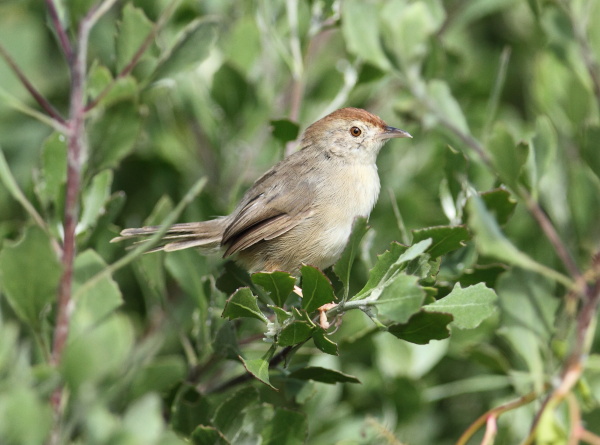 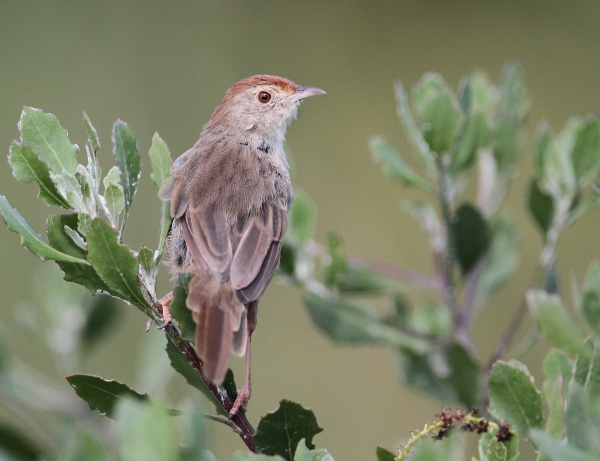 Of late my Western Cape list has been on a bit of a roll.  Since passing 400 it has ticked along quite nicely, particularly with birds such as the Sooty Falcon and the amazing Little Crake just the previous week.  I wasn’t expecting any additions any time soon, particularly in Plett where I have spent many hours birding the various different habitats.

Well, I was wrong.

Soon after sms’ing Trevor Hardaker to let him know the falcon was still around I got a message back asking if I had seen his mail about the Black-collared Barbet in Plett.

This was a very pleasant surprise. This is a very rare bird for the province with the only record that I am aware of being the bird that hung around for a short while in Oudtshoorn about 5 years ago.  I had actually managed to persuade my family on a drive through Oudtshoorn that year to try to see it but my leeway was very limited and it never appeared during the 15 minutes I was allowed during the stopover.  Yes, it is hard to understand why my wife is so unreasonable.

But now this bird in Plett was the second record for the garden route in a space of 2 days (bizarrely a pair of Black-collared Barbets were seen in Wilderness on Thursday).

Any thoughts that I had of trying to wangle a trip to Wilderness were out the window and my focus was firmly placed on the Plett bird.  I used all the technology at my fingertips with several e-mails to the reporters of the bird before I got an impressively quick phone call from local birder Mike Bridgeford who was just on his way back from adding this one to his local list.   To make matters even easier the bird was no more than a 5 minute drive from my mother-in-law’s house on a protea farm near the airport.

Within minutes I was out the door again with my two reliable companions, a bottle of strawberry jam in hand and any chance of my afternoon sleep left in tatters.

We were soon comfortably entrenched in front of a plethora of bird feeders on the stoep of the most hospitable people you could wish for and now all we required was a bit of patience.  We spent almost 2 hours delighting in the activity on the feeder giving me an opportunity to take plenty of photos of some of the area’s most common birds.  There were certainly worse places to spend time waiting for the arrival of our quarry. 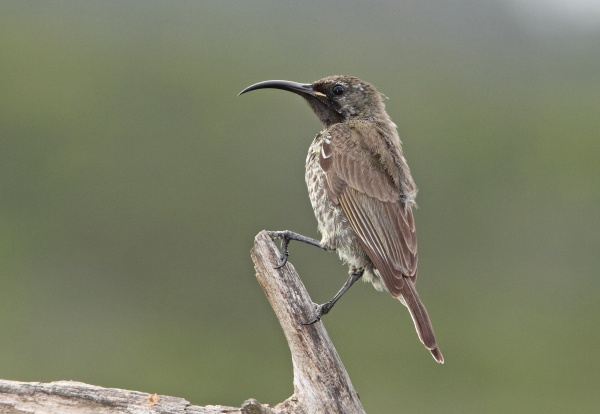 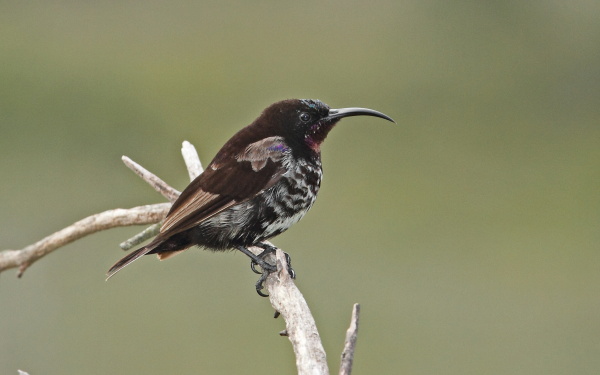 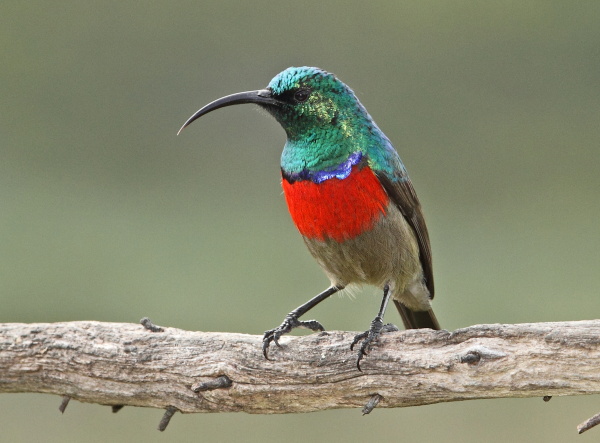 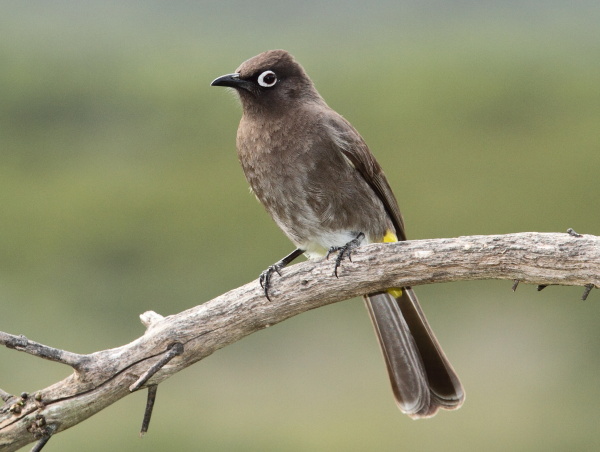 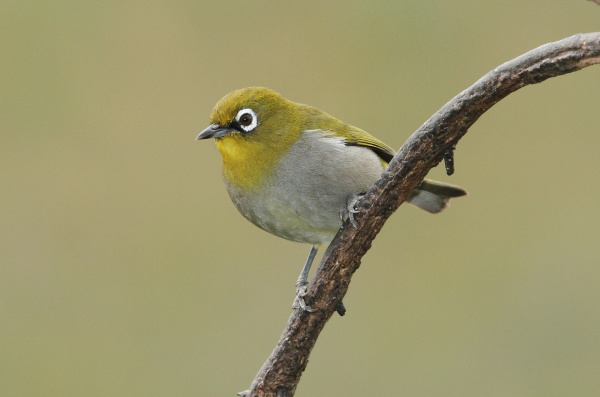 And to top it all off the rather lonely looking Black-collared Barbet eventually arrived to stock up on some well-deserved fruit after a long journey from wherever it had come from.  It was very noticeable that the bird was not at all vocal (which is unusual for this species) and it was also extremely skittish.

We only had brief bites at the cherry for a decent pic and it definitely appeared to be outmuscled by some of the other birds gorging on the fruit that had been left out. Perhaps we were unlucky that it did not linger but it certainly gave us more than enough of a show and yet another bird was added to my Western Cape list. 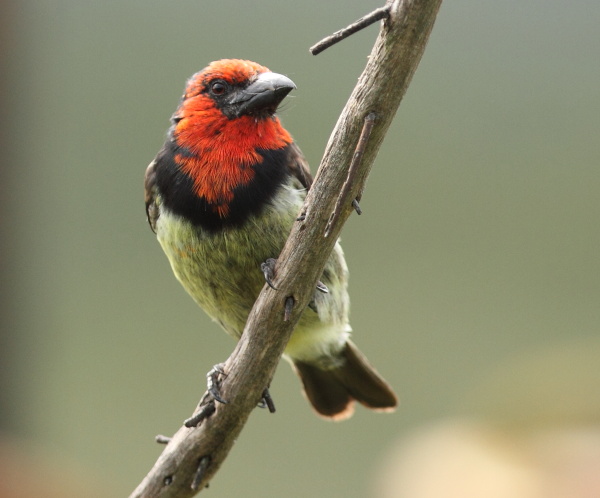 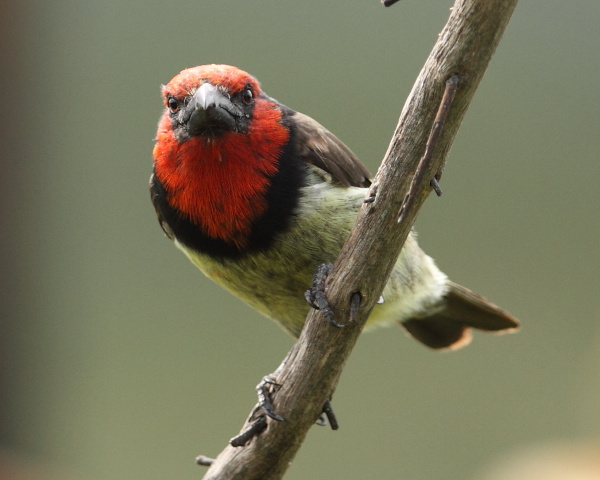 I had been given full license to indulge in as much birding as I wanted to for the weekend as Jeanie spent some quality time with her mom, but after the glut on Saturday I decided a bit of a ride and some time with the family on the beach was just what the doctor ordered for Sunday. It also would have been unreasonable to expect much more after Saturday’s feast.

So, back to work on Monday morning but it will be a short week and who knows, the falcon may still be there next weekend for yet another opportunity for some better photos of this magnificent bird… 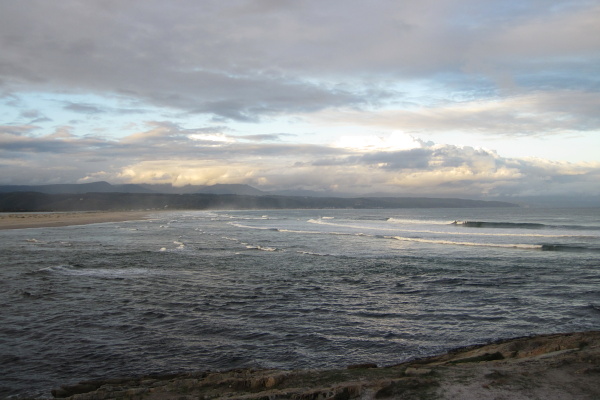 One Response to A Barbet bonus in Plett