Strandfontein – a needle in a haystack

After a long weekend spent in the Kruger Park it has taken me a while to generate some enthusiasm for a bit of local birding.  Having left the abundance and unfamiliarity of the sub-tropics it was always going to be tough getting back to my home patches which are all too familiar.

What was making it even more difficult was my dearth of birding companions.  My ever-faithful oldest son, Tommy, having just achieved his recent milestone was always going to be first on the list.  But, as surprising as it may seem to some of his greatest admirers (his grandmothers) he is not always the golden child.  A moment of weakness during the school week meant that a punishment had to be meted out and Jean and I have quickly realised that the most effective punishment for Tommy is to confiscate his binoculars and camera and leave him at home for one or two birding trips.  So, Tommy was not on the list.

Neither was Adam as he was at his best friend’s house for a sleepover and with most of my regular birding mates taking advantage of the beautiful late summer weather to get out on a bicycle I was man alone.

I could have used the quiet Sunday morning to have a little lie in but it is very hard for me to do that on such a stunning day.  It was also hard to ignore the recent report from Brian van der Walt of the 3 Sand Martins at Strandfontein.  I had seen this bird once before in the Western Cape but I had never photographed it.  I felt that I had a good chance to sift through hundreds of hirundines if I was on my own.  I had also been very unsuccessful on a previous occasion looking for this bird at Strandfontein so I felt it would be an opportunity to turn that around.

The report from Brian had indicated that the Sand Martins were seen amongst the Barn Swallows and Brown-throated Martins near the entrance to the works.  I am not sure how many of you have been to Strandfontein in late summer when the warm weather has the insects out in force and the Barn Swallows are out feeding to fatten up for the long flight north.  There are literally thousands of them all over the place.  Mixed in amongst them are plenty of Brown-throated Martins and since the only distinguishing feature between these and the Sand Martin is a white throat it was going to be the proverbial needle in a haystack affair.

I am always pretty spirited about these things when getting into the car for a quest of this nature but it was hard to maintain those spirits when arriving at the works and seeing just how many swallows and martins were flying around and feeding.  It was astonishing.  I reduced my chances immediately to negligible and spent most of my time enjoying doing a bit of atlassing with some nice species for the pentad.  The most unusual birds were probably the pair of Fork-tailed Drongos in the gums just off Strandfontein Road and the single White-backed Duck sitting inconspicuously amongst the huge variety of waterfowl.  A Black Crake was also a nice addition.

I was just finished scratching my head about this very young Red-capped Lark (Note: I say this with a huge disclaimer as I may be wrong on the ID of this bird but the shape of the bill, the reddish cap and the emergence of the breast markings led me to Red-capped Lark) when I found another large group of swallows and martins which I thought were worth another sift (having spent at least an hour sifting through several other groups). 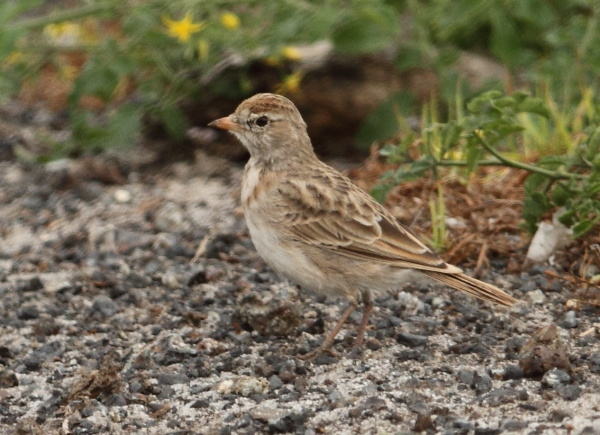 After 30 seconds one of the birds flying towards me had the distinctive white throat of Sand Martin.  Finally…

Having located the bird I then spent the next hour trying to get a photograph.  I took plenty of habitat shots (photos of lots of bushes but no bird) but I finally managed to nail one or two recognisable photos.  As is the case with all bird photography the loss of light takes place at the exact moment that the target bird makes its most obvious appearance.  So, these photos are pretty poor but good enough for an ID and certainly good enough to add to me list of photographed species. 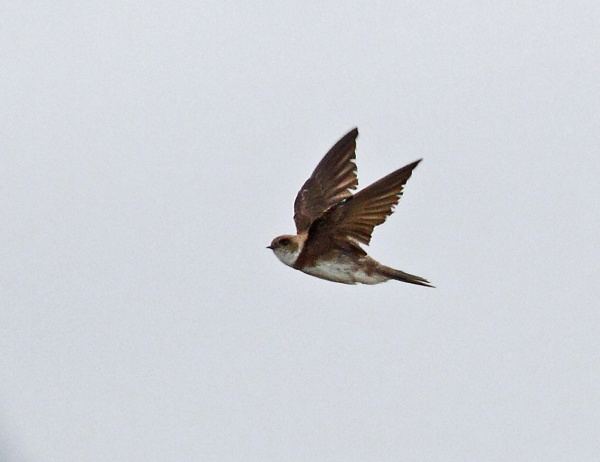 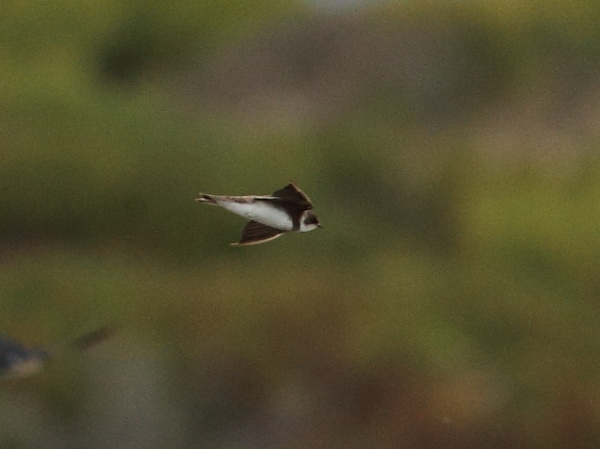 Aside from the Martin the works produced quite a few nice raptor sightings, the highlight being an extremely obliging Black-shouldered Kite.  This is a bird that is surprisingly tough to get a decent pic of (in my experience) but here was one that was in no mood to go anywhere.  It was also not simply a bird perched on a tree.  It also provided some entertainment as it suddenly started to shake its head from side to side and began dry retching.  After a few seconds of this the most enormous regurgitated item came out of its mouth and fell to the ground.  I am not at all sure what this item was but it was very interesting to see, albeit a little gross. 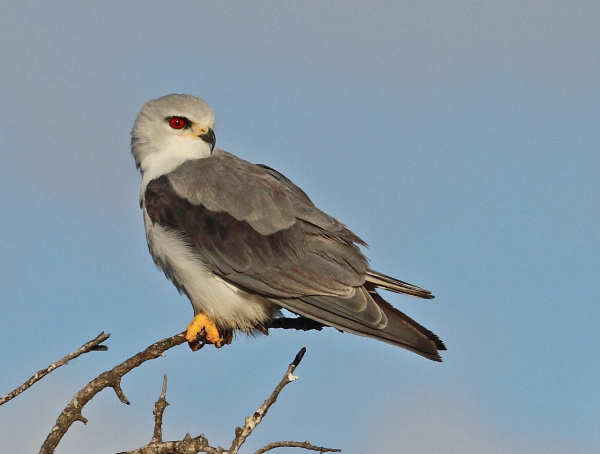 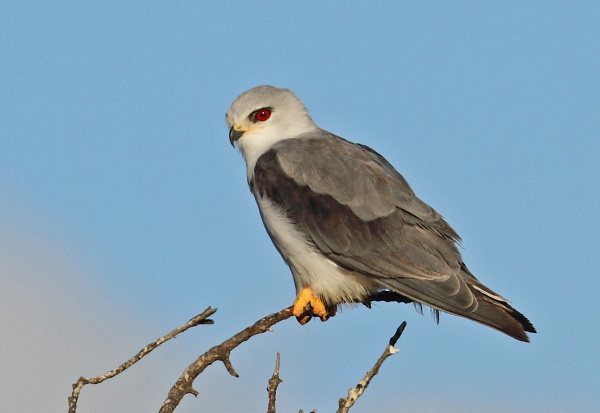 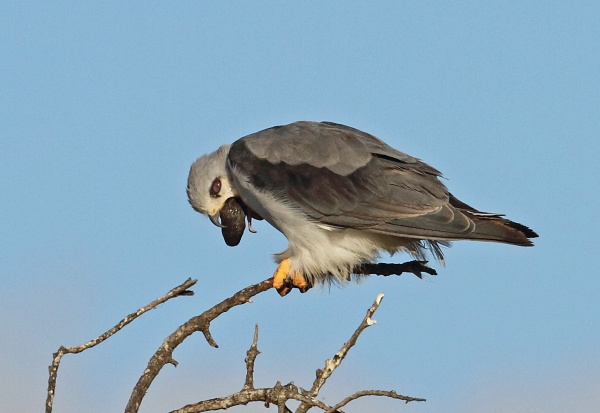 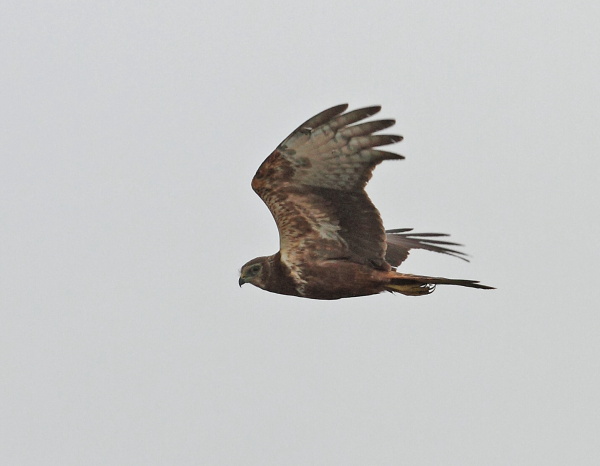 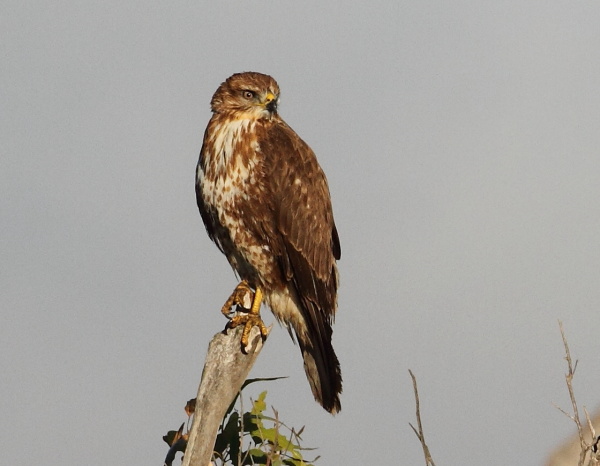 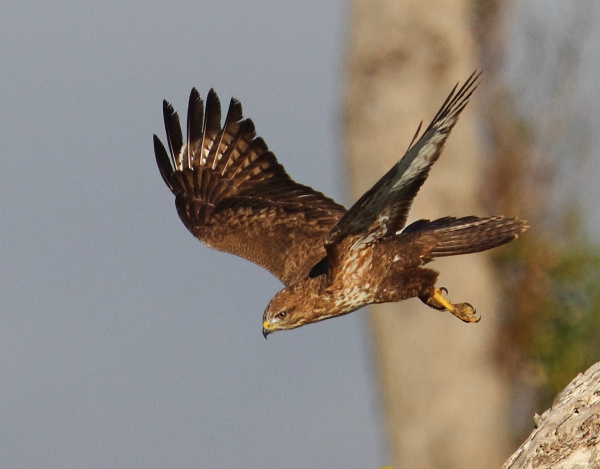 So, all in all a good way for me to get back into some local birding.  I have a new bird on my photographic list, but unfortunately Tommy will have to wait till next time.  At least a lesson learnt.

2 Responses to Strandfontein – a needle in a haystack