This blog starts with yet another apology to those of you that click on the links to read about my birding exploits.  Some of you will start to feel a little short-changed if you keep finding me writing about my cycling events.  I promise that this is going to be the last one for quite some time.  From now on out for the rest of the year I promise to return to the central theme of my website.

Now that my apology is behind me, let me tell you about my Double Century cycle race.  The Double Century is a rather extreme (in my mind) road race that involves being part of a team of 12 riders to work their way through just over 200kms of ups and downs of the Southern Cape.

The route begins in the oak lined streets of Swellendam, links  with the N2 in an easterly routing for a few short kilometers before a left turn to the one-road town of Suurbrak, a northerly swing to the left to take us through the spectacular Tradouw Pass before reaching the R62 at Barrydale.  The next 75 kms follow the R62 in a westerly direction through the towns of Montagu and Ashton before turning south in Robertson, through Bonnievale and ultimately back to Swellendam over the short and sharp hills along the foothills of the mountains. It is most unusual for me to participate in a road racing event.  Although the general category of cycling encompasses road riding and mountain biking they are pretty diverse pursuits.  Road riding is an authentically risky activity with the possibility of collision with any of the other forms of road users being quite likely.  Taxis are a primary risk and it is for this reason that I mostly avoid spending any time on the road.   Mountain biking has its risks as well but they are generally under the control of the cyclist and one is not at the mercy of random events that are caused by external factors.

Therefore, one has to ask why I signed up for 200kms on the road.

Well, a good friend of mine, Nic, celebrated his 40th birthday earlier this year and as one of his “bucket list” items he was given an entry into DC as a gift.  It does sound like a strange one but given Nic’s pursuit of all things that include endurance it was not that far off the mark as being the perfect gift.  The only downside is that it meant he needed to drag 11 of his mates into it with him. 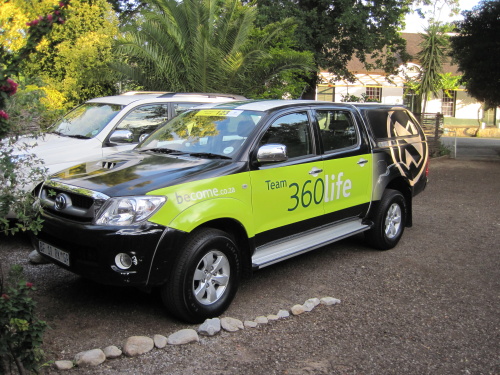 I was going to be one of those mates.

Although Nic knew that I was relatively loathe to subject myself to road riding, a challenge of that nature was not something I was easily going to turn down.

Many years ago, before Jean and I embarked on parenthood we were fanatical “roadies”. Every weekend involved doing any race that was on the calendar no matter how far flung it was.  We crossed the countryside many times over on our bicycles until one unfortunate day when I lost control of my bike during a training ride and ended up in a crumpled heap half way down Constantia Nek.

As much as I referred to the external influences that one would consider dangerous, this particular crash was self-inflicted.  It had a sudden and marked effect on my mental state and it was the last time I got on a road bike until a few months back when Nic extended the invitation to join the team.

So, I was now committed to the Double Century and would be riding with a great mix of Nic’s mates and the group was semi-appropriately named “The Roaring 40’s”.  The only reason I say “semi-appropriately” is due to the fact that I am not yet 40.  Maybe the receding nature of my hairline makes people think that I am older than I really am.

The training rides were tough for me to commit to given my mountain biking regime for Wines to Whales (see blog here) so it was most likely with a fair degree of trepidation that the remainder of the team felt I deserved my place.  I was, however, not the only member of the team with strictly mountain-biking pedigree – my Wines to Whales partner, Bruce, was also roped in and he would be riding his first road race ever during the DC.  What better an introduction could one ask for?

As a mountain biker first and foremost I can be a little disparaging about road riding.  It seems to be quite important that one looks the part when road riding and the length and colour of one’s socks is far more critical than you would ordinarily believe. Heaven help you if your bicycle frame does not match your socks as well as your cycling shirt, shorts and your helmet.

The road riders, equally, are not that tolerant of mountain bikers and so my 15 year old blue Canondale bicycle was the source of much abuse during the day’s activities.

I don’t intend to go on too much about the route as it has already been described and with road riding there is not much variability in the surface but it was, quite surprisingly, a fantastic day out.

We had agreed (under some serious duress from the birthday boy) that we would stick together as a team for the entire duration of the ride and barring any serious struggle from any of the team members we would finish as a single unit.  This is in contrast to the rules of the race where the finishing time of any 12 member team is taken once the 6th rider crosses the line.

This leads to some of the more serious teams shedding slower/weaker riders as they tire.  This high degree of attrition means these “rejects” have to get home on their own steam whilst the rest of the team disappears over the horizon.

For Nic, this was a non-negotiable – we would be riding socially and so we would be crossing the line together.  There would be no “rejects” in our team.

We were granted as perfect a day for cycling as we could have wished for and, combined with the beautiful Western Cape landscape we criss-crossed, it made for a great event. 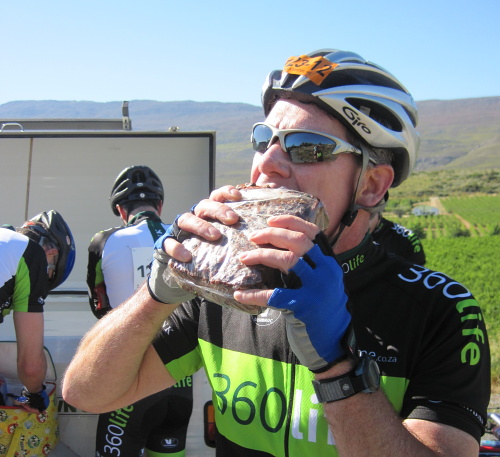 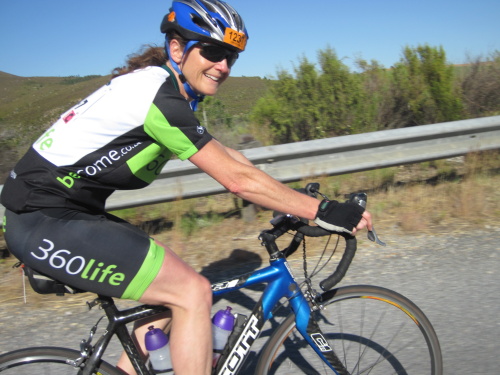 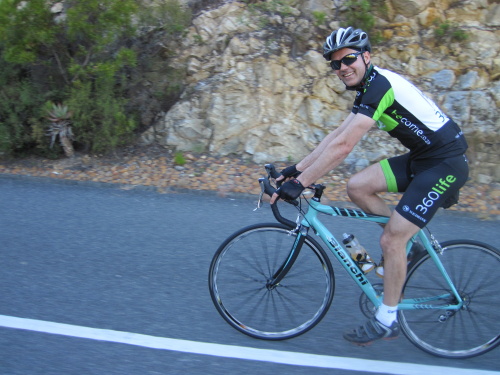 I am still not convinced that 2,500 cyclists out on our national roads together with 220 team cars is not a recipe for some kind of accident.  Particularly given the fact that the roads are not closed to traffic (it is hard to close 200kms of national road on a Saturday morning) but we all made it to the end safely and achieved our objective of crossing the line together.

It was truly a privilege to share the day with 10 other like-minded people, as well as the two fantastic supporters who were always there to give us exactly what we needed at exactly the right time.  If you think it is a tough day riding that route it must have been hellish trying to keep up with the team and avoid all the cyclists and team cars on the road, yet still produce our drinks and food in a completely organised and measured fashion.  The calf massage 15kms from the end was also greatly appreciated.

It is hard to hear myself say this but, if invited next year, I may have to do it all over again… 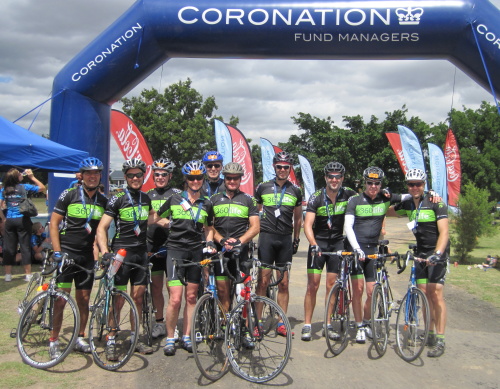