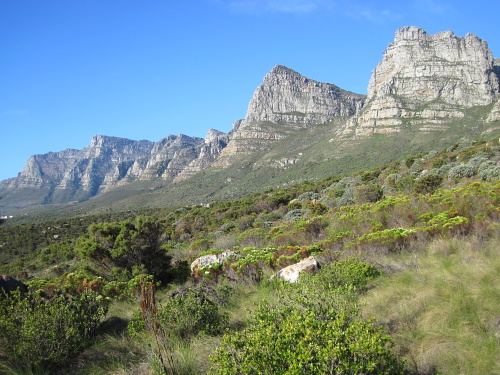 It almost feels like I have been a little traitorous of late. It has been at least 4 weeks since I last posted a blog and I’d like to believe that many of my loyal followers may have missed my ramblings It seems, however, as if the break may have been a good thing for all of us as I certainly haven’t been inundated with appeals for what has happened to me…

The truth be told it has been a busy time for the family but it has sadly included very little birding.  In fact, even this blog is a little light on the birding but I did manage to get out once or twice (very locally) to take a few pictures (with minimal succes, I might add).

The focus of the weekend, however, was for Jean and I to spend some quality time together before our lives get turned upside down yet again with the arrival of our 4th child.  Jean found an advertised special at the Twelve Apostles hotel alongside the Atlantic Coast a stone’s throw from Camps Bay, called in babysitting resources from goggo Annetjie and Aunt Mary-ann and we treated ourselves to some quality time with each other.

The arrival date seems to have crept up on us at a rapid rate.  Being the fourth time around I have been exempted from all gynae visits which is a far cry from the previous pregnancies (particularly the first) where my presence was required to ooh and aah over the scans.  Jean fortunately realized that there was not much difference between a hazy ultrasound scan from one child to the next and I was equally happy to let the ladies do what they do without any unnecessary interruption from me.  In fact, I believe Jean considers her gynae visits more of a social event given the fact that she has spent so much time with her doctor over the last 9 years.  I am told that the checkups are pretty quick just to make sure that heart beats are regular, movements are frequent and blood pressure is low and then the rest of the allocated time slot is spent gossiping and drinking tea.  Jean’s gynae has become a personal friend it seems and who can argue with that given the time invested together…

The lead up to arrival day has been quite different from before.  In the past there was far more focus on whether we had all the bits and pieces in place but this time around it almost seems like we may be winging it a little.  It has to be said that the usual new parent preparation is completely over the top.  It always amuses me that several cupboards are suddenly filled with nappies, wipes, baby grows, dummies, bum cream, gripe water and cotton wool.  You would think we all live hundreds of kilometers away from a city.  I’m prepared to bet that Pick ‘n Pay isn’t likely to have run out of essential baby products in the unlikely event that we may run out of something that is semi-important.

One of the things that seems to have people a little confused is the fact that we have kept the gender of the child a mystery.  It is unusual in today’s technologically advanced world that many new babies are unsexed before they come out.  I suppose it makes sense to be able to prepare the baby room (gee, how did our parents survive not being able to hang the blue or the pink curtains before birth date?) but for us it has always been a magical moment when the baby pops out in the delivery room and everyone’s eyes head straight for the genitals to see what it is.    I have been known to shed a little tear during the occasional tear jerker (those Volkswagen adverts sometimes get me going as well) but there is nothing that makes me blubber more than seeing those big swollen testicles when each of my boys have been born.  I’m pretty sure I would have been just as excited if one or more of them had been a girl – the point being made is that the added mystery seems to make the experience that much more emotional.

We never found out with Tommy and Adam but then for personal reasons we had a  little peek with Jack (given his rather generous endowment a little peek was really all that was needed – to expand on that theme his paediatrician made mention of the fact that at his 2 year check up his “willy” made up more than half his body weight).  This time around we both decided that it would be a really nice surprise given that so much else about childbirth in the modern era is defined well ahead of time.  As an exampe, we have had the Caesarian date booked since early on in the pregnancy and the 7th of September has had a big red circle around it on the family planner so we felt it would be best to leave something completely unknown.

So, the jaunt to the Twelve Apostles was the last hurrah and we tried to make the most of our time away.  During the early days of parenthood it was quite hard leaving the kids with the rest of the family. Thoughts of how they would cope without us always seemed to plague the mind but as they have grown a little older we seemed to have adapted quite well to taking a little time out.  We knew they were in very good hands and it has been a tradition of ours to spend the last weekend as just the two of us.

We checked in on Saturday afternoon and whilst Jeanie spent a relaxing 2 hours at the spa I scoured the fynbos behind the mountain.  I had very little to show for my efforts with virtually nothing to photograph whilst out on a beautiful afternoon.  The following morning, after breakfast, I left Jeanie whilst she grabbed a little extra sleep and joined good friend, Simon, at the Glen in Camps Bay where he has been monitoring two birds’ nests at opposite ends of the food chain.  There is a Black Sparrowhawk nesting in one of the stone pines whilst a delicate, beautifully formed Orange-breasted Sunbird nest lies suspended in the middle of a tree amongst the pine needles at the base of the pines.  It seems a little odd to find the nest well away from the sunbird’s natural habitat but the slightly gloomier forest obviously gives a little more protection from predators.

It seems I am not even able to avoid a bit of birding time even whilst on a romantic getaway for two! 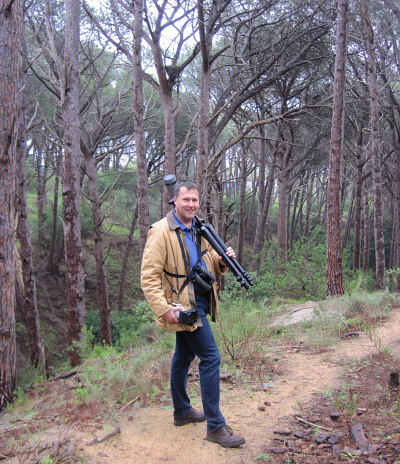 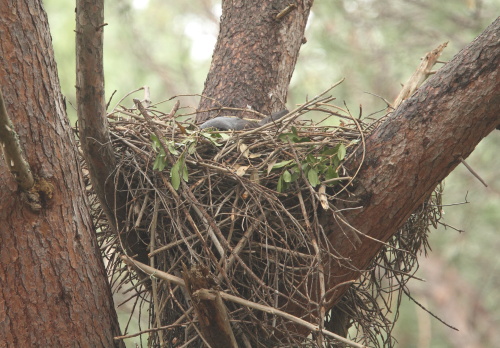 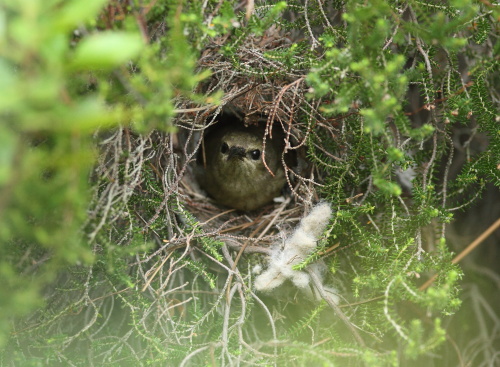 We returned home after a very relaxing time and were delighted to see the kids.  It seemed as if they had missed us judging by the reception we received when getting home.  I had one last plan for the weekend which was to take Tommy and Adam to Noordhoek Peak to try and find the small group of Ground Woodpeckers that I had seen whilst riding in Silvermine on Saturday.  It is not a bird I see very often on my Saturday morning rides and there was a huge element of risk in taking them all the way up there as it involves a pretty stiff climb to the peak given that the chances of finding the birds was pretty slim.

There were a few other incentives as well – we had also had good views of one of the adult Verreaux’s Eagles that makes up half of the only remaining pair on the Peninsula.  It is always worth taking a chance when there is a Verreaux’s Eagle as a potential.  Sadly we did not see either bird but it was hardly noticed by the boys as it was a great experience for them to claim their very first significant hike on the mountain chain that traverses the Cape Peninsula.  They both acquitted themselves extremely well (together with good friend, Nick) and I am certain it was the first of many.  There were a few moans and groans as the path seemed to go on forever but overall it was a very good effort. 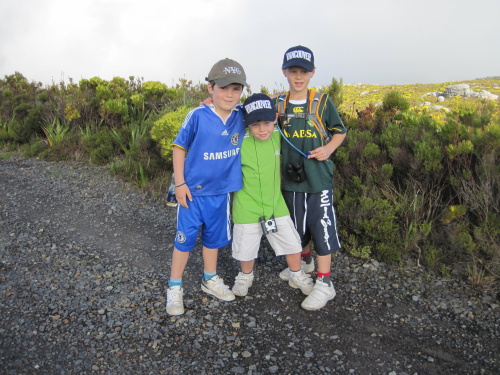 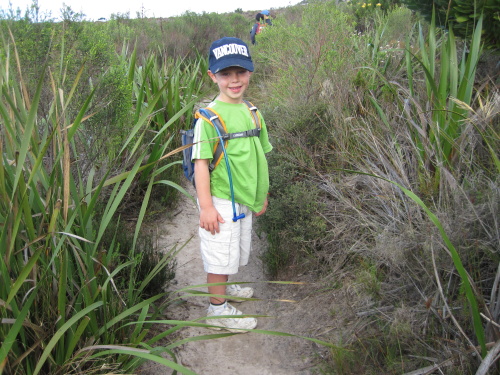 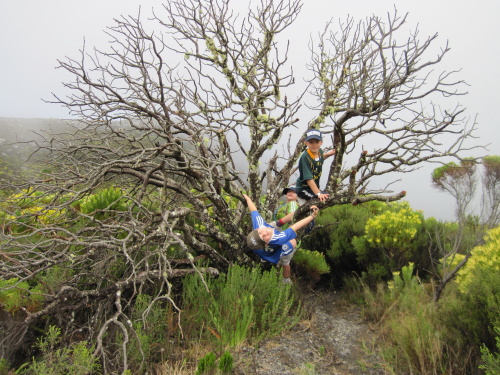 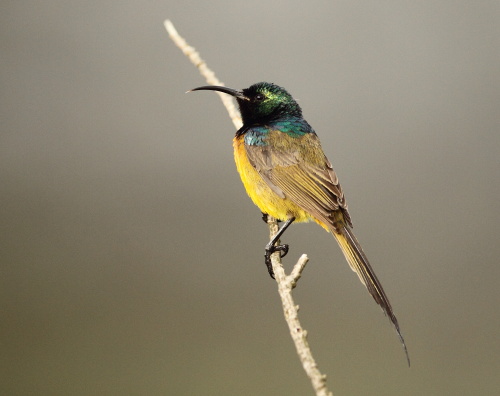 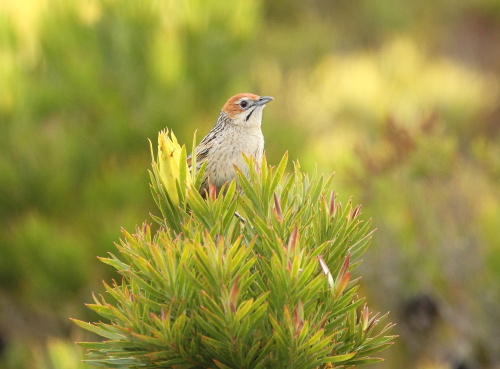 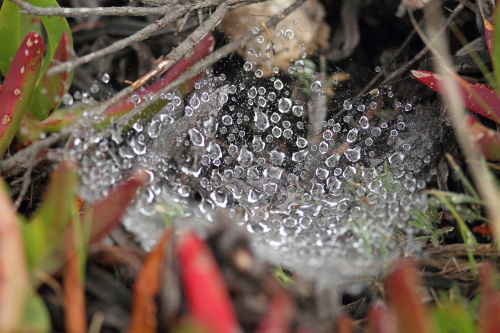 Despite missing out on the Woodpeckers and the Eagle we were compensated by two notable birding events.  The first was the appearance of 4 thermaling White Storks out of the mist.  A very strange bird for this part of the world and certainly my first record up at Silvermine.  They slowly drifted out of the mist from the south and made their way in a northerly direction.  I suspect they may well be searching for their true destination after getting a little lost on their way south from Europe.

The second noteworthy event was hearing at least three Striped Flufftails rattling from the depths of the fynbos.  I had stopped to take off my sweater and whilst doing so I heard the first of them call very loudly from less than 10 metres away.  After a few patient minutes there were at least 2 other birds calling within a 50m radius.  This is a bird that I have known occurs in the area but I have never seen or heard one here.  It is great to know that they are around.  I resisted the temptation to dive into the fynbos to flush them knowing that it would be a futile exercise.  Tommy, on the other hand was itching to get at them and it took me a while to convince him not to. 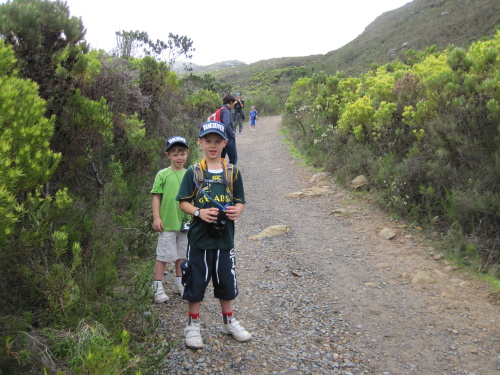 So, not many (in fact, hardly any) photos to share from the weekend but hopefully, if all goes well, I’ll have photos to share of a totally different kind come the end of Wednesday. 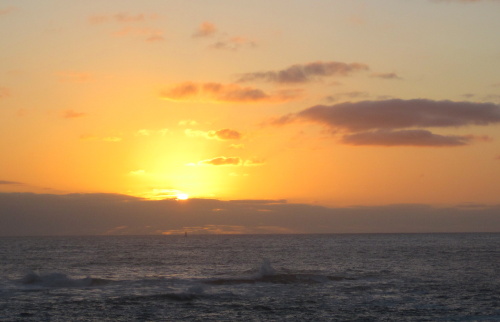 2 Responses to The Imminent Arrival