I have decided that camping may not necessarily be a pastime that the Buckham family should do too often.  I had always thought as the boys were growing up that it may just be a bit too much admin for Jean and I to drag three young boys off and put ourselves through all the hard work of pitching a tent, shuffling cooler boxes to make sure food doesn’t go rotten or drinks don’t go warm, blowing up 5 mattresses and spending the sweltering middle hours of the day chasing shade.

Well, perhaps I was right.

One has to be careful how to pitch this blog (no pun intended).  There may be a lot of camping-loving individuals out there and it would be silly of me to alienate most of them but I think there may be two types of people – those that enjoy camping and those that don’t and perhaps we should call a truce at the outset.  I also want to make it clear that the weekend was actually a success in the end with lots of fun had by the kids especially, but for a weekend away with about 6 hours of packing and unpacking (including tent pitching etc) and 6 hours of driving, the 6 hours of rest and relaxation did not seem to be a fair return.  Of course I exclude the 12 hours of sleeping from the rest and relaxation as sleeping in a tent in quite uncomfortable heat amidst an unusually high number of latter aged men that almost certainly have deviated septums is not classified as R&R in my book.

We had been invited by good friends to spend the weekend at Bontebok National Park for our inaugural camping experience – they are seasoned camping folk and made it seem so easy.  It seemed like an eminently good idea.  I love Bontebok National Park – the birds are really good, there is a great river for swimming and there is plenty of cycling potential.  Perhaps I forgot that most of my visits to Bontebok were for quick birding trips and a dip in the river in the midday heat during a number of our attempts at Birding Big Day in the Overberg.  I had never had to mix all that fun with a whole lot of hard work. 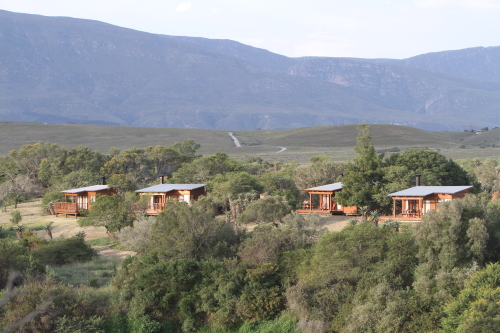 It all started well enough with a reasonably early escape from the city after a work week from hell.  Trailer and kids were loaded and we headed east.  Not even the 25 minute check-in process at the reception area (what is that all about?) could dampen my spirits.  I had 45 minutes of light left and I’ve been told that 6-man tents newly bought from Sportsmans Warehouse take 20 minutes to pitch even for the most impractical of husbands.  I was feeling confident – a little excited , in fact.  I was going to provide lodgings for my family.  I would be revered for years.

Stupidly, I didn’t take into account the number of changes in location for our tent that my wife would request (umm, demand…).  You would have thought that we were building our retirement house, not just finding a flat piece of ground for the next 40 hours.  The first site was too close to the noisy students (to be fair to the students it turned out they were all fifth year medics and on the whole they behaved a lot better than we did); the second spot was a little uneven (a spirit level would have struggled to read the slope); the third spot had no shade and the fourth spot was so hard that I couldn’t get in a single peg.  We eventually settled on the second spot and I told Jean that if she felt the bumps under the luxury blow-up mattresses that I had just spent an unreasonable amount of money on then I would move it all again. 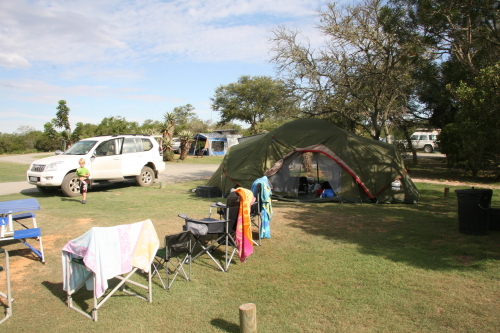 I need to add that all these inter-site moves took place after most of the tent was standing upright.  It was a comical scene with 4 of us lifting the corners of the tent and shuffling from one site to the other.  I felt a lot like the angulate tortoises that are so common in the park.  I might clarify why there were only 4 of us dragging the tent.  Jeanie had decided that the best way to speed up the process of finding a home for the next 2 nights was to throw a little tantrum and stamp her feet.  It was not a proud moment for the Buckham family with all three boys wondering when they would get to bed and fellow campers looking on with pity contemplating rushing in and helping but perhaps being a little nervous of getting stuck in the middle of a domestic scene.

Before you all worry about Jeanie and I, we soon made up and we clicked into gear as the well-oiled partnership that we always are and in no time the tent was in place, the kids were bathed and fed and they were tucked into their sleeping bag at a reasonable hour.

It was at that time that our friends arrived and it was our turn to watch the “seasoned” campers flounder in the darkness.  They were the lucky ones as the neighbours weren’t able to see their domestic squabble as it was too dark.

The birding over the weekend was really good with the main focus being a concentrated blitz on the pentad in which the camp site is situated (3400_2025).  It is an extremely diverse pentad with the Breede River forming a natural south-westerly border and the Marloth Nature Reserve on the foothills of the mountains north of Swellendam making up the northerly boundary.  The acacia lined river is in strong contrast to the fynbos in the Marloth Nature Reserve and this was reflected in the list that was generated over about 5 hours of concentrated atlassing.  We managed most of the acacia specials (Acacia Pied Barbet, Long-billed Crombec, Fiscal Flycatcher, Red-faced Mousebird) as well as the fynbos endemics (Orange-breasted Sunbird, Cape Sugarbird, Cape Siskin and Victorin’s Warbler).  In all, I managed a list of 105 species over the two days which is primarily a function of the fact that I was able to cover some good ground.  The first stint was covered on my bicycle on Saturday morning with a 65km mountain bike ride from the camp-site to Marloth Nature Reserve.  The trails were challenging and the views were breath-taking.  Most of the other birding was spent in the company of my two older boys and a few of their friends on one or two drives around the park and through Swellendam. 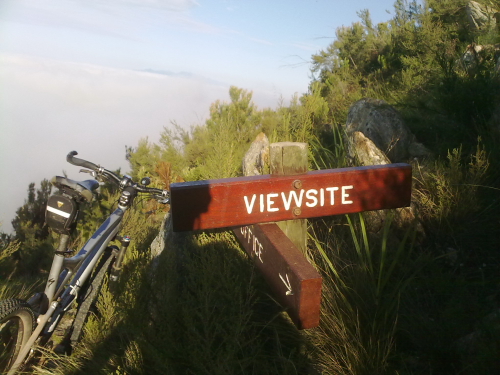 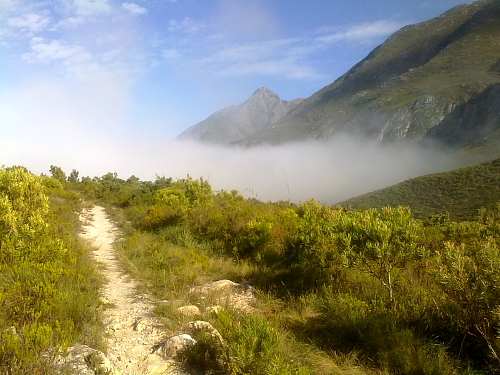 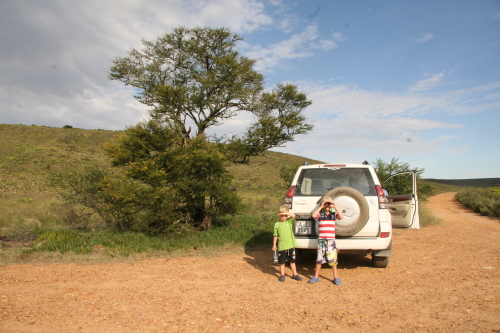 We managed a number of tough Western Cape birds which I am certain will throw out a whole lot of “out of range” forms.  The special birds included three separate European Rollers at the entrance to the National Park (adjacent to the Swellengrebel airfield); a number of Amur Falcons in amongst the Lesser Kestrels (also near the entrance to the National Park); a number of singing Willow Warblers in the acacias alongside the river;  and, for me, the most special bird was a number of African Quail-finches also near the airstrip.  I have recorded these birds on a few occasions at Bontebok but it is a pretty tough bird to find in the Western Cape and given the dry conditions alongside the airstrip I did not expect to find them this time.  We stopped for breakfast and I heard the distinctive “skreek-skreek” as a number of birds flew past us.  It was a bittersweet find as it represented a lifer for Tommy and there was virtually no chance that we would be able to see them – I was going to struggle to successfully point them out.  Even when they call directly above your head they are almost impossible to see given their size but we were in luck as a threesome of Grey Rhebok trotted by as we got out of the vehicle and in so doing they flushed a pair of finches which were clearly seen as they flew over us.  I don’t think it is the best view one is ever likely to have but Tommy is prepared to take lifers any which way he can.  It was also nice to see the resident pair of Secretarybirds that have made Bontebok their home.  The Eastern Drive in the park is certainly the best place to find this increasingly endangered bird. 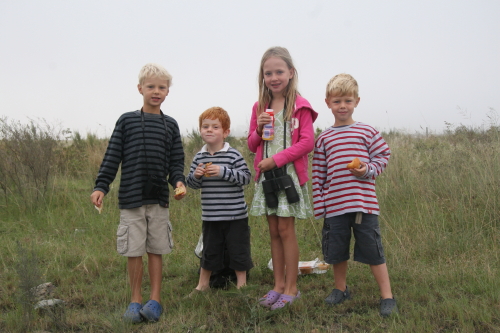 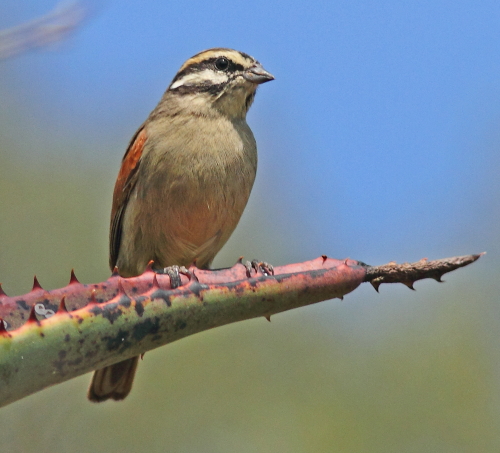 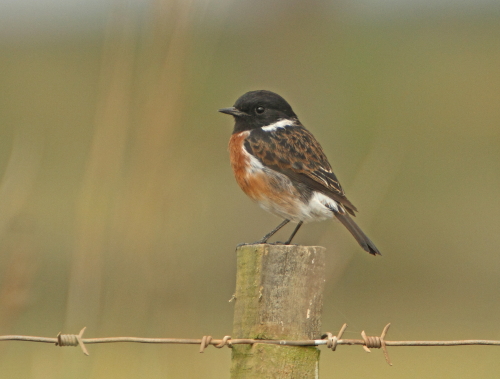 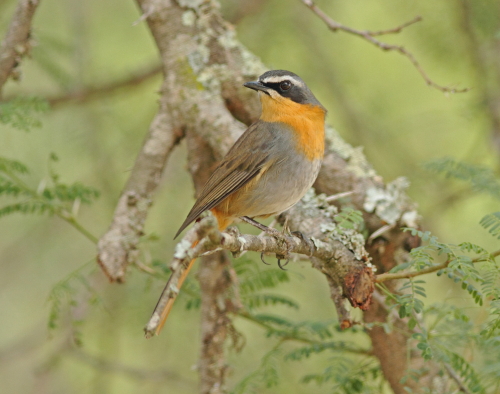 The biggest miss of the weekend is an indictment on my wife’s birding credibility.  Whilst I was out on the Sunday morning trawling the distant corners of the pentad adding exciting species like Blacksmith Lapwing and Laughing Dove she was enjoying her own peace and solitude running along some of the gravel roads of the park.  Just outside the camp she happened to see a Jacobin Cuckoo fly past her that she nonchalantly mentioned to me on my return.  Given that this would represent the most westerly record of this bird since the atlassing period commenced (or possibly ever) it is sad that she was the one to see it!!  I have diplomatically decided to leave it off the pentad list as the ORF would come directly to me for vetting and it would either be seen as a conflict of interest if I accepted it, or, alternatively it could cause some marital strife if it was rejected.  Best left off the list, I say…

It was a highly successful weekend for Tommy though with 7 lifers for his list pushing his overall total to 294.  His lifers were African Quail-finch, Secretarybird, Large-billed Lark, Southern Black Korhaan, Grey-backed Cisticola, Long-billed Crombec and Fiery-necked Nightjar.  The latter species was probably the most memorable one for me.  There are many Fiery-necks in the campsite and on our first night several of them started calling within 20 metres of our half-built tent.  Tommy was nagging me to go and look for it but given the rather “confrontational” circumstances we had to give it a miss.  I promised I would take him to see it the next night.  The consequences of this is that I ended up dragging about 10 young kids around the campsite on the second night all shining their torches into the bushes hoping for a glimpse of the active nightjars.  We eventually found an obliging bird perched just above one of our neighbour’s tent and I was very relieved that they were relatively tolerant of all the noise and disturbance outside their tent.  It was also a way for me to get out of washing dishes so it was a successful venture.

Despite the extreme heat over the weekend (we recorded 38 degrees on Saturday afternoon) we managed to stay cool down by the river with much time spent swimming.  We also relocated all our mattresses for a lunch time snooze on the Saturday afternoon as it was way too hot inside the tent (it turns out that my carefully chosen spot next a big tree wasn’t so careful after all with the shade of the tree completely missing the tent).  The upshot of the mattress move was a fair amount of collateral damage with three out of five of our blow up mattresses suffering punctures (that’s something they don’t tell you on the instruction manual) meaning that there was some begging for surplus sleeping equipment later that night. 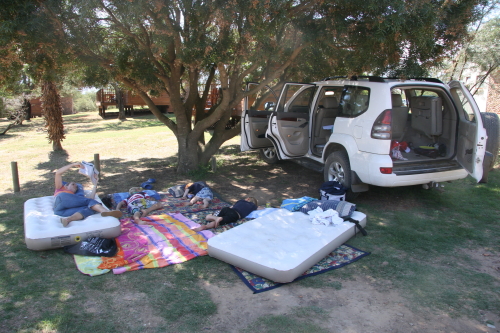 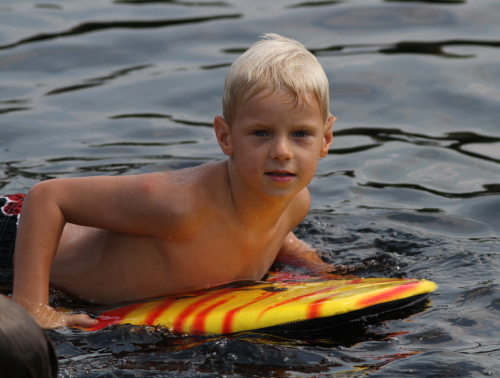 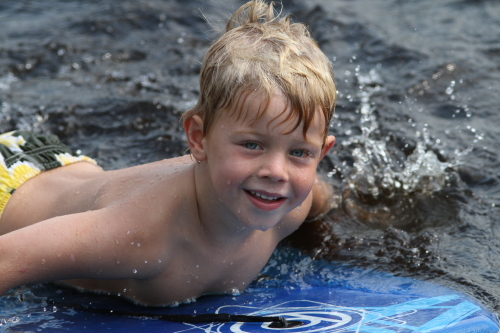 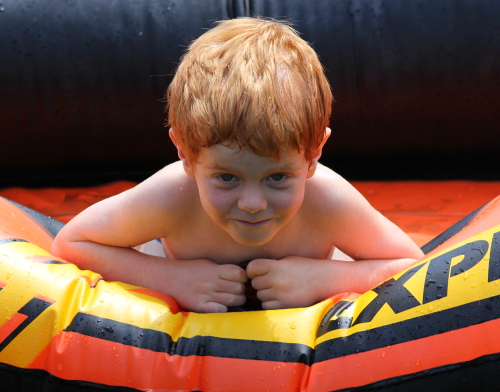 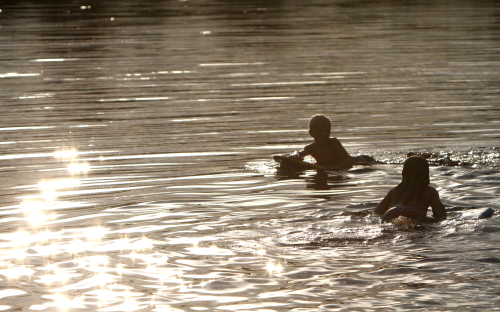 Although it was hard work and we were clearly way too disorganised I still think that we came out the other end with a great family experience behind us.  I’m prepared to give it another bash but it may be just the boys the next time… 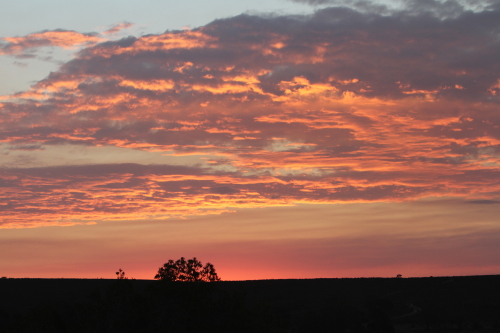 One Response to Bontebok National Park – camping with the Buckhams