Last night Cliff and Suretha Dorse and I returned from a whirlwind trip to the north-eastern corner of the Western Cape.  Through my involvement in the vetting of the SABAP2 records in the Western Cape I have had the opportunity of seeing the wealth of different species that occur in the Beaufort West and Murraysburg area from the out of range forms that I receive and so with the gap in the diary to head up there we made the journey on Friday night.

After a rather hellish drive along the N1 on Friday night we were grateful to arrive safely at the modest but adequate Oasis Hotel in the main road of Beaufort West.  The hustle and bustle of the main town was going to be a substantial contrast to the peace and quiet we would experience over the next two days.

Local birding expert Japie Claassen joined us at 5am on a disappointingly overcast Saturday morning.  Our first stop was the Molteno Pass which is approximately 10kms north east of the town.  We were quickly trying for Cinnamon-breasted Warbler but despite quite a lot of effort this bird remained very unresponsive.  This didn’t bother us too much as we were more than adequately compensated by the wealth of other rock dwelling species.  In a short period up on the pass we worked through African Rock Pipit, Layard’s Titbabbler, Ground Woodpecker, Short-toed Rock Thrush, Booted Eagle and Dusky Sunbird.  These birds were the special ones and were joined by a multitude of more common species.  One nice bird was a rather lonely looking Lesser Kestrel which, according to Japie was the first one of the season. 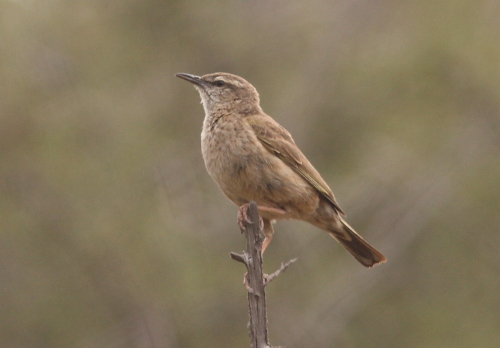 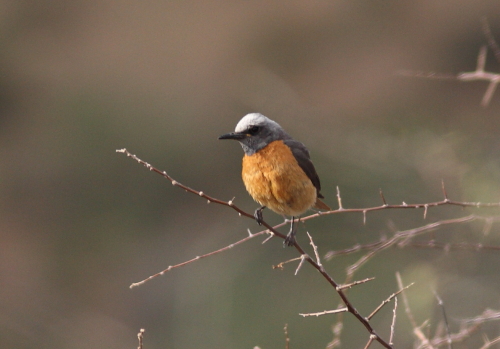 Once back on the plain heading back towards town we worked our way through an acacia river course with the highlight being a single male Red-backed Shrike and a small group of Black-throated Canaries. 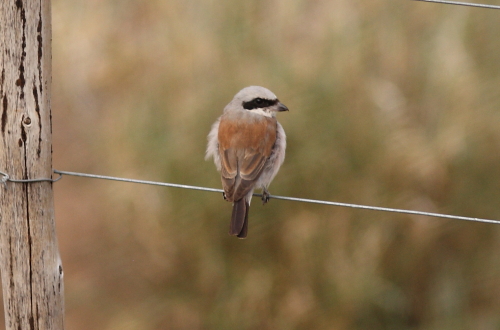 Our next stop was the guest lodge called Teri-Moja which lies about 10kms south west of the town where we quickly found the two Yellow-billed Storks that Japie had found a few days previously.  In addition to the Yellow-billed Storks there were 9 Black Storks, a White Stork, a pair of Blue Cranes, a pair of African Fish-eagles and a multitude of cormorants and Ibis all congregating around a desperately small muddy puddle that was literally drying up in front of our eyes.  The Yellow-billed Storks are seriously rare birds in the Western Cape but judging by the state of the available water it is doubtful that they will be there for long. 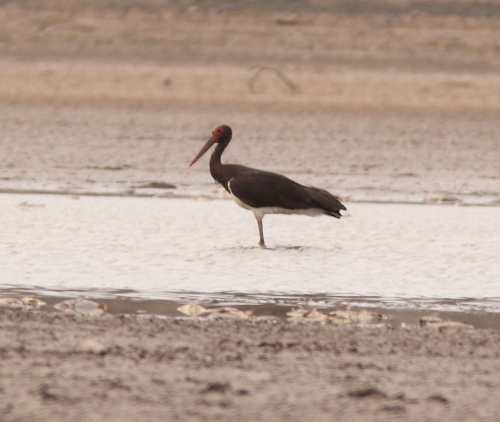 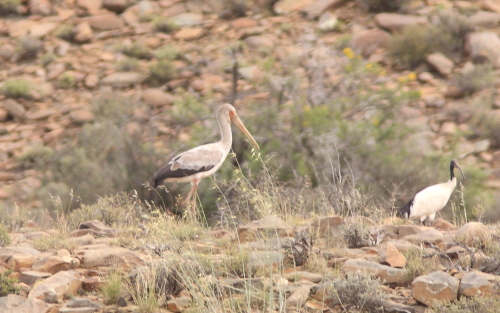 We then spent a fair amount of time staking out Japie’s Sclater’s Larks on some scrubby plains south of the Steenbokkie Nature Reserve.  We were only rewarded by a number of Larklike Buntings drinking at the water hole after an hour’s wait so decided to apply a slightly more mobile approach.  The overcast weather certainly kept the birds away from the drinking trough.  Not too serious though as Japie’s eagle eyes picked up a group of seven Sclater’s Larks in the roadside scrub.  Other species included Spike-heeled Lark, Karoo and Trac-trac Chat and Karoo Long-billed Lark. 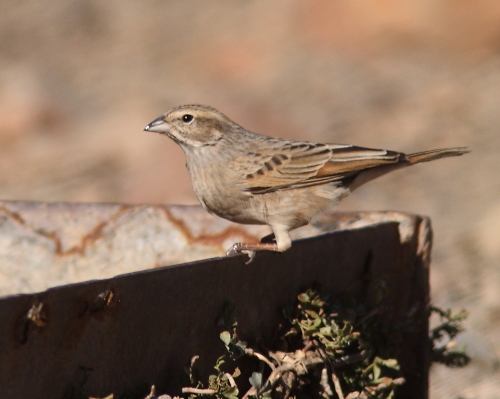 We then headed back into town and after an energy invigorating lunch at the local Spur we swapped Japie for Stefan Theron who together with Japie and Jaco Janse van Veuren have been doing an enormous amount of atlassing in the north eastern part of the Western Cape.  Between the three of them they have submitted over 1400 cards.  If you have a look at the coverage map for the area you will notice how much attention it has been getting.

Spending a full 24 hours with Stefan was an absolutely amazing experience.  He took us to all his haunts for some incredibly special species and he has a knowledge of the veld which is unsurpassed.  He walks quickly through the bush choosing to use his legs rather than a vehicle and scampering after him is hard work but if you stick close you get to see things that the normal person would certainly miss.

We drove the 150kms or so from Beaufort West to Stefan’s parent’s farm which is called Vierfontein.  The drive was during the hot part of the day so there were not too many stops but we did pick up Kori Bustard and a few singing Sabota Larks.  We reached the farm at around 4:30 pm and then it was off to work.  For the next 4 hours we walked around Stefan’s patch and shared in all his amazing species.  It is difficult to list all the bird but some of the more special species included Red-billed Firefinch, Scaly-feathered Finch, Red-billed Quelea, Red-headed Finch, Black-throated Canary, Dusky Sunbird, Namaqua Sandgrouse, Pale-winged Starling and Rufous-cheeked Nightjar.  While charging through the veld we came across a substantial Cape Cobra which was an exciting experience.  It tried a lot harder to get out of our way than we were trying to get out of its way. 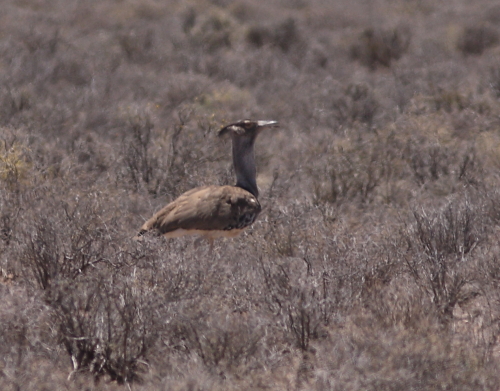 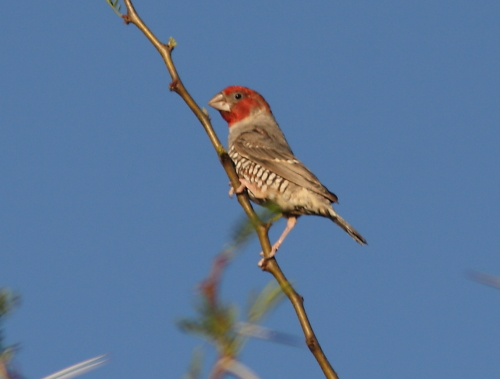 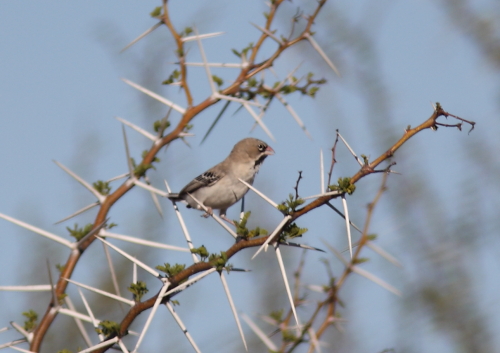 Whilst walking through the veld picking up these seemingly outlandish Western Cape Birds, Stefan was quietly delighting in proving all his out of range forms right.  Over the last few years I have given him such a hard time whilst vetting his records and now it was his turn to prove me wrong.  Birds like Red-billed Firefinch and Red-headed Finch which I had originally treated with skepticism were actually “trash” birds in his patch.

Stefan has had other amazing species here including Kurrichane Buttonquail, European Nightjar, Bateleur and African Firefinch.  The farm is unfortunately currently experiencing the worst drought in living memory so it only beggars belief what amazing birds could turn up in wetter years.  Stefan gave us his Murraysburg list and it is filled with some amazing species that he has recorded over the last 30 years.

After walking for a few hours we stopped at a kloof as the sun was setting and Suretha picked up a Cape Eagle Owl perched on one of the distant rocks.  It stayed for a few moments and then headed off for its evening of hunting.

We did a brief night drive which produced one of the highlights of the trip which was an Aardvark foraging amongst the scrub.  I had seen this animal once before in the Bushmanland area but this was equally as special.  Stefan told us that the farm was also a good place for Black-footed Cat although in all his years he has only seen it a few times.

We celebrated the day’s successes with one of the better Karoo braais you could ask for and we slept well with the next day’s excitement ahead of us.

The day started off with another really good Western Cape bird.  Stefan looked up at a stand of alien trees and said that the Gabar Goshawk is resident here and just as he said that a bird sailed over our heads and gave us great views. 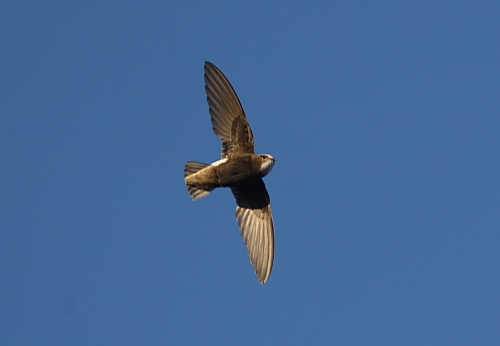 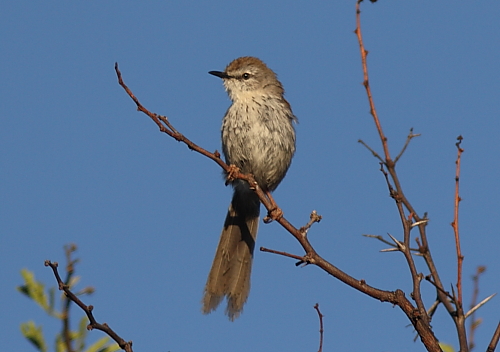 We headed east to Murraysburg and stopped at Stefan’s stakeout for Northern Black Korhaan and Eastern Clapper Lark.  These two birds were found in a matter of a few minutes. 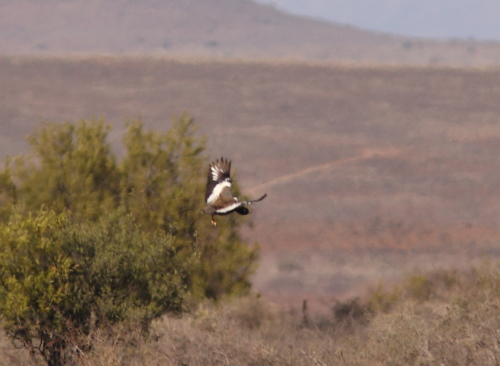 Time was short and so we headed for our most important bird of the weekend – Drakensberg Rockjumper.  Stefan discovered a Western Cape population of these birds about 6 or 8 months ago.  Naturally his ORF’s remained unaccepted until the evidence was too overwhelming to ignore.  Before yesterday morning Stefan had found 3 sites for these birds on some of the higher peaks east of Murraysburg.  He was now taking us to a potential 4th site which I thought was a brave move considering the fact that he hadn’t found them there before.  We stopped to chat to the farmer on whose land we would be traipsing and soon we were bumping along a farm road reserved for only the hardiest of vehicles.  About half way up the mountain my wife’s car decided it was not going any further up the hill and so we bundled out and started the slog up to 1800m in altitude where Stefan said we would find the birds. 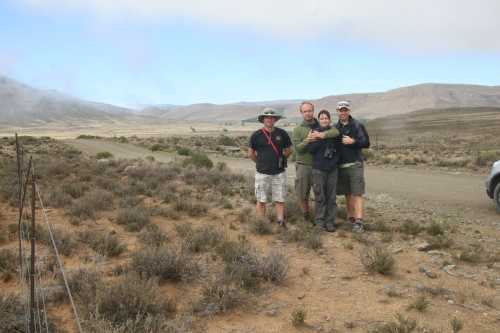 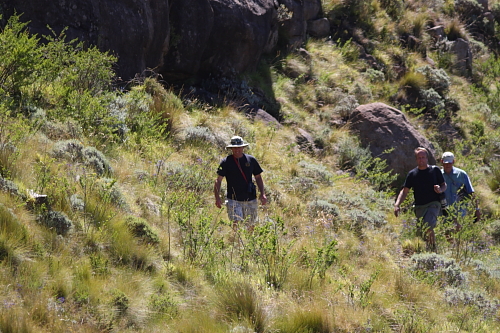 Looking around at the surrounding scenery one would find it hard to believe that we were in the Western Cape.  We were in the western reaches of the Sneeuberge with some of the highest peaks of the Western Cape around us.  The Karoo like landscape 40 kms west of where we were gives way to high altitude grassland which is far more in keeping with the higher reaches of the Eastern Cape and Southern KZN.  The habitat was looking better but we were still at 1600m and had a long way to go.  We reached the top of the ridge at 1840m and were surrounded by the summer mists which come with the south easters.  Like clockwork the mist cleared and the dramatic mountain scenery revealed itself.

After walking the ridge for about 20 minutes Stefan and I simultaneously heard the distinctive piercing whistle echoing across the ridge.  After a frantic search for about 10 minutes Stefan found a male bird on top of a rock.  A quick check of the GPS confirmed that we were still in the Western Cape and it was suddenly a bird on our lists that defied belief.  We now had a 4th site for Drakensberg Rockjumper in the Western Cape – who would ever have thought.  I managed a record shot of the worst kind and despite a small amount of playback (let’s be honest – these birds have never been exposed to it before) the birds would still not come closer.  By the time we left them it is possible that they had moved off into the Eastern Cape but for long enough they were ours to tick.

Now all that was left for the trip was the scramble down the mountainside and the 7 hour drive back to Cape Town.  Some would think it was utter madness (yes, that included Stefan) but for two days we birded in such refreshing habitat that it was truly invigorating.

Over the weekend we recorded 135 species and I added plenty to my regional list (won’t say how many as it is a little embarrassing).  We saw some spectacular mammals (the Aardvark by some distance the highlight) and we also came across a few good reptiles including a Rock Monitor that Cliff bravely assisted off the road!  I also managed to atlas 4 pentads and so added to my personal pentad and SABAP2 tally.

For anyone that would like a little more info they are welcome to contact me.  I would like to officially thank Japie for the time he gave us in Beaufort West and Stefan for opening our eyes to some of his spectacular areas.  They are both excellent birders and fantastic companions on a trip of this nature.

One Response to Stretching the Western Cape boundaries