A few weeks ago I posted an RFI for the Vic Falls and Livingstone area as my wife and I were celebrating our anniversary there.  It surprised me how little response I got considering how rich the area is in birdlife.  I got a few mails but on the whole there was not much to go on.  Darryl Tiran who operates as a bird guide on the Vic Falls side contacted me and fortunately from there I was able to secure two full mornings of birding with Darryl.

We returned from our trip on Tuesday evening and even though we only spent 3 days there I managed to squeeze in a lot of very productive birding.  We stayed at the new David Livingstone Safari Hotel and Spa which is a very comfortable hotel approximately 3 or 4kms upstream from the falls on the Zambian side.  The hotel has river frontage and is very pleasantly situated although it is positioned right next door to a camp site and backpackers lodge which caused us a few headaches with late night noise – the last thing you need when trying to relax in a peaceful setting. 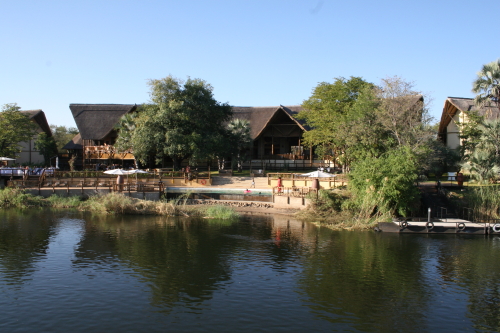 The Livingstone side is typical of a bustling, busy African town.  There is a lot of traffic and the roads are dusty and fairly poor.  We were transported to the border by an efficient taxi service arranged by Darryl and we never had a reliability problem.  The drive to and from the border indicated that there seems to be little easily accessible birding but I know this is probably not a fair comment as we were never escorted by a Zambian based birder. 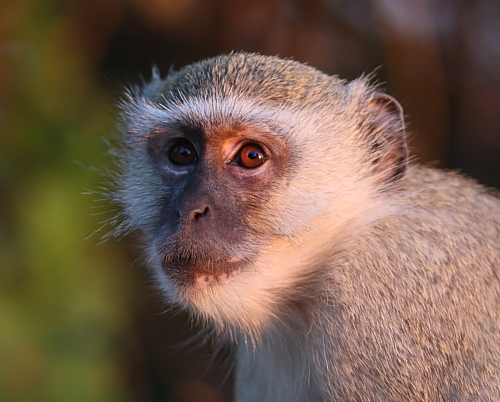 I really only ended up birding on the Zambian side in the hotel grounds and at a very nice sewerage works very close to the hotel (more about that later).

This trip report hopefully will indicate a few spots which we visited with Darryl and highlight a few of the birding “must sees” in a visit to this area.

We started our birding off with a short walk from the Zim border post to the view point at Batoka Gorge which is just downstream from the falls.  Batoka Gorge is right next to the Vic Falls Hotel.  This fairly degraded mixed bushveld and woodland was very productive with Lizard Buzzard, Eastern Bearded Robin, Brown-crowned Tchagra, Southern Grey-headed Sparrow, Red-billed and Jameson’s Firefinch, Terrestrial Brownbul, Black-backed Puffback, Tropical Boubou and Emerald-spotted Wood-dove.  The gorge itself had African Black Swifts and Rock Martins rushing past with Red-winged Starlings perched on the rocky cliffs.  Unfortunately we had no raptor fly-pasts as this area is still reasonably good for Taita Falcon. 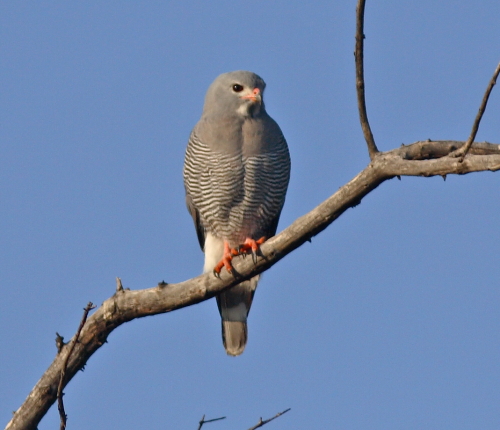 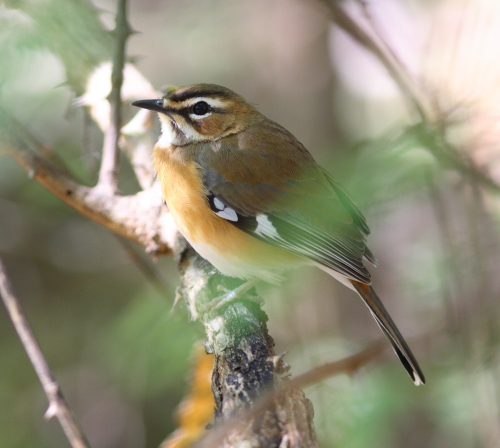 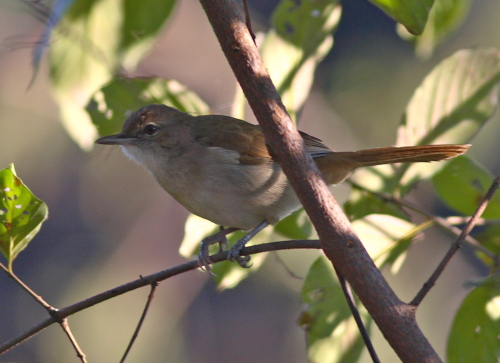 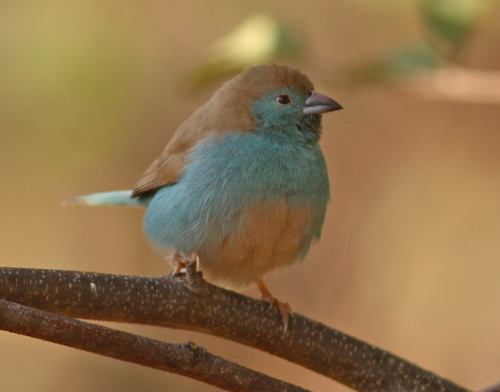 We then took a drive along Zambezi drive which travels along the Zambezi river upstream from the falls.  This was a very productive drive and it was done several times during our birding visits.  In addition to most of the species mentioned above we saw Golden Weaver, Bearded, Cardinal and Golden-tailed Woodpecker, “wall to wall” Collared Palm-thrush, Grey-headed Bush-shrike, Red-faced Cisticola, Tawny-flanked Prinia, Chinspot Batis and Grey-backed Cameroptera.  We spent a lot of time looking out for Western-banded Snake Eagle, which according to Darryl is the most reliable spot.  Unfortunately during our stay we never had the fortune of seeing this bird. 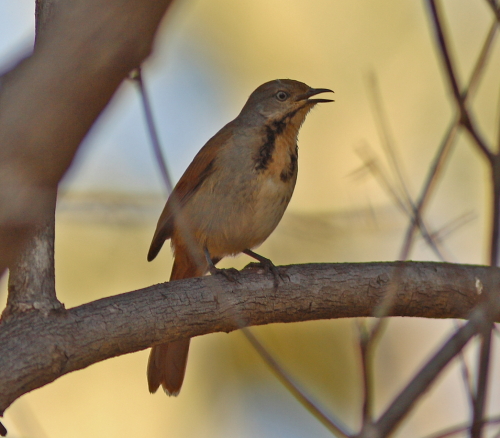 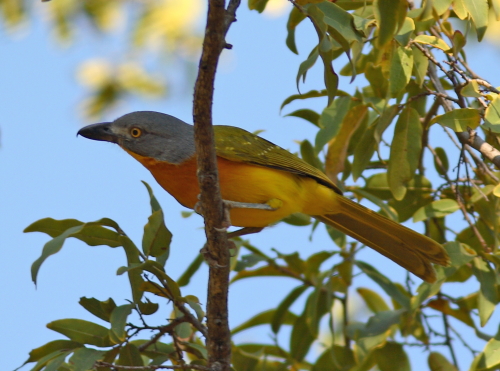 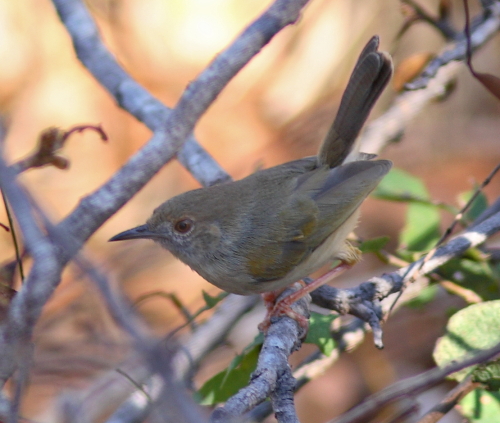 We moved a little away from the river towards the Elephant Hills hotel and drove over a small weir at 17 52 54S 25 50 30E which has permanent marshy conditions, even now in mid winter.  This little spot is adjacent to the golf course and this seep had Long-toed Lapwing, Black Crake and Greater Painted Snipe.  In summer this little area must be full of rallids.  Along the dry bushveld to get to this spot we had woodland birds such as Shikra and Meyer’s Parrot.  We also managed to catch up with Northern Grey-headed Sparrow, Purple Roller and Red-breasted Swallow. 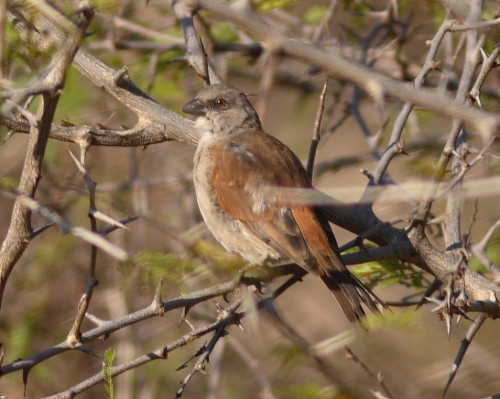 For me, however the highlight of the trip was the river trip that Darryl had organized.  We boarded a very comfortable boat near the A’Zambezi hotel and chugged along the river edges.  The birdlife was phenomenal with species like Ovambo Sparrowhawk, Malachite, Giant, Pied and Half-collared Kingfisher, African Finfoot, White-crowned Lapwing, Martial Eagle, Grey-headed Parrot, White-browed Coucal, Open-bill Stork, the first arriving African Skimmers, White-fronted Bee-eater, Reed, and White-breasted Cormorant, African Darter, Grey, Green-backed and Rufous-bellied Heron.  The trip was over all too soon and our next destination was the falls. 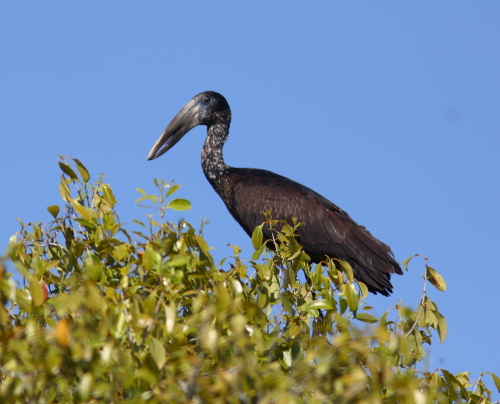 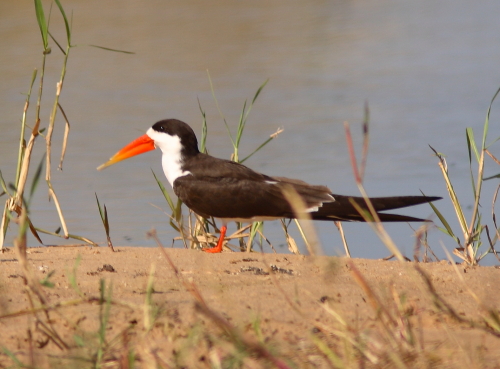 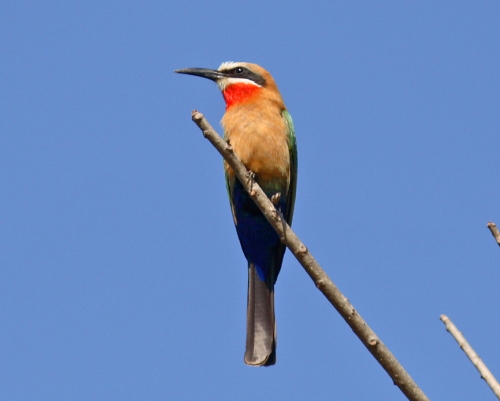 The falls are obviously always worth a visit but the rain forest is not ideal for birding.  The spray makes it difficult to carry a camera and the noise of the falls makes it tough to hear the bird calls.  After our whistle-stop visit to the falls we then headed for a very surprising experience.  We stopped in at 1pm at the Victoria Falls Safari Lodge (17 55 02S 25 49 10E).  The mopane woodland surrounding the hotel had some nice bird parties including Brown-crowned Tchagra, Southern Black Tit, Common Scimitarbill, Chinspot Batis and Cinnamon-breasted Bunting.  This however was not the surprise.  Over the last few years the hotel staff have been putting bones out for the vultures at exactly 1pm every day (the bones are left overs from the Boma restaurant).  At around 12:45 the sky starts to fill with hundreds of Hooded and White-backed Vultures and many Marabou Storks gathering for the scramble for a few morsels.  At 1pm the vultures come down to squabble.  They have become extremely habituated and it is an amazing experience to sit less than 8 metres away from hundreds of vultures fighting over far too few scraps. 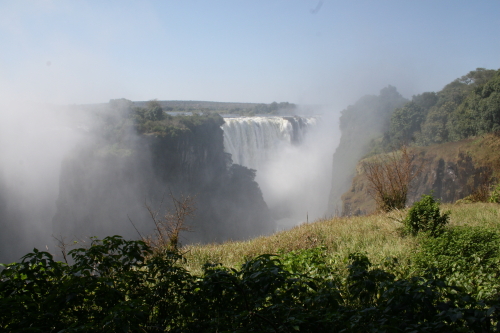 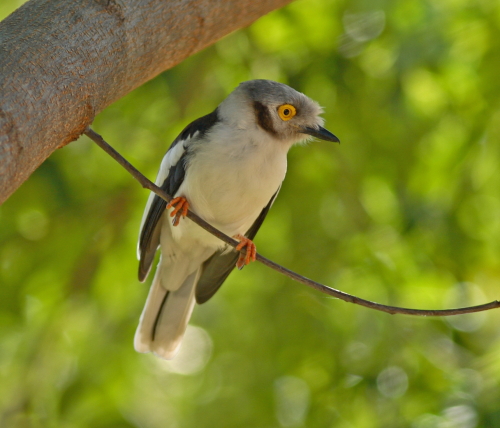 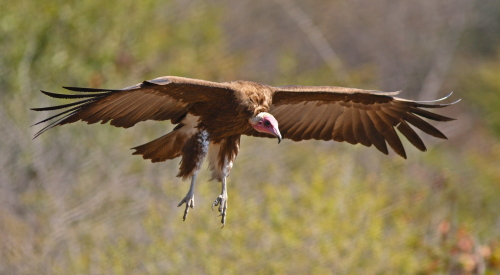 Other sites that we visited included the Elephant Hills Golf Course which had some nice birds although at this time of the year the woodland flanking the fairways was quieter than usual.  We did catch up with a group of Retz’s Helmet-shrikes as well as an African Golden Oriole.  On one of the wetter sections of the course there was a group of African Quail-finches.  The pool area had large numbers of African Palm-swifts (very prevalent all over this area) as well as a juvenile Klaas’s Cuckoo and a pair of Yellow-bellied Greenbuls.  Finally we visited a patch of mixed Brachystegia and Baikea woodland approximately 10 kilometres south of Vic Falls.  The mopane woodland on the way there had a mixed group of Little and Swallow-tailed Bee-eaters whilst the tall trees along the river course had Arrow-marked Babblers, Meve’s Starling, Grey-backed Cameroptera, Kurrichane Thrush, Bennett’s Woodpecker, Greater Honeyguide and Pearl-spotted Owlet.  The woodland away from the river was desperately quiet at around mid-day but we did manage to find a Stierling’s Wren-warbler which posed nicely for some photos. 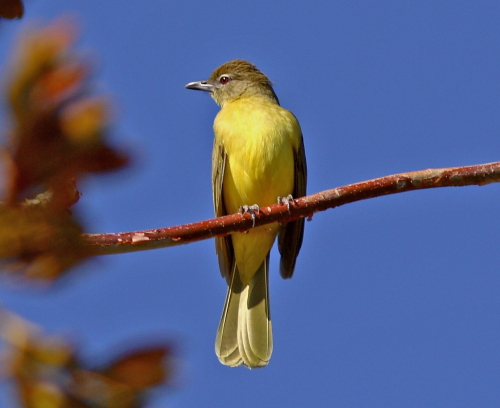 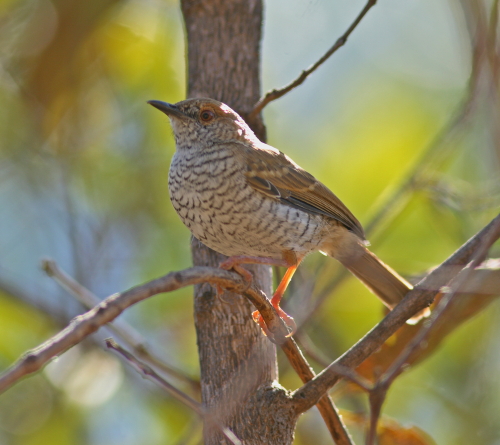 That generally covered most of the spots on the Vic Falls side but given more time and a better time of year the area must be absolutely spectacular for birding.

The only real site I visited on the Zambian side was the sewerage works behind the Chrismar Hotel.  The south eastern corner of the works is situated at 17 52 54S 25 50 30E.  The works is alongside a township area and there is lots of foot traffic but I never once felt unsafe with all people passing through being extremely friendly.  I did however have a staff member from the hotel accompany me which made it a lot more comfortable as he knew the area well and was very interested in the birds of the area.

The sewerage works has 6 large ponds each in different stages of openness.  Much of the area is covered by reeds and an even greater portion is covered by water hyacinth but there are some areas which have open water and there are some very good birds, even at this time of the year.  The warblers are obviously a major feature and despite the fact that it is mid June I heard several Reed-warblers calling.  They were either African or possibly even European but I certainly did not hazard a guess.  The resident warblers (Lesser Swamp and Little Rush) were very common.  The rallids were also evident with African Rail, Black Crake, Common Moorhen and African Purple Swamphen.  In summer I would imagine that is supplemented with Allen’s Gallinule, Lesser Moorhen and I am pretty sure an abundance of the migrant crakes.  Herons were also common with Rufous-bellied being the highlight. 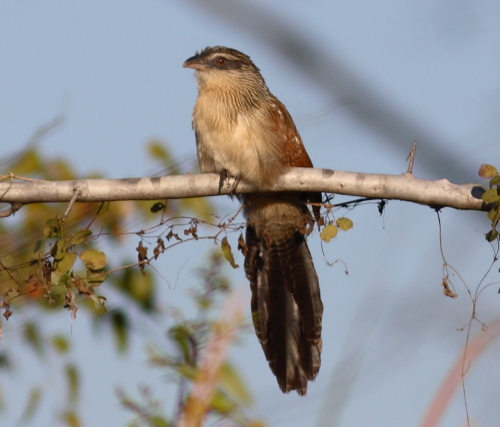 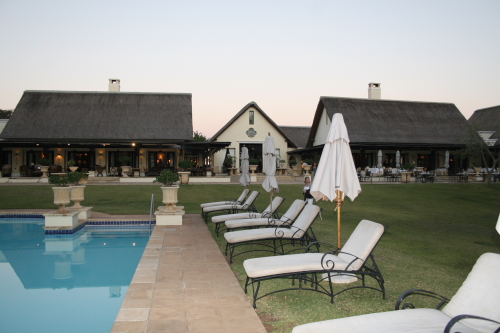 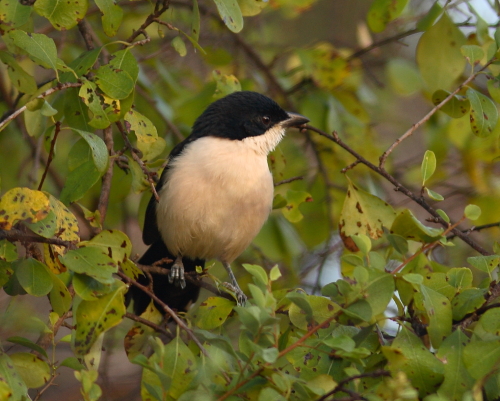 It was an excellent 3 days with spectacular winter weather and around 140 species.  I did bird relatively intensively at times but there was also a fair amount of relaxation.  We missed a few of the obvious specials such as the Snake-eagle, Brown Firefinch and Schalow’s Turaco but it was still nice to catch up with so many other species that I haven’t seen for a long time.

I was very fortunate to spend some time with Darryl who is as passionate as one could be about the birds of the area.  He knows all the spots and there isn’t anything that goes by without being identified.  Times are pretty tough in this area but there are small signs of recovery with some of the shops starting to stock some items.  Be warned that it is very difficult to get change when purchasing small items and the autobanks do not hold any cash.  Accepted tender includes US dollar, SA Rand, Zambian Kwacha and Botswana Pula.  It is bizarre making a purchase which is charged in dollars and then getting a mixture of rands and dollars in change.  No doubt you will always be short-changed somehow.

If you are visiting the area, even for a short visit you will do well to give Darryl a call.  If you would like his contact details please feel free to contact me. 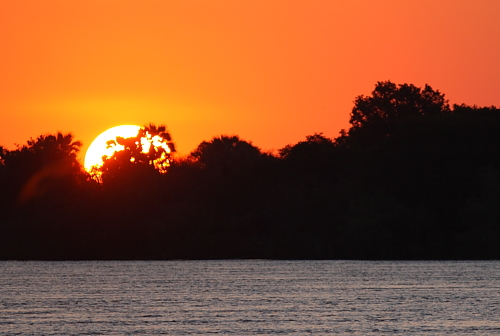