After last week’s blog I said to myself that I really should limit the number of blogs that I write and the regularity with which I post them.  It takes a considerable amount of time to get these up onto the website as well as the fact that the second easiest way for a website to become stale is to post too often (it should be pretty obvious that the easiest way for a website to become stale is not to post at all).  So, this week I was going to stay in my box and not communicate with the outside world.  Well, so much for that!!

There are a few reasons why I am putting you all through a blog this week, the main one being the fact that we were in Plettenberg Bay for the Easter weekend and I happened to get out a little and take a few pics which I really wanted to share.  Those of you that have read my home page will know that this is the easiest way for me to do so.  There are other reasons and those will become clear if you read further.

So, instead of a minute by minute update of exactly what the Buckham family got up to this weekend (let me just say that it involved an unreasonable number of Easter egg hunts for the kids on Easter Sunday as well as large volumes of food for the adults) I will try make this a little more anecdotal with something a little different and then a few pics of some of the birds at the end for those of you that really aren’t interested in my endless diatribe and are just wanting to see some birds.

I thought I’d share my other passion with all of you .Okay, I have to be careful here – any mention of the word “passion” that doesn’t include a story about my wife and kids could land me in hot water – so I will ease everyone’s mind and say that my family is the most important part of my life (contrary to my wife’s belief that I would rather save my Swarovski binoculars than her if there was a choice of one of them plummeting to certain incineration in the molten pit of a volcano).  So, now that everyone knows that it is the family first and everything thereafter, I will tell you all a little about my passion for mountain biking.

I am not an athlete.  That is for certain.  I don’t have the mental, physical and spiritual capacity for excelling in any active pursuit.

However, after a youth spent avoiding any form of physical exertion I realized that I needed to make sure my arteries didn’t clog up before my 40th birthday so I started cycling and running during my varsity years.  The running unfortunately came to an end after a number of marathons and a few Two Oceans ultra marathons and so I was left to concentrate on mountain biking to keep the kilos off.

I chose mountain biking specifically as it achieves a few objectives: it avoids potential death from taxis on the roads; it works the whole body (single track involves a lot of full body exertion); and most obvious of all it allows you to access some of the most beautiful places entirely on your own steam and with that there are inevitably plenty of birds to see and hear.

My mountain biking is mostly limited to the Tokai forest area with the Constantiaberg mast and Noordhoek peak being the true tests of fitness but I have also been fortunate to race in a few multi-stage events such as Sani2C (taking you from Underberg to Scottburgh) and Wines to Whales (traversing the Boland and Overberg from Lourensford Wine Estate to Onrus).  I also make sure that my bike goes with me whenever we venture out on a weekend away.  You would be amazed at how many places you can get to on a bicycle that you cannot get near in a car.

The Knysna/Plett area is possibly one of the best mountain biking areas in the country with trails plunging through indigenous forests, snaking along coastal paths and scrambling up and down fynbos covered slopes and nothing encapsulates all of this more so than the Red Route at Harkerville (situated almost equidistant between Plett and Knysna).

The Red Route is to mountain biking as Mkhuze or Ndumu is to birding (wait for it, there are a few similes in this piece).  It is a challenging route but not so challenging as to be too daunting for the amateur (the weekend warriors are out there in force just as much as the serious cyclist).  It is a like the identification of the Southern African cisticolas – not so impossible that it cannot be done by a reasonably keen participant but one certainly has to apply oneself to get to the end of the trail/ID (see, another simile).  It is also spectacularly beautiful (I am often prone to hyperbole but in this instance it is justified).

The trail travels about 10kms through magnificent indigenous forest where the sight of a Knysna Elephant would not be amiss (okay, that is perhaps too much) but the trees that surround you are full of birdsong (Knysna Turaco, Cape Batis, Grey Cuckooshrike, Sombre Greenbul, Yellow-throated Woodland Warbler) and as you rattle along the well worn single track Bushbuck often cross the path in front of you with the occasional Lemon Dove bursting sideways in a frantic flurry of feathers. 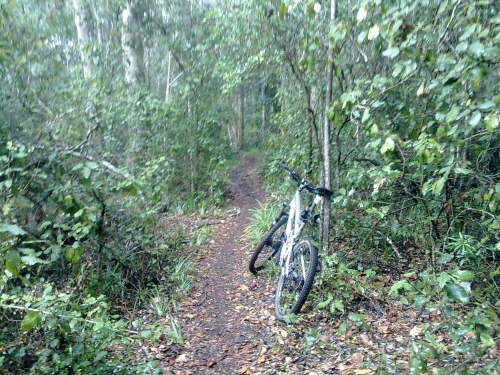 After sating oneself on indigenous forest the trail emerges into the fynbos covered cliffs that overlook the ocean for 5 or 6 kilometers.  The limestone trails provide a stern test with plenty of loose rocks throwing one’s wheels off balance, but just when the energy levels are running a little low the views over the ocean provide a well earned boost. 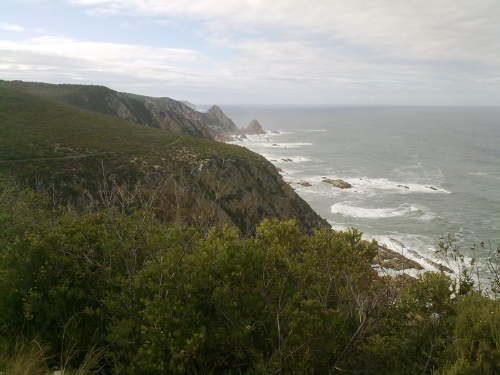 The inevitable climb back to the car (about 7 or 8 more kilometers) is a small price to pay for the fun of the downhill sections and there are plenty more beautiful surroundings to take away the pain.

So, whilst in Plett I had the fortune of doing the Red Route on two occasions which provided some well needed training for my next assault on the Sani2C three day stage race which is no more than 4 weeks away (at least you’ll be spared a birding blog from that weekend but I cannot promise not to tell you more about cycling).

Well, this has been a rather selfish, indulgent blog with precious little mention of my family.  I know my mother will be disappointed when reading this as the blogs have become her source of family feedback since we seldom have time in our busy schedules these days for a telephonic report-back.  However, since I am the author I will allow myself this little indulgence (just this once).

Before signing off I will mention that Tommy and I spent a fair amount of time out in the field atlassing the Plett pentad (3400_2320) which has remarkable diversity with over 200 species on the list.  The most productive area was the very poorly known and unassuming Plett Sewerage Works, the entrance to which can be found at 34 02.178S 23 22.279E.  It is very well kept and has some amazing birding, particularly near the entrance where the road crosses a small bridge over the surprisingly clean and pleasant discharge from the works.  We managed a few good birds there including a large party of Lazy Cisticolas, a single Southern Tchagra, Olive Woodpecker and a feeding frenzy at one of the fruiting trees with Knysna Turaco, Red-winged, Common and Blackbellied Starling all hustling for the more than plentiful pickings.  The settling ponds are great for photography and also included a pair of Hottentot Teals amongst the more common waterfowl.  I was also surprised at the relative abundance of Hirundines.  I would have thought the migrant swallows would have high-tailed it north but there were large numbers of Greater Striped Swallows as well as a fair number of Barn Swallows with impressive tail streamers indicating their imminent departure.  April 26 does seem very late, though. 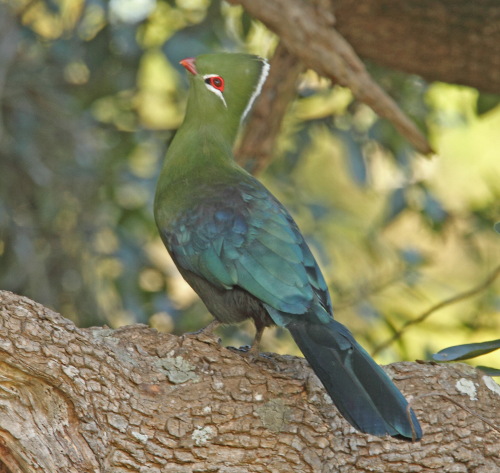 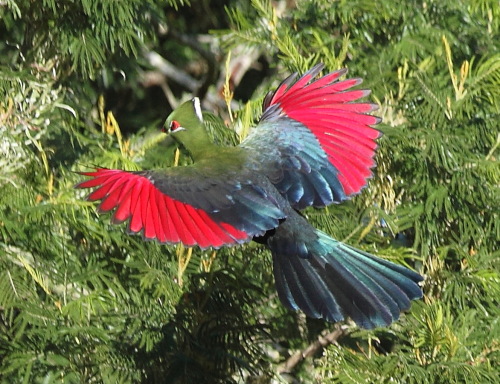 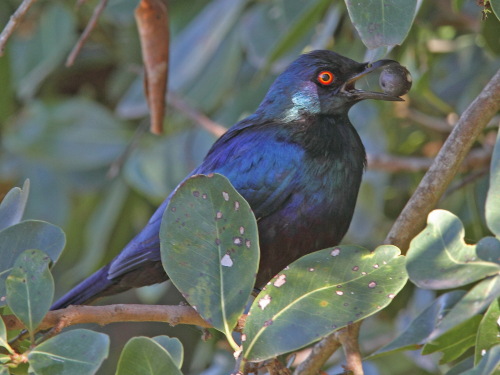 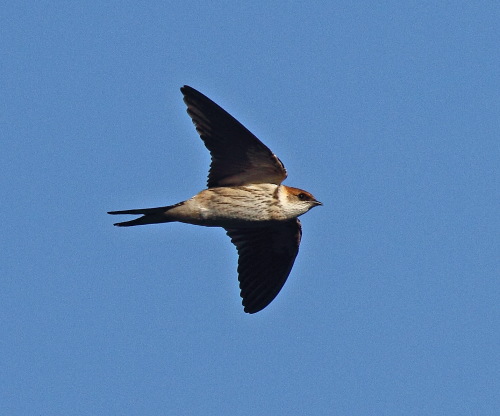 Another good bird for the weekend included a vocal Grey Sunbird however this was marginally outside the square so will unfortunately remain off the list for atlassing purposes.  Grey Sunbird used to be considered a particularly rare Western Cape bird but more recently they are quite regular, particular at the Plettenberg Bay Golf Course.  It helps a lot to know their distinctive cheerful, jumbling call as it cana be tricky to pick out the Grey Sunbird from the female Greater and Lesser Double-collared Sunbirds.  You will note in the photos of the bird I saw on the weekend that the key distinguishing feature of the Grey Sunbird is the bluish-green sheen on the mantle and crown whilst the red pectoral tufts are also pretty clinching as ID features but are seldom seen as obviously as this bird was showing. 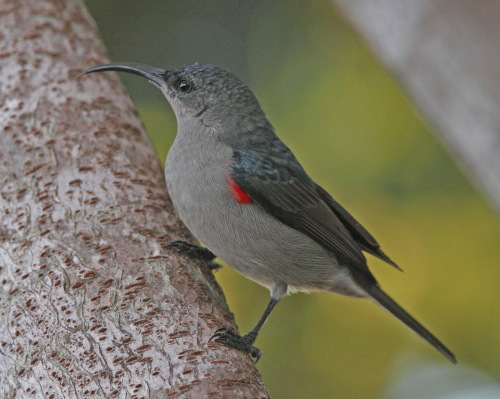 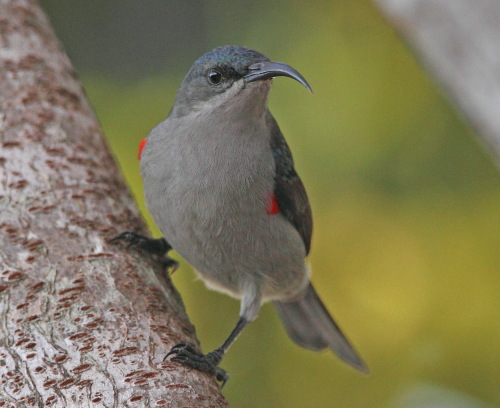 Anyway, enough laundry lists.  For those of you that came for the photos here are some more: 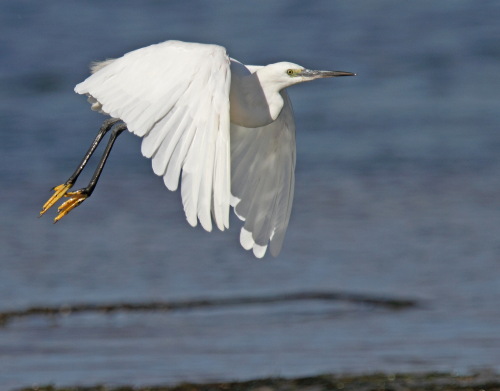 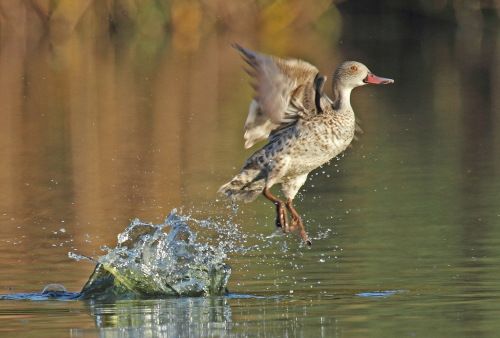 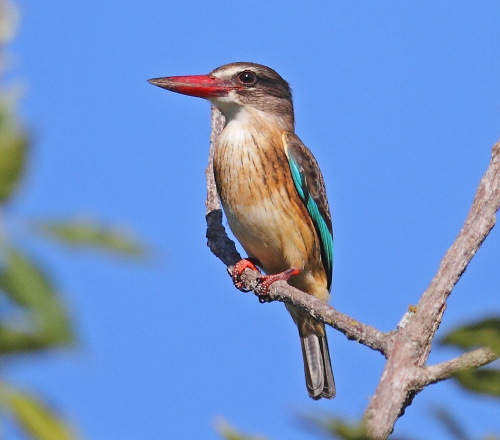 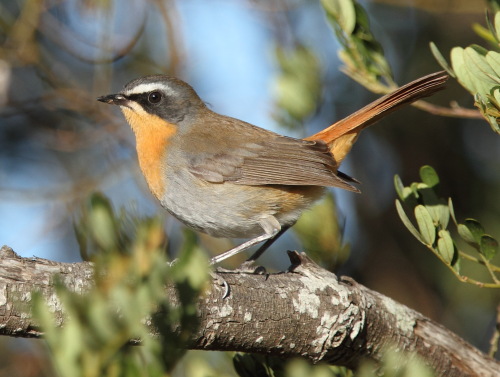 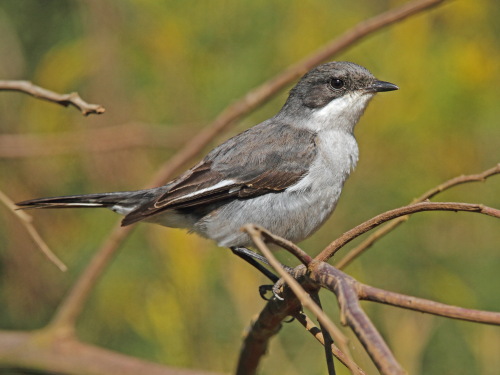 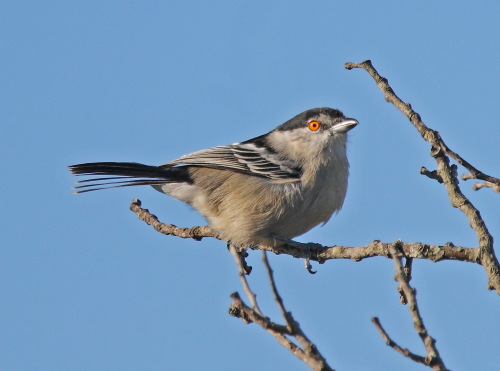 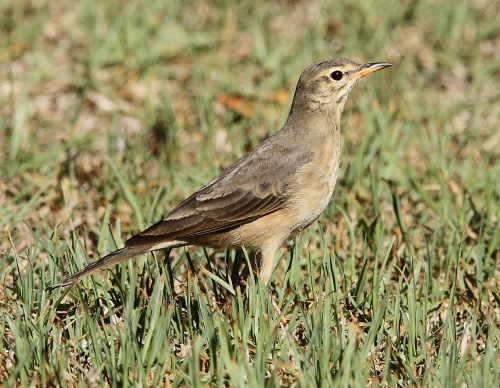 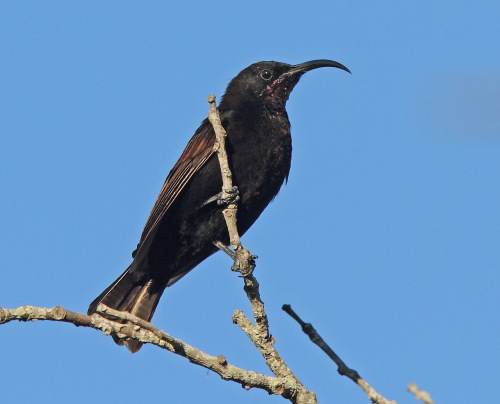 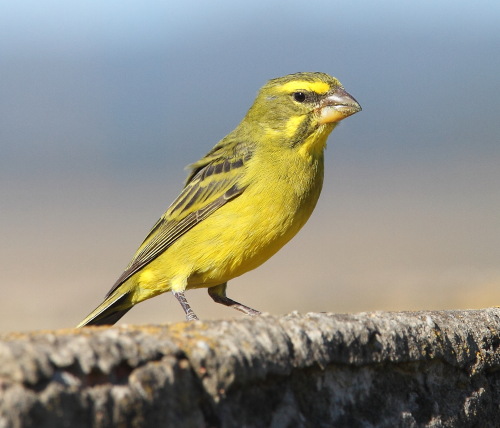