Battered by the wind, but successful

With the comment from a friend of mine that I seem to have a bad case of “writer’s diarrhoea” perhaps it is apt that this week my blog is going to be a lot shorter than previous weeks.  It may be much to the relief of some of those out there that find the detail a little tedious!!

For those of you that read the Rooi Els blog, you will know that the absence of Cape Rockjumper on Tommy’s list was a great disappointment for me, as well as for Tommy.  I had seen them there in a very confiding mood on previous visits and I had hoped that we would achieve similar conditions with Tommy’s newly fledged birding obsession.  Well, it was not to be on that occasion.

Last night as I got into bed I did a quick weather check, fully expecting to see a prediction for more of the same gale force south-easter that had swept over the peninsula over the previous two days.  Remarkably the prediction was quite the opposite, with the wind dropping to a virtual standstill overnight.  With previous hopes of a birding excursion dashed due to unpleasant wind conditions, my mind now wandered as I turned out the lights as to what we could embark on this morning: would it be another visit to Kirstenbosch? What about another attempt at nabbing the Protea Seed-eater in Paarl? How about some breeding plumage waders at Geelbek? Or, perhaps we should be seriously lazy and do another drive around Strandfontein.  Then I suddenly remembered the Long-crested Eagle that was still hanging around in Somerset West. And, we could couple that with a trip up Sir Lowry’s Pass to try yet again for South Africa’s most striking endemic.

Yes, that would be it – Tommy wouldn’t even have a say in the matter – my mind was made up.

After serving up my famous “egg in the hole” bright and early on Sunday morning Tommy and I hit the N2 bound for Sir Lowry’s Pass.  At least the wind will have dropped, I thought to myself as we barrelled along the motorway.  The clouds skidding over the mountain tops was a bad sign.  Perhaps Windfinder.com was wrong this time.

We arrived at the Sir Lowry’s Pass viewpoint and as I bundled out the car I had to walk around to the passenger side and help Tommy open his car door due to the gale pressing it closed all the time.  His 7 year old arms were not yet strong enough to withstand the might of the Cape Doctor.  Windfinder.com had definitely got it wrong.

One of the things that make me so proud of the way Tommy has embraced his birding is that he is seldom daunted by the hardships that sometimes accompany our birding trips.  Sure, we haven’t really stretched ourselves in extreme conditions but he has dealt with oppressive heat in Pongola and pretty long hard days of birding with me and once again he showed his resilience by simply shrugging his shoulders and saying “well, we’re here – we might as well give it a go”. 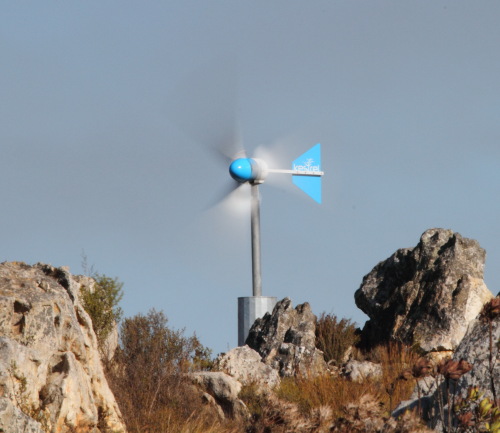 The road crossing at the top of the pass is one of the reasons why I have always favoured the Rooi Els site for Rockjumpers.  There is no slowing down of traffic on Sir Lowry’s to allow for birders to cross, and one would like to see a new kind of road sign one day that has a red rimmed blue triangle showing the silhouette of a binocular-clad person with white labelling saying “Beware – Birders Crossing!”  Alas, that is not the case currently but maybe we can one day put some money together and arrange for a footbridge spanning the gap between the parking lot on the east of the road and the pathway to the Gantouw pass on the west of the road allowing for safe passage of all our internatonal birding tourists.  These are all pipe dreams so it was with a great amount of care that we looked left, and right and left again and then repeated that several times before scuttling across the N2 to the sanctuary of the fynbos slopes.  We were finally away from the traffic but we certainly were not able to hide from the wind.  Birds were scarce and birdsong was even scarcer.

We trudged into the wind towards the pass eventually getting to the gap in the mountains and headed up to the cannons.  I am usually an optimist but all the signs were pointing in the wrong direction.  We had seen less than 5 species since embarking on the trip from the car and with the strength of the wind making standing upright quite challenging I was expecting the worst result – yet another Rockjumper dip… 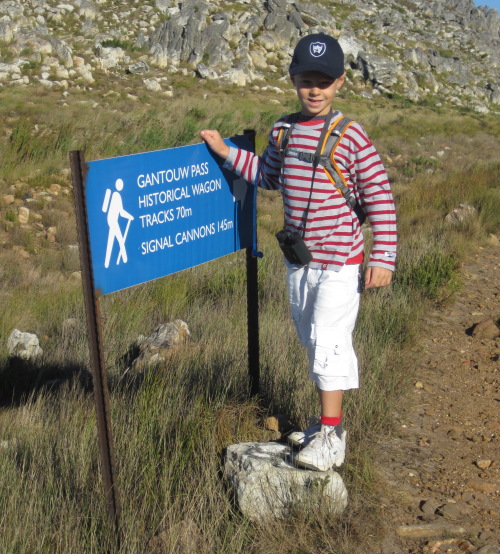 Well, I am pleased to say that our determination paid off.  As we clambered up the ridge that overlooks the cannons a flash of orange burst from under my feet and landed on a rock no more than 5 metres away.  A beautiful female Cape Rockjumper.  Our prize had landed before our very eyes.  Within a minute or two we had located two more birds, both being the even more striking males and so we cowered behind some rocks and enjoyed saturation views.  Tommy’s smile was as wide as ever and we had worked hard for a bird and succeeded. 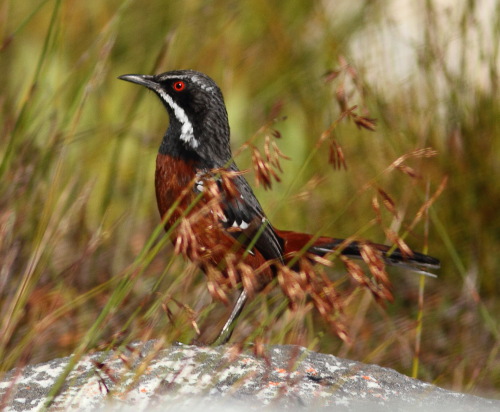 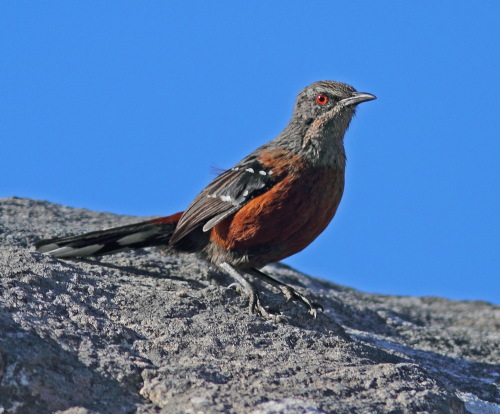 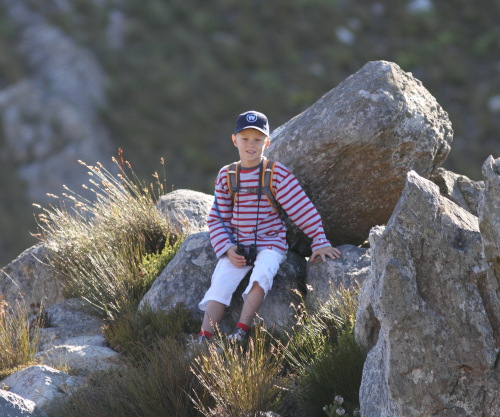 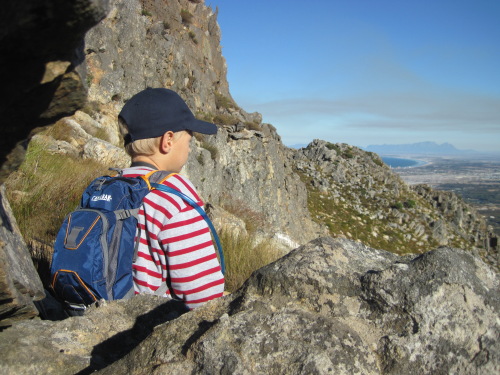 The continuing unpleasant conditions forced us down the pass again and we took the long, happy stroll back to the car stopping every now and again to look hopefully up at some of the ridges on the way, optimistically thinking that a small party of Ground Woodpeckers would oblige as another tick on Tommy’s list, but it was not to be and so we got back to the car having achieved our most important objective for the morning. 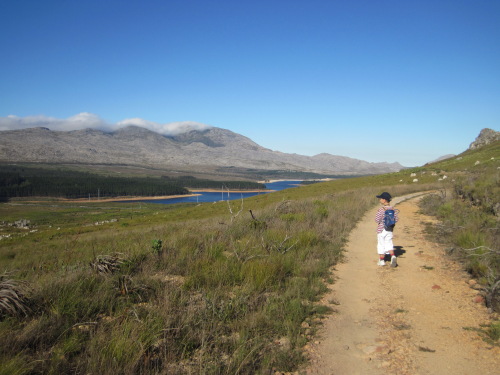 It was still relatively early and it was not long before we were winding our way up Helderberg College Road to finally make sure the Long-crested Eagle found its way onto my Western Cape list.  It has been resident at the College for an embarrassingly long time and I decided that I had to get it before it decided to fly back to where it came from.  As I had commented in last week’s blog, the world has an equilibrium and it is inevitable that everything reverts to the mean.

We would soon prove this theory as we arrived at the gates of the school only to find that the devastating fire in the Helderberg Nature Reserve had forced the closure of the school and ruined any chance we would have of finding the Eagle.  In the greater scheme of things we were happy to be turned away as the residents had far more important things to worry about than an errant bird.  I was only to read in the paper later this morning that houses and hotels were razed to the ground by the fire that swept through Somerset West yesterday.

Our trip home was interrupted by a visit to Steers and a celebratory burger and once at home, while updating Tommy’s list in front of my computer we were treated to a flyby of two African Harrier Hawks which fortunately found their way onto my memory card!! 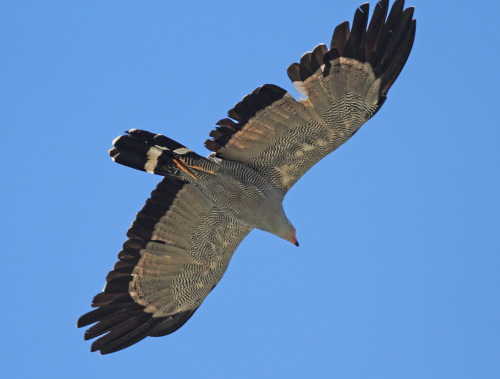 So, perhaps my friend was right.  I think I do have writer’s diarrhoea – this was meant to be short but if you have got this far you will have realised that I deceived you.

5 Responses to Battered by the wind, but successful