After a few months of accumulating Tommy’s list it has become more difficult to venture out and add easy lifers.  Although it is still in its infancy a concentration of birding in the Western and Southern Cape means that it is harder for me to continue being “dad of the year” by serving up easy ticks.  I had noticed the other day, though, that Tommy seemed to be missing all of the Southern African marine cormorants from his list (Cape, Crowned and Bank).  It does seem a little shameful that Cape was not ticked and Crowned is a bit of a blight on my job as a list accumulator for Tommy but Bank Cormorant has become more difficult these days and it was with a small amount of hope for a full set when we set out this morning.

What also needs to be mentioned to place today’s birding in context is the fact that our birding has needed to be squeezed in between our ever-filling “beginning of the year” social calendar.  Jeanie does not let me rest up after a holiday of social engagements and this weekend was no different.  Last night we joined friends of ours for a 40th birthday which we knew would never end early and we had a 2 year old birthday at 10am.  This meant we had a window of about 1 hour to achieve our rather optimistic target.

It has to be said that finding the cormorants this morning did not rate up there with the most hard core of birding expeditions.  In our quest this morning I never raised much of a sweat (which, for me, is no mean feat), the heart rate stayed pretty low and there was even the possibility of an ice cream along the foreshore had we not run out of time and risked ex-communication from Jeanie had we arrived late for the birthday party.

The comfort of this expedition also meant that I was delighted to take along my middle son, Adam, who has also shown great interest in our birding quests.  The chances of him asking, “when are we going home” are considerably reduced when the length of the birding trip is only 45 minutes.  To his credit he showed great endurance this morning and perhaps we can stretch it to an hour next time we head out.

We rolled out of the house at 8:45 (probably the latest start I have ever had for a birding trip of any consequence) and we were parked on a bench looking at the azure waters of Table Bay at around 9am.  The cormorants criss-crossed in front of us before long and we had Cape in the bag (yip, not exactly wowing anyone with that) but I was quite keen to find the Sabine’s Gulls in the Bay that occasionally turn up at this time of year.  The summer South Easter generally blows pretty hard in mid-summer and Table Bay affords the Gulls a bit of serenity in between their pelagic foraging so, it has become a reasonably reliable spot for them (I ticked my one and only Sabine’s Gull from the beachfront in Table Bay about ten years ago when participating in Birding Big Day).  Despite finding large rafts of Gulls in the bay, the haze was up and there was no way I could turn any of the hundreds of Hartlaub’s Gulls into a Sabine’s.  The wind was uncharacteristically light this morning and may have had an impact on the chances of success.  Unfortunately my failure to find the gulls seemed to dominate my rating at the end of the morning’s expedition which I thought was a little unfair.  I need to work on my strategy a bit and make sure I do not create any expectations before venturing out but I do feel Tommy is better served if he is prepared for the species we are likely (or hopefully going) to encounter.

So, the three of us sat and ticked the few birds that were foraging along the shoreline and before long Adam was chasing the Oystercatchers and Tommy was showing just a little disappointment in the fact that we only had the Cape Cormorant to show for our efforts.   It was time for the “ace up my sleeve”. 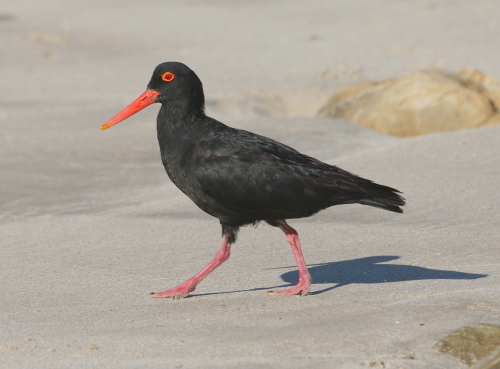 I have always considered the Radisson Hotel in the corner of Greenpoint near the Waterfront to be a rather incongruous birding spot.  I can’t imagine it being listed in any of the birdfinders as it just seems wrong that it should produce birds of any consequence when considering that the average clientele is more likely to speak German and is unlikely to be bothered by the fact that a Bank Cormorant has no gular patch.

However, having said that I knew it would almost certainly produce Crowned Cormorant and there was a teeny weenie possibility of a Bank Cormorant although I was not particularly hopeful.  We cautiously approached the boomed entrance telling the guard we were visiting for a cup of coffee (I somehow thought that he was unlikely to let us in if I had told him we were twitching a Bank Cormorant) which raised a query from Tommy as to why I had lied to a man of authority as he knew quite well that I have never ever drunk a cup of coffee in my life, and then we surreptitiously ambled past all the breakfast tables and made our way for the breakwater.

Common Terns, Hartlaub’s Gulls, African Black Oystercatchers and White-breasted Cormorants littered the jetties and ultimately I found a single Crowned Cormorant resting on the edge of a dolos (interestingly Wikipedia tells us that a dolos is a concrete block in a complex geometric shape weighing up to 20 tons, used in great numbers to protect harbour walls from the erosive force of ocean waves. Even more “proudly South African” is the fact that they were developed in East London in 1963 and are found in millions around the world) towards the end of the pier.  Hundreds of Cape Cormorants flew by and I diligently searched each one for a white back with no luck.  I noticed there were two cormorants roosting at the very end of the breakwater and noted that the one was just a little chunkier than the other.  The glare off the harbor water prevented a decent view but as is the case with much urban birding the birds were particularly accommodating and we walked right up to them and were able to determine that the one had a pale eye and lacked the orange gular patch of the bird alongside – Bank Cormorant!! 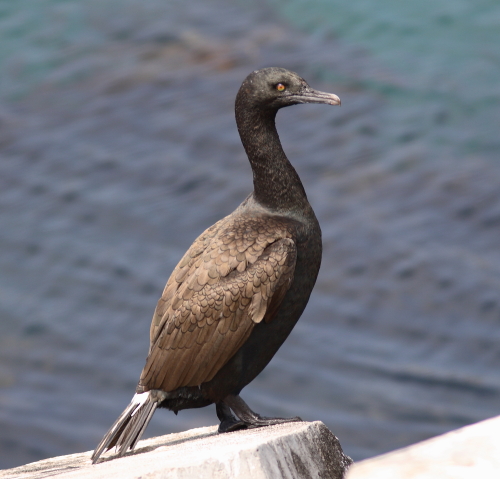 Alternately lifting Tommy and Adam on to my shoulder to give them good views over the edge of one of the dollosks ensured we were all happy to tick this increasingly scarce endemic before we high-tailed it back along the breakwater to make sure we got to the birthday party on time.  As we were scampering back to the car I felt it was a good moment to puff my chest a little and asked Tommy whether he was pleased that we got a clean sweep of the marine cormorants.  You are probably not going to be surprised at his response: “yes, not bad, but when can we come back when the South Easter is blowing to make sure we get the Sabine’s Gulls?”