Saving the best for last

When we set out for our road trip, over a week previously, one of the kids had asked me where we were going to be for our last nights of our trip. I had chastised them as I always hate thinking about the last days of a holiday when we were only just setting out. I always say to them that they must enjoy the holiday ahead rather than worrying about the end.

Sadly, though, we were approaching the end of our journey and I was a tiny bit apprehensive. I had picked Ndumo for its wealth of birdlife and, to be frank, I had picked Mtunzini for much the same reason. In fact, it was probably the only reason for me. I had been here a million years before, and I knew full well that the birding was great, but I wasn’t sure if it would be a suitable location for the non-birders. Sure, there was a beach nearby and it appeared as if our B&B was highly recommended on Trip Advisor and, yes, there appeared to be strong evidence that the toilets were in working order, but would this be enough to satisfy the masses?

We arrived at One on Healy, which was our guest house situated right at the entrance to the town, overlooking the coastal bush, the village and the Indian Ocean beyond.

Within five minutes of arriving I was at ease, as the guest house was perfect and so was its owner who welcomed us as though we were long lost family. My parents and Jeanie were suddenly happy to be in this little coastal town and I could start focusing on our bird list. 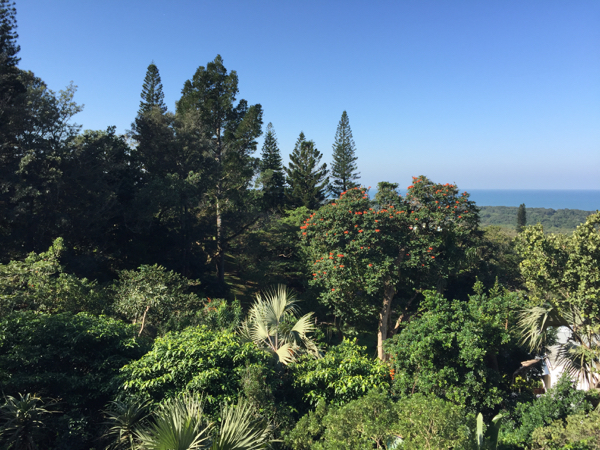 The view from One on Healy

Mtunzini is best known for a few very specific birds.

Firstly, it is one of the few places in Southern Africa that supports a breeding population of the striking Palm-nut Vulture. It also is home to the Umlalazi River and its lagoon and mangrove swamp that is the best place in the country for Mangrove Kingfisher and African Finfoot. And, finally, Ongoye Forest is no more than 30 minutes away which is the only place in the country and, just about the world, where you can find Green Barbet. I needed a photo of all four of those birds and the boys needed each one as a lifer.  But, even more than that, the town and the surrounding areas were alive with birding possibilities and I suddenly realized that we would just not have enough time to cover everything.

As much as the town was seemingly satisfactory for the non-birders, we had a barge trip on the river organized for the afternoon of our arrival that would hopefully add a few stars to our stay.

Jeanie and I had been cooking our breakfast a week before in the communal cooking area at Ndumo and we struck up a conversation with a fellow camp inhabitant. It turned out that Mike and Penny had retired to Mtunzini and lived in an estate on the northern side of the Umlalazi River and for some reason (which is hard to explain) invited Jeanie and I and the rest of our rather large family to join them on a cruise up and down the river on their barge.

I was excited about the opportunity to get on the river, especially since our bird list required us to get down to the water, but it was even more exciting that we had a booze cruise lined up for the rest of the family.

It was honestly the highlight of our entire trip. The barge was certainly more luxurious than we expected it to be with ample space on a lower and upper deck, a flushing toilet, a small cabin and very civilized table and chairs that had been set out with drinks and snacks of all description. I know Mike and Penny’s hospitality couldn’t control the weather for the afternoon but if they had some degree of say in that matter, then I would have given them six stars. It was a perfect afternoon with no wind and the warm north coast sunshine bathing the river in its light. 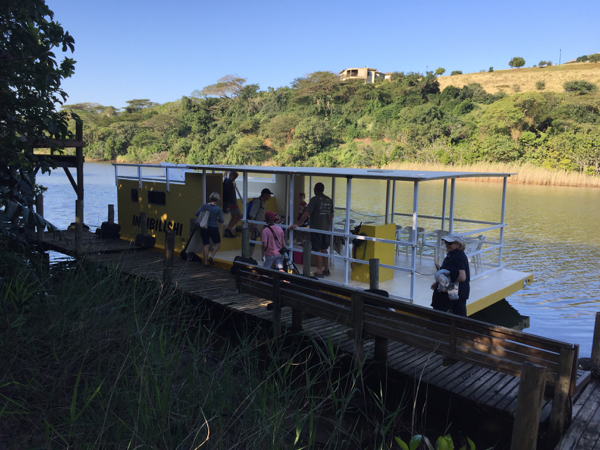 The Five Star Barge on the Umlalazi River

Whilst I spent the three hours on the boat casually listing 50 species on Birdlasser, the rest of the family had their feet up and enjoyed the relaxation and luxury of a first class river cruise. 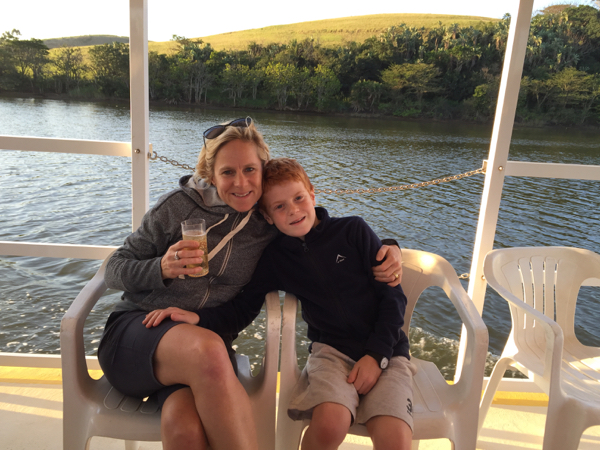 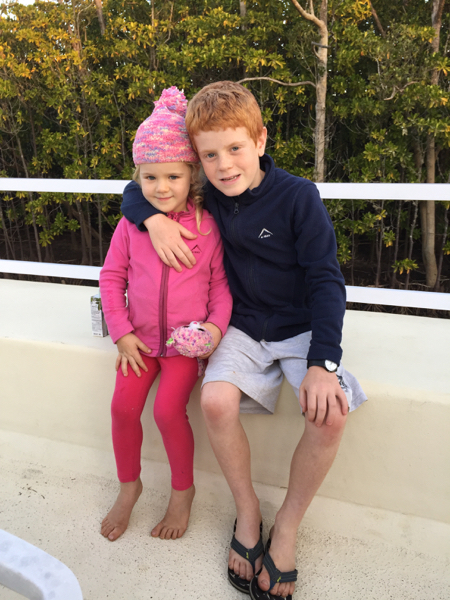 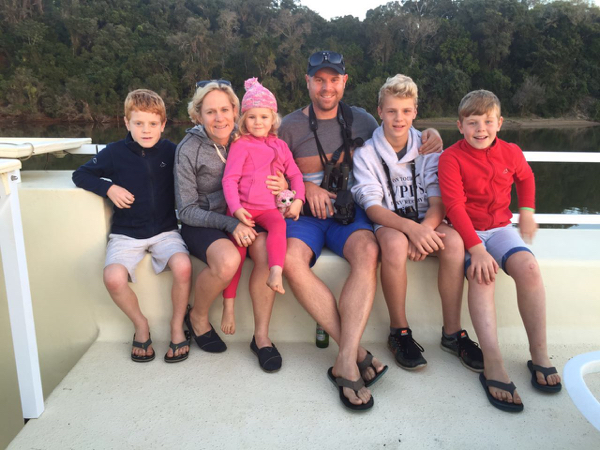 The Buckhams on the barge 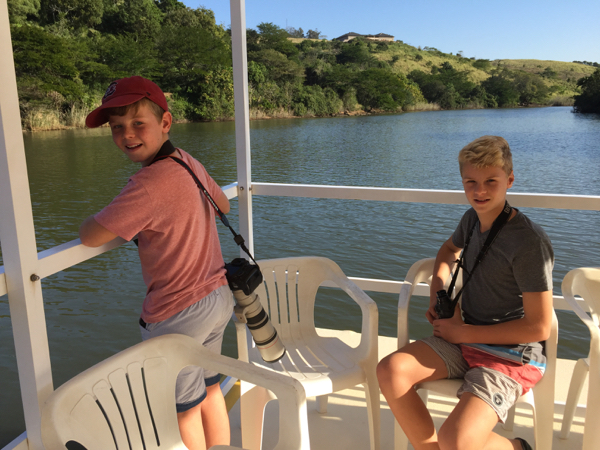 Tommy and Adam on the barge 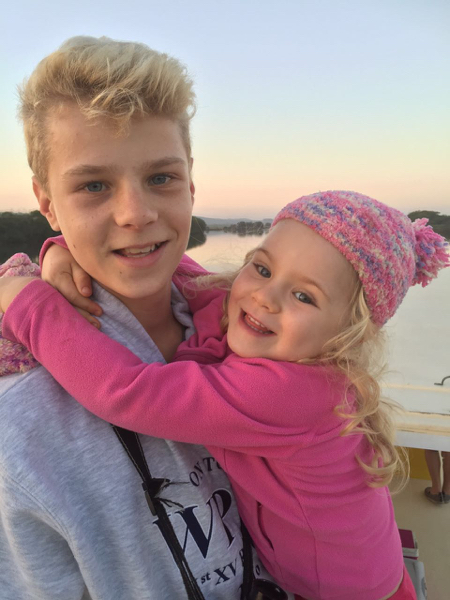 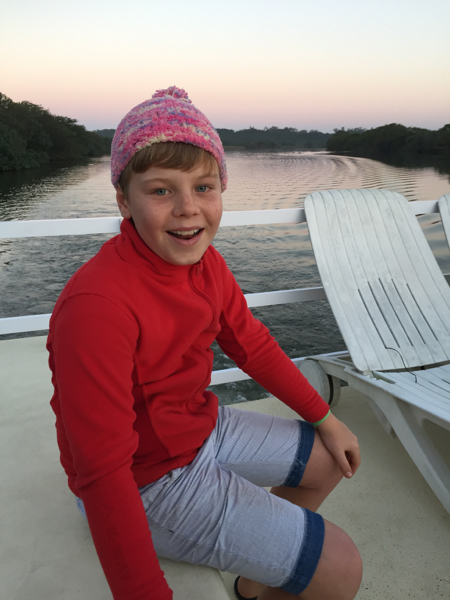 Adam on the barge 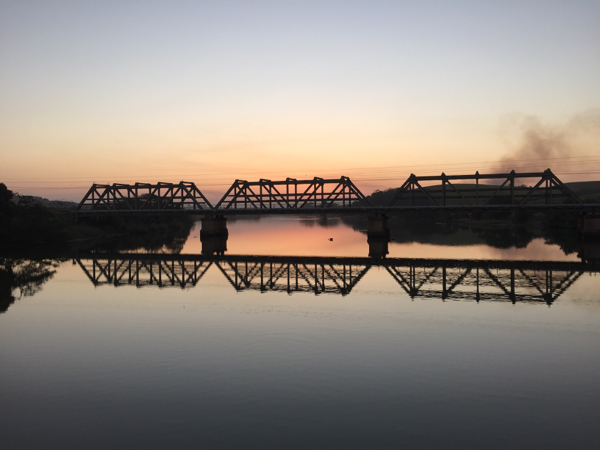 Sunset over the river

The birding was also of the highest class as we ticked our Palm-nut Vulture, Mangrove Kingfisher and African Finfoot within the first hour and then even I could be seen to be kicking up my heels enjoying a cold beverage. 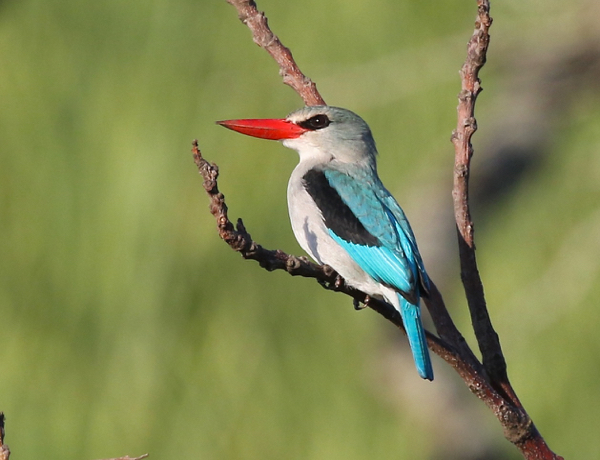 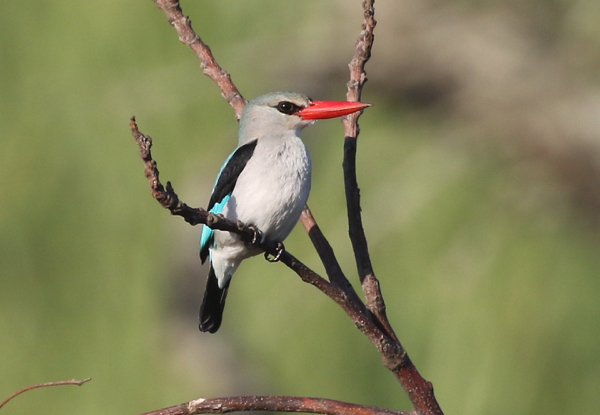 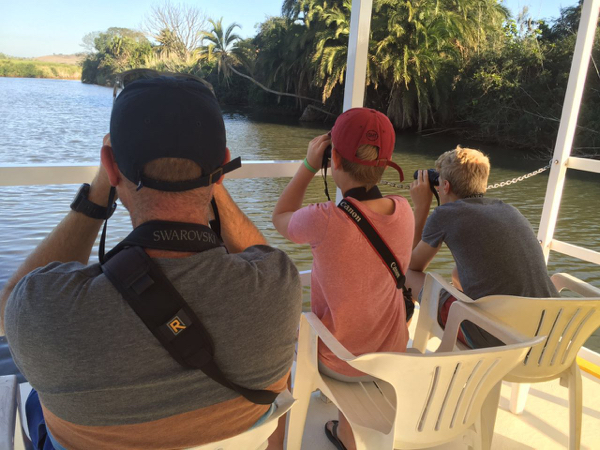 Where is that damn finfoot? 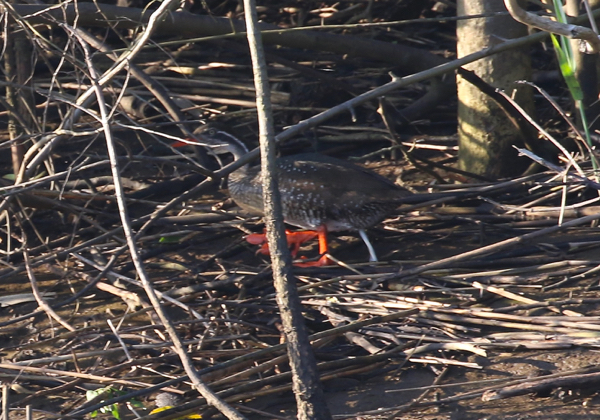 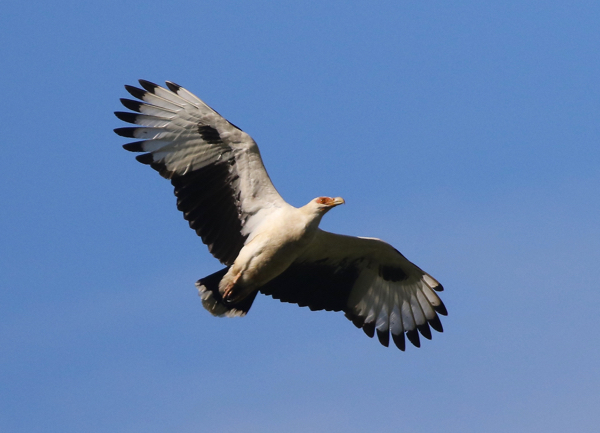 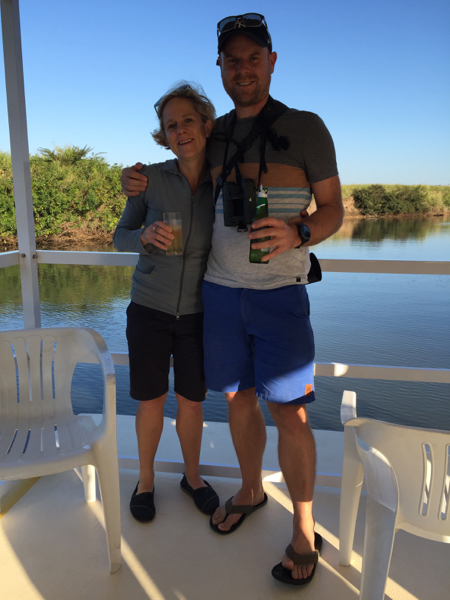 Even I had time for a beer

The kingfisher and the vulture were extremely obliging but we had to work hard to get a camera on to the finfoot. We saw several of them as they swam across the river but, by the time we got close, they had disappeared amongst the dense reeds or riverside foliage.

After a while it didn’t matter about the birds and we got off the boat after the most enjoyable three hours you could imagine.

I didn’t allow the boat trip to lull me into a sense of complacency as we still had some work to do the next day. There were some outstanding birds to see and we had to keep up the pace. In order to make sure we didn’t miss anything I enlisted the help of Sakhamuzi Mhlongo, the legendary guide of the Mtunzini area, to help us with our targets.

We met Saka early on Saturday morning and we were Ongoye bound. Many SA birders that have any interest in a Southern African list will have done a pilgrimage to Ongoye Forest. It is a large expanse of pristine afromontane forest about 25kms inland from Mtunzini and, aside from its beauty, it is the only place in Southern Africa where you can find a Green Barbet. It is certainly not the best looking barbet but birders often don’t care how good a bird looks. If it is hard to find, it is the most beautiful thing in the world.

The mystique of Ongoye Forest prevailed for many years as it is a tricky place to get to. It almost had a Bermuda Triangle-like reputation as I had heard stories of birders trying to find the place but ending up lost and giving up. It was our main reason for enlisting the help of a local but, truth be told, it really wasn’t that difficult.

As we filled up with petrol, shortly after picking up Saka, he knelt down in front of the car at the petrol station and did some mental calculations and then confidently proclaimed that our car passed the clearance test and we would be able to get it right up to the heart of the forest. I reminded him that it was a rental which made our decision even easier. As they say – there are sedans, four wheel drives and then rental cars.

The road to Ongoye is a little convoluted and requires a bit of bumping up and down, before heading up a road into the reserve itself. We negotiated the deep river crossing with our high clearance vehicle and then we were good to go on the concrete strips that are a new addition since I was in the forest 15 years previously.

I was scared to ask Saka what his barbet hit rate was, but somehow I suspected that he very seldom disappoints his clients. And that was consistent with our experience. Within about 10 minutes we had seen our bird and there was a great amount of relief for all of us. I guess these guides have a pretty stressful time of it trying to make sure their clients get their targets, so it was a silent sigh of relief from Saka as well as soon as our quarry was under the belt. What was even better was the fact that we managed to find a feeding party of them on top of a relatively small tree, and we had amazing views as they fed on the berries of the fruiting tree. 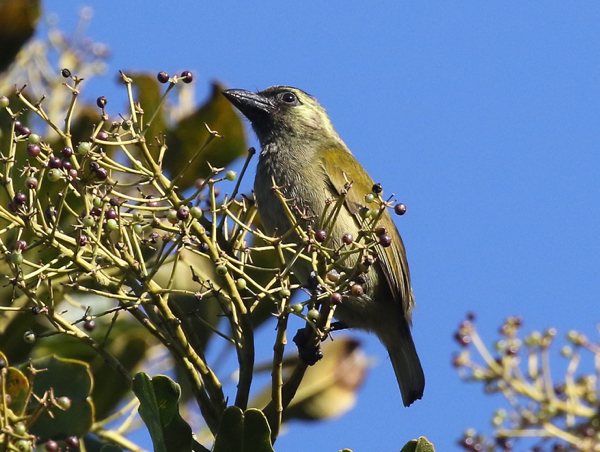 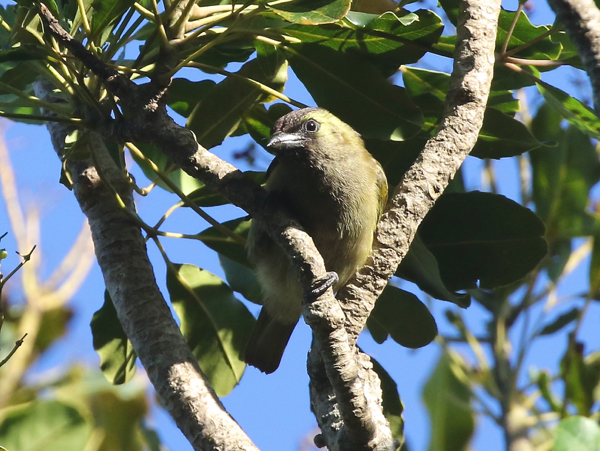 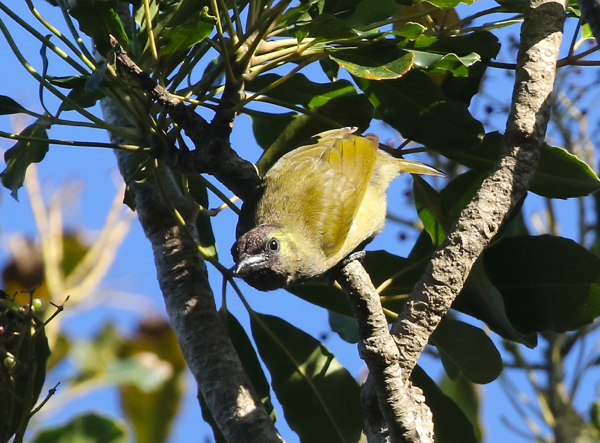 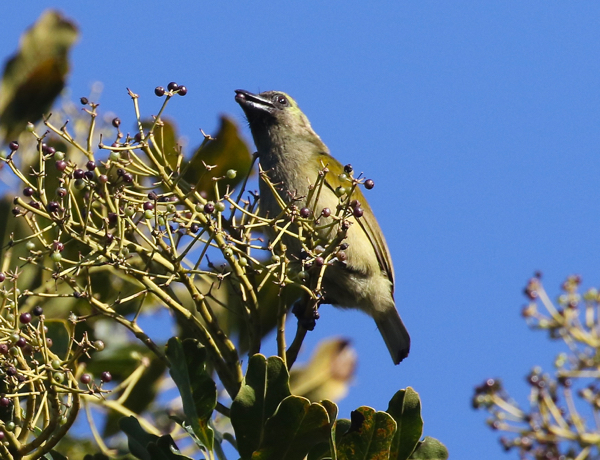 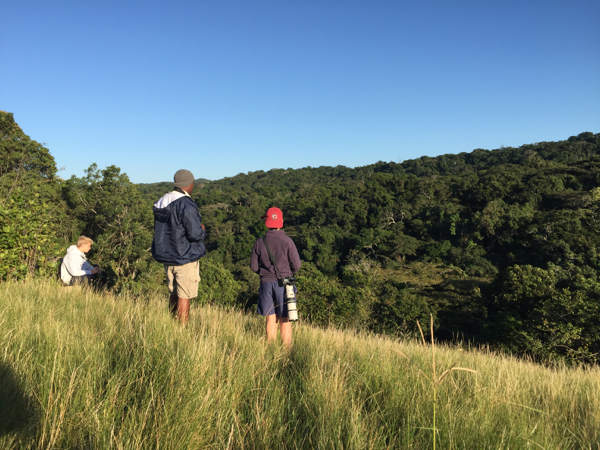 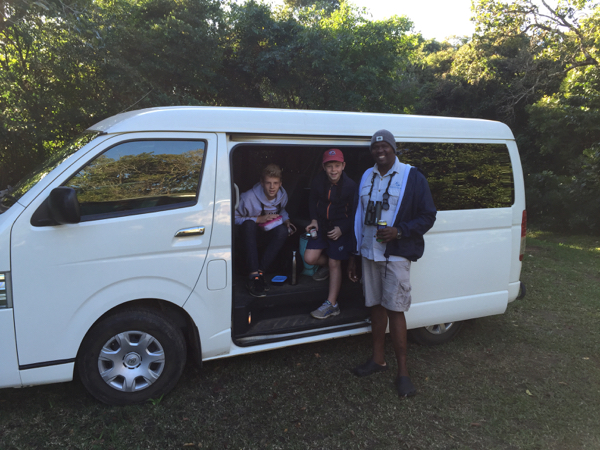 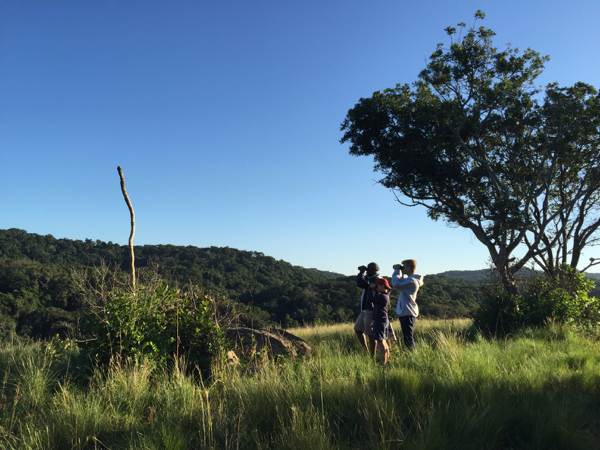 We had other good birds along the way which included Yellow-streaked Greenbul and Striped Pipit and so with our target under the belt so early we returned to Mtunzini for a few other birds. 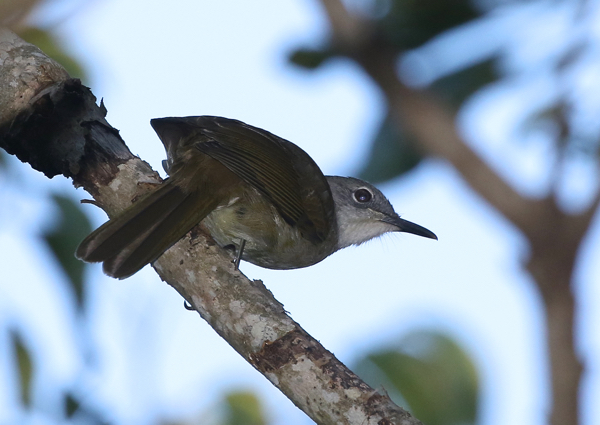 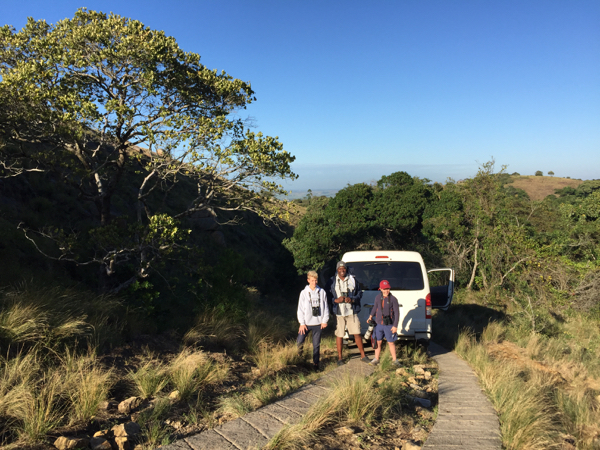 On our way out stopping for a Striped Pipit 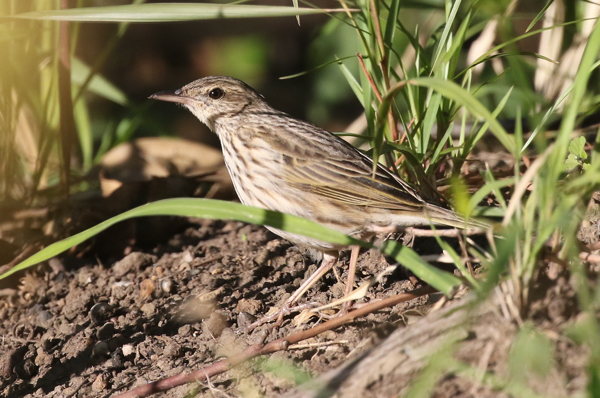 The rest of our morning included a few other lively spots where we added a few more vultures, Green Twinspots and a Spotted Ground-thrush and by the time lunchtime arrived we had sated our birding needs. 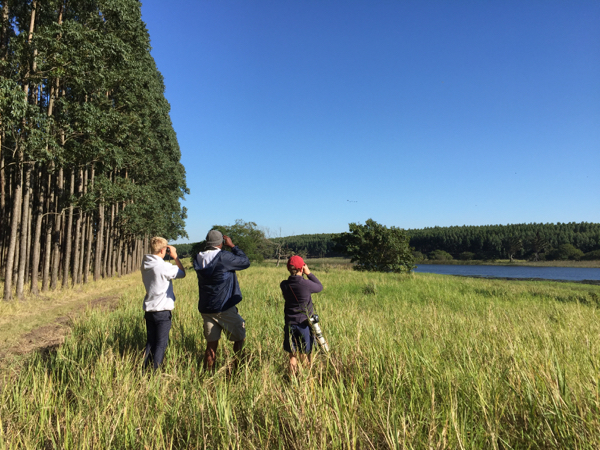 Well, birding needs are never really sated and so we organized a further trip down to Amatikulu in the afternoon. Saka’s home is situated just outside the reserve and so we agreed to pick him up to nail a few more species on our last afternoon before heading home. We needed that one last fix before depression of normality returned.

Our timing was poor.

As we were about to set off from Mtunzini, the clouds had moved over and a light rain was spitting. I was not too fazed but I then got an SMS from Saka to say it was bucketing at Amatikulu. Despite the miserable weather we pressed ahead anyway and after a frustrating drive, where we got last due to garmin errors, we arrived to fetch Saka.

I always say to the boys that no birding trip is ever wasted no matter how lousy the sightings are, but I would have to say that it was probably as close to being a wasted birding trip as I have ever had. It rained solidly for the two hours that we traipsed around Amatikulu looking for our two target birds (Grey Waxbill and Swamp Nightjar) and at 4:30 all four of us were sopping wet and we had virtually zero birds to show for our efforts (never mind the far-fetched targets). It was also probably the place where Adam got bitten by a tick that resulted in him getting tick bite fever a week later. We also returned home with a new load of dirty clothes for Jeanie to fret about. 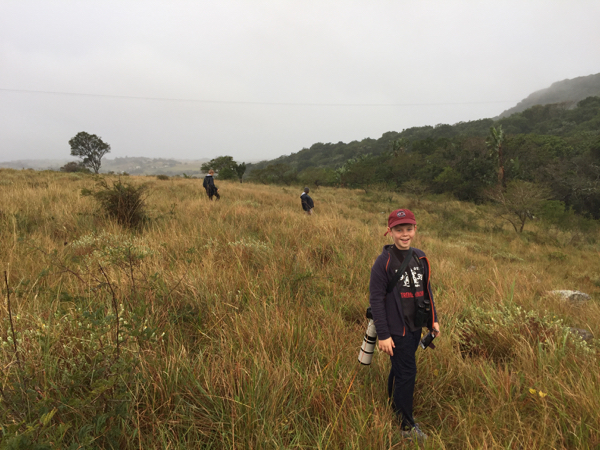 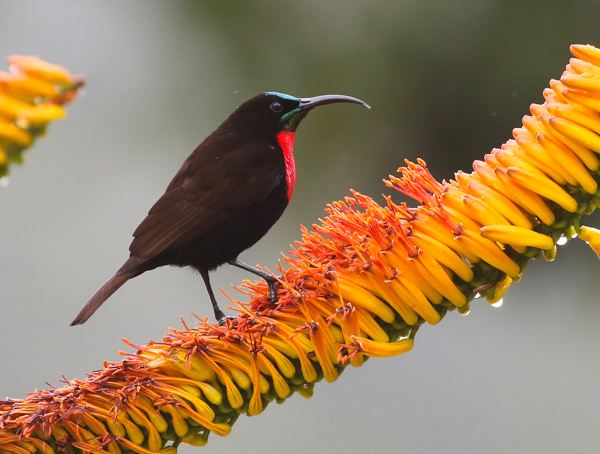 Scarlet-chested Sunbird (just about the only bird we saw)

It wasn’t the best way to finish the trip from a birding point of view,but we were consoled by our best meal of the trip, which was completely unexpected. For those that happen to be needing a good value meal in Mtunzini you cannot do better than the Fat Cat restaurant.

So, the trip had come to an end far too soon. I guess they rattle on so quickly because we cram so much into them. It was a road trip in true Buckham style with a lot of places ticked off, picnic lunches in the middle of nowhere, lots of birds, good laughs (and a few tantrums), a few loads of washing, hikes, runs and one or two swims and an overall bonding experience for our family.

We finished on a total list of 229 birds which was more than we expected given the time of year. We feel as if we have covered Zululand quite well now and we will set our sights on something different next year.