The road trip begins in Eshowe

It feels like absolute ages since I have written a blog or some kind of trip report. It doesn’t mean that I haven’t done any decent birding in the last few months, but is perhaps more symptomatic of the diminishing time that I have had available to do so. Yes, work has been beyond demanding and so my relaxed coffee mornings, typing a few thoughts before hitting the desk, have been reduced to virtually zero.

A road trip with the family, however, is always worth documenting, if for no other reason than for having some kind of record for posterity. Our Buckham Family road trips are my favourite kinds of holidays and I always want some way to remember them when I am old and decrepit.

This year’s trip was yet another foray into Zululand. We touched on some of the areas three years back, but it was definitely time to return. Jeanie was in charge of the itinerary while I had my nose to the grindstone (not that she didn’t, but she is just a lot more efficient than I am) but as long as we made our way as far north as Ndumo, I would be happy with her planning. It had been at least 15 years since I had last visited one of my favourite places on the planet and I felt it was about time to go back.

Our travelling party was the family of six and we had also managed to convince my parents to join us as well. We have found Granny Pam and Grandpa Brian to be excellent travelling companions.

So, it was a whirlwind week of work getting our financial results out before we departed Cape Town International on a bitterly cold winter’s morning as a cold front battered the Peninsula. It was with some relief that we touched down in Durban with the local temperature touching 29 degrees. The jeans came off in the parking lot and were happily replaced by a pair of shorts and slops.

Jean poked fun at me in that we visited a birding spot within two hours of landing in Durban, but I was ready with a quick retort in noting that her and my mother had managed to clean out the King Shaka Woolies within 30 minutes of getting off the plane.

The birding spot I refer to was the Sappi Stanger hide just outside Kwadukuzu (previously known as Stanger) about 30 minutes north of the airport. It is a legendary birding spot in summer, which most birders will know well, as it was the site of a number of Spotted Crakes in the “2016 Spotted Crake Irruption”. Despite it being mid-winter I felt it was necessary to pay it a visit and we weren’t disappointed. There was birdlife everywhere and we even managed to get the non-birders into the hide, which was probably more a result of it being the site of our picnic lunch rather than the appeal of the birds. 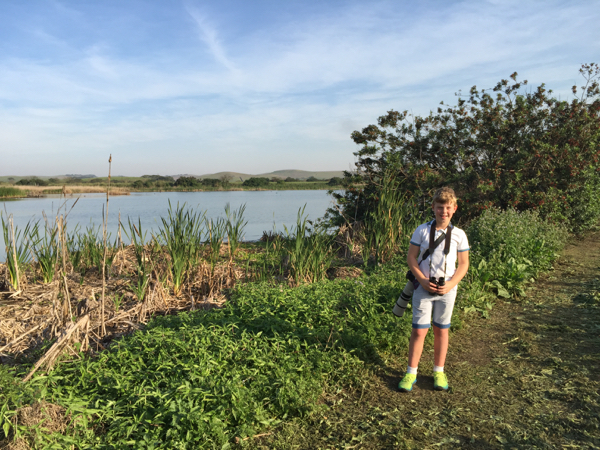 No time to waste at Sappi Stanger

Our first night was spent in the very comfortable Inn Zululand in Eshowe, about five minutes walk from the Dlinza board walk. We managed to avoid the Spur for dinner and instead found ourselves at the fort, which had one of the most pleasant dinner surprises. We were to learn that the restaurant is only open on one Friday night per month and we were lucky enough to time our visit appropriately. The only other clientele were the owners of the restaurant but the paucity of diners had nothing to do with the quality of the food, as it was excellent. Bunny Chow was on the menu and when in KZN, eat what the locals eat.

My sole purpose for making a stop in Eshowe was to get a photo of a Spotted Ground-thrush. I had seen only one previously, about fifteen years ago, and I certainly had never photographed one. We had a couple of hours of birding time available before heading north to Ndumo so we set our alarms and we were up at first light to take a walk into the Dlinza Forest for the thrush. Tommy and Adam had never seen one but the thought of an early start for Tommy was too much so it was just Adam and I.

We knew the weather was moving up the coast but I was not prepared for the single digit temperatures that cut through us as we stepped outside. It was absolutely freezing and so it was back to jeans and jackets.

In short the birding was miserable and after about two hours of wandering around Dlinza Forest we had atlassed about 20 species and I was feeling bleak about our thrush prospects.

Fortunately I had Adam with me as his eyes are far keener than mine and as we arrived near the Bishop’s Seat picnic site he spotted the thrush (pun very much intended) quietly hopping amongst the leaf litter. It was a great relief to see it but the process of photographing it was pretty involved. We stalked it quietly and managed to get quite close, but the gloom in the forest was so poor that it was almost impossible to focus on it. Eventually we both sat down in a section of the forest and anticipated the direction in which it was feeding and just waited patiently for it to come to us.

I usually find it frustrating when the birding is so quiet but on this occasion it really worked in our favour. If it had been a bright sunny morning we would have been charging around trying to find as many birds as we could and we may not have enjoyed our thrush experience quite this much. But, with nothing much else going on I was very happy to sit and wait for just the right moment and we were rewarded better than I had ever expected. It eventually hopped towards us until it was no more than three or four metres away and I was able to get that photo that I had always imagined I would be lucky to get. 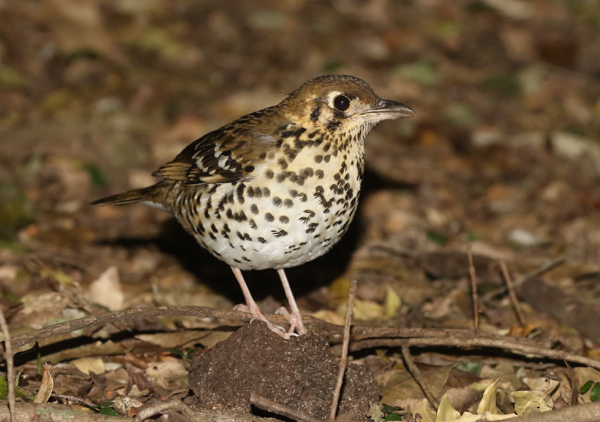 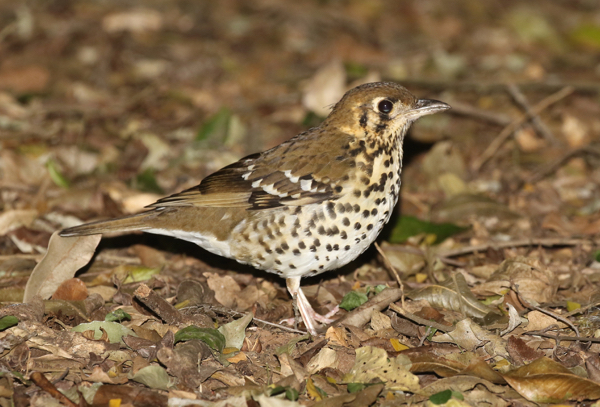 We charged back to the entrance to the reserve and met the rest of the family for a quick trip up to the top of the tower overlooking the forest but dissension set in quickly with the temperature hovering around eight degrees and the wind whistling through the metal structure. There was not a bird in sight and warm cup of coffee and bacon and eggs was suddenly far more appealing than standing on top of the tower.

As an aside, we have got into the very snobby habit of taking our Nespresso coffee machine with us, wherever we go.  We can’t seem to do without that first cup of coffee every morning and so it is worth the effort of cramming it into various well padded bags.  On this occasion, though, the machine was cozily packed in a robust cooler bag and put onto the plane but, despite the careful packing, it was broken when we got to the other side.  We spent a frantic 20 minutes cobbling it back together again on our first morning in Eshowe.  I am relieved to tell you that, even though its insides were basically hanging out for the duration of the trip, it still managed to produce coffee worth drinking. 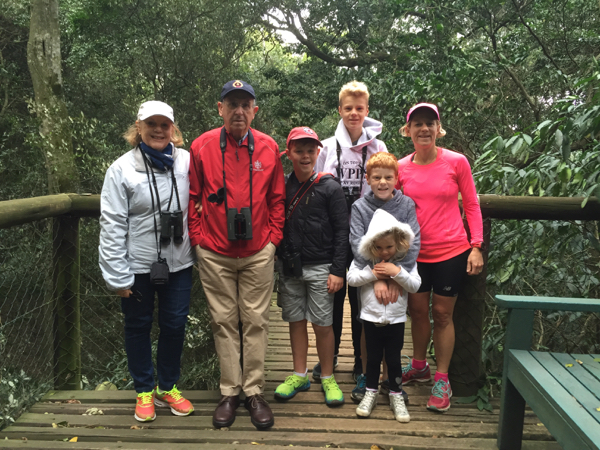 Freezing cold on the boardwalk 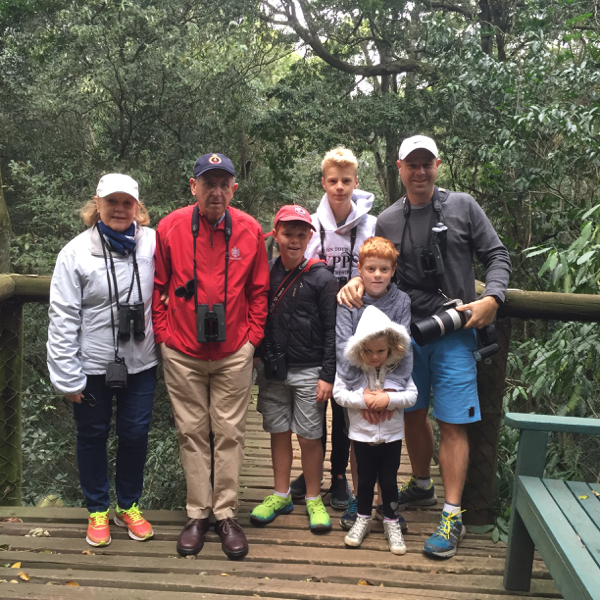 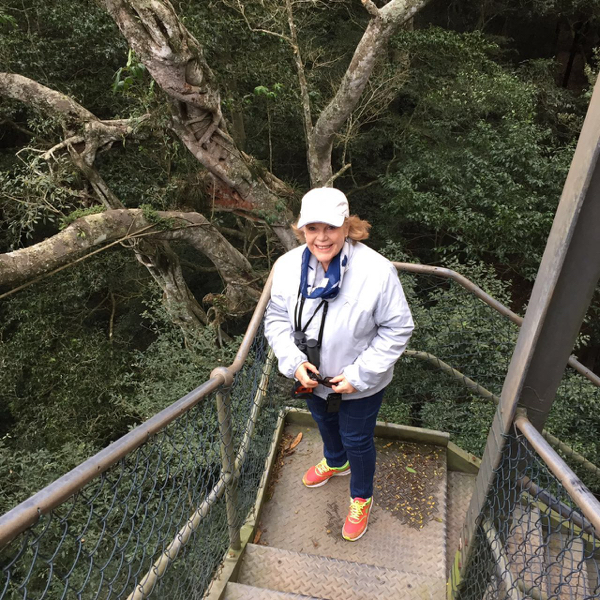 Granny Pam on the boardwalk tower 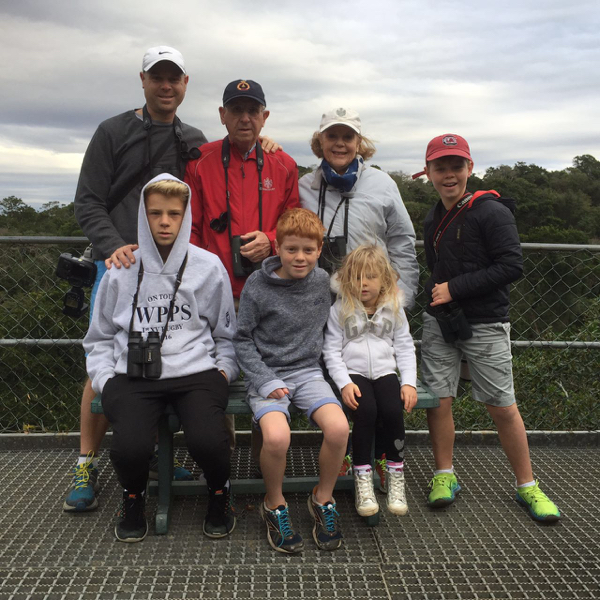 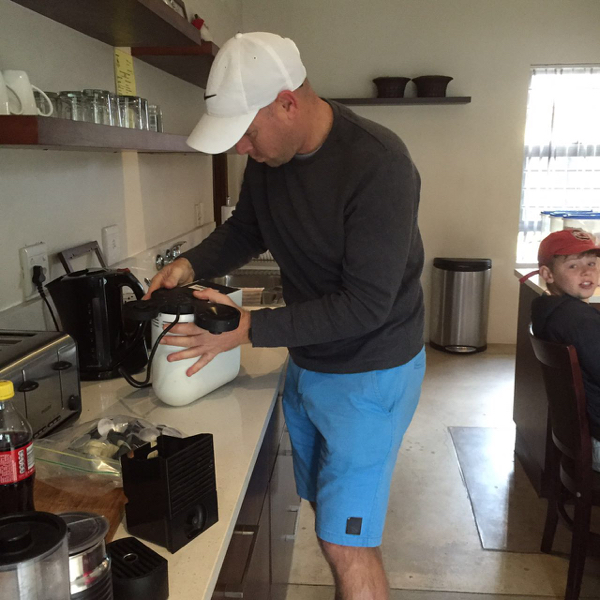 The damn coffee machine is broken on day one

Our visit to Eshowe was brief and unfortunately it coincided with appalling weather conditions. We had had the best of the fine dining of the small town and, after Jeanie had spent some of her morning battling the crowds at the local Spar, it was firmly decided that it was unlikely that she would ever return. It has become a chaotic little town which seems to be the gateway from the N2 towards the rural areas a little inland and it just hasn’t seemed to retain its quaint feel as I had remembered it. I am sure I will return one day, but that may be further into the future now that I have my Spotted Ground-thrush photograph.