The December holidays are always a busy time for the Buckham family.  We have always holidayed with the in-laws at St Francis Bay and while the kids were small it was always a negotiation to get out and do some birding.  As newish fathers with birding as a habit (or curse) the line that we tread is a very fine one.  Most of our wives are generally inclined to set a rather precipitous trap and it usually takes the form of letting us decide when it is okay for us to head out at the crack of dawn to do some “valuable atlassing for the good of furthering our knowledge of the distribution, diversity and wealth of South African birds”.  The simple request to head out early and miss the morning dressing, feeding and suntan cream lathering episode is usually met with “go if you would like to”.  After attempting it for three mornings in a row the decision is no longer ours…

This holiday seemed to be a little different.  Tommy and I had recently returned from our Golden Pipit twitch and with the other two boys getting a little older and more independent it allowed for a little more freedom when heading out for some atlassing.

St Francis Bay is a spectacular area for atlassing.  It is hard to believe that one would say this but the pentad that lies to the north west of the town itself (3405_2445) has the highest diversity of any pentad that I have atlassed.  This is obviously a subjective perspective with there being no doubt that there are many pentads in the north eastern reaches of South Africa providing greater diversity but 3405_2445 gave me my highest species count in the two hour protocol period.  I atlassed the pentad twice in the two weeks we were at St Francis and I managed counts of 115 and 118 species respectively.  In addition to the high overall count I blitzed the pentad on one overcast morning and came up with a count of 97 species in 2 hours.  It was birding at pace and not for savouring each species but it indicated the enormous diversity of the area.  The Kromme River dominates the pentad with estuarine habitat on the lower reaches of the river and more vegetated slopes higher up river.  The estuarine area is full of waders with Bar-tailed Godwit and Greater Sand Plover being the highlights.  The tern roosts are legendary with historic records of Gull-billed Tern.  A little more down to earth tern viewing includes Caspian, Swift, Sandwich, Common, Little and a little luck and diligence will turn up some Roseates.  A trip up the river is always special with Half-collared Kingfisher reasonably common on the backwaters with Southern Tchagra, Grey Sunbird, Black-bellied Starling and Olive Bush-shrike making up most of the aural highlights. 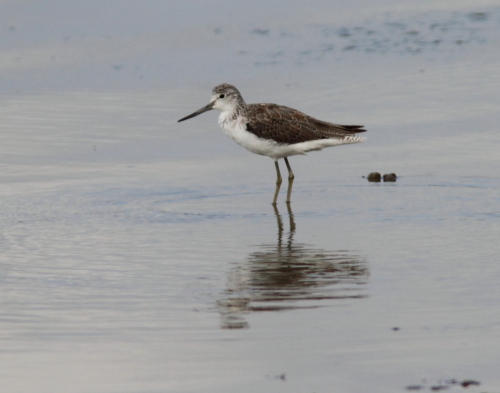 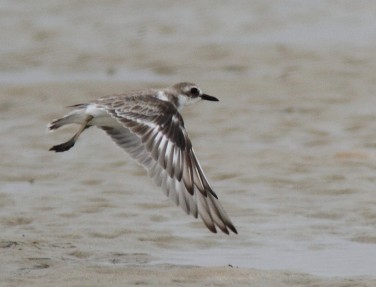 Away from the river there are open farmlands on the network of roads joining St Francis Bay, Oyster Bay and Humansdorp and these provide such wonderful access to some of the best grassland birding you can imagine.  The real special of the area is White-bellied Korhaan (they have taken away our endemic Barrow’s Korhaan and so it is back to sharing it with the other parts of Africa where this bird occurs) and although it is difficult to find in the above-mentioned pentad, the classic spot near Lombardini Game Farm always seems to deliver (a fraction to the east of the pentad in question).  Aside from the Korhaan, other grassland birds include Denham’s Bustard, Rufous-naped Lark, Long-tailed Widowbird and Cape Clapper Lark (more common on some of the rocky ridges). 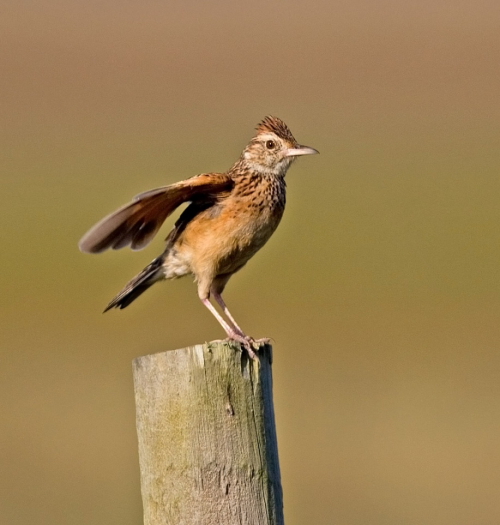 A real mind-bender for me was the transition zone between Grey-backed and Wailing Cisiticola.  It is not a separation that I feel particularly comfortable with and in my mind there are a few of each species in the pentad.  Grey-backed is certainly dominant but when getting slightly away from the fynbos flats and onto the grassier hillsides Wailing seems to take over.  I am still not sure that the habitat is a certainty when separating these two and since their calls are so similar (I have spent a fair deal of time working on these calls in particular and I am yet to feel totally certain) I was left scratching my head on many occasions during the holidays. 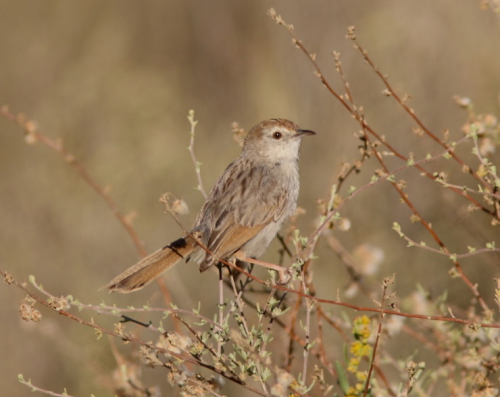 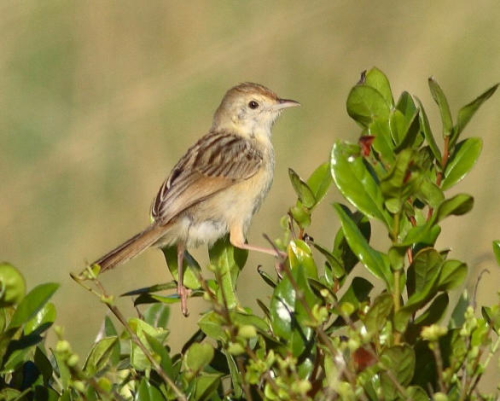 During our time there we picked up some nice birds in the area and it certainly delivered a fair smattering of lifers for Tommy.  On one particular morning we had Amur Falcons and several European Rollers which are by no means common in the area.  Another nice find was a relatively reliable spot for Thick-billed Weaver which seems to be a rather westward range extension.  Ron Searle has spent many years logging species in the area and he found some nesting evidence of the Weavers many years ago. Until this most recent holiday I had not seen them. 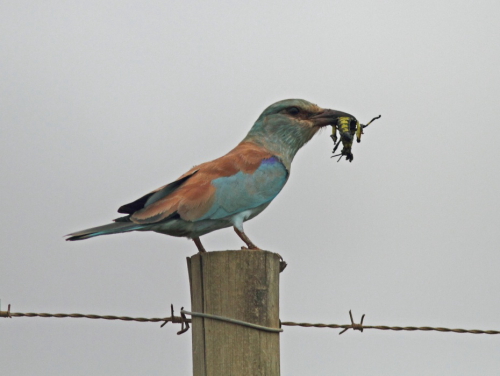 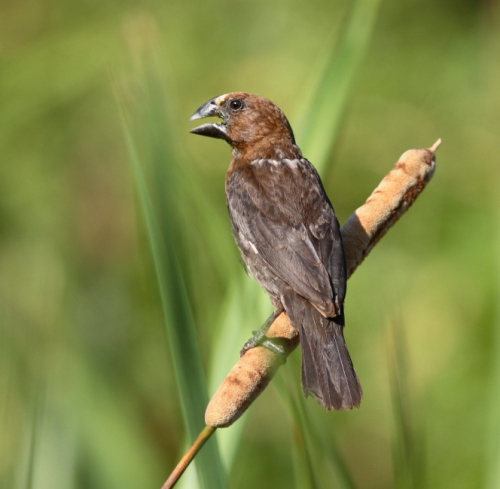 Another remarkably common bird was Knysna Warbler with at least 4 calling males in the pentad alone.  Of course, I never even attempted to clap eyes on one of them as the vegetation seems to be even thicker than what I am used to in the Constantia Green Belts.

As was evident when looking at the gap analysis on the SABAP2 website it seemed that I was not the only one that found 3405_2445 a fun one to do.  It has over 70 cards and represents a pretty deep number of records.  It meant trying to get a little further away to add some value to the atlas project.  We spent some time with Ron Searle which is always rewarding and he let us into a little secret hideaway which promised some excellent birds.  Approximately 20 kilometres west of St Francis Bay was a pentad with some indigenous forest and it needed a little more investigation.  It certainly did not disappoint with easy sightings of some really good forest birds.  I try to avoid laundry lists but we picked up forest specials such as Narina Trogon, Yellow-throated Woodland Warbler, Blue-mantled Crested-flycatcher, Collared and Grey Sunbird, Scalythroated Honeyguide, Forest Canary, Knysna Woodpecker and Knysna Turaco.  The mixed woodland (mostly alien) and forest verges also produced some excellent birds and was the source of most of the out of range forms that were generated.  There were six in all and included Spotted Flyctacher, Eurasion Golden Oriole, Black Sparrowhawk, Narina Trogon, Brown-backed Honeybird and Yellow-throated Woodland-warbler. 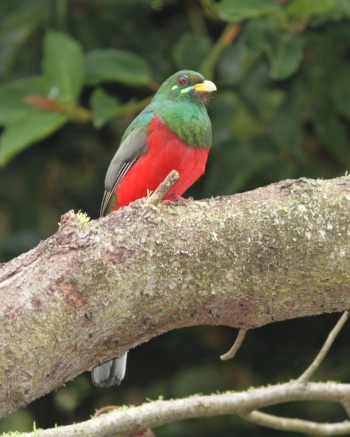 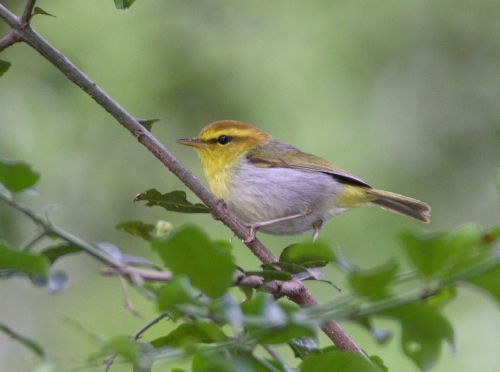 A visit to St Francis Bay is never really complete without a visit to Gamtoos River mouth.  I had not been to this area for a while and had certainly never atlassed there.  It has, unfortunately, changed a little since I had last been there with the persistent drought reducing many of the flooded areas dry and lifeless thereby reducing the species count but it is still a diverse area with lots to offer.  I atlassed the two pentads which included the Gamtoos mouth pentad and the one to the west which includes the Mondplaas farm dams.

The Gamtoos mouth area seldom disappoints but it is still pretty hard work getting to the prime spot and timing the tide can be critically important.  My timing worked out almost okay but given the limited time available I was not able to wait for the full drop in the tide and for the waders to come closer.  Aside from the usual collection of Greenshanks, Ringed Plovers, Curlew Sandpipers and Common Whimbrels I found a small number of Lesser Sand Plovers amongst the larger Greater Sand Plovers (this must be one of the most reliable places in SA for Lesser Sand Plover) as well as a single Eurasian Curlew.  Aside from the waders (which is the undoubted highlight) the Horus Swift colony is worth a stop and I spent a fair deal of time trying to get some photos.  My hit rate was low and there were plenty “habitat” shots that found their way into the trash folder. 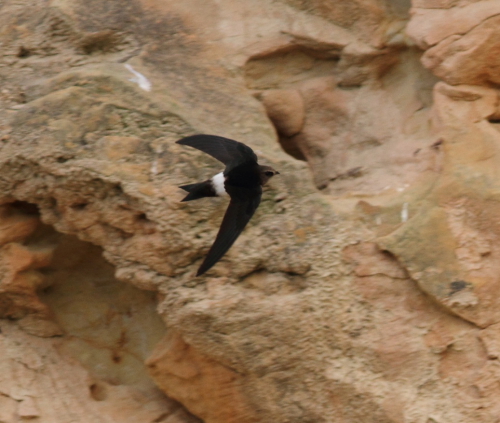 It was always going to be difficult for Tommy and I to beat the incredible experience we had in Pongola but we had some exceptional birding over the holiday and added a fair number of species to his life list.  We returned from the holidays with his count on [insert count] but more than that he seems to have even greater vigor.   He is a very structured child and his mind seems to work in a defined manner.  He has a remarkable memory for someone so young and when doing his list when returning to Cape Town he reminded me of a Plain-backed Pipit we had scoped on a grassy hillside and a singing Brimstone Canary lest I leave it them off his list by mistake.

It is important for me to remember as often as I can that he is still 7 years old and not all birding outings will be fun or appropriate and it may be best to ensure that he remains an enthusiastic child.  The morning I headed out to Gamtoos meant an early start yet again and when I offered him a spot in the car for the excursion he was quite comfortable in telling me that he would prefer to stay at home and play with his cousins.  He was still exceptionally disappointed when I arrived home and he realized that he missed a few lifers.