Each year Mandela Day tends to creep up, and pass by, without me doing anything to recognize or support it. I guess it is mostly due to the fact that it has been on a week day for the last few years and, finding 67 minutes with work stress, school drop-offs and other pressing middle-age engagements, has been difficult.

This year it fell on a Saturday, which meant I had no real excuse.

A few other factors made me decide to make some sort of effort.

The first was hearing Zelda la Grange, Madiba’s former personal assistant, suggesting that it should be a day of doing something that you are passionate about. She was going on some sort of bike rally. Surely that meant I could go birding?

The second factor was that my mother had recently completed knitting 67 beanies for donation to a charity. She started her project almost exactly a year ago and it did not take her 67 minutes or even 67 hours. I suspect it took her 670 hours. Every spare moment she had she was clicking away with her knitting needles. In fact, the many long hours spent in the car on our Namibian road trip gave her that extra impetus to get the job done. If she could knit so many beanies, I could find some time on a Saturday to do something. 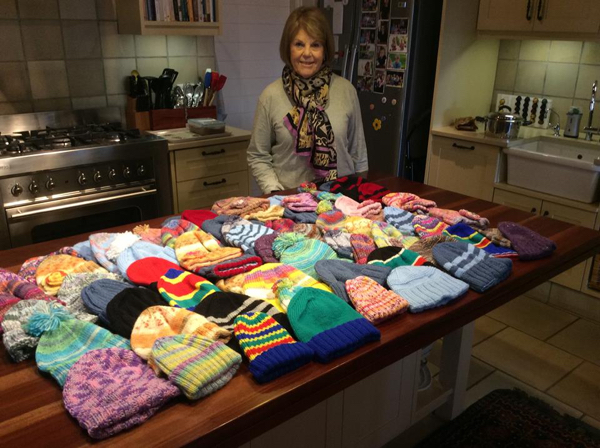 So, I gave it some thought and decided to attempt seeing 67 bird species in my home pentad.

My home pentad (3355_1825) stretches from the eastern slopes of Table Mountain on the western border towards Athlone in the east, is bordered in the north by the Cape Town city bowl and in the south it touches into Wynberg. It includes a surprising variety of habitats with mountain fynbos, Kirstenbosch gardens, Claremont, Newlands and much of Rondebosch, the Rondebosch common and, for a real boost to the list, the Black and Liesbeek Rivers. The Black River, of course, is most well known for the recent Snowy Egret and the spot that the egret chose is an amazing little corner that produces a lot of good birds along the waterway.

I have atlassed my home pentad on many different occasions (around 25 or 30 times) and I have attempted to break 100 species on a few occasions but those attempts covered five days and were during the summer season when migrants are around.

Given that we are in the depths of winter and a huge storm funneled through Cape Town on Friday night, I figured 67 species would be just enough to test us.

I co-opted my two boys, Tommy and Adam, and their good friend Richie, as well as a number of my good friends, who chipped in and helped during the course of the day. Callan, Dave, Saul and Pete were there for a part of the day, while Frans was in it for the long haul. I insisted that my overriding rule was that I had to record the species myself, but I was quite happy taking on help in the form of eyes and ears.

We had an intended late start as Adam had celebrated his birthday the night before, with a sleepover, and so we put out the cake, sang happy birthday and then we were ready to go at 10am. It sounds like a bit of an overconfident start , given that it was so late, but the pentad was a small area and so I was comfortable we had enough time for our objective.

We started in Kirstenbosch Gardens, which is where all good atlas cards should start. It was a surprisingly beautiful morning following the storm, and the birds were out in force. We spent a good two hours criss-crossing the paths and gardens adding species as we walked. 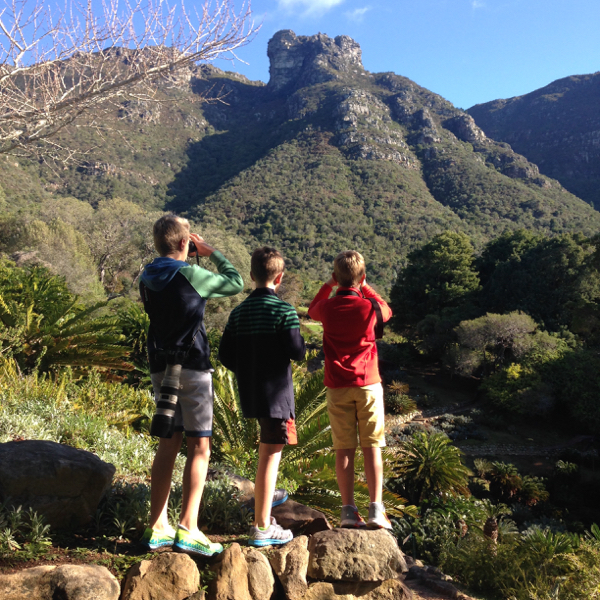 We were fortunate to have Callan in the gardens at the same time, as he was leading a group, and he seemed to be just that much better at finding the good birds. Every 15 minutes my phone would ring and he would say something like “look up towards Devil’s Peak, there is a pair of Rufous-chested Sparrowhawks displaying” and we would look up and there they were. Tick. Another bird.

That happened on a few occasions and certainly assisted in adding a few really good birds. The most valuable one was the Olive Woodpecker that we had to re-enter the gardens for and scramble anxiously across the entire lawn expanse for. It was worth it as it was just where Callan had said it would be.

We also managed a Lemon Dove, which is a bird that always seems to elude me in Kirstenbosch. When you find them, they are usually pretty tame, but it can sometimes be a real pain to find them in the first place.

We wrapped up in Kirstenbosch at around 12:30 as it was time for a rugby break. I had hoped we’d get to around 35 species by the end of our time in the gardens but we were already on 39. 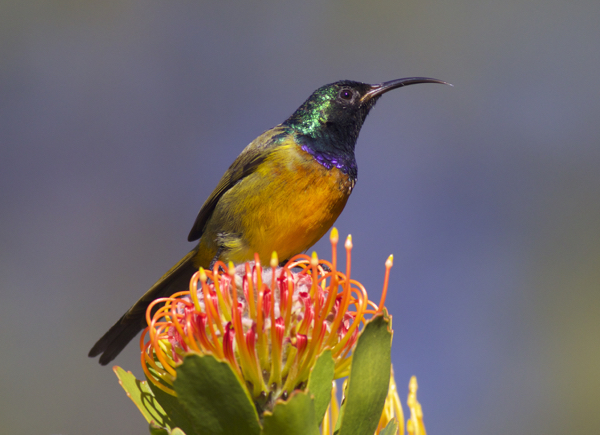 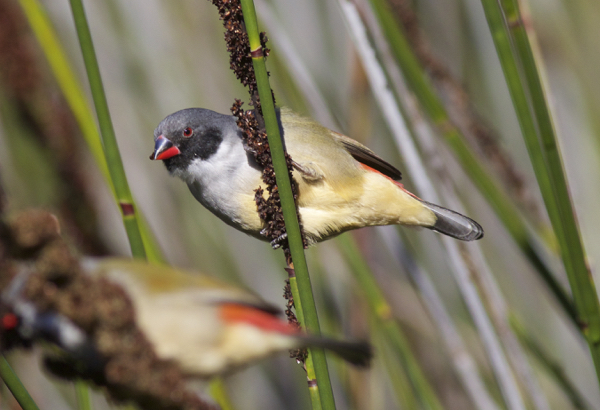 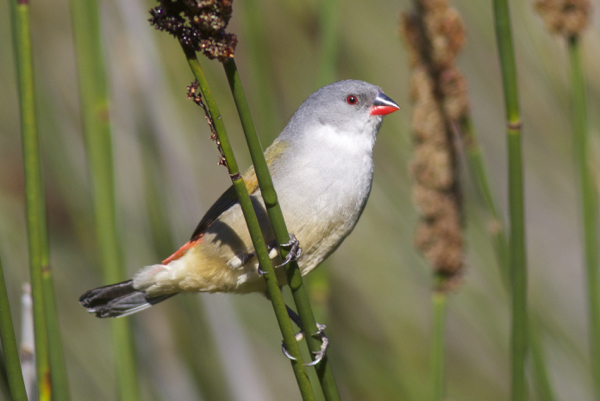 It meant we could settle down and watch the Springboks in good conscience. Perhaps we should have PVR’ed it as we all know what happened to the Boks.

As I said at the time, though, nothing gets you over a sporting disappointment more than a bit of birding.

We headed straight down to the Black River alongside the M5 and began to add an entirely different suite of species. Ducks, coots, moorhens, herons, egrets, ibises, kingfishers, grebes and weavers flew up and down the river and, as I expected, the list advanced at a rapid rate. We quickly reached 65 species and then it was time to do some real hard work. The Black River is a great birding spot but it is, unfortunately, filthy dirty, clotted with mostly solid waste that has pushed down the river, originating in the townships where waste removal is not as easy or effective as we have it in our privileged suburbs.

I handed each of my boys a large black bag and we all set off along the riverbank, filling the bags with bottles and plastic bags. I told the boys to avoid the condom wrappers, of which there were many. Tommy also remarked that there was an unusually large number of old tennis balls and it just shows how many riverside games of cricket must take place in the higher reaches of the river. I can just imagine the unpopular batsman who hits his “six and out” into the river and the game immediately comes to an end as they see their precious tennis ball floating downstream. 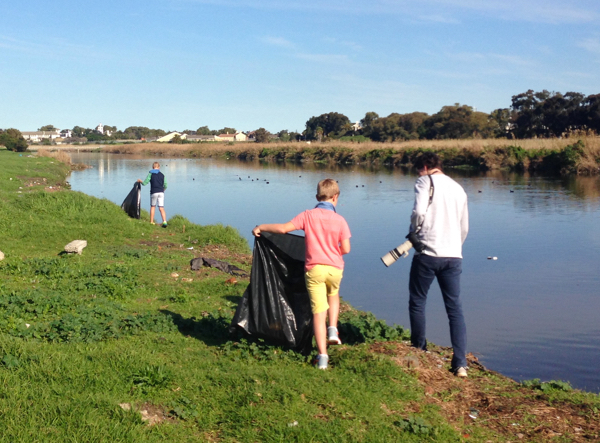 Lots of work to do on the Black River 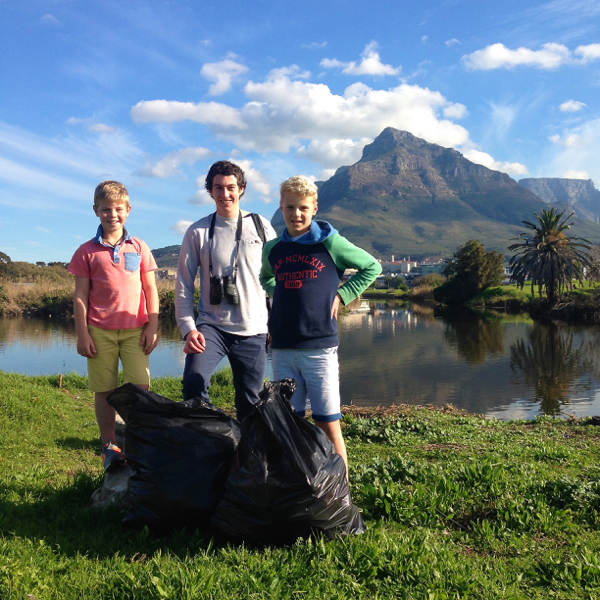 I guess it was appropriate that we reached our 67th species at the same time that we were collecting trash. Dave shouted behind us that a longclaw was about to land near us and so that was number 66 and then, seconds later, he called out a Brown-throated Martin, which was number 67.   It was only 3pm in the afternoon and we had already achieved our target. It had been easier than we expected, but no less exciting to get there. 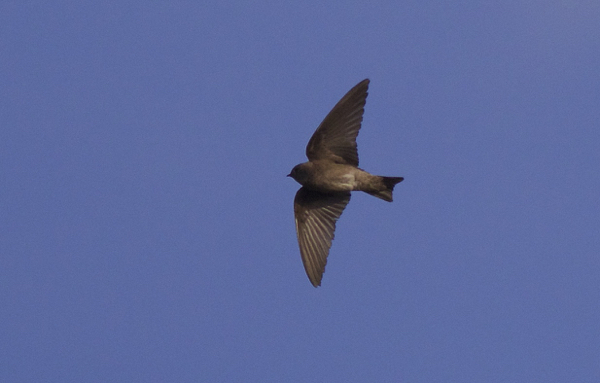 Unfortunately the trash collection alongside the river hardly made a dent. There was just an overwhelming amount of rubbish to contemplate, but we filled a couple of bags and stuck them in the back of the car and decided to continue beyond our 67 species.

As an aside, the most remarkable creature that we saw all day was seen at the Black River. Adam noticed a large animal continually breaking the surface of the river and, quite understandably, he thought it was an otter, which would have been very exciting. After we had a good look at it, and following a bit of debate, we realized that it was actually a Cape Fur Seal. There were so many bizarre things about this sighting. Why a Cape Fur Seal would choose this trash-choked river instead of the open ocean was a mystery. It was also quite far upstream from the sea and would have required a long swim to get there. The way it was breaking the surface appeared as if it was not that well and so perhaps it was disorientated. It was quite sad to see as it ducked and dived in front of us. It certainly took the prize for the most unusual sighting of the day.

Having accelerated quickly to 67 species we moved on to our next spot which was the open horse-riding field just west of Vincent Pallotti hospital. This was my firm favourite spot for adding wetland birds before we started using the Snowy Egret spot. It also appears safer but I would still advise against going there alone. It was a Saturday afternoon, though, and the horse riders were out in full force, making us feel more than safe enough to wander around ticking a few extra birds. We added some good species like Purple Heron, Spotted Thick-knee, African Snipe (I think my first for the pentad), White-faced Duck and Black-crowned Night Heron. We raced to 79 species and, all of a sudden, our list just seemed to be a lot bigger than we had expected. 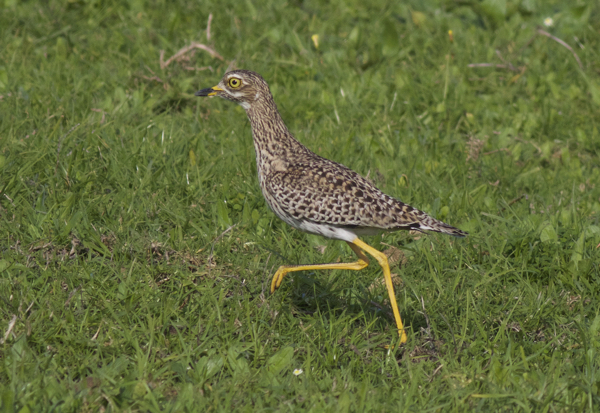 It was getting a bit later but we still were missing some easy Fynbos species. There was also a recent sighting of Cape Rock Thrush on Tafelberg Road and I had never seen one in the pentad. So, we decided to end our day ticking a few extra ones as we watched the sun go down over the city.

Tafelberg Road was packed with people due to the beautiful weather, and Mandela Day coinciding, but eventually we muscled our way past the tourist traffic and reached the end of the road where we took a walk. We failed to locate the Rock-thrush but we still managed a few extra birds in Rock Kestrel, Jackal Buzzard, Cape Sugarbird, Cape Grassbird and plenty of Cape Siskins calling from the cliffs.

And so our day ended on 84 species and we decided that was more than enough. We had had a flavour of a Birding Big Day and makes me think that it may be a nice idea to use that as a theme for BBD later on in the year. It was great to have some good friends and my boys as company and it was remarkable how good the birding in mid-winter can actually be. Although it seemed to be a bit of a selfish Mandela Day as I did what I love most, at least we picked up some trash and submitted some data to the atlas project.